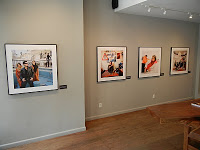 JTF (just the facts): A total of 13 color photographs, framed in black and matted, and hung in the single room gallery and office alcove. The prints are square format archival inkjet prints, and come in two sizes: 36×36 (in editions of 5) and 16×16 (in editions of 10). There are 9 images in the large size and 4 images in the small size in the show, and all of the photographs were made between 2005 and 2009. Each image is accompanied by a text caption provided by the photographer. A monograph of this body of work, entitled Marche Sur Mes Yeaux, was published by Editions Grasset (here) in 2010. (Installation shots at right.). Comments/Context: In recent years, the West’s view of Iran has become increasingly polarized, largely driven by questions of extreme politics and the country’s nuclear aspirations. Photojournalist Paolo Woods has spent the past five years making pictures inside Iran, and his images provide a much more nuanced and complex picture of Iranian society than the stereotypes to which we have become accustomed might otherwise imply.

Nearly every picture in this show tells a story, either of an individual or of a facet of current society embodied by the scene (or both), further embellished by detailed captions providing additional background information. Wood’s photographs touch on women’s rights/roles, youth culture, the influence of the West, Islamic religious traditions, the increasing wealth of the middle class, and the multiplicity of political activity. Along the way, he finds plenty of contradictions and changing behaviors: centerfold nudes woven into high quality Persian carpets, 20-somethings in a mix of fancy Western and Middle Eastern fashions standing in drained swimming pools, regular folks taking classes at the Tehran Laughing School, modern women on the ski slopes, a teenager in his room surrounded by rock posters and graffiti drawings.

Many of these portraits have a formality that implies the cooperation of the sitters, rather than simply snatched moments from passing life. As such, the pictures often seem careful and condensed, their contrasts sharpened through composition. Together, they provide a glimpse of today’s Iran that isn’t so easily summed up, a nation with plenty of conflicting ideas and strong traditions, struggling to merge the old and new into some kind of creative workable equilibrium. Collector’s POV: The prints in this show are priced as follows. The 36×36 prints are $3300 and the 16×16 prints are $1600. Woods’ work has little secondary market history, so gallery retail is likely the only option for interested collectors at this point.

My favorite image in this show was the portrait of Maryam and her mother (no exact titles and dates were available); it’s the image on the far left in the middle installation shot. I liked the pairing of mother and daughter in the kitchen, looking away from each other, their contrasting styles and attitudes each clearly apparent via clothing and posture.