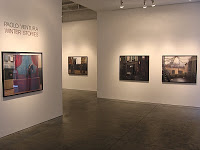 JTF (just the facts): A total of 13 color photographs, 13 drawings in watercolor/ink, and 1 glass case containing a variety of miniature props, displayed in the entry and first two gallery spaces. The photographs are digital c-prints, framed in black and not matted, and were made between 2007 and 2009. The prints come in two sizes: 30×40 in editions of 10, and 40×50 in editions of 5. The watercolor/ink drawings are framed in black and matted, and were all made in 2007. Each one is unique; they range in size from 8×8 to 16×12. While in many cases there is both a preparatory watercolor and a final photograph of a particular scene in the show, there is not a perfect 1-to-1 correlation in the pairings and some of each are shown without their match. A monograph of this body of work has recently been published by Aperture (here). (Installation shots at right.)

Comments/Context: Recently, I’ve been thinking quite a bit about the applicability of various labels for different categories of photography. Two of the terms I have been considering most carefully have been “fiction” and “non-fiction”, as they are used to characterize the printed word. Without going into the full explication of why I think these labels might be of use in understanding the broad sweep of photography (we’ll leave that for another day), let it suffice to say that Paolo Ventura’s Winter Stories images are a perfect example of the genre of photographic “fiction”, fitting neatly into the traditions of Italo Calvino and other Italian writers, painters, and filmmakers of the 20th century. 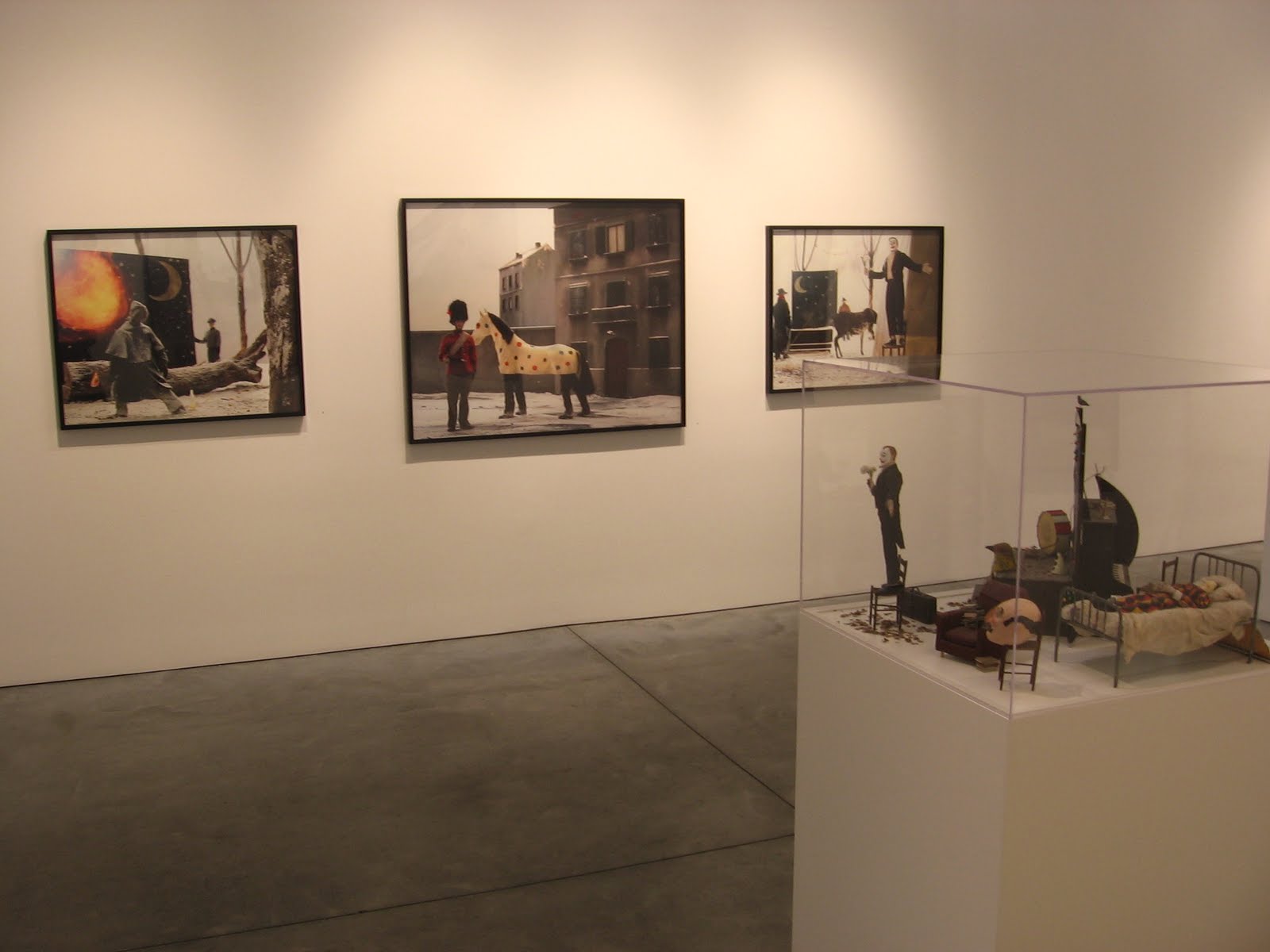 One of the basic tenets of literary fiction is the idea of using real memory as raw material that is then used to construct an original (and fictional) narrative. This conversion from memory to “reality” allows for the artist’s imagination to evolve the content in new and unexpected ways, often paring down the events to their most elemental forms and evocative emotions. We’ve talked about this idea before (most recently in the context of the photography of Amy Stein); Paolo Ventura’s work also follows an overtly painterly path, beginning with a watercolor and ink drawing, which is then transformed into a meticulous three dimensional tabletop diorama (complete with strict attention to the tiniest of details) and ultimately thoughtfully photographed to produce his large prints.
Watching the various videos linked below and hearing Ventura talk about his process, it becomes clear that photography is really the end point of his creative cycle. The watercolors are like a sketchbook of ideas that capture moods, ideas and the framework of potential vignettes and stories. After the miniature sets are painstakingly built, the “characters” experiment with different poses and compositions, as if they were actors on a tiny stage. Only after a variety of subtly different installations have been tried does a final image get taken. 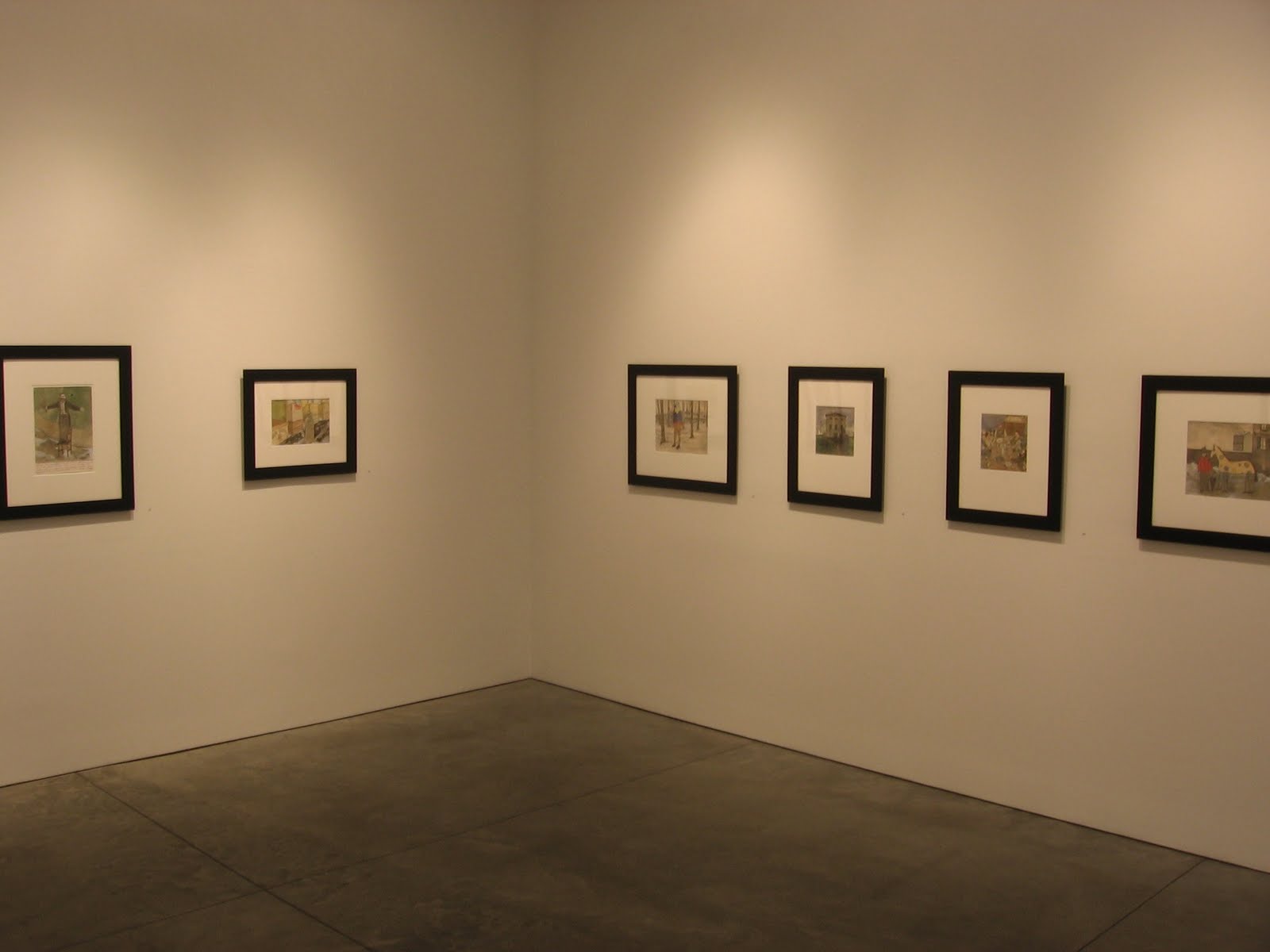 In this body of work, Ventura has recreated the magical and melancholy world of the wintertime carnivals and traveling circuses that set up on the outskirts of Italian cities and towns during his childhood. Tiger tamers, jugglers, clowns, fire eaters, and sword swallowers wearily display their skills for thin (or non-existant) crowds, standing in the cold slush under grey skies. While the images are in color, the palette has been meaningfully toned down; muted and worn colors dominate, creating a darker and earthier nostalgic feeling. And yet there are mysterious moments of magical wonder and surreal amazement taking place, or just about to: a bird man appears, a man is lifted into the air by a jumble of colorful balloons, two men in polka-dot horse costume make an entrance, as does a man with a drum on his back; what might happen next (or why) is left to our imagination.
Ventura’s images show us both the gritty, dirty “truth” of these pedestrian fairs, and also give us the sense that something special and unknowable might be going on. Together, each of the small vignettes helps to construct a well-rounded and surprisingly believable and timeless story (an entire world really), made with equal parts strange fairy tale and personal history. In the end, these are successful works of photographic fiction, with echoes of the books and paintings that transport us somewhere else in space and time and take us on a journey outside our own mundane reality.
Collector’s POV: The photographs in the exhibit are available in two sizes, and thus, two prices: the 30×40 prints are $4500 and the 40×50 prints are $7500. The watercolor/ink drawings are $5000 each. Ventura’s work has really only entered the secondary markets in the past year or two, and only a few lots have come up for sale. Prices have ranged between approximately $4500 to $16000, although with so few data points, it is hard to chart a reliable line.
While these works don’t fit into our particular collecting genres, I was impressed with both the overall craftsmanship of all the steps in Ventura’s artistic process and the ultimate ability of many of the images to suspend my disbelief and draw me into their dreamlike story.
Rating: * (one star) GOOD (rating system described here)
Transit Hub:
Paolo Ventura, Winter Stories
Through January 23rd
Hasted Hunt Kraeutler
537 West 24th Street
New York, NY 10011
Twitter| Facebook|