JTF (just the facts): A total of 8 video works, shown on black bordered display screens, and hung in the single room gallery space on the second floor. All of the works are perpetual loop videos made in 2012 or 2013. The screens are sized either 37×21 (“40 inch”) or 21×12 (“24 inch”); 6 of the works are shown on 40 inch screens, 1 work is shown on a 24 inch screen, and there is 1 diptych (a single image spread across two screens) on two 40 inch screens. The videos range in duration from 3 to 5 minutes, and are available in editions of 3+2AP. This is Kydd’s first solo show in New York. (Installation shots at right.) 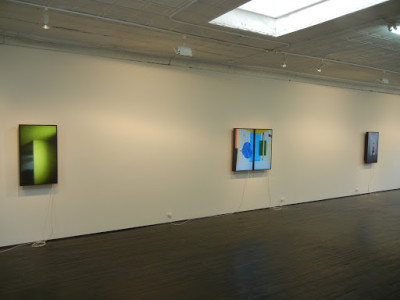 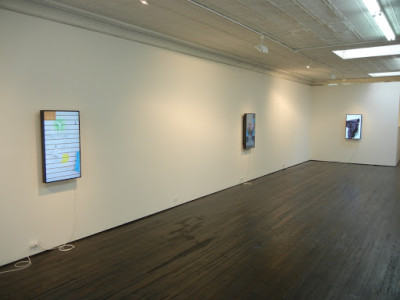 Comments/Context: The boundary lines between photography and video used to be so simple – photography was used for still images and video was used for motion and elapsed time, and the cross pollination of the two disciplines led to photographs that were “cinematic” in the way they were framed or in the way their narratives were staged. But now that every camera on the market includes the ability to easily shoot high resolution video, it isn’t surprising that many photographers are more liberally stepping into the world of video to expand their artistic options, and that a new generation of artists is growing up unconcerned with the old definitional bright lines.

Owen Kydd’s videos inhabit this semantic netherworld, falling somewhere between extended “durational” photographs and still videos. His works begin with a fixed, static camera angle, and are followed by subtle, almost imperceptible changes that come with the passing of a few minutes. A bright retail display of striped wall board and empty shelving seems perfectly frozen until the paper bell twists, the blue plastic shivers, and the tiny string wiggles in the invisible breeze. His works demand sustained, attentive observation, or the subtleties of a flicker of light across a mylar balloon or the shifting grip of woman clutching a phone will be missed entirely. The overall effect is a heightened sense of awareness of the image at hand, and an intense visual scouring of each work, in search of slow, minute changes.

While most of the videos stay fixed on one scene, one of the works cycles through a handful of separate moments, where quiet nighttime storefronts and interiors are punctuated by glances of reflected light that pass over their surfaces; the fleeting swooshes across a chartreuse green corner are like a muted ghost of a dance. The whipsaw folding and unfolding of a black trash bag is more obvious in its study of motion, with a slight echo of the plastic bag trapped in a sidewalk cyclone from American Beauty. And a planter of fake flowers points to a more complex extension of Kydd’s craft, adding a perspective altering doubled effect to his arsenal, jarring the pavement into jutting abstract layers while the leaves sway in the wind.

What I find most intriguing about these works is their investigation of how motion can be included in photography, and not just in the sense of blurs and other effects used to imply motion, but in real movement over time. Kydd’s works retain the strict conceptual formality of frozen photographic moment, but simultaneously open up doors to something more fluid. While Fiona Tan and Gillian Wearing have experimented with video portraiture that feels aware of its relationship to photography, Kydd’s images seem to emerge from a different starting point, beginning with more rigid theories of photography which are then expanded and reconsidered in the context of unlimited time and movement. For me, his works are a kind of signpost, signaling that one strand of digital age photography is rapidly evolving away from the single, canonical decisive moment we have long taken as given.

Collector’s POV: The works in this show are priced as follows. The single screen works are $8500 each and the two screen diptych is $15000. Kydd’s work has not yet reached the secondary markets, so gallery retail is likely the best/only option for those collectors interested in following up.