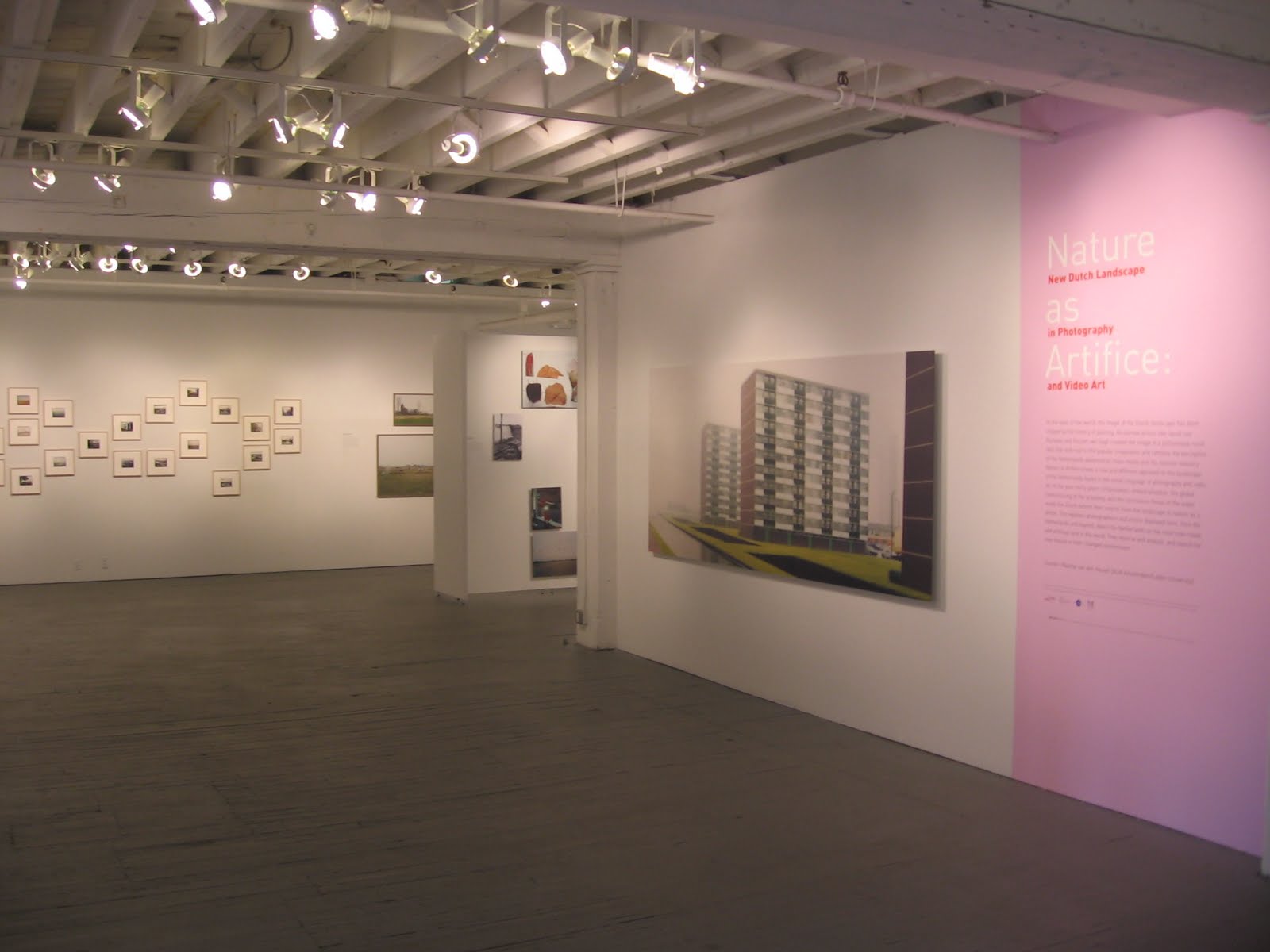 JTF (just the facts): A total of 112 black and white and color photographs and 4 video/computer installations, variously framed and matted, and hung throughout the main gallery space, which has been divided by several interior walls. (Marginal installation shots at right.) Most of the works in the exhibition are from the last decade, although a few reach back as far as the early 1980s. The following photographers and video artists have been included in the show, with the number of works on view in parentheses: Driessens & Verstappen (1 video)
Marnix Goossens (3)
Arnoud Holleman (1 website)
Gert Jan Kocken (3)
James Linders (12)
Hans van der Meer (3)
Gabor Ösz (1)
Bas Princen (2)
Xavier Ribas (1 video)
Gerco de Ruijter (4)
Frank van der Salm (2)
Hans Werlemann (1 video)
Edwin Zwakman (3)
Comments/Context: The 400 year anniversary of the arrival of Henry Hudson in New York harbor has been a non-stop festival of Dutch history and culture, with parties, receptions and exhibitions starting in the Summer and continuing on through the Fall; our Dutch friends seem to have been shuttling from one event to another for months. Our personal Dutch photography tour has had two major stops during this time: the Dutch Seen exhibit at MCNY (review here) and this contemporary landscape show at Aperture, along with several other smaller solo shows and books we visited and reviewed. Much is made in the trappings of this exhibit of the idea that the Netherlands is “the most artificial country in the world”, that the traditional Dutch farming lifestyle has been transformed by suburbanization and industrialization into something altogether different, a designed and homogenized flatland that runs to the sea. And it’s true, there are no rugged mountains or breathtaking vistas among these pictures. But what is surprising about this show is just how many photographers and artists have found less grandiose moments of beauty amidst this landscape, spare patterns and views that tell an understated story.
A big group show like this one is uneven by design, bringing together disparate and even conflicting perspectives to provide a more complex picture of the subject; as such, nearly every visitor will find some images that catch his/her eye and others that seem to miss the mark. One of the highlights of the exhibit is the big, pulsating installation of images by Theo Baart and Cary Markerink. (Installation shot at right, second from the top.) An entire long wall is filled with cars, trucks, gas stations and traffic, in a chaotic, jumbled mix of formats, processes, and sizes; the whole thing works together well as a stream of consciousness view of life on the roadways. We’ve written before about Gerco de Ruijter’s geometric aerial landscapes (here), but this was the first time we had seen them in person. (Installation shot at right, second from the bottom.) A grid of four glossy images hangs on the back wall, the cool lines and patterns coming in at different angles, highlighting the organic abstraction taking place; the larger size and shiny surface give the works an object quality that is much different than I had experienced in book form. I also enjoyed James Linders‘ black and white images of wastelands and roadside non-spaces from the late 1980s. (Installation shot at right, bottom) These images have a New Topographics feel to them, with pavement, bike racks, light poles, and curved roads coming together in careful compositions, surprisingly beautiful and subtly critical at the same time. And while video art is not really in our charter, Hans Werlemann’s view of life moving by through a car window, interspersed with still frames every few seconds was an unexpectedly thought provoking commentary on vision and everyday life; spend a few minutes letting it wash over you – it certainly got me thinking about what I am actually absorbing as I blast around on fast forward.

Overall, the show has a few high points and many others that aren’t as compelling or memorable; that said, our favorites likely won’t match yours, so swing by and make your own judgments before it closes.
Collector’s POV: While the name on the door calls this venue a gallery, it really is more like a museum; typically there are no prices posted anywhere and the works are not for sale, and this show is no different. For our specific collection with its overwhelming preponderance of black and white, the pared down images by Linders would be the best fit for the other city/industrial work already hanging on the walls.
Rating: * (one star) GOOD (rating system described here)
Transit Hub:
Nature as Artifice: New Dutch Landscape in Photography and Video Art
Through October 15th
Aperture Gallery
547 West 27th Street
New York, NY 10001
Twitter| Facebook|