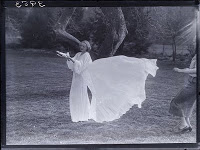 JTF (just the facts): A total of 34 black and white images, often hung as groups of related images, installed in a single room on the lower level of the museum. The exhibit also includes 4 of the negatives on a light table, 3 glass displays containing magazines, and one window case holding a large number of stacked negative boxes, complete with handwritten titles/subjects. All of the negatives are from the 1930s and 1940s; the prints are modern. (Unfortunately, there are no installation shots for this exhibit; ironically, no photography is allowed at the ICP. Only a handful of thumbnail images can be found on the ICP website below; one of the images, [Peignoir in a light breeze], 1936, is at right.)

Comments/Context: The Hungarian photographer Martin Munkacsi died in 1963, and until recently, it was thought that his negative archive was lost. In an “only on the Internet” kind of story (uncorroborated by me by the way), the entire archive of his years at Harper’s Bazaar supposedly came up for sale on eBay, and Brian Wallis, head curator at the ICP, went out to Connecticut and bought the boxes containing 4000 glass negatives in one fell swoop.
The small exhibit that has been drawn from these negatives is very process focused. It highlights how Munkacsi selected a negative and then cropped it down in multiple forms before finally arriving at the image that would run in a magazine. In contrast to Steichen’s stately controlled poses (shown in the adjacent galleries), Munkacsi often shot outdoors and emphasized movement, exemplified by a series of images of woman in a windy car, her hair blowing all over the place. His tight cropping helped make many of the images much stronger.
Overall, this exhibit is a bit thin and loose, diluting the points about Munkacsi’s contributions to fashion photography; perhaps more time is needed to dig out the gems hidden in all the boxes.
Collector’s POV: Munkasci’s work is generally available at auction, ranging anywhere from a few thousand dollars on the low end, up to nearly $50000 at the top. For our collection, we would be interested in finding a vintage Munkacsi nude (he made some terrific ones), but these works haven’t been readily available in the past few years, so we’re still out there looking.
Rating: * (one star) GOOD (rating system described here)
Munkacsi’s Lost Archive
Through May 3
International Center of Photography
1133 Avenue of the Americas
New York, NY 10036
Twitter| Facebook|