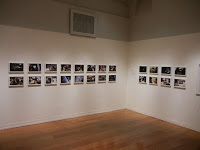 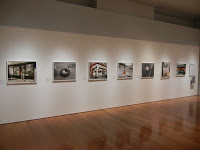 Comments/Context: On the surface, the idea of commissioning five contemporary photographers to take pictures of the sidewalk produce carts in New York city might seem like a project doomed to obscurity, mostly by its inherent narrowness – how many different ways are there, really, to make images of fruit and vegetable vendors? What is astonishing about this show is just how varied the approaches ended up being, and how compelling these stories actually are, especially when seen together as facets of the same whole.
Of the five bodies of work on view, I found Will Steacy’s photographs to be the most haunting, even though there isn’t a single produce cart in any of his images. Steacy took the unorthodox approach of making pictures of the environment in which the green carts reside, picking a single location in the Bronx, and then documenting the food options within a roughly 10 block radius of the cart. The result is a contextual map of the neighborhood, with a parade of dismal fast food, from pizza to burgers, deli sandwiches to Mexican, all cheap and easily accessible, and often discarded on the sidewalk. It’s a powerful, sometimes ugly, portrait of the problem the green carts are trying to solve. 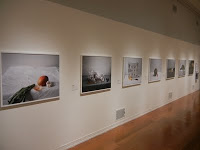 Shen Wei also came at the green cart commission from an unexpected angle. His images are elegant still lifes of the food that came from the carts, laid out in pure light on white tablecloths (almost with a nod to Laura Letinsky). The effect is simple and quiet, where watermelons and bananas become sculptural, often still adorned by stickers or packing boxes.
Gabriele Stabile and Thomas Holton looked beyond the carts to the customers and vendors themselves. Both got to know the people involved, tracking them to their homes, seeing how their lives have been impacted by the buying and selling of fresh produce. Stabile’s images are full of family meals, where shopping and cooking are preludes and processes. Holton spent his time with two Bangladeshi vendors, following their struggles both at the cart and beyond.
LaToya Ruby Frazier’s images are more like traditional street photography than the work of any of the others. They capture the juxtaposition and connection of opposites and the mixing of different kinds of people on the city’s sidewalks, catching patrons with a handful of fruit or vendors standing idly waiting for the next sale.
Taken together, these different approaches create a surprisingly robust and multi-layered picture of the impact of these carts. This exhibit is far more nuanced and engaging than you would ever expect, finding subtleties of influence that spread out from the food to a wide range of lives and communities. The photography is consistently well executed, and the overall message is effective: while the battle may be uphill and the existing environment often hostile to their arrival, these produce carts really do work, in all kinds of less than obvious ways. 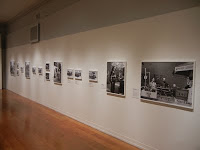 Collector’s POV: As this is a museum exhibit, there are no prices for these prints. The five main photographers in this show are represented by the following New York galleries:
In general, their work has not found its way into the secondary markets much (if at all), so gallery retail is likely the only option for interested collectors at this point.
Rating: * (one star) GOOD (rating system described here) 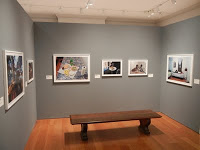