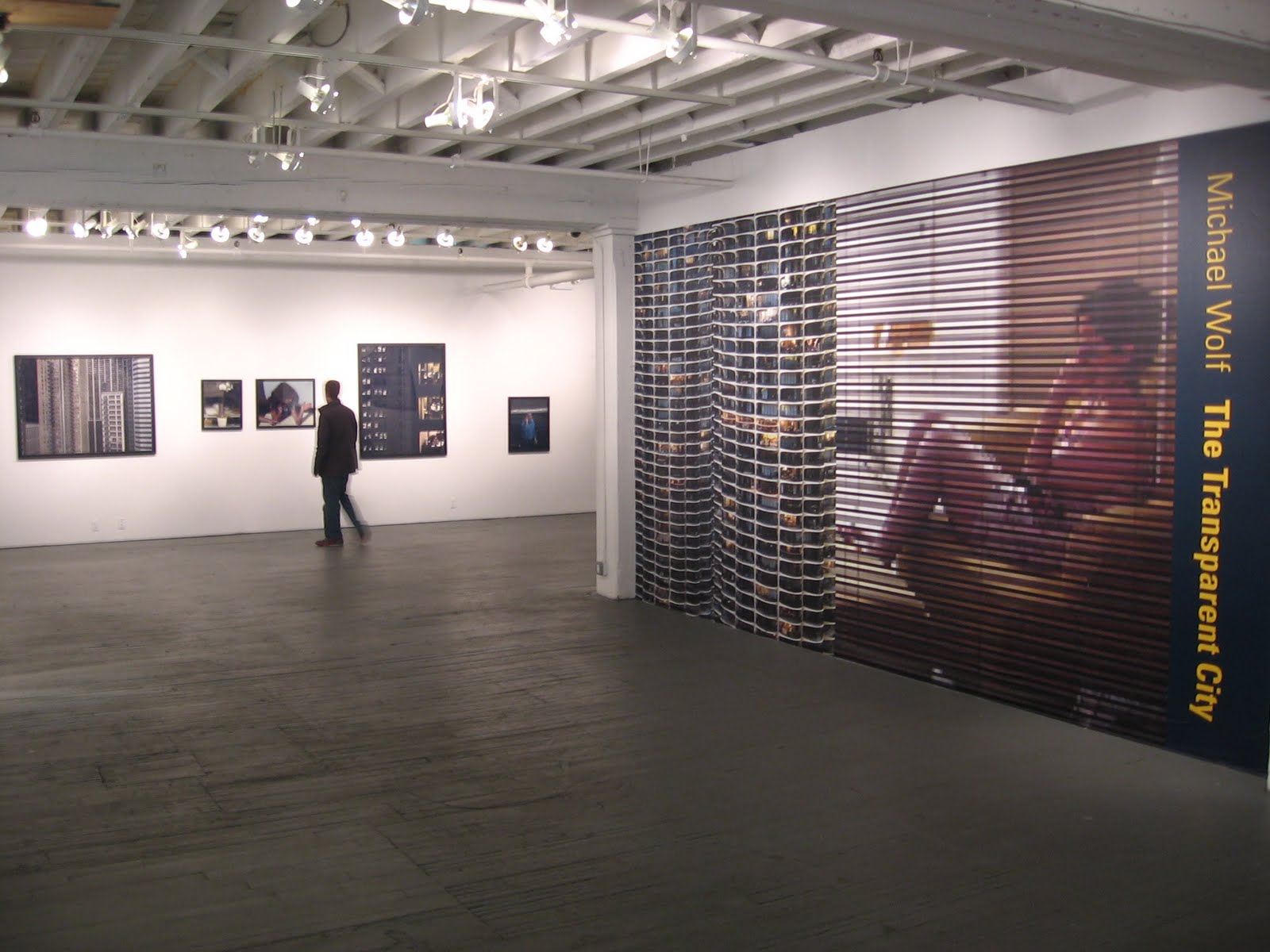 JTF (just the facts): A total of 43 color photographs, 1 video, and 1 sculpture, generally framed in black with no mat, and hung throughout the main gallery space (with two interior dividing walls), against white and dark blue walls. Since neither wall labels nor a handy exhibition checklist was readily available, the usual detailed information about sizes, dates, editions, formats, and even titles was not present; what follows are my assumptions or simply rough guesses. The chromogenic prints came in three general sizes: large (approximately 4×5 feet or reverse), medium (approximately 16×20 or reverse), and small (approximately 8×10 or reverse); the exhibit contains 13 large prints, 15 medium prints, and 13 small prints, intermixed on the walls. The first wall of the exhibit contains a prelude of sorts, two images and a wooden stool from Wolf’s previous Hong Kong project, Architecture of Density. In the middle of the gallery, a video interview runs in a loop, across from a pedestal containing a selection of Wolf’s books. A monograph of this work is available in the shop for $60. (Installation shots at right.)

Comments/Context: Michael Wolf’s new images of Chicago skyscrapers and the diversity of life that goes on inside them are fundamentally oriented around the idea of telescoping space, of seeing something from a multitude of distances, from far away to right up close, zooming in and out to to see different layers of meaning.
From ten feet away, Wolf’s large nighttime architectural studies look like any number of dense city scenes you’ve seen before; the sky is cropped out, flattening the picture plane into a gridded wallpaper of geometric lines and patterns, created by the formal repetition of the windows and vertical structure of the buildings. While the scale is larger here and the prints are in color, fundamentally, these are modernist visual ideas that go back all the way to the 1920s. The difference comes in the ability to walk right up to the frame and continue to delve into deeper layers of detail. Try that trick with a classic vintage image and you’ll get an eye full of grain and blur; in this case, individual stories resolve themselves in each pane with startling Rear Window voyeurism. Certainly new technologies play a part in enabling this kind of storytelling, and in some cases, there are echoes of the grand gestures of Andreas Gursky in these pictures. But it is this ability to go from abstraction to documentation in the same frame that is exciting. Up close, the boxes and grids become a warren of lighted offices and apartments, each inhabited by workers and everyday people.
This idea of changing and uncertain distance is amplified by the small, pixelated images of anonymous faces and bodies that are intermixed with the large architectural views. Each one was drawn from one of the big studies and blown up, the pixelation creating another layer of uncertainty; the pictures are indistinct and textured, forcing the viewer to move back and squint to resolve the details. Many of these works were made during the first weeks of the banking crisis, so there are plenty of anxious and worried looks, faces buried in hands, stressed thinking, and subtle gestures of fear. Others have a more pensive and lonely feel, as isolated apartment dwellers watch TV or putter around aimlessly. While I appreciate the impressionistic aspect of the pixels and understand their ability to leave the image more open for interpretation (rather than a strict viewing of truth), I’m not sure that most of the individual close up images can really stand that well on their own; that said, they do provide an important contrast to the larger city shots, and successfully highlight the back and forth changing of scale that is a vital part of Wolf’s artistic approach.
. In many ways, these images connect me of the earlier city scenes of Kertesz, where the small details of a cat, or a boy swinging, or a boat on a windowsill suddenly come into view when viewed up close, ultimately changing the feel of the picture. I can imagine a collector having one of these large Wolf architectural views on a big wall, and continually bringing visitors right up to the frame to show them some captivating little detail buried in an office. But while Kertesz‘ vignettes have the light touch of humor and romance, Wolf’s small stories seem more emblematic of the trials and tribulations of these depressing economic times. And so perhaps that will be the ultimate fate of these images: to rest as unexpected artistic documents of this particular point in 21st century history.
.
Collector’s POV: Since the images in this show are not for sale, no price information was offered. Michael Wolf is represented by Bruce Silverstein Gallery in New York (here) and Robert Koch Gallery in San Francisco (here). Wolf’s images have only recently begun to find their way into the secondary markets. As such, the pricing history is likely too small to be particularly representative; that said, the few works that have sold in the past few years have ranged between $20000 and $26000, all of the prints being of the largest size from Architecture of Density.
For our specific collection, one of the larger patterned architectural studies would likely be the best fit, even though we would struggle to find a place to hang it.
Rating: * (one star) GOOD (rating system described here)