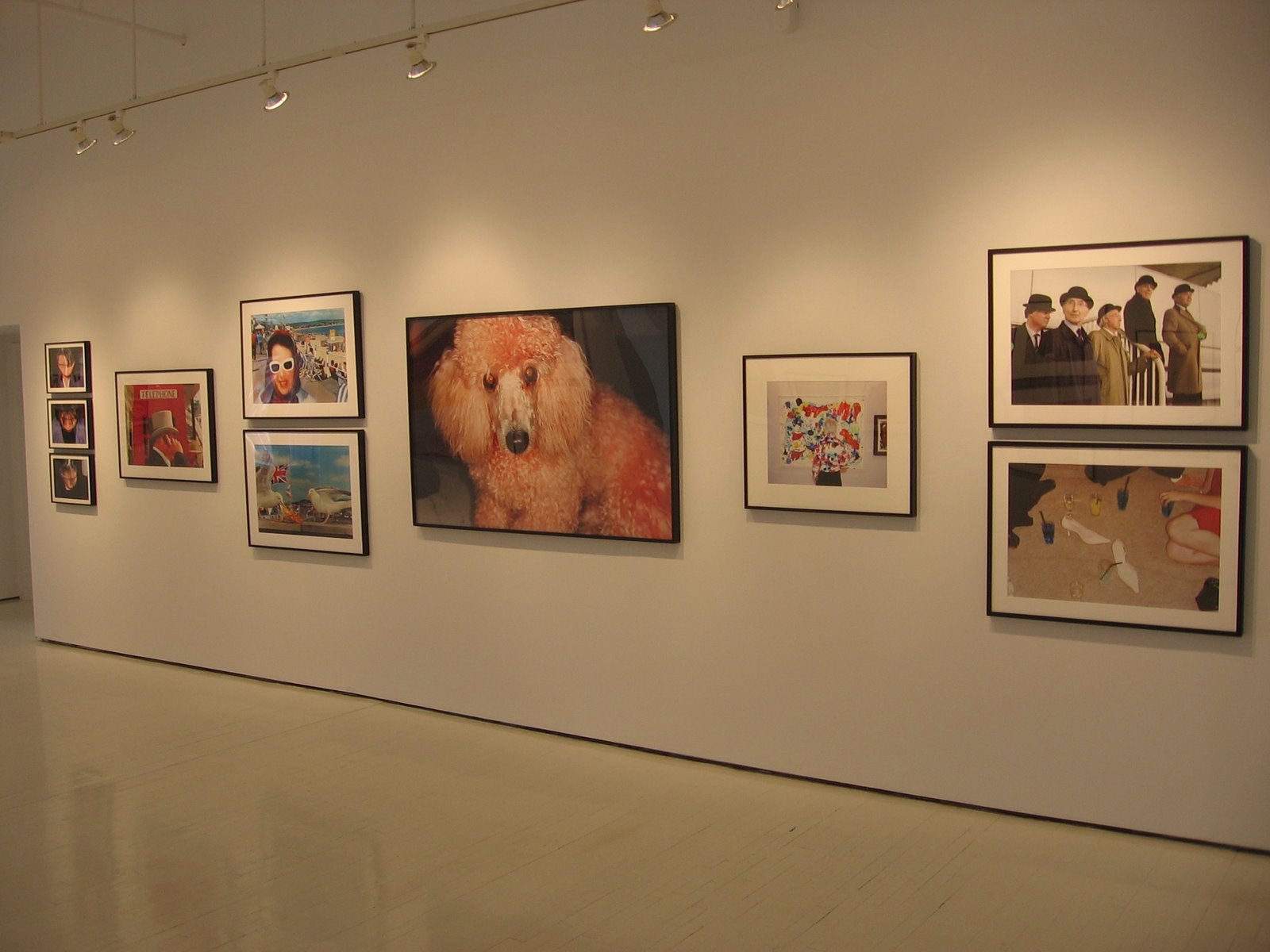 JTF (just the facts): A total of 36 images (3 black and white and 33 chromogenic color prints), in various sizes, ranging from 7×10 to 50×60. In editions of 10, 25, 33, or open, depending on the specific image. The show contains a mix of vintage and later prints, with work from the early 1970s to the present, displayed in the main gallery. (Installation shot at right.)

Comments/Context: The photographs of Martin Parr take some getting used to. Many of the images seem indistinguishable from snapshots, the colors are often blindingly vibrant and flashy, and the point of view lives somewhere between sarcasm, mockery, and wry wit. At first glance, they’re a lot to take in, but given some patience, most reveal additional layers of thought-provoking ideas about our societies and cultures, consumerism, and modern existence.
The mini retrospective on view at Janet Borden spans nearly all of Parr’s career, including at least one work from a significant number of his picture projects (Think of England, The Last Resort, Common Sense, Small World, Luxury, Bad Weather, Signs of the Times, The Cost of Living, Food, Dubai, and Japanese Commuters Asleep are all represented). Seeing all of the images together, Parr’s consistent “eye” becomes more visible: close-ups of objects not usually paid much attention to, but which become striking when enlarged, and careful juxtapositions (accomplished with vantage point and framing) that highlight the ironic and ridiculous in the everyday that surrounds us and often passes unnoticed.
Not many photographers have tackled humor with as much success as Martin Parr. For the most part, his work has accomplished the tricky task of intelligently highlighting the subtle comedy of life’s situations, without falling into the trap of the jester or the jackass. His pictures aren’t necessarily guffaw-inducing, but more the type that cause you to smile with the knowledge that he has observed something quite surprising that you likely missed.
This show isn’t exactly a “greatest hits” exhibit, although some of his best images from Think of England are indeed included. It is more of a sampler, showing off a variety of approaches, although not always with the most striking of the images from any given series. As such, it has a bit of a “hit or miss” quality to it. Overall, however, it is a strong reminder of Parr’s place as an important chronicler of our modern existence.
The artist’s personal website can be found here. His page at Magnum Photos is here.
Collector’s POV: The prints in this show range from $1500 to $15000, based both on size and popularity. Given the fairly strict boundaries of our particular collection, we will need to do some more homework exploring all of his various projects to find one image that would fit just right (perhaps one from his Flowers book).
Rating: ** (two stars) VERY GOOD (rating system described here)
Martin Parr, Parr-O-Rama
Through January 31st
Janet Borden, Inc.
560 Broadway
New York, NY 10012
Twitter| Facebook|