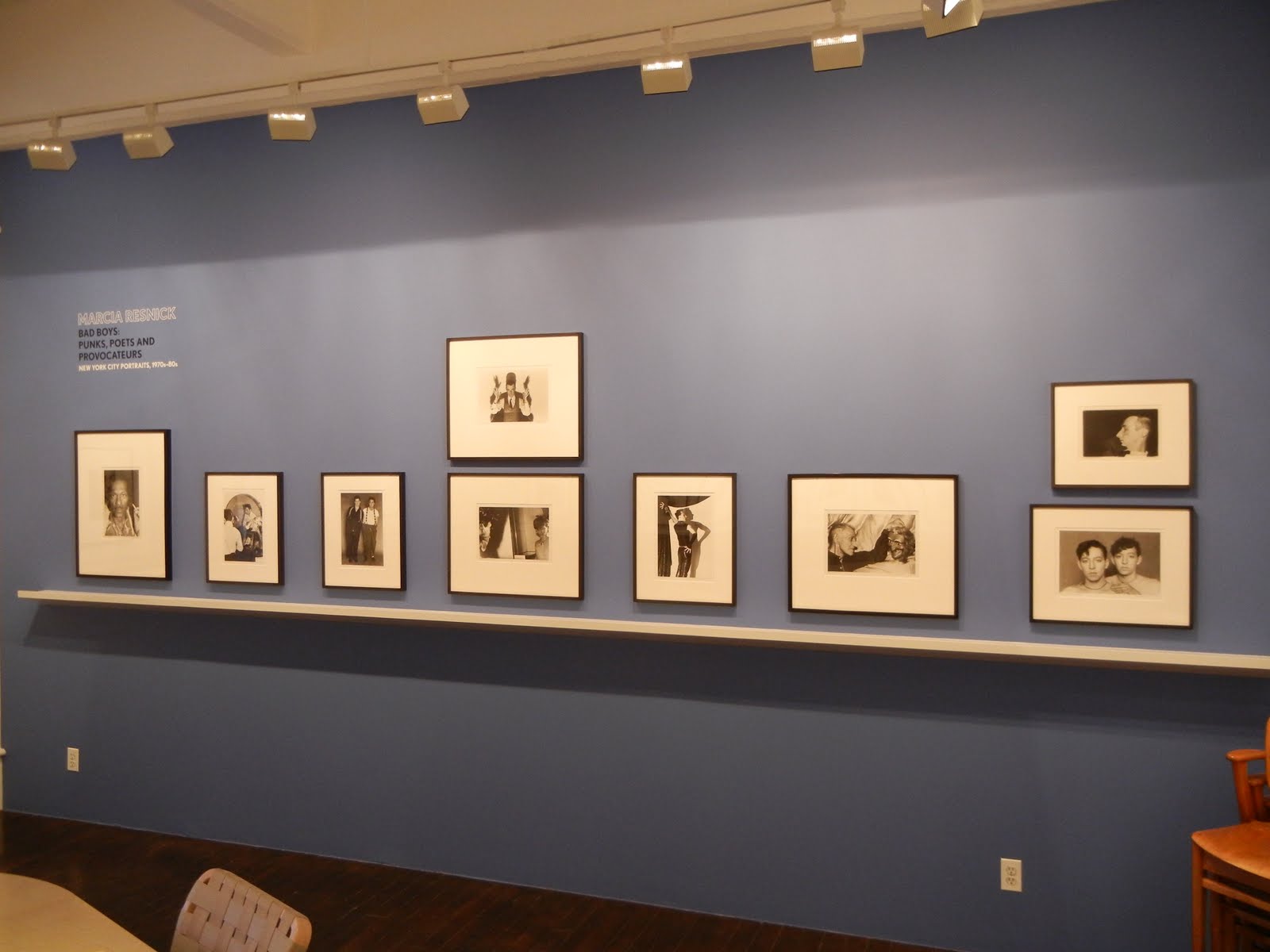 JTF (just the facts): A total of 29 black and white photographs, generally framed in black and matted, and hung against blue and white walls in the single room gallery space; one group of 6 images is unframed and pinned directly to the wall under glass. All of the works are vintage gelatin silver prints, taken between 1974 and 1982. The prints vary in size from roughly 6×10 to 16×20, with most roughly 9×13 or reverse. Individual image captions written by the artist are available in the checklist. (Installation shots at right.)
Comments/Context: Marcia Resnick’s New York portraits from the late 1970s and early 1980s are a gritty, raw time capsule, capturing the diverse personalities of famous “bad boys”, running the entire spectrum from from Iggy Pop to Divine. 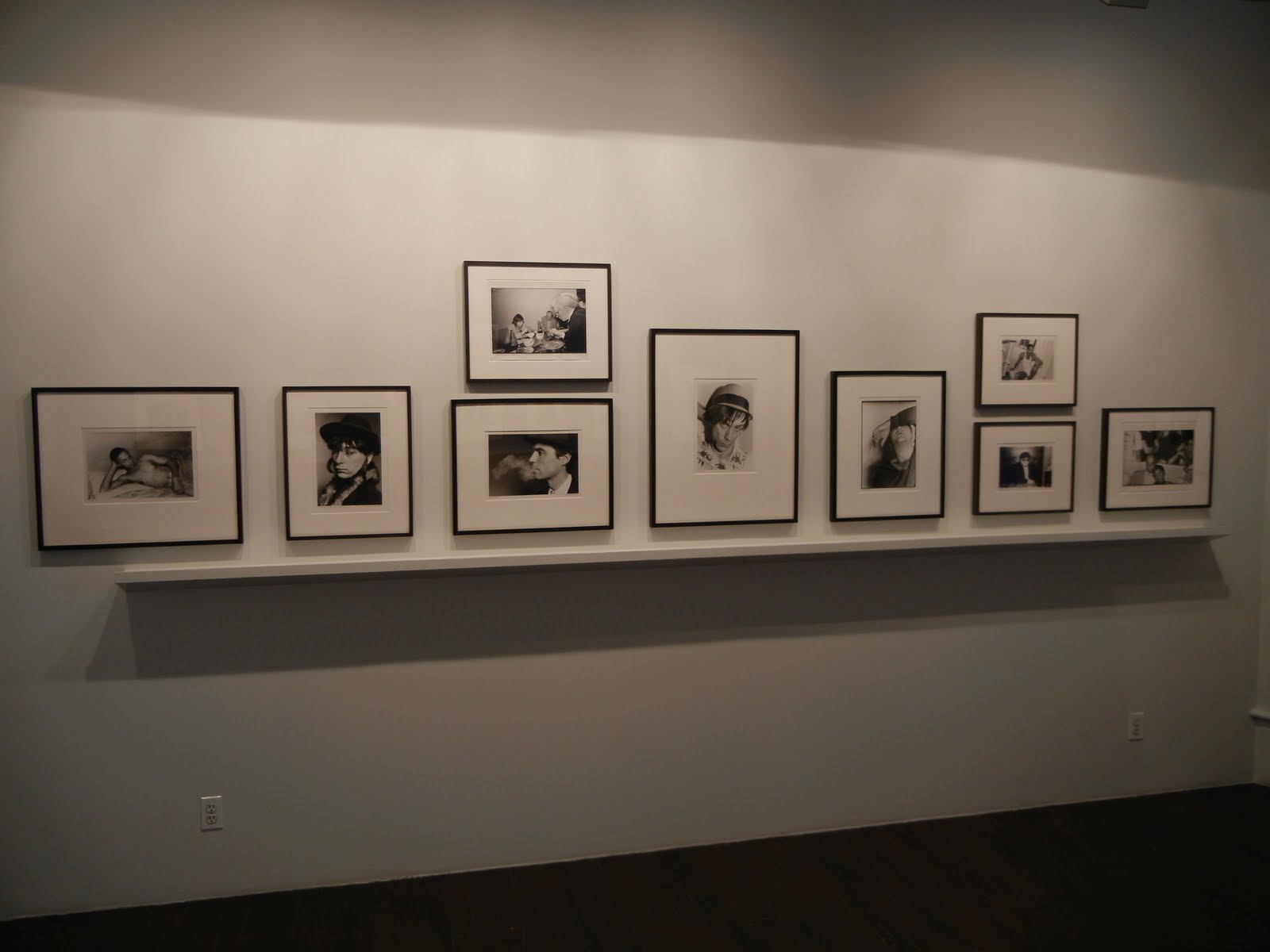 Moving between close-in faces and more theatrical stagings taken a bit further back, Resnick documented musicians, artists, authors, and actors, always with a sense of heightened drama: Johnny Thunders wearing a wide brimmed hat and elongated hair like a Hassidic Jew, John Belushi hiding behind the crook of his arm, Jean-Michel Basquiat surrounded by looming shadows, Quentin Crisp in dapper profile. The images have a down and dirty reality, mixed with the feeling that something special was going on; in one picture, Mick Jagger, Andy Warhol, and William Burroughs share a tense meal together, apparently eating in silence.
In addition to the various portraits, there is a terrific series of images of a chaotic dinner table, overstuffed with littered plates, cigarettes, crumpled napkins, half full beers, and discarded bones, photographed from slightly different vantage points and moments in time, creating a messy overlapping testament to excess. It’s grungy, disorderly, confrontational, and full of kinetic energy, just like the many larger-than-life characters peering down from the walls nearby. 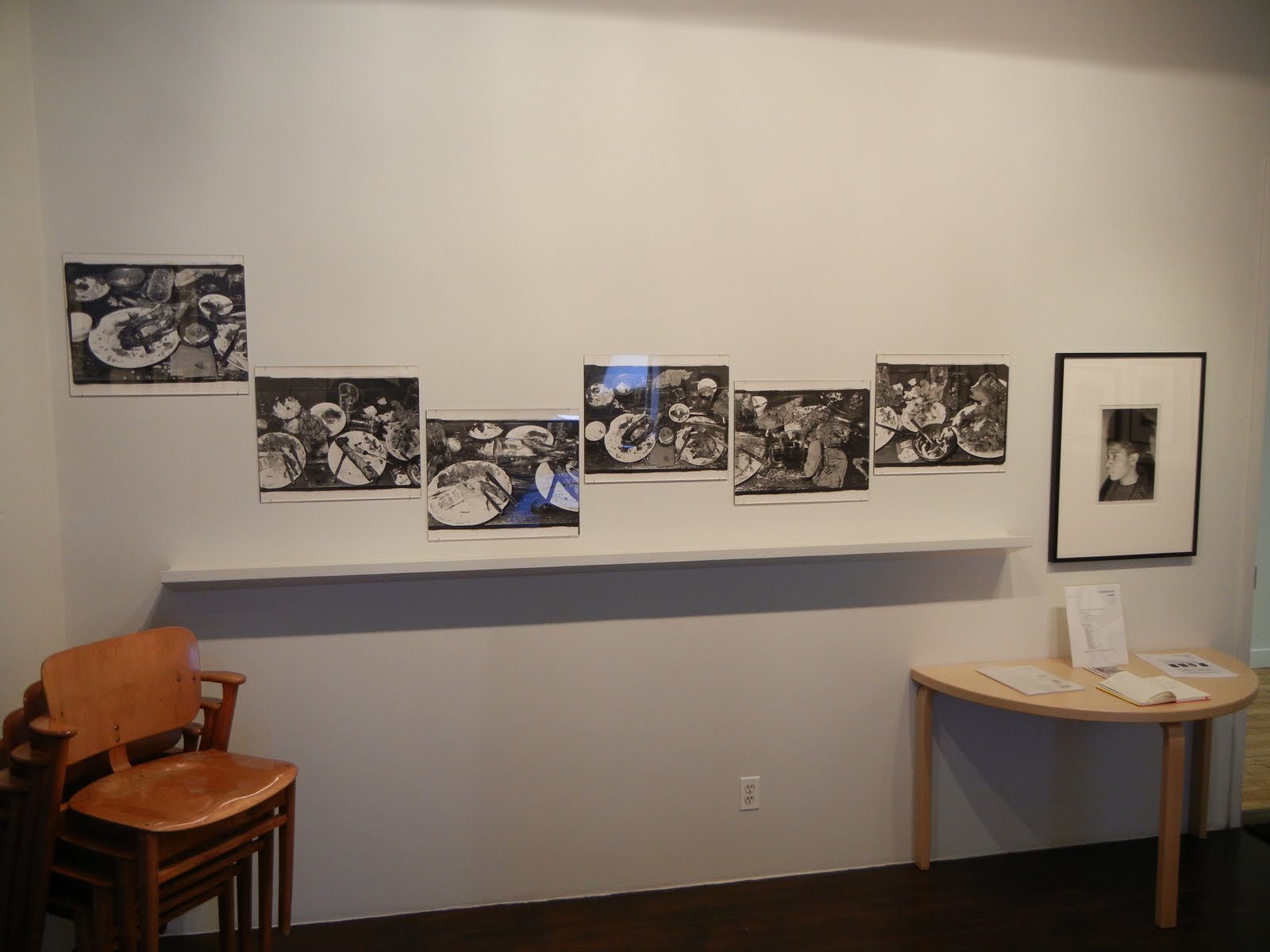 Collector’s POV: The prints in this show are priced between $2000 and $4500. Resnick’s prints are not regularly available in the secondary markets, so gallery retail is likely the only option for interested collectors at this point.
My favorite image in the show was Charles Ludlum, NYC, 1979; it’s actually hanging in one of the small side alcoves and isn’t pictured in the installation shots above. The up-close portrait is slightly off center, and the formal qualities of the various textures (shirt, tie, jacket, whiskers, fingers, and folds of skin) make for an intricately layered composition.
Rating: * (one star) GOOD (rating system described here)
Transit Hub:
Marcia Resnick, Bad Boys: Punks, Poets, and Provocateurs
Through February 26th
Deborah Bell Photographs
511 West 25th Street
New York, NY 10001
Twitter| Facebook|