I have a handful of shows in the backlog from the summer that I think merit a discussion, even though they are now closed. I’ll be working my way through these before I dig into the new Fall offerings.
. 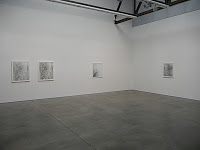 JTF (just the facts): A total of 13 Laserchrome prints, framed in white with no matting, and hung in the entry, main gallery, and one back room. The images range in size from 29×24 to 43×35 and are available in editions of 5. All of the negatives are from 2007. (Installation shots at right.)

Comments/Context: With a cursory glance at Luisa Lambri’s new photographs, it might be tempting to slap a label on them and think we can characterize what they’re all about. Calling them Minimalism or lumping them in with other architectural photographs from across time would be the two easiest paths forward, since her works are, in fact, elemental geometric images taken through the skylights of famous Modernist buildings. But I think those conclusions would be evidence of laziness on the part of the viewer; I think there’s quite a bit more to be discovered here beyond figuring out which bucket or category they might belong in.
.
Most of the images in this show have the exact same framing: an upward view out a glass skylight at the Sheats-Goldstein House, where a leafy canopy of trees hangs overhead. Two parallel edges of the window running vertically through the frame act almost like a prism, subtly fracturing the natural scene. Changes in the light conditions generate images that range from hazy white Southern California brightness to dense dark green with moody shadows. Aside from a few fallen leaves trapped on the outside of the glass, the only variable is the light; everything else in the frame stays constant. While this kind of rigorous set up may sound like the recipe for an academic exercise in photographic tonality, I think Lambri’s approach is less about rigid rules and tedious variations and more about a personal response to a specific space across time. The images are full of soft contemplation and quiet meditation, an experience of nature via the context of the building and through the eyes of the architect who placed that skylight just so. They are gradual and intimate, where fleeting shadows dance rhythmically across the glass surface or an ephemeral beam of faint sunlight pokes through the leaves. There is the strong feeling of seeing the “outside” from the “inside” and of becoming intricately involved in the architecture, rather than just recognizing its surface features.

I think this is a case where simplicity is deceiving; these pictures have much more personality than a Minimalist nametag might imply. Instead of showing us obvious views of soaring rooflines or elegant siting, Lambri has brought us down to the experience of the individual, showing us both the wonder and the nearly infinite variation that can come from such a controlled setting. Collector’s POV:The images in the show are priced at either $10500 or $12000 based on size. Lambri’s work has very little secondary market history, so gallery retail is likely the only option for interested collectors at this point 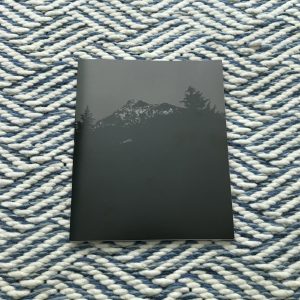