JTF (just the facts): A total of 25 color photographs, framed in silver and matted, and hung against white walls in the single room gallery space. All of the works are either vintage c-prints or vintage cibachrome prints, taken between 1971 and 1977. Physical dimensions range from roughly 4×6 to 18×12 (or reverse); no edition information was available. MACK Books published a second edition of Ghirri’s 1978 monograph Kodachrome in 2012 (here). The show is sequenced to match the order in the book. (Installation shots at right.)

Comments/Context: In the years that have followed the recent rediscovery of the work of Luigi Ghirri, there has been a strong tendency to try to understand him in the context of Eggleston, Sternfeld, and Shore and 1970s American color. His work was made in color (check), his work was made in the 1970s (check), at first glance, his work has the appearance of a snapshot aesthetic (check), therefore, he’s the “Italian Eggleston”. But having spent time with this exhibit and the associated reissued monograph, I’ve come to the conclusion that such a categorization is both overly easy and ultimately misguided. As we see and digest more of his work, his vision seems increasingly innovative and original, with more logical ties to European Surrealism than to anything happening in American photography.

The works in this exhibit come from Ghirri’s first self published book, and the photographs are full of visual dislocation and wry disorientation. Compositions are often interrupted, with a vertical board bisecting a beach view, a cross shaped window pane quartering the gardens at Versailles, and a dark shadow falling directly across a framed picture. Other works play with subtle optical illusions and the flattening of perspective, almost with conceptual glee: a perfectly straight contrail in the sky connecting the two sides of a mountain valley, the curve of a man’s face echoed by the arc of a souvenir Eiffel Tower, and two men sitting on the corner of a gravel roof, its dark edges receding with mirrored precision. Many images have a constructed, collage-like aesthetic, combining painted murals and found cut outs with tourists walking by and bored couples, creating juxtapositions that are unexpected and often absurd or mysterious. While a few images are inherently about photographic color (the blown pink beach umbrella, the glow of foggy red traffic lights, the wall painted half yellow half blue), most of Ghirri’s pictures seem less about color itself and more about a specific way of seeing. Time and again, he confounds your expectations (using his own understated brand of Dada), making photographs of the frames not the paintings, or the postcards not the sunset itself.

I thoroughly enjoyed Ghirri’s sense of visual wit, his images carefully composed to make everyday Italian reality seem altogether more surreal and odd. He never crosses the line into heavy handed trickery, staying instead within the confines of the quietly poetic and the unassumingly puzzling. In the end, his pictures are consistently smart, comforting us with their familiar subject matter and then upending our sense of balance with their deft surprises.

Collector’s POV: The works in this show are priced between $12000 and $20000, based on size. Ghirri’s prints have only been sporadically available in the secondary markets in recent years, with prices ranging from roughly $1000 to $34000. 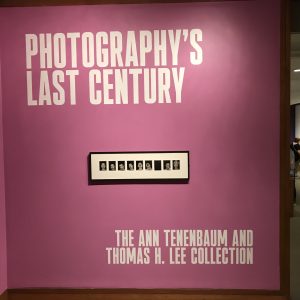 JTF (just the facts): A group show consisting of 77 photographic works (some made from multiple prints) and photobooks, made between 1916 and 2018. (Installation shots below.) The works are ... Read on.