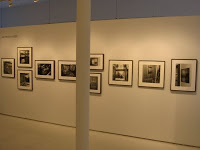 JTF (just the facts): A total of 47 black and white images, framed in dark grey and matted, and hung in the main gallery space. All of the prints are gelatin silver prints, either 11×14 or 16×20 (or reverse); there are 5 in the smaller size and 42 in the larger size on display. All of the works were taken between 1998 and 2009, most in the past few years, and the prints were generally made in the same year as the negative was taken; Friedlander does not edition his prints, so there are no edition sizes/numbers for these works. For the most part, the images were taken in New York and California, with a variety of other locations in and around the United States represented as well. (Installation shots at right.)

Comments/Context: I visited this exhibit of Lee Friedlander’s new work last week, and since then, I’ve been thinking hard about how to talk about the images without covering ground that has already been ably traversed by countless other reviewers, scholars and critics over the years. The truth is, it isn’t easy, given the avalanche of words that have already been written, but what I can say is that this small show helped me to crystallize my own understanding of Friedlander, even after seeing the gargantuan traveling retrospective a few years ago and having a shelf full of his well-crafted books in our library. So let’s start with a not-so-simple question to ponder: why is it that regardless of whether Friedlander has pointed his camera at a riot of chain link fence, a dense thicket of desert underbrush, an overtly hairy nude, an urban architectural scene or shop window, a jumble of flower stems in a vase, or a random vista taken through a rental car window that all of these images have the unmistakable hallmark of his artistic vision? How is it that his visual vocabulary is so original and different, so much so that his work (regardless of subject matter) is immediately recognizable? Pair with these another set of questions: why, well in to his 70s, is Friedlander still shooting so prolifically? Why doesn’t he just rest on his laurels and coast into the sunset, picking up a few more lifetime achievement awards for his mantel?
Having never met Friedlander, it is certainly presumptuous of me to try and answer these questions. But my guess is that it all comes back to a restless and relentless approach to looking, one that has been refined over the decades into a dizzying array of internal complexities and heuristics that manifest themselves as a simple flow of seeing, Friedlander-style. This is not to imply that the pictures take themselves; I’m sure that’s far from the reality. But I’d like to imagine that his congested compositions coalesce in his mind’s eye as a natural part of his itinerant wanderings, invisible to the rest of us who might be standing right nearby. Friedlander’s new works cover territory he has visited before, but the new pictures seem amplified somehow, as if the simple layers and overlaps of his 1960s and 1970s street scenes have been super-charged. Many of the current images are of shop windows, with an odd assortment of female mannequins and cardboard beer girls as the primary subject, many wearing various forms of swimsuits, negligees and fetish garb. Layered on top are powerful reflections of geometric buildings and street life captured in the panes of glass, creating two dimensional overlaps of transparency and shadow, pattern and interconnection. A few of the images add yet another layer of wildness via steel security grills that interrupt the view. At first glance, the clutter is a little confusing and overwhelming, but after a few moments, the kaleidoscope effect quiets down and the congestion seems more controlled. Each one becomes a swirling visual puzzle to unpack.
Other images in the exhibit show a mastery of spatial compression, of flattening the objects in the picture plane into abstract compositions of line and form rather than a representation of something in particular. One of my favorite images in the show depicts a gathering of gutter trash, frozen into a dancing mix of forms bound up in a sheet of ice. Boring shots of framed pictures hanging on the wall are suddenly made altogether more puzzling by an open door jutting boldly into the middle of the view. Everyday booth tables at diners and coffee shops are transformed by odd angles and weird shadows. The ultimate New York City cliche, the graffiti covered truck, is flattened out into a chaotic expanse of pattern, intermixed with the lines of ladders and hand carts. And it wouldn’t be a Friedlander show without a crazy self-portrait or two; one here captures the artist in a staged window scene with a fur throw, his likeness reflected via a mirror in the display.
My takeaway from this excellent show is that Friedlander remains at the top of his game, continuing to push the limits of his artistic vision and finding new rules to disregard; the visual chaos here is confidently consistent, the seeming disorder only a thin mask for his mature control of the medium. Wandering around among these images was like being the guy in the chair in front of the huge speaker in that old Maxell cassette tape ad – my hair was literally being blown back by the tremendous force of the output on the walls.

Collector’s POV: The prints in this show are priced at $5200 or $7400 based on size. Gallery pricing for Friedlander’s new work continues to creep upward, slowly rising over the past several years. A wide variety of his images are routinely available in the secondary markets, ranging from approximately $2000 to as much as $80000 in recent years; at the low end of the price range, one can find later prints, broken up portfolios and lesser known images, and at the high end, vintage prints of his most recognizable images from the 1960s and early 1970s.

We actually already own three Friedlander images (here, two from Sticks and Stones and one from Stems), and we continue to consider adding others, both old and new, to our collection.
Rating: *** (three stars) EXCELLENT (rating system described here)
A few comments about this particular rating: conspiracy theorists out there will likely notice that this review coincides with a banner sponsorship by Janet Borden on the sidebar, and may therefore assume that there is some kind of sinister bias at work in this review. This is not the case. Our reputation for impartiality is worth far more to us than any banner ad, so I can assure you that this show has been rigorously reviewed on its merits alone, without any other external influences, and been found to wholeheartedly deserve three stars.
Transit Hub:
Lee Friedlander: Still Life
Through December 30th
Janet Borden, Inc.
560 Broadway
New York, NY 10012
Twitter| Facebook|