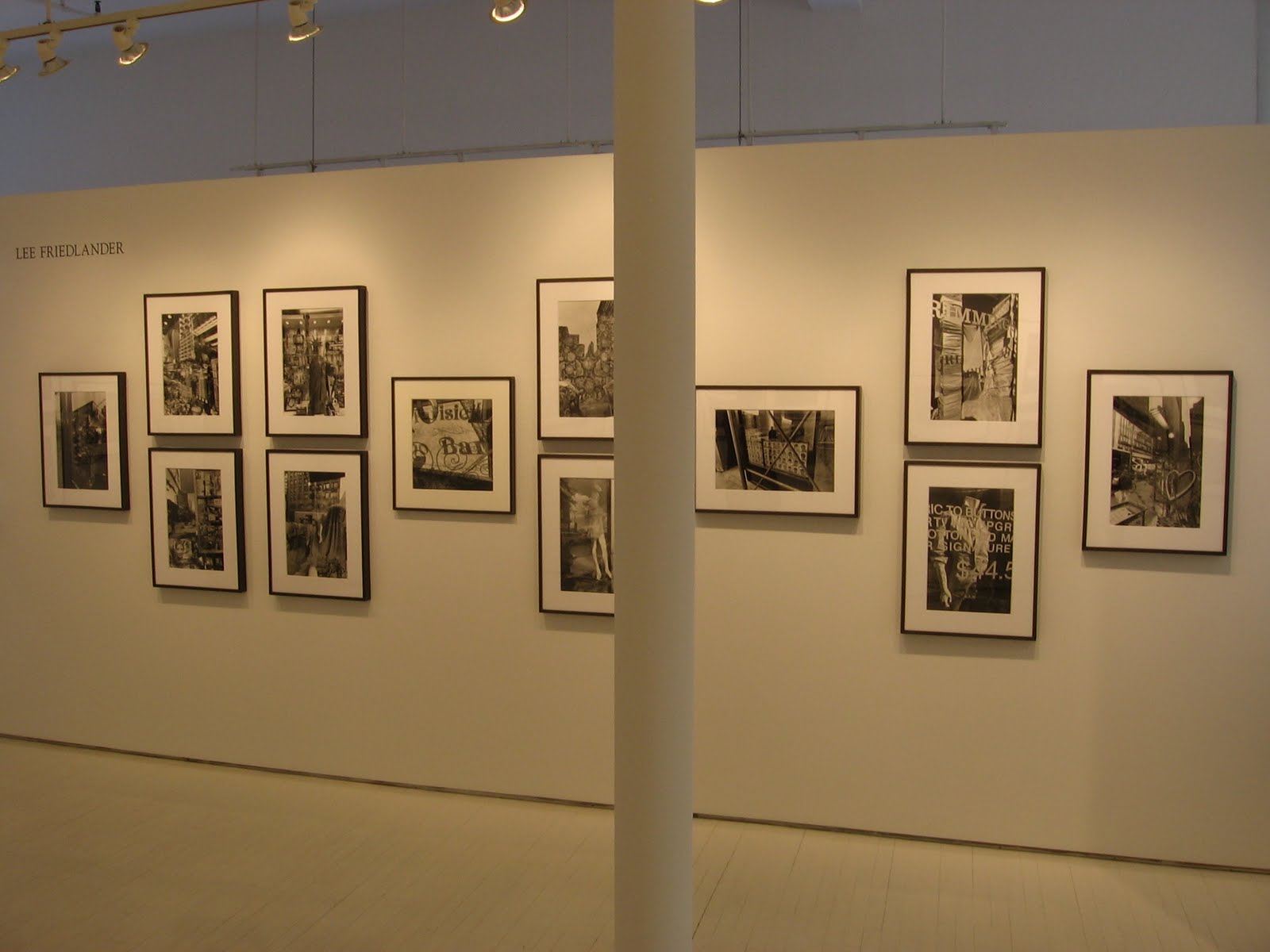 JTF (just the facts): A total of 44 black and white images, framed in black/dark grey and matted, and hung in the main gallery space. For the most part, the specs on the prints are exactly the same as the previous show, but we have repeated the details here for the sake of completeness. All of the prints are gelatin silver prints, either 11×14 or 16×20 (or reverse); there are 4 in the smaller size and 40 in the larger size on display. All of the works were taken between 1999 and 2009, most in the past few years, and the prints were generally made in the same year as the negative was taken; Friedlander does not edition his prints, so there are no edition sizes/numbers for these works. For the most part, the images were taken either in New City or in New York city, with a variety of other locations in and around the United States represented as well. (Installation shots at right.)

Comments/Context: It is my guess that there are very few (if any) artists in recent years who have created so much new work that they have merited taking back to back exhibition slots at a prominent New York gallery, but the prolific Lee Friedlander has done it with this unusual double play. The first part of this show last December was one of our top photography shows of 2009 (here), so I have been avidly looking forward to seeing part two to see what other tricks Friedlander has up his sleeve. In contrast to the amplified effects of the previous show, this exhibit has a much more subdued and subtle feeling. While there is another selection of shop window reflections on display, these works are less slashingly chaotic and confrontational; for the most part, the scantily clad mannequins have been exchanged for oriental carpets, spools of thread and fabric bolts, New York city tourist trinkets, and elaborate cakes. The signature flattened picture plane and overlapping reflections are ever present, but the overall effect is somehow less jarring. Perhaps there is a little Friedlander fatigue going on; if these same images had been shown six months from now, perhaps I would have seen them with fresher eyes.
A second set of works center on Friedlander’s own bookshelves and the tabletop displays of family photographs and personal memorabilia in his home. Elementary school pictures of children and grandchildren are clustered amidst the books, overlapping and mixed together with a Polaroid of Friedlander with Bill Clinton, a post card of Tina Turner, a sheet of postage stamps of Ella Fitzgerald, and the words “best grandpa”. There is also a layer of intellectual voyeurism here, achieved by considering which great novels have been selected and saved by the photographer over the years. This is a much quieter and more personal view of the artist than we have seen before, and one that is clearly steeped in the passing of time. But these images are less recognizable as signature Friedlander, as the jolting compression and abstraction of the picture plane is meaningfully less pronounced. A third group of pictures uses flowers and plants as its main subject matter. Several of these works take a straight top down view of the flowers in vases, using the shadows of the window frames and nearby Adirondack chairs to create additional patterns and intersecting lines. While the rest of the vegetation images are a jumble of intertwined plant types, these unexpected bird’s eye floral views are something we haven’t seen before; they’re an unusual motif we’d like to see Friedlander explore more deeply and exaggerate even further.
My favorite picture in this show doesn’t fit into any of these neat groups. It mixes fishing tackle (lures, weights, and gloves thrown onto a piece of plywood) with a shadow self-portrait. The plywood table bisects the picture plane, creating two layers of different depth; it’s a classic Friedlander visual puzzle to be carefully unpacked.
Overall, while there are a handful of excellent pictures in this second collection, this work is less consistent than the images in the previous show. Perhaps it merely comes back to a question of editing; even when you are as talented and prolific as Friedlander is, maybe there just aren’t enough astounding new pictures to fill two big gallery shows.
Collector’s POV: Once again, the prints in this show are priced at $5200 or $7400 based on size. The market for Friedlander’s work has not changed in the past month, so see our previous post for details about secondary market pricing and recent auction history.
Rating: * (one star) GOOD (rating system described here)
Transit Hub:
Lee Friedlander: Still Life 2
Through February 27th
Janet Borden, Inc.
560 Broadway
New York, NY 10012
Twitter| Facebook|