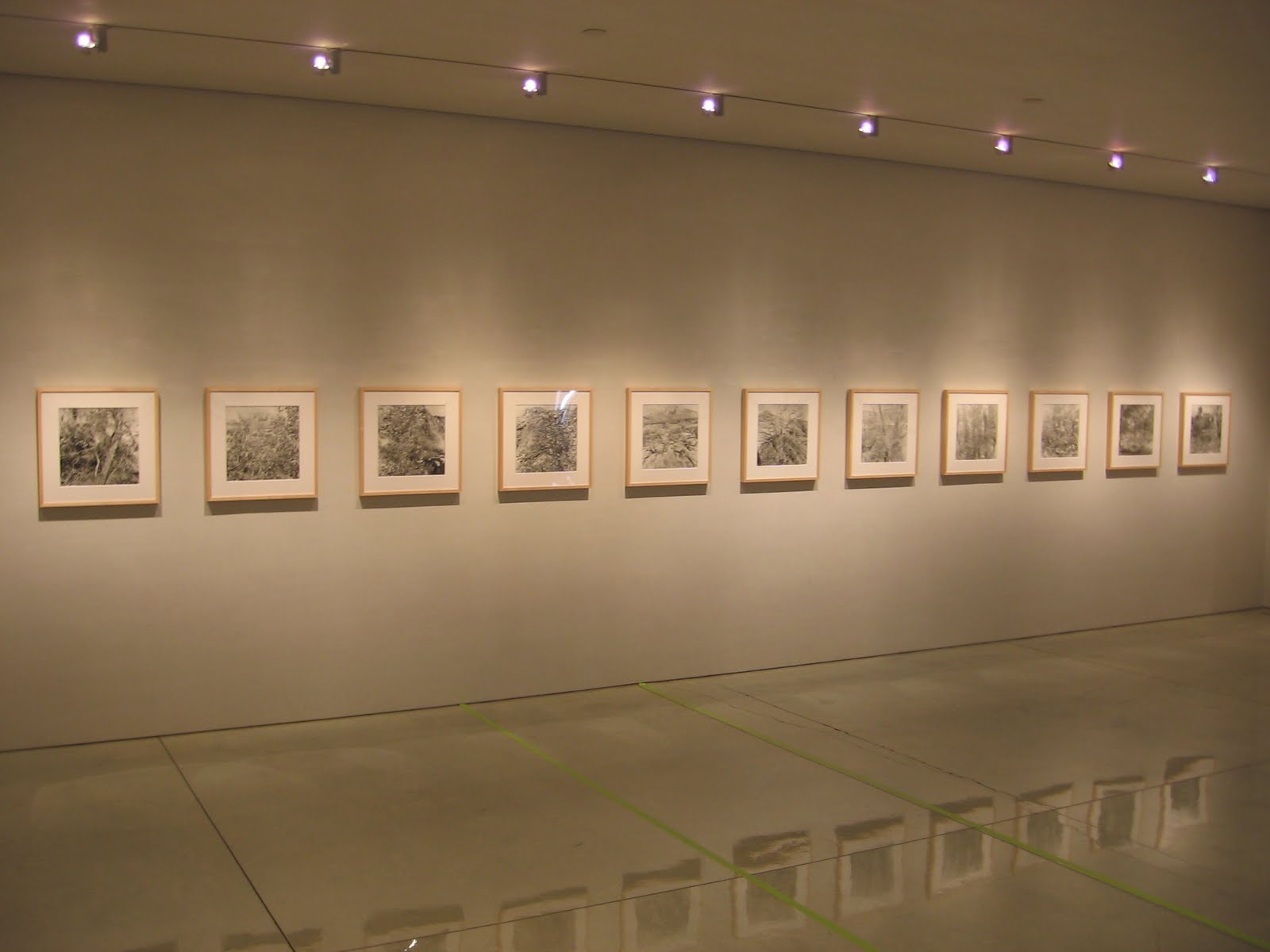 JTF (just the facts): A total of 65 black and white photographs, framed in blond wood and matted, and hung against mottled grey walls in the main gallery space and a smaller side gallery (44 prints in the main room and 21 in the side room). All of the works are recent gelatin silver prints on 20×16 paper, framed square. The images were taken between 2008 and 2009 in California, New Mexico, Wyoming and other Western locations and are uneditioned. An exhibition catalog is available from the gallery. The show was curated by Klaus Kertess. (Installation shots at right.)

Comments/Context: If you were to take a representative sample of traditional landscape photography greatness and compare these chestnuts with Lee Friedlander’s recent landscapes, I think the most reasonable conclusion would be that Friedlander, even at his advanced age, is a bomb-throwing, rule-breaking subversive. His pictures disregard nearly every landscape convention and cliche on the books, throwing away the heroic long view, trading it for claustrophobic immersion in the roughness of the land. 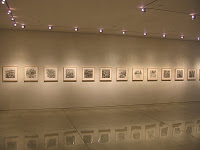 While Friedlander’s landscapes might be thought of as the anti-Ansel Adams (a thorough rejection of prettied-up grandeur), they remain rooted in a deep sense of American love of nature. His images have the immediacy of walking on foot, of bushwhacking through endless thickets and catching a glimpse of something glorious in the distance. They are human scaled, independent, self-sufficient, reminiscent of what you might have really encountered on a day hike with Muir, or Thoreau, or Whitman.

In general, this body of work seems like a logical extension from The Desert Seen and Apples and Olives; there is a similar aesthetic on display, just applied to different subject matter on the ground. Nearly every image is some kind of blocked view, often with some specimen shrub right in front, poking its twiggy fingers right in your eye. The view is constantly frustrated, obstructed, obfuscated, to the point that we feel hemmed in, trapped by the forest, attacked at every angle by layers of trees and underbrush; perhaps we have forgotten how to feel comfortable in these natural surroundings. And yet there is a graceful elegance to these all-over compositions, the feeling of really being there and letting go a bit, becoming involved rather than watching safely from afar, seeing the beauty of the overlooked details – the tree bark, the leaves, the delicate snow cover.
. 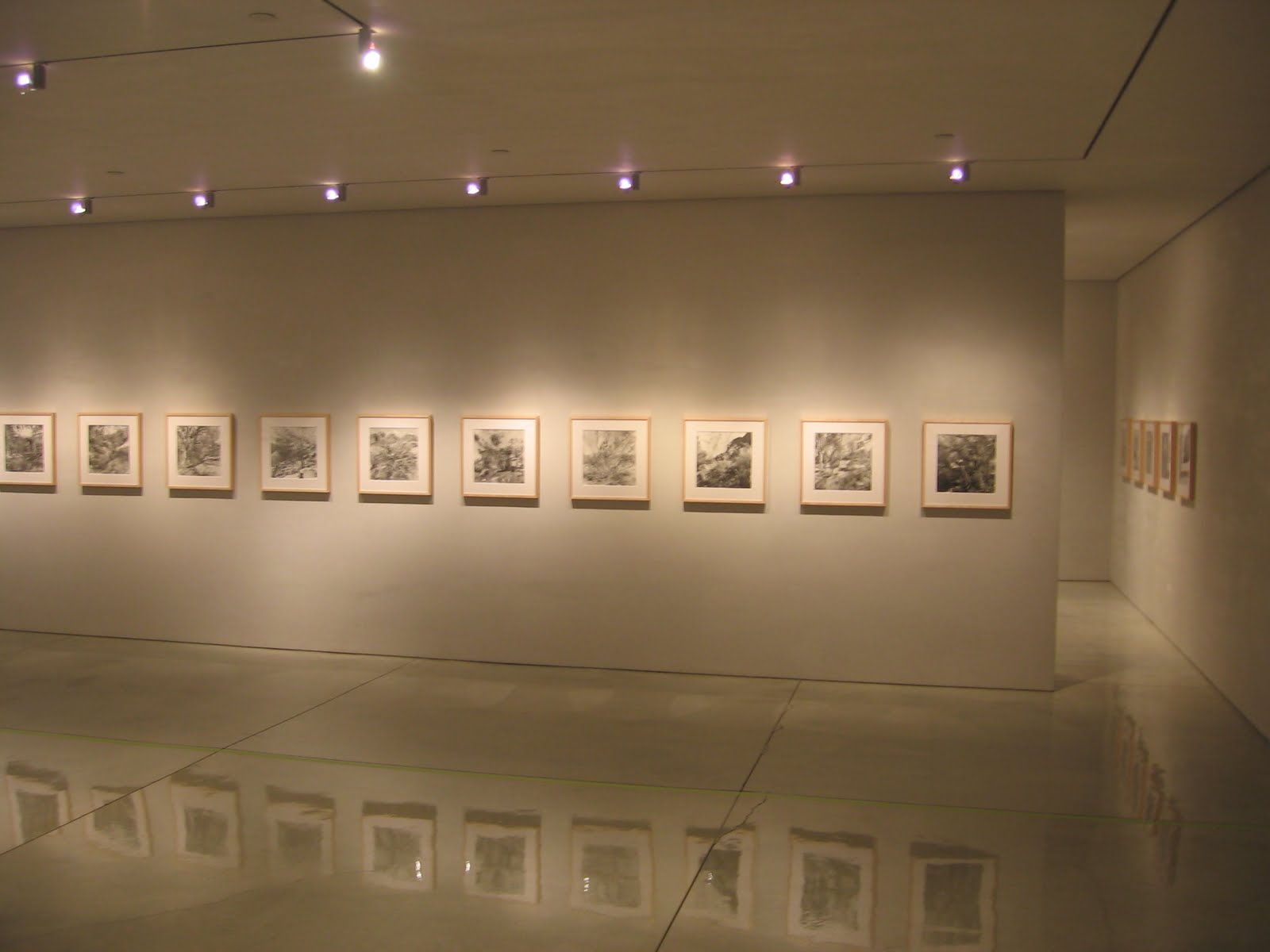 And then for just a fraction of a second, a glimpse of mountains appears in the distance, screened off by the branches. It’s a double-edged moment: maybe it reminds us that all the effort of scrabbling through the inhospitable bush was worthwhile, that the land is indeed amazing, or maybe those mountains are just Friedlander’s irreverent joke, a reminder that his pictures are anything but traditionally grand. I think the pictures can be read both ways: both intensely, dirt in your shoes human, and entirely ironic.
A few quick thoughts on the show details. In many ways, the polished floor, dimmed lighting, hushed tone venue of Mary Boone seems like a mismatch for these pictures; the photographs are brash, full of life and in your face; they’d do just as well against a rough brick wall or plywood paneling, with a raucous, energetic, expressive conversation going on in the background. As always with the prolific Friedlander, there are a few too many images on view (the side room doesn’t add much to what is already on display in the main gallery), and some tighter editing might have made the effect a bit stronger; the straight-line hanging encourages the pictures to blend together a bit too much. And finally, I think some of these works would be truly mind-blowing if they were enlarged to massive scale (say 40×40).
All in, Friedlander has once again demonstrated that he has an immense reserve of originality, and can find an innovative point of view for nearly every photographic genre. In these works, he has expertly deconstructed the landscape, reconnected to the perspective from the ground, and found satisfaction in the first-hand experience of being altogether insignificant.
Collector’s POV: The prints in this show are priced at $8500 each, which represents another step up in gallery pricing for Freidlander’s newest work. Friedlander is represented by Janet Borden in New York (here) and Fraenkel Gallery in San Francisco (here).
.
A wide variety of his images are routinely available in the secondary markets, ranging in recent years from as little as $2000 to as much as $80000; at the low end of the price range, one can find later prints, broken up portfolios and lesser known images, and at the high end, vintage prints of his most recognizable images from the 1960s and early 1970s.
Rating: ** (two stars) VERY GOOD (rating system described here)
Transit Hub:
Lee Friedlander: Recent Western Landscape
Through October 23rd
Mary Boone Gallery
745 Fifth Avenue
New York, NY 10151
Twitter| Facebook|