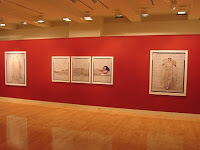 JTF (just the facts): A total of 14 large scale color photographs, each mounted but unframed, and hung against alternately red and cream colored walls in the main and side galleries. There are 12 single images and 2 triptychs on view. Neither process information nor physical dimensions were given on the gallery checklist. The works were made between 2008 and 2010 and are available in editions of either 10 or 15. (Installation shots at right.)
.

Comments/Context: I’m guessing that most contemporary photography collectors can easily identify the work of Lalla Essaydi: large scale color images of young Arab women, draped in gauzy white clothing and covered head to toe with Islamic calligraphy, with the patterns of writing echoed on the walls and furnishings around the subjects, creating an enveloping environment of patterned henna lines. Her works explore and reimagine Western stereotypes of the Arab world, from exoticism to 19th century Orientalism (think Delacroix), adding a uniquely modern, feminist point of view. This show reprises some familiar images from her Les Femmes du Maroc series and mixes them with new work from her Harem series. It isn’t surprising to find that at some point the “all-over calligraphy” artistic motif would eventually run its course, and Essaydi has now moved on to exploring the adjacent territory of the colorful decorative patterns found in the tiled areas of Moroccan palaces, particularly the hidden rooms reserved for members of the harem. Her models pose in sitting nooks, doorways, on floors and near archways, surrounded by elaborate wood carvings and staggering patterned tilework. Once again, she uses the camouflage technique of matching her models’ robes to the surrounding environment, this time covering the loose drapery with endless blue and white abstract geometries. Her young women are trapped in these spaces, lost in the endless and elaborate ornamentation, dissolving into intricate designs.
These new works once again consider many of the same themes from her earlier work: the role of women in the modern Arab world, the constraints of tradition, and the Islamic cliches, conventions and misunderstandings of the West. Her pictures continue to be pleasingly decorative, while at the same time quietly undermining the scenes they portray. All in, in this new series, Essaydi hasn’t radically modified the artistic formula that has worked for her in the past; instead, she has made a smaller step to a related set of subject matter that can be easily placed into her existing (and already successful) visual framework.