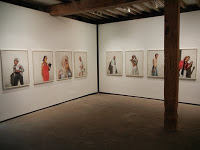 JTF (just the facts): A two-part show, split between the gallery spaces at 243 Bowery and 1 Freemans Alley. The Freemans show consists of 28 large scale color photographs, framed in white and unmatted, and hung nearly edge to edge in the single room space. The Bowery show consists of 6 photographs upstairs (framed similarly) and 1 three-channel video (9 minutes long) shown in the main downstairs space. All of the photographs are archival pigment prints on cotton rag paper mounted to Plexiglas, made between 2008 and 2010. The photographs are generally sized 39×29 (in editions of 3), except for one image in the Bowery show which is 26×20 (also in editions of 3). The video was made in 2010, in an edition of 5. A monograph of this body of work is available from the gallery for $45. (Installation shots at right.)
. 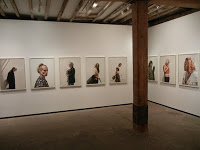 Comments/Context: It’s a pretty tough challenge for a young photographer to wedge herself into the already crowded field of contemporary street portraiture and then durably and defensibly develop an original point of view. In fact, this genre is so strewn with entirely forgettable, derivative photographers that it most resembles a medieval battlefield after a particularly bloody exchange; hardly anyone actually emerges intact with a brand new formula. Katy Grannan’s images of the invisible and marginal inhabitants of the sun blasted streets of San Francisco and Los Angeles aren’t pictures that deviate widely from those of a handful of recognized masters, and yet, she seems to have found a way to tweak the proportions of the visual ingredients just enough to generate an unusual recipe. A touch less intimate and empathetic than Arbus, a pinch more offhand and less formal than Avedon’s In the American West, and quite a bit more theatrical and performative than most street photography or Sander clones, Grannan’s photographs capture a melting pot of quirks and eccentricities with a surprising level of cool distance and mystery. 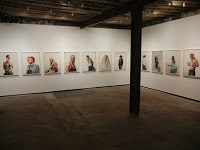 All of Grannan’s images have a roughly similar composition: 3/4 pose with an indirect glance, against a whitewashed backdrop in pure sunlight. From there, the details of personalities expand in an infinite number of directions. A man in a silky green and blue shirt shimmies against a wall, while another with a top knot and heavy makeup frowns into the distance. Bushy beards, long wavy hair, black eyes, elaborate tattoos, breathing tubes and wigs tell part of the story, while simple poses and gestures become almost dance-like against the uniform flatness. While these pictures have the trappings of picked from the sidewalk documents, there is something altogether collaborative and choreographed about the final results; there are multiple layers of subtle performance going on, with the subjects creating personalities both for themselves for and the passing camera.

While not every one of these portraits is completely compelling and memorable, I found the overall effect of the many photographs seen together to be evidence of something new. Grannan seems to have synthesized the lessons of her many predecessors and successfully incorporated a more conceptual mindset, generating an approach that is at once personal and removed. It’s a tricky line to walk, and several of the images fall a little flat. But when she gets the emotional temperature just right, the photographs have that timeless sizzle that makes me think we will be seeing pictures from this series again and again in the years to come. 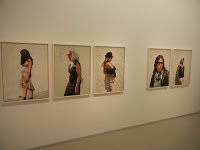 Collector’s POV: The photographs in this show are available in two sizes: the 39×29 images are $11000 each, and the 26×20 images are $9500 each. Grannan’s work is just beginning to become available in the secondary markets; recent prices have ranged between $3000 and $10000. Given the small amount of her work available at auction, gallery retail is still the best option for interested collectors at this point. This project was also recently shown at Fraenkel Gallery in San Francisco (here).

.
My favorite image in the show was Anonymous, San Francisco, 2010; it’s fourth from the left in the top installation shot. I liked the faded, aspirational glamour of the older woman’s swirl of windblown hair, combined with her giraffe print shirt and beaded swan handbag; it’s roughly harsh and touching at the same time. I also particularly liked the soft, ironic undertone of Anonymous, Los Angeles, 2009; it’s the last image on the right in the third installation shot. In it, a long haired man with a FUCK LAPD tattoo across his chest stands gently holding two small bunnies.
.

Katy Grannan: The Happy Ever After: The Believers and Boulevard Series
Through April 30th