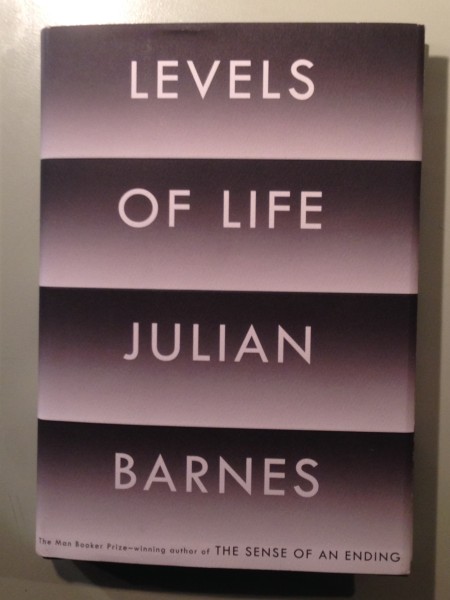 Comments/Context: One of the levels of Levels of Life—the slender memoir by Julian Barnes about the struggle to regain his emotional balance after the death of his wife—concerns the early history of photography. In trying to see his way forward, he has found it helpful to step back into the first half of the 19th century. Various modern forms of technology introduced in those decades offered us, he believes, startling new perspectives on our lives.

“Photography, like jazz, was a sudden, contemporary art that achieved technical excellence very quickly,” he writes early in the book. “And once it became able to leave the studio, it tended to spread horizontally, out and across. In 1851 the French government set up the Heliographic Mission, which dispatched five photographers across the land to record the buildings (and ruins) that made up the national patrimony. Two years earlier, it had been a Frenchman who first photographed the Sphinx and the Pyramids.”

As in his novels Flaubert’s Parrot and History of the World in 10 ½ Chapters, he stocks his first-person narrative with real-world figures and extracts from their lives quotations, stories, or facts that help him to frame questions that have arisen from his own history.

One of the personages called up for symbolic duty is Gaspard-Félix Tournachon a.k.a. Nadar. As the first photographer to take a camera up in a balloon and into the Paris sewers, he combines inviting metaphors for Barnes as he surveys his happy 30-year marriage to his wife, Pat Kavanagh, and the bottomless despair he is experiencing now.

Nadar saw photography as one of the “three supreme emblems of modernity” (the others being electricity and aeronautics.) With his bright red hair and beard, and a portrait studio interior decorated in the same color—the exhibition site in 1874 for a group of painters soon to become known as the Impressionists—he was a flamboyant showman. According to Barnes’s schematics, Nadar was also “less interested in the horizontal than the vertical. His portraits surpass those of his contemporaries because they go deeper. He said that the theory of photography could be learnt in an hour, its techniques taught in a day; but what couldn’t be taught was a sense of light, a grasp of the moral intelligence of the sitter, and ‘the psychological side of photography—the word doesn’t seem too ambitious for me.’”

The French actress Sarah Bernhardt also makes a cameo in Levels of Life, both as a portrait subject of Nadar and as a love interest of the British adventurer Frederick Burnaby, who died in 1885 fighting for the British Empire. All three are linked in the mind of Barnes for having shared the romantic experience of seeing the earth from hot air balloons.

From his wide reading in French literature, Barnes dashes his narrative with anecdotes from the lives of other real-world characters. “Balzac had a theory of the self that believed Daguerre’s invention stripped the sitter of a layer of his soul, a view shared by Gérard de Nerval and Théophile Gautier.” The novelist Théodore de Banville visited Nadar’s studio and observed that the “vainest sitters were actors, closely followed by soldiers,” although the photographer himself was surprised to discover that everyone, however famous or beautiful, was inevitably disappointed by his or her portrait.

The last third of this book, entitled The Loss of Depth, is the nakedly confessional. “Every love story is a potential grief story,” Barnes writes of his marriage. “We were together for thirty years. I was thirty-two when we met, sixty-two when she died. The heart of my life; the life of my heart.”

Unable to distract himself with either meaningless sports on TV or opera recordings, he find that everything he reads—a 1938 Italian novel about a doting husband who speaks to a photograph of his dead wife—contains secret messages about his misery. He can sound at times as if he were suffering from a literary disease, not a real one. Had he not trapped himself in his own conceits or been so eager to find lessons in the history of sight and aviation, he might feel better. “When Blériot makes his flight across the Channel, Nadar’s wife is buried: high and low,” he remarks too neatly.

But figuring out where to stand when examining one’s life or the lives of others after tragedy is perennially vexing. Take too long a view of human events and the day-to-day battles of people dissolve into historical abstractions, such as the Industrial Revolution or Modernism. Personal turmoil may be even more difficult to keep in focus or perspective.

In his 2008 meditation on death Nothing to Be Frightened Of, published the year of Kavanagh’s death, Barnes was blithe as a confirmed atheist handicapping the dim chances of a hereafter for himself. Five years later, his tone is noticeably bleaker. The memory of his wife’s absence is still sharp; and the pain that was supposed to have gone away hasn’t.

He finds that the usual consolations of photography have let him down. The eternal present of a snapshot from the past has been replaced by a post-modern world of untrustworthy reproductions: “Binocular memory has become monocular. There is no longer the possibility of assembling from two uncertain memories of an event, a surer, single one, from triangulation, by aerial surveying. And so that memory, now in the first person singular, changes. Less the memory of an event than the memory of a photograph of that event. And nowadays—having lost height, precision, focus—we are no longer sure we trust photography as we once did. Those old familiar snaps of happier times have come to seem less primal, less like photographs of life itself, more like photographs of photographs.”

As before, religious faith provides no answers. The God’s eye view of human affairs, wherein everything that happens on the ground is part of a celestial plan, remains unworkable for him. “We have lost God’s height, and gained Nadar’s; but we have also lost depth,” Barnes concludes. It’s an open question in this book whether he will ever find a steady level again.