Another closed show from earlier in the summer.
. 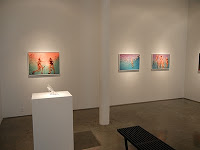 JTF (just the facts): A total of 12 color photographs, framed in white with no mats, and hung in single room gallery space. The archival pigment prints come in three sizes: 14×19 (editions of 10), 25×33 (editions of 7), and 41×56 (editions of 3); there is 1 image in the small size, 10 in the medium size, and 1 in the large size on display in the exhibit. The works were made between 2008 and 2011. There is also a single sculpture on a white pedestal (a glass slipper), sized roughly 9x8x4, from 2011. (Installation shots at right.).
Comments/Context: Jill Greenberg’s recent underwater photographs are a meaningful departure from her signature stylized portraits of crying children, bears, and celebrities. Starting with ideas drawn from a commercial assignment (capturing the US synchronized swimming team), the project evolved over time into an overtly feminist statement, connecting to work from earlier in her artistic career. 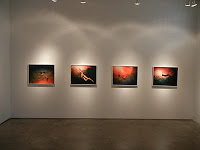 Greenberg’s setup leads to a fairly literal visual embodiment of the concept of the “glass ceiling”. Women in color coordinated bathing suits hang suspended in pastel colored swimming pools; lit from above and shot from below, the bodies (either as clusters of women or solitary figures) drift headless, as their tops poke through the surface of the water. The strikingly preposterous detail to be found in these images is that all the women are wearing high heeled shoes, which weigh them down like anchors, dragging them into objectified doll-like poses or making them bob up and down in the water like buoys or corpses. Immersed in playful combinations of cotton candy pink, aquamarine blue, and faded peach refractions, the bodies seem oddly passive; unable to swim, the only option is to struggle to the top and gasp for breath. The prettiness of the pictures makes the situation all the more awkward and ridiculous.

While the feminist irony of the construct is obvious in a heavy handed way, I found the images to be quietly matter of fact and surprisingly distant. Sure, we can make some easy joke about being “dragged down by style” or the like, but there was less thrashing, fighting, and tension against that invisible barrier than I might have expected. The figures seem to float powerlessly, drained of their energy and empty of purpose, simply making the best of the puzzling reality of being stuck swimming in fancy shoes. 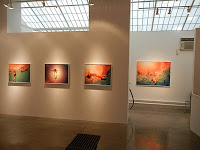 Collector’s POV: The works in this show are priced by size: “small” at $3500, “medium” at $5500, and “large” at $8000. Only a couple of Greenberg’s prints have reached the secondary markets, so it’s hard to chart much of a price pattern from so few lots; as such, gallery retail is likely the only option for interested collectors at this point.

Two random asides. First, these images reminded me of a terrific poem by the British poet Stevie Smith called Not Waving But Drowning (here). Second, I have racked my brain for durably memorable underwater photographs and I have come up empty. In fact, the only ones that I could remember at all were Brett Weston’s underwater nudes, which I have never cared for even remotely. What have I forgotten?