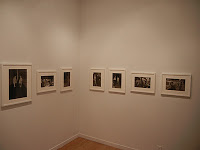 JTF (just the facts): A total of 27 black and white photographs, framed in white and matted, and hung in the small single room gallery space and the adjacent viewing alcove. All of the works are vintage gelatin silver prints, taken between 1978 and 1981. The images have been printed in one of two sizes: 11×14 (or reverse) or 20×24 (or reverse); there are 3 of the large size and 24 of the small size in the show. A monograph of this body of work, entitled Street Cops, was published by Harper & Row in 1981. (Installation shots at right.)

Comments/Context: Every collector takes his or her own often serendipitous path in learning about the history of photography, and depending on which books we read, which galleries we frequent, and who we talk to, we piece together an understanding of which photographers were important or influential and how it all fits together, framed by our own personal likes and dislikes. With each passing year, we refine this understanding by seeing new works, reevaluating ones we already know, and filling in gaps in our knowledge. While there may be a somewhat standard path for this learning, chance certainly plays some role in this ongoing educational process.
So while some of you will likely already be completely familiar with the work of Jill Freedman, until this show, I really wasn’t; perhaps I had run across a print or two here and there, but I hadn’t developed any real opinion on her photography. As a result, my reaction to this excellent show was all the more profound: where had Jill Freedman been hiding all these years, and why wasn’t she more well known? This exhibit of her Street Cops work is the first solo show of the work in New York since it was made more than 30 years ago, and when you see the quality and consistency of these prints, this fact will seem all the more remarkable and downright puzzling.
. 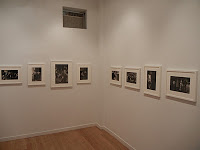 In this project, Freedman followed the men and women in blue of the Ninth Precinct on their daily rounds, walking their beats and riding in their cars. The streets of late 1970s New York were a gritty place, with a never ending stream of hookers and hustlers, thieves and addicts, crazies and runaways to deal with, and her pictures are an intimate catalogue of crime scenes, accidents, and arrests. While she doesn’t flinch from showing us the realism of blood and guts, her pictures avoid some of the harshness and voyeurism of Weegee, focusing instead on the warmth of a gesture or the humor of an interaction. As such, they have more in common with the works of Levitt or Kertesz, where the turn of a head or the framing of a picture can create a feeling of sympathy or outright comedy. At a time when the reputation of the police force wasn’t particularly positive, Freedman found the human side to their work, the subtle kindness and compassion buried beneath bushy moustaches and long sideburns.

Almost all of her pictures turn on the play of a facial expression or the visual cleverness of the framing. Laughter, disbelief, skepticism, and concern, accompanied by the matching body language, give us the narrative moods and help to tell the stories of different kinds of confrontations. Paired cops slide down a cramped hallway and vault over a cinder block wall in perfect synchronization, while injured brothers hold each other shirtless like a pieta on a dingy sidewalk. This kind of photographic craftsmanship is on display again and again around the walls of this show; it’s not a parade of lucky shots, but instead a controlled example of a consistent vision and disciplined execution.

I came away from this exhibit thinking that this body of work could happily share a wall the best of 1970s street photography, especially in the context of what makes New York a unique place. As such, it certainly belongs in the collections of our local museums, both for its “snapshot of a time gone by” documentary power and for its relevance to the evolution of the artistic genre. This is one of the best shows of vintage work I have seen all year, so don’t wait another 30 years to rediscover this lesser known gem. 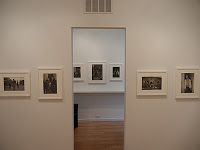 Collector’s POV: The prints in this show are priced as follows: the 11×14 prints are $6500 each, and the 20×24 prints are $13000 each. Freedman’s work is not widely available in the secondary markets, so gallery retail is likely the best option for interested collectors at this point.