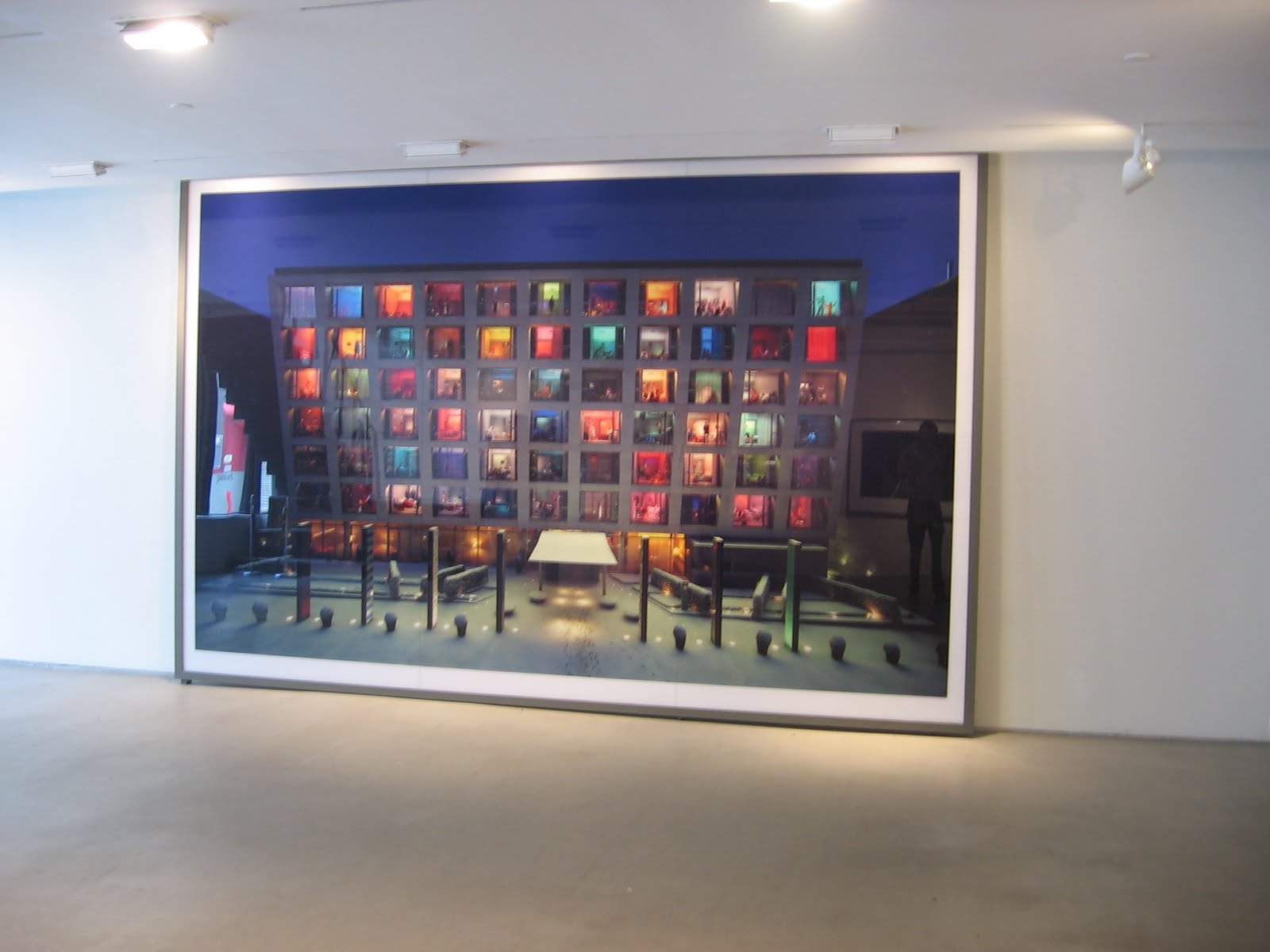 JTF (just the facts): A total of 14 large scale color photographs, framed in grey metal and not matted, and hung in the main gallery space on the ground floor, and in the smaller gallery upstairs. All of the works are c-prints on Diasec, made between 2004 and 2010. The works range in size from 43×63 to a whopping 181×118, and are variously available in editions of 5 or 10. A monograph on the work Saturday Night was published by Hatje Cantz in 2009 (here); it is available from the gallery for $50. There is also a thin exhibition catalog (Inside Out) that is for sale for $20. (Installation shots at right.)

Comments/Context: Korean photographer In Sook Kim’s first solo show in New York is a polished and sophisticated combination of meticulous architectural documentation, thoughtful staging and manipulation, and layers of rich conceptual ideas, all delivered in large scale, object quality works. It is the kind of photography that will easily cross over into the world of contemporary art, and will likely generate some buzz along the way. 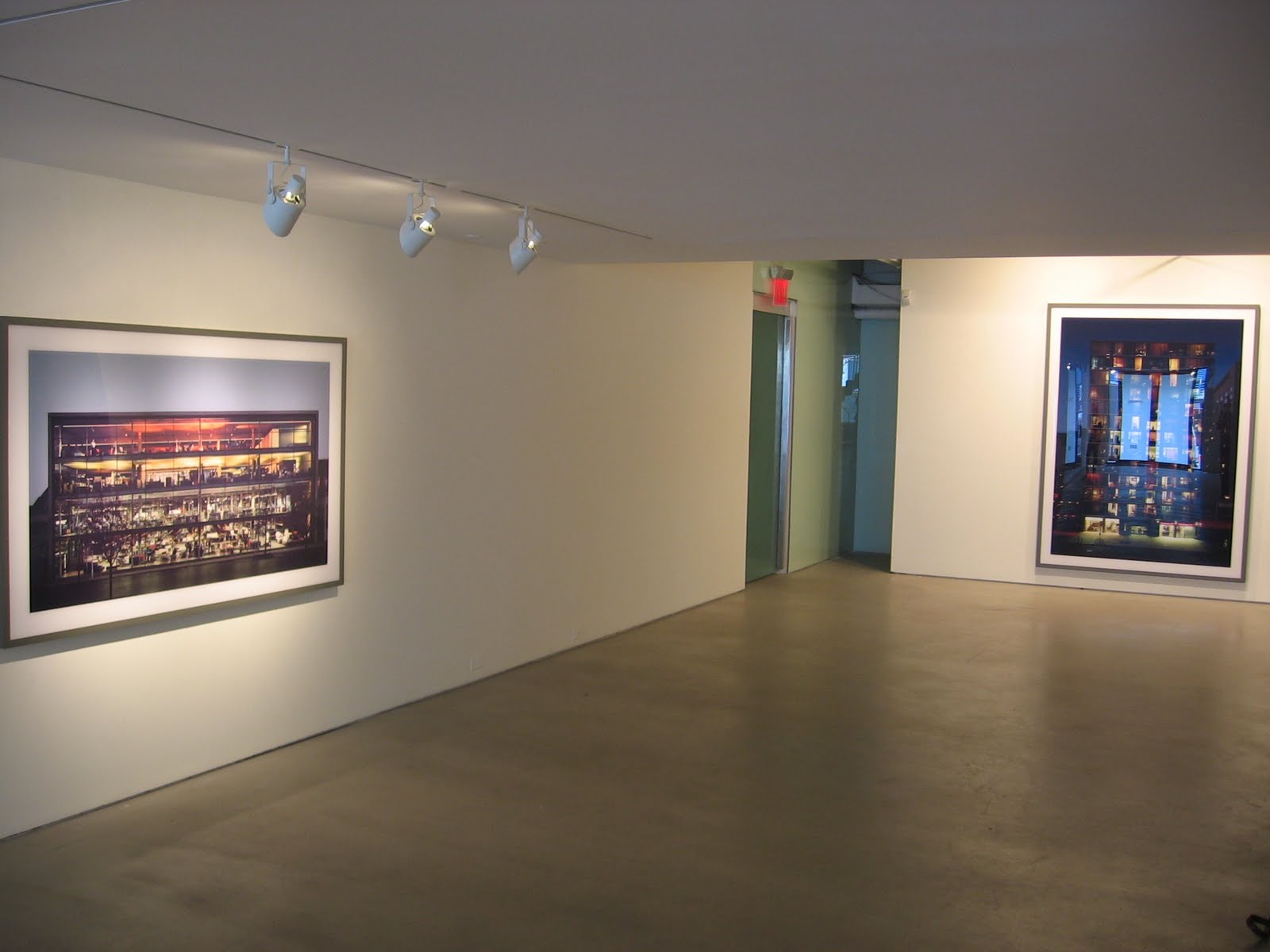 All of the works in this exhibit dissect the process of seeing and looking, pulling the viewer (who is also looking remember) directly into the frame, to peer through the brightly lit glass walls and windows of modern apartment buildings, hotels, museums, and storefronts at night. The geometries of the structures provide self contained boxes and boundaries for the interior action, like carefully controlled dioramas or theaters stacked together in grids, where cool antiseptic voyeurism meets the luridness and obsessiveness of the peep show. The boundaries of public and private are mixed and unraveled; people inhabit the buildings and fill the spaces, transforming them along the way.
.
Kim’s Saturday Night is the focal piece in this show, reaching floor to ceiling at roughly 10×15 feet. Each room in the hotel depicts a different nocturnal vignette, each drawn from actual newspaper stories and staged in candy-colored light. Boredom and loneliness compete with sexual perversion and violence; pleasure, pain, and emptiness are all on view, separated into isolated fragments. The viewer’s eye travels from story to story, frantically jumping from titillation to sadness and back again. 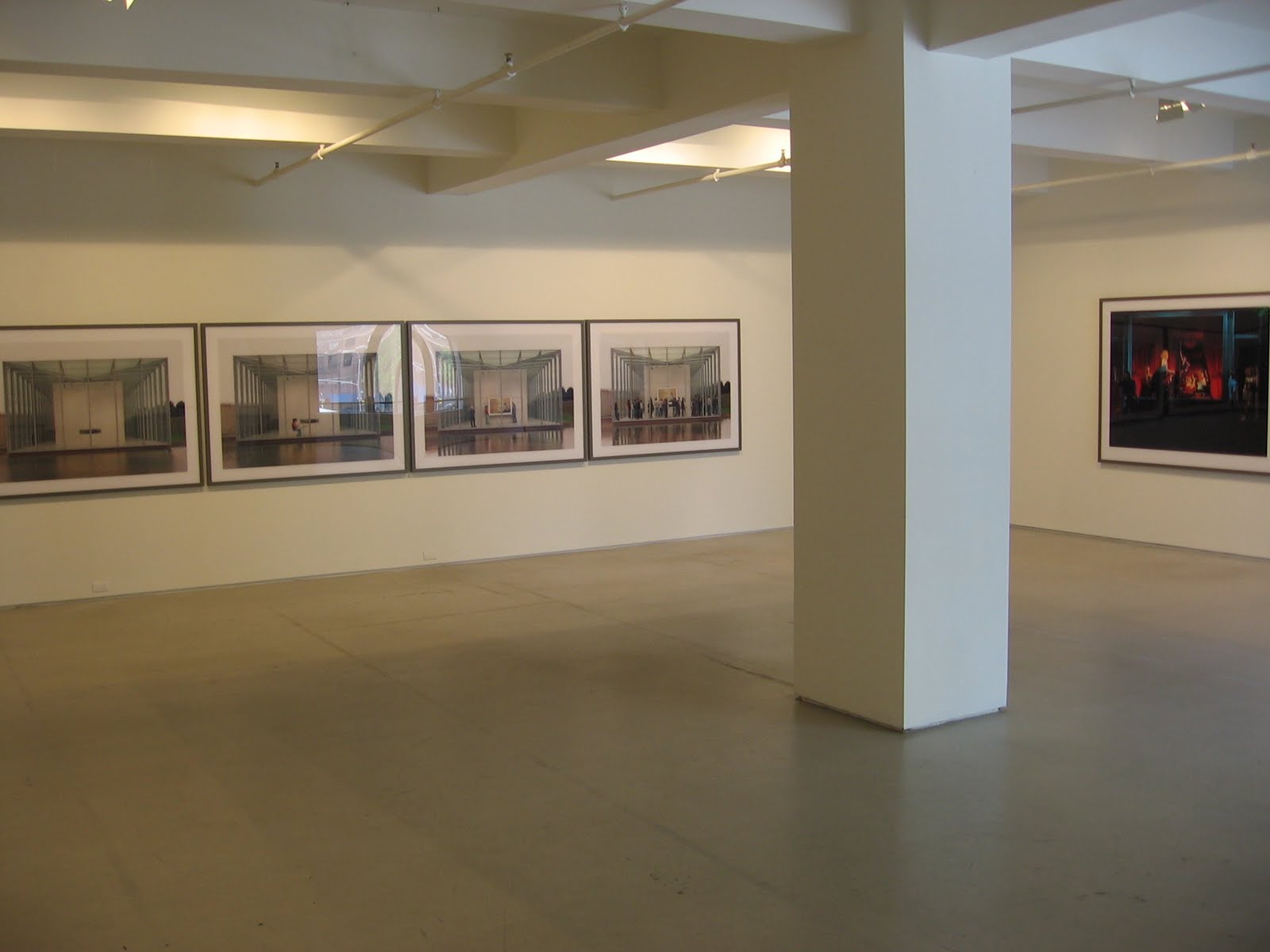 Other works in the show focus down on an individual scene, where the ideas of viewing, watching and display are examined more closely, from inside and out. In one image, a room full of dark suited men vie to bid on a naked woman on a pedestal; in another, a similar group of men “dine” on bloody women in bondage gear (viewed through a glass window). Her series Drug Store transforms this seeing in a more metaphorical manner: heroin and cocaine become staged scenes of a delusionally slimming/beautifying mirror and the fleeting pleasures of prostitutes on display in a streetside window.

Kim was a student of Thomas Ruff’s in Düsseldorf, and there is a pared down conceptual rigor that is refreshing here. Whether we see a glass box museum slowly filling with visitors or watch a sordid narrative unfold in pastel pink light, her ideas have clearly been reduced and refined to their maximum potency; the staging is tightly controlled and executed, with little in the way of superfluous distraction. The different bodies of work and projects on display explore her ideas in confident, interrelated ways, spanning the objectification of women, the meaning of our spaces, and nature of drug addiction. All in, this is one of the best debut shows I have seen in a while, combining 21st century photographic craftsmanship with strong and multi-faceted ideas.

Collector’s POV: Nearly all of the works in this show are priced between $18000 and $52000, roughly based on size. The exception is the massive print of Saturday Night in the entry, which is priced at $190000. In general, these prices seem quite high for a first solo show, but the work is accomplished, her pedigree is sound, and the large glossy prints will appeal to crossover contemporary art collectors. Kim’s work has not yet reached the secondary markets in any meaningful way, so it’s difficult to chart any real pricing pattern. A smaller print of Saturday Night did sell at Christie’s in London last year for roughly $50000. Kim is also represented by Richard Levy Gallery in New Mexico (here). While it doesn’t fit into our particular collection themes, I actually think Saturday Night is going to end up being considered an important/signature piece, rewarding those risk takers who get in early.
Rating: * (one star) GOOD (rating system described here)
Transit Hub:
In Sook Kim
Through May 8th
Gana Art Gallery
568 West 25th Street
New York, NY 10001
Twitter| Facebook|