JTF (just the facts): 14 large scale black and white seascapes (7 each of day and night views), 60×71 each, with silver frames and dry mounted without matting. In editions of 5. Installed in two separate sections of the gallery (described below). 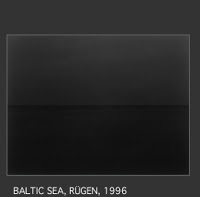 Comments/Context: Hiroshi Sugimoto has been making his seascapes since the early 1980s, and much has been written about their sublime qualities. If you have been under a rock for the past 25 years and somehow failed to see these amazing photographs, here’s a quick overview. Sugimoto uses a large format camera to make images of the sea, perched from on high and using a rigidly consistent formula, bisecting the frame into equal parts sea and sky. (Baltic Sea, Rugen, 1996 at right.) There are no boats, or people, or islands in these images, simply the water and the air, in all their subtle variations. These are contemplative pictures, that encourage a thoughtful response by the viewer, where the minute changes across the tonal spectrum become more apparent as you spend more time in front of the works, and a meditative energy seems to flow outward as you look more carefully. Sugimoto has said that the works are inspired by the idea of naming things, going back to early human history, when man looked upon the ocean and named it. And regardless of where the images were taken (and he has taken seascapes all over the globe), there is a timelessness to these pictures, a sense of balance and continuity.
In this exhibit, Sugimoto has enlarged the seascapes to wall sized images (roughly 5 by 6 feet each), which has the effect of making them less intimate, but more powerful. The artist has custom configured the gallery space for this show, so upon entering the gallery, there is a large open space, lit with natural light, with seven of the daytime seascapes arrayed along one wall facing the viewer. The size and scale of the images allows the nuances of the two elements (sea and sky) to radiate with more intensity than usual, and the sharpness of the prints and the smooth tonal gradations are not impaired one bit by the enlargements.
And then something spectacular happens. You walk to the end of the gallery and are led through a completely dark passageway, a short disorienting maze with a low ceiling (so low that the guard thought I might somehow injure myself and helped me along), only to be delivered to the other side, where the series of night seascapes are shown in complete darkness, the only light in the entire vast gallery being the spotlights which are placed exactly to fit the frames of the images. The effect is that the back wall behind the works disappears, and the images float in the darkness, and reflect onto the polished floor. I was the only one in the gallery at that moment, so the room was still and quiet, the only sounds the hum of the building and the muffled honks of the street. After my eyes had a moment to adjust, the subtleties of the dark seascapes came forth in all their glory, in a way that I had not seen them in normal daylight. I can hardly explain what a transcendent, unexpected and awe-inspiring event this was. I stood there for a long time. It was the most memorable gallery experience I have had viewing of a group of works in many, many years.
.
Sugimoto’s control of the environment for this exhibit made all these works new and fresh for me, even though we have been admirers of this body of work for years. My guess is that the wonder of the black gallery would be somewhat diminished by seeing this portion of the show along with a yammering horde, so I would highly recommend trying to see the exhibit at some random time when the crowds are gone.
Collector’s POV: I think that Sugimoto’s seascapes will stand the test of time extremely well and will later be called some of the masterpieces of the last part of the 20th century. These large scale images are museum quality, period. At $450000 each, they’re not cheap, especially in today’s economic environment, but I hazard to guess that these works will hold their value like few others in contemporary photography. And at worst, you can stand in front of one of these images and repeatedly find something new for years to come.
There is a small accordion fold exhibition catalog available for $20.
The artist’s web site can be found here.
Rating: *** (three stars) EXCELLENT (rating system described here)
Hiroshi Sugimoto: Seven Days/Seven Nights
Through December 20th
Gagosian Gallery
522 West 21st Street
New York, NY 10011
UPDATE: The show has been extended until March 7, and prices for the seascapes have been reduced to $360000, according to Bloomberg, story here.
Twitter| Facebook|