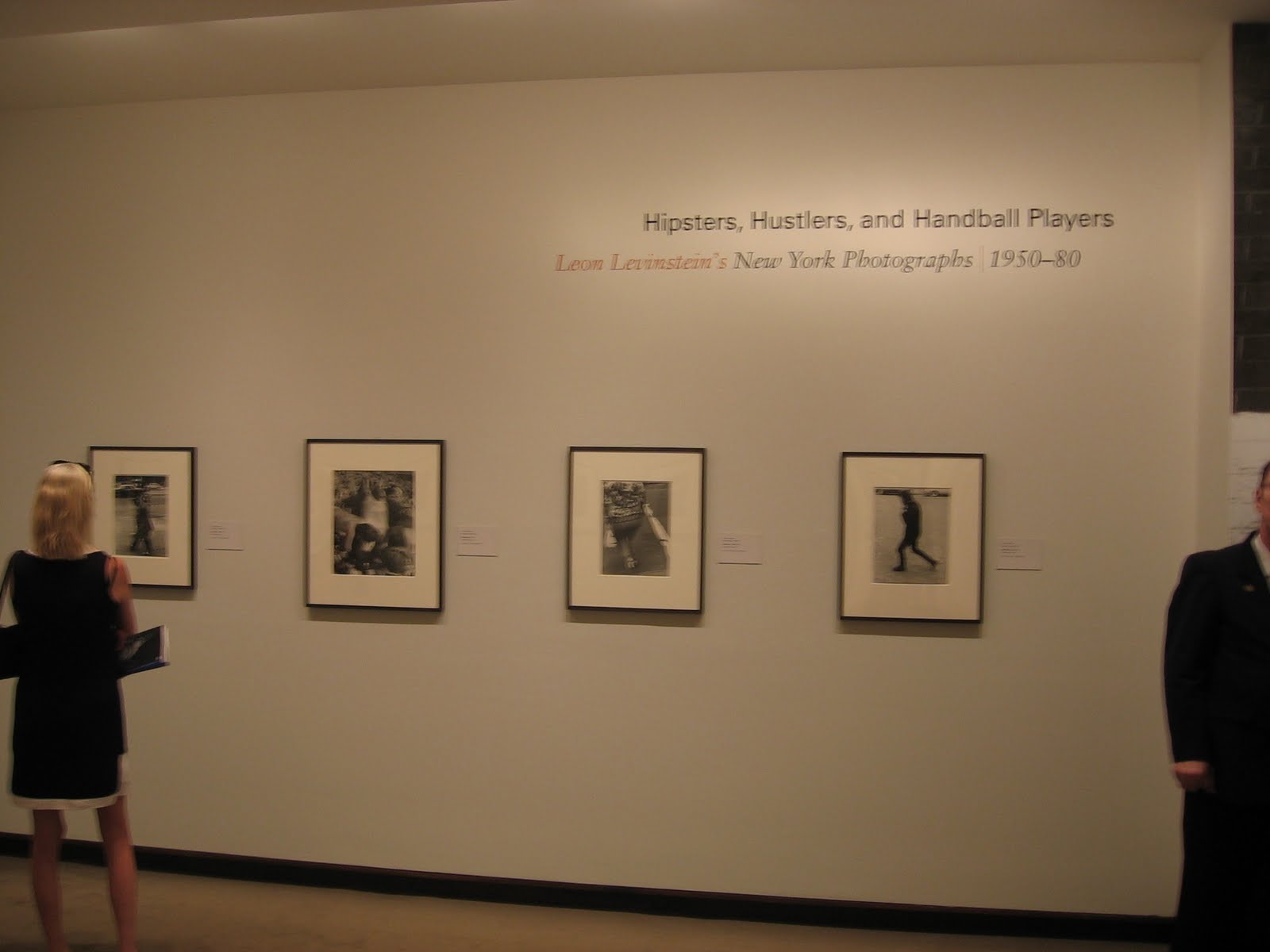 JTF (just the facts): A total of 44 black and white photographs, each framed in black wood and matted, and hung in the entry and three small connected rooms on the museum’s second floor. All of the works on display are vintage gelatin silver prints, made between roughly 1950 and 1980. A glass case contains four books: 3 US Camera annuals and the catalog from The Family of Man. All of the works have been drawn from the museum’s permanent collection. (Installation shots at right.)

Comments/Context: Leon Levinstein is one of those talented photographers who somehow fell through the cracks a bit and never quite got the art world recognition that he deserved. Unknown to most and categorized by some as a second tier, mid century New York street photographer, Levinstein has always seemed to be an afterthought behind Arbus, Frank, Winogrand, Klein, Levitt and others. This terrific show makes a solid attempt to remedy the situation, bringing together a broad sample of his best work from several decades. I think Levinstein’s gift lay in his ability to capture the essence of New York’s rough, funky cool (particularly in the 1960s and 1970s), without getting overly sentimental or kitchy. Nearly all of his images were taken at close range, often cropping out unneeded heads and body parts, focusing on overlooked subjects and elemental gestures found on the city’s streets and sidewalks. His compositions are often angled and dark, and he was particularly adept at capturing the nuances of clothing and fashion as worn by New York’s imperfect and eclectic masses, finding the hidden joy in a bold pattern, a wide collar or a tight fitting pair of shorts. The pictures are tough, edgy, sometimes harsh, and always refreshingly real.
As you look more closely at these candid pictures, Levinstein’s talent for making the common look uncommon shines through. He finds earthy wonder in a foot perched on a wire trash can, a sweat stained tank top, 70s-era moustaches, a grey pinstripe suit, bulging stomachs and belts, a man fluffing his afro in a window, eating corn on the cob on the beach, tattoos, an overcoat with shiny buttons, kissing on a stoop, and a groovy floral blouse paired with tight leggings. He seems to have been fond of backs and sides, abstracting his subjects into fragments of movement or pose, paring them down into types and moments that were representative of something larger in society. While I wish there had been a bit more scholarship or even a small monograph to accompany this show, I think this well-edited, energy-filled exhibit will help to expose Levinstein’s under appreciated gritty virtuosity to a much wider audience.
Collector’s POV: Leon Levinstein is represented by Howard Greenberg Gallery in New York (here). Levinstein’s prints have been available from time to time in the secondary markets in recent years, fetching between $1000 and $9000 when they have come up at auction. Nearly all of the images in this show were donated to the museum by collector Gary Davis.
Rating: ** (two stars) VERY GOOD (rating system described here)