This is Part 2 of our summary report on the 2017 AIPAD Photography Show. Part 1 of the report (here) covers the broad outlines of the fair, the new venue at Pier 94, the special exhibitions, the photobook area, and other overall reactions and analysis. It also incudes an explanation of the format used in the detailed sideshow below, so start there to get some context before jumping into the booth-by-booth image analysis. 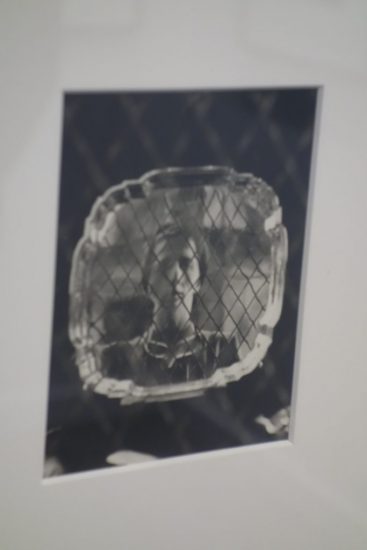 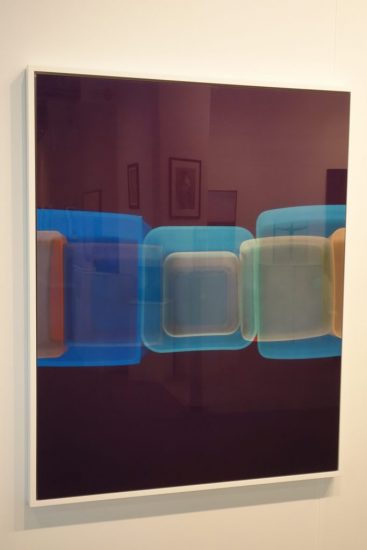 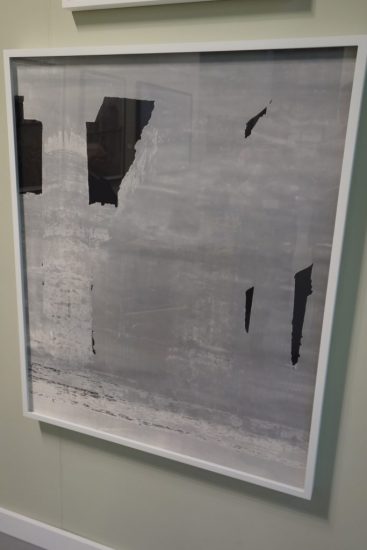 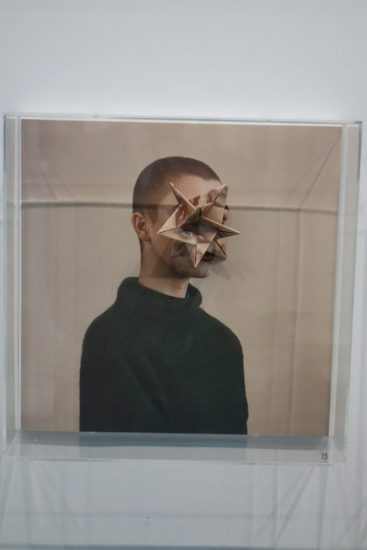 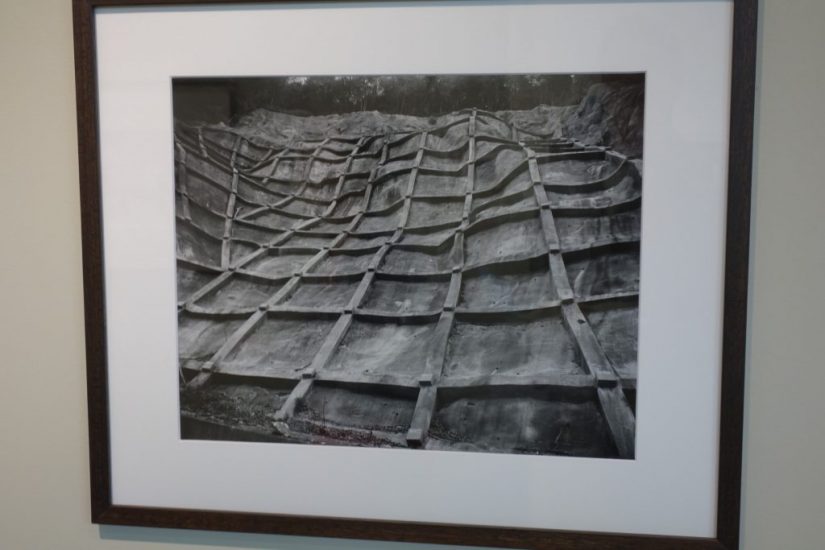 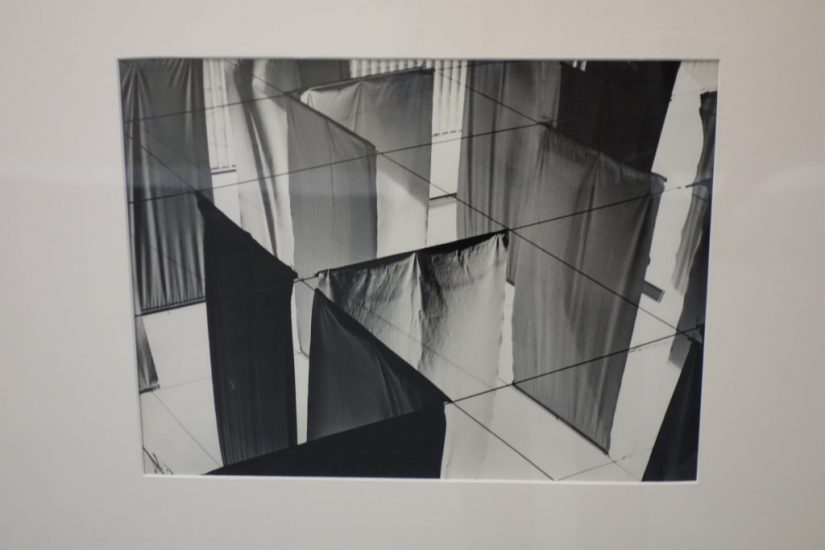 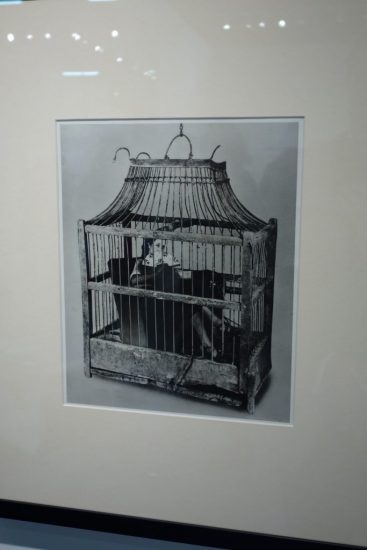 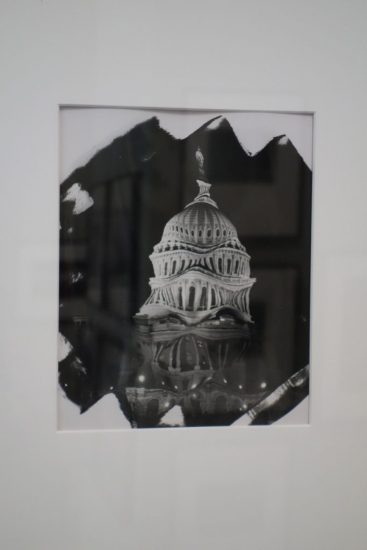 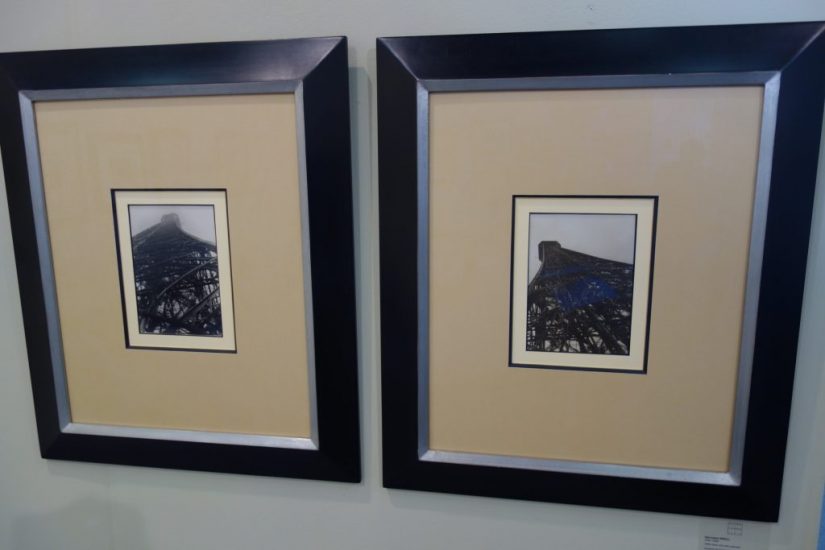 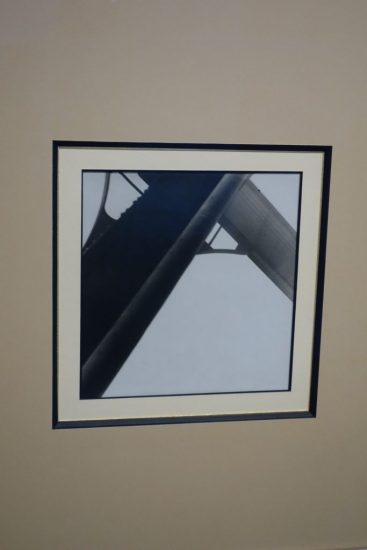 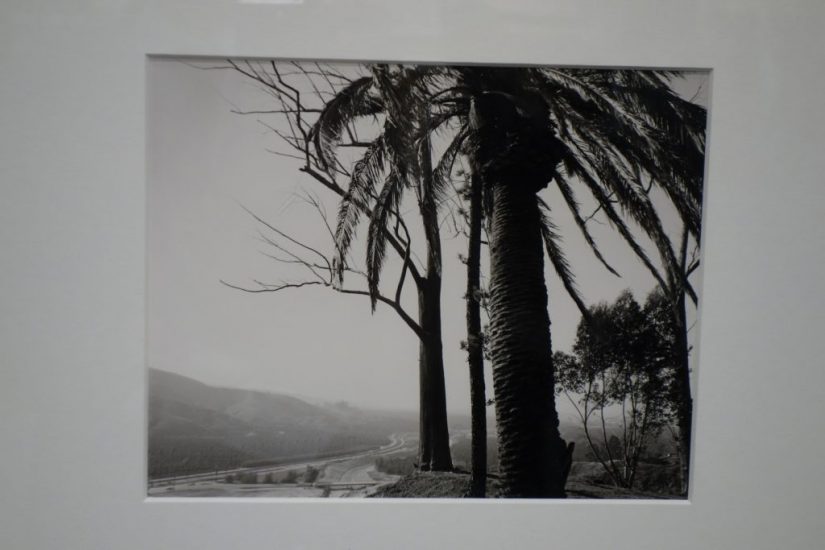 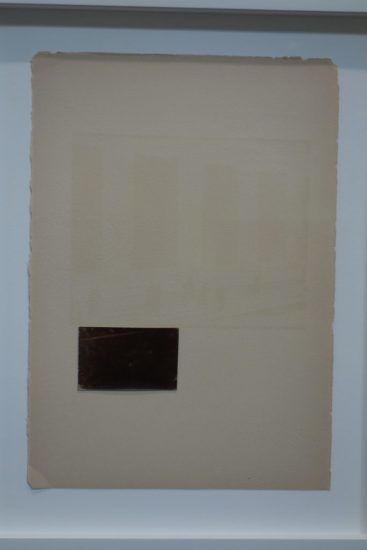 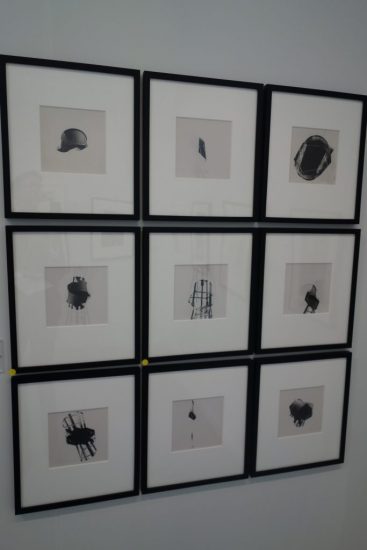 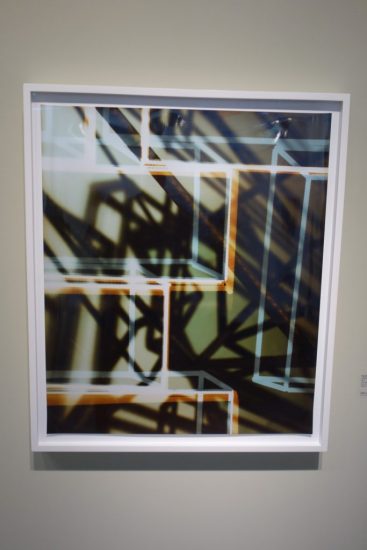 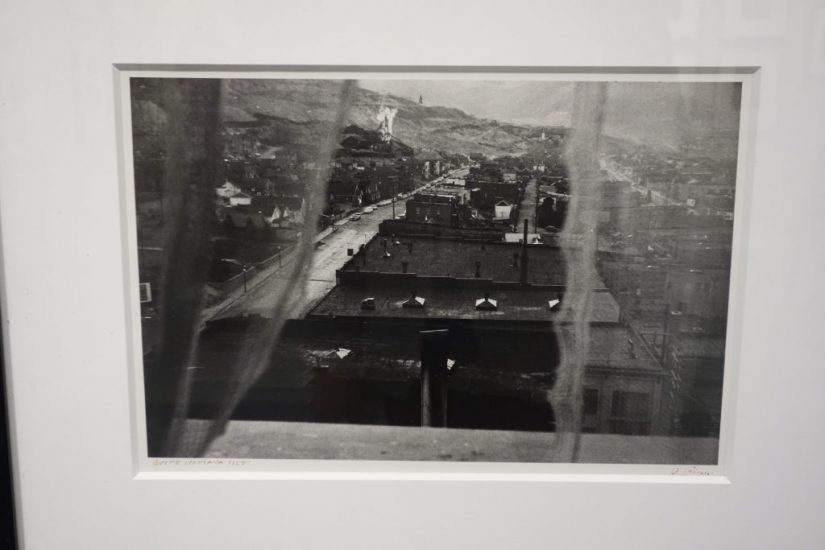 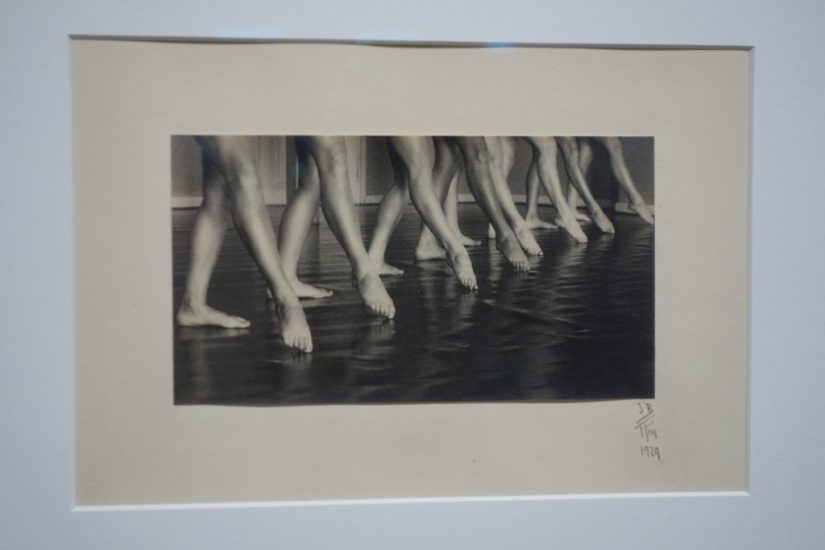 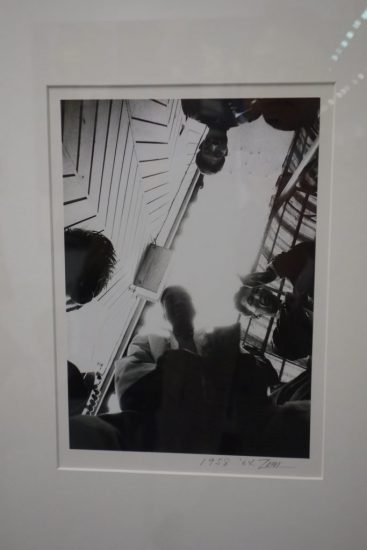 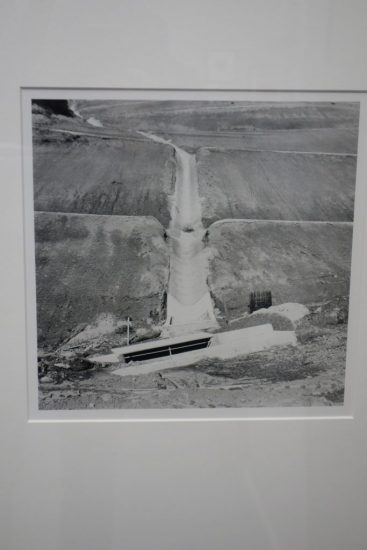 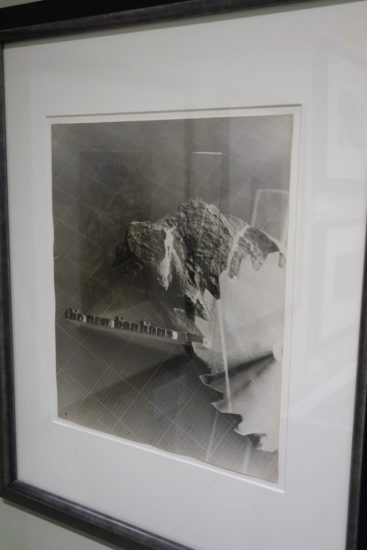 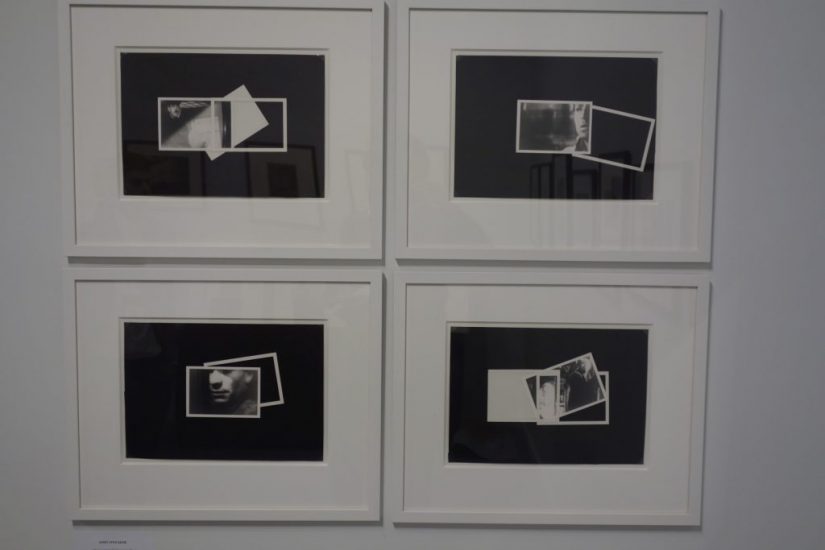 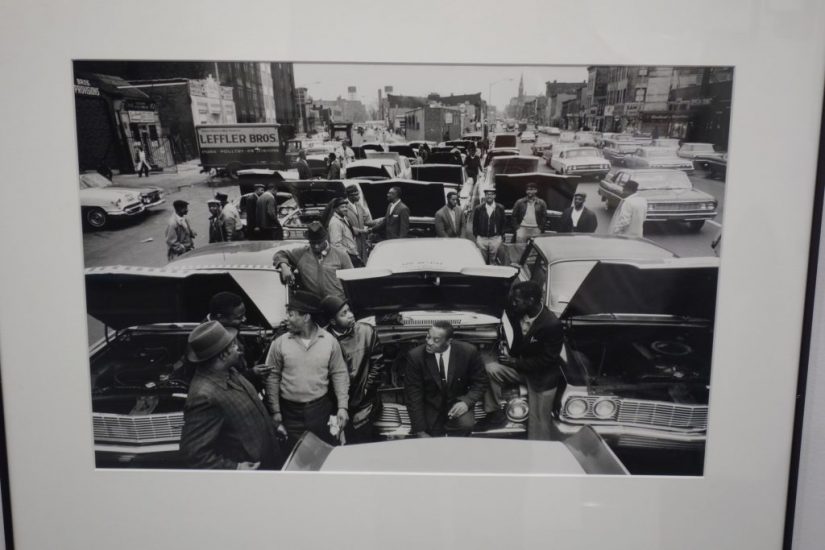 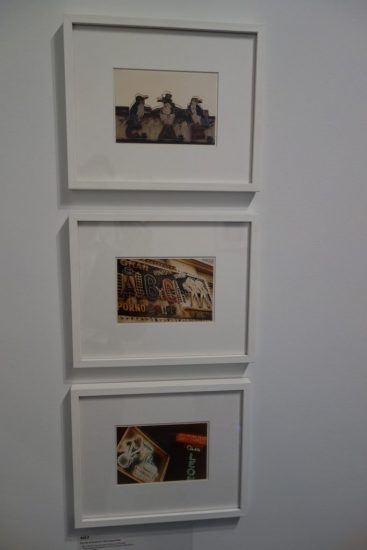 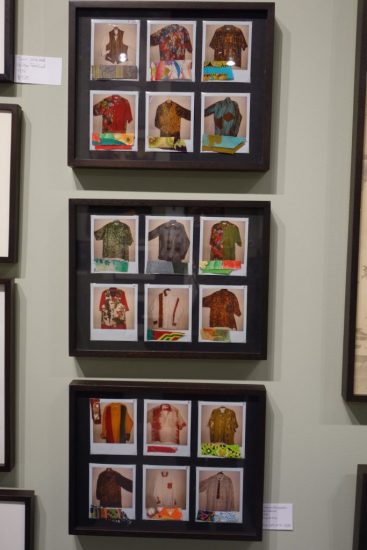 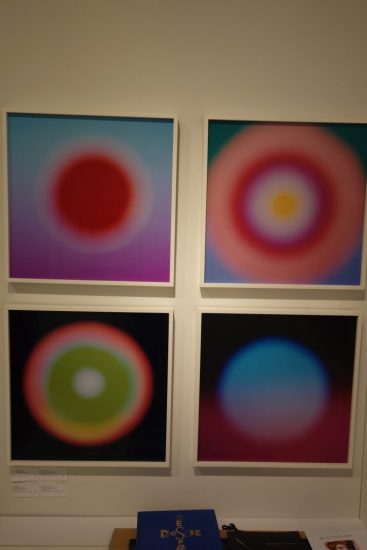 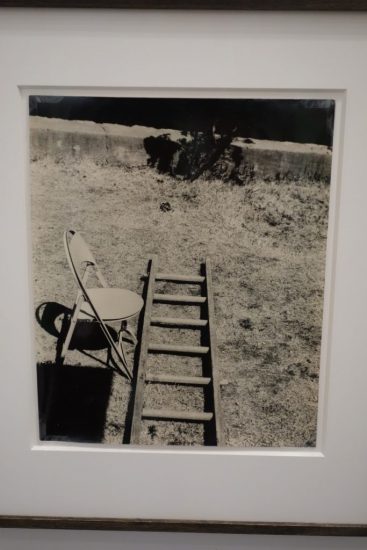 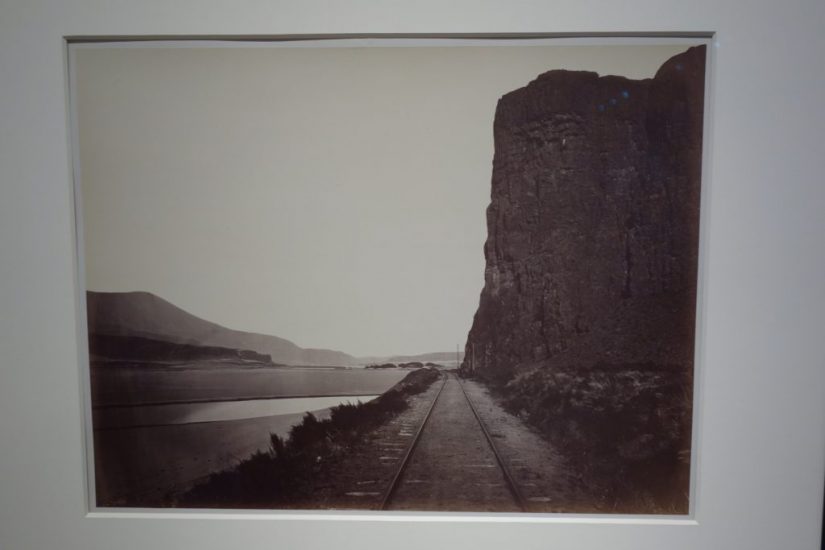 Steven Kasher Gallery (here): Vivian Maier, $9000. While Vivian Maier’s compositional talents are largely undisputed (at least by me), I have had a hard time getting comfortable with all of the posthumous prints that have been produced since her rediscovery, as they don’t take into account her decisions about editing, cropping, and printing. This booth featured a selection of scarce vintage prints printed by Maier herself, so in my mind, they better represent her actual artistic vision. This intimate self portrait reflected in a silver platter, with two layers of wire screen, captures both her quirky personality and her sophisticated eye for structure and framing.

Atlas Gallery (here): Richard Caldicott, $25000. Constructed abstractions that play with the properties of light are commonplace in contemporary photography these days, but this was the first time I had seen the transparent properties of plastic Tupperware employed to build up nested geometric forms. Multiple exposures allow the squares to float and intermingle, turning the mundane into something smoothly elemental.

Weinstein Gallery (here): Vera Lutter, $40000. This recent camera obscura work of the Temple of Nettuno in Paestum by Lutter is much more intimate than most of her views of cities and architecture. It’s also solarized, tweaking the usual inversion of black and white. The combined result is both briskly abstract (especially in the dark polygons of sky) and subtly textural.

The Photographers’ Gallery (here): Alma Haser, $1500. Alluding to futuristic personal image construction and plastic surgery, Haser’s origami-like extensions spill from the surface of her portraits like multi-faceted explosions. Their sculptural use of pictorial repetition creates eerie extended faces that are at once unsettling and strangely beautiful.

Galería Vasari (here): Alicia D’Amico, $7000. This early 1960s image of hanging cloth by the Argentinian photographer is harmoniously ordered. The wires create a perfect linear mesh, and the panels carve the space into rigorously tactile boxes in gradations of gray.

Nailya Alexander Gallery (here): Grete Stern, $25000. Many of Stern’s surreal photomontage sueños (dreams) from the late 1940s play on female roles and stereotypes, but this image of a seated woman in a birdcage feels more sharply satirical than most. Kept like a miniature pet, she flutters her fan seductively.

Keith De Lellis Gallery (here): Weegee, $4500. In our current political mood of uncertainty, this watery distorted image of the US Capitol feels somehow appropriate. Bent and bulging, the dome has been twisted out of proportion, like applying a carnival mirror to our system of government.

Galerie Lefebvre (here): Germaine Krull, $70000 for the pair. These upward views of the Eiffel Tower from 1927 capture the sweeping power of the iconic structure. Light blubs dot the edges of one side, while the swirls and layers of metal center the other. A close look uncovers the tiny lines of radio antennas at the very top, radiating like an energetic halo.

Galerie Lefebvre (here): Jaroslav Rössler, $65000. Rössler’s view of the Eiffel Tower pares it back to elemental Constructivist angles. A subtle blur softens the tones, allowing the image to dissolve into a linear criss cross against the shining whiteness of the sky.

Jörg Maass Kunsthandel (here): Robert Adams, $58000. While a sun kissed sandy beach might be more stereotypical, this Adams landscape is quintessentially Californian. With the hazy hills and curving freeway in the background, the bold figure of the dark palm silhouette dominates the composition. Adams almost single handedly redefined what a California landscape could be, and this image is a standout example of that vision.

Stephen Bulger Gallery (here): Alison Rossiter, $7500. Rossiter has extended her investigation of expired antique photographic papers in new works that match those papers with original pages from Camera Work. Here the Strand photogravure Wall Street has been removed, leaving behind a faint echo of itself. Rossiter’s developed paper (from roughly the same year) has a serendipitous angled line amid its discolored darkness, which she has used to follow the sidewalk in the Strand image, creating a time-warped dialogue of process and composition.

Stephen Daiter Gallery (here): Charles Swedlund, $6000 each. These water tower images from the mid-1950s use multiple exposures to disassemble the industrial infrastructure. Transparent fragments are interwoven, creating new abstract forms. Many have a ghostly feel, the areas of attention moving in and out of view.

Von Lintel Gallery (here): Farrah Karapetian, $4200. Karapetian’s smart new works use open rectangular cubes made of rebar as their starting point. The hollow cinder-block forms are then built into “walls” (a controversial topic these days), which become the basis for multi-layered images that mix photogram elements and photographic shadows. The end result abstractions are densely interlocked, the white and black lines jostling for ascendance.

Rick Wester Fine Art (here): Christopher Colville, $8000. Colville’s works use gunpowder as the artistic catalyst, the explosions creating burn marks and sparks of light that interact with the light-sensitive paper. This composition introduces a circular bandsaw blade into the pyrotechnics, creating a haloed solar form decorated by spots and flares.

Yancey Richardson Gallery (here): Mickalene Thomas, $25000. This new work by Thomas continues her grandly riotous use of clashing patterns. The confident model takes her cues from a Diana Ross album cover under the table, the florals, geometrics, and animal prints swirling together with glorious abandon.

Etherton Gallery (here): Robert Frank, POR. Frank’s melancholy image of the curtained rooftops of Butte, Montana, from The Americans won’t be a new discovery for many, but even though the picture is well known, this lovely vintage print still stood out from its surroundings. The contrast between the deep black buildings and the gauzy interruptions give the vista a sense of gentle sadness.

Joel Soroka Gallery (here): Ilse Bing, $35000. This vintage Bing image of ballet dancers has a lusciously creamy warm tone, with the shine of the floor and the legs gleaming with energy. The stylized lines of the 1929 signature are an added treasure.

Michael Hoppen Gallery (here): Shomei Tomatsu, $31000. This 1958 image from Chewing Gum and Chocolate is compositionally ambitious, with the steep underneath shot taken from an unusually vertiginous angle. The bright sky turns the gathered gamblers into hazy silhouettes, giving the scene an added dose of illicit haste.

Joseph Bellows Gallery (here): Grant Rusk, $5000. Rusk was a new discovery for me, and this early 1980s image of drainage construction in Glendale, CA feels like a worthy addition to the suburban imagery of Robert Adams, Joe Deal, Lewis Baltz, and others. The image is both highly ordered and quietly textural, the juxtaposition of the shaped dirt and smooth concrete creating a crisp contrast of surfaces.

Lee Gallery (here): Gregory Crewdson, $6000. This mid-1990s image is an excellent example of Crewdson’s most important contributions to contemporary photography. The black and white neighborhood scene is both entirely real and yet implausible, the woman planting her flower rows in the middle of the street creating the unexpected visual dissonance. The introduction of the cinematically surreal into an otherwise believable scenario is quietly inspired here, without the additions of heightened melodrama that have weighed down some of his more recent work.

Lee Gallery (here): John Stezaker, $18000 for the set of 4. These collaged images of television fragments are executed with sophisticated sense of compositional framing. The single screen shots are given depth and layering, introducing iterative connections and serial thinking in addition to complex geometric interweaving.

Monroe Gallery (here): Steve Schapiro, $4500. While the documentary value of this image of a “stall-in” protest at the 1964 World’s Fair is a given, the vivid repetition of the open car hoods is what gives the picture its durable power. The resistance turns into a sea of cavernous black openings, offset by shiny roofs and stylishly easy going protesters.

Rolf Art (here): Facundo de Zuviría, $6000 each. This both was a solo show of the Argentinian photographer’s work, designed to complement his current museum show at the America’s Society (reviewed here). These three vintage color works are not in the museum exhibit, further investigating the artist’s interest in the whimsical vernacular forms of neon signage.

Winter Works on Paper (here): Unknown, $1500 for the set of 3. These 1970s era Polaroids of shirts paired with swatches of fabric from each garment feel like a witty photoconceptual exercise. They inadvertently play with the medium’s image/object duality, adding an endearing fascination with oddball patterned fabrics. These could easily be hung with relevant works by Baldessari or Wegman from the same period and not feel out of place.

ClampArt (here): Bill Armstrong, $2500 or $3000 each. These hazy circular abstractions come at photographic seeing from an unlikely angle. Starting with painted constructions, the setups were then photographed with the focus set to infinity, creating the soft blur. In addition to the mystical aspect of that choice, the circles seem to pulsate as the viewer’s eyes try to compensate.

Richard Moore Photographs (here): Gjon Mili, somehow missed the price. This stop-motion multiple exposure image is both technically impressive and sinuously action-filled. The circuit of the drumsticks twists and turns with rhythmic precision, rising and falling like a wave.

Only Photgraphy (here): Osamu Shiihara, $4800. A recently published monograph of Shiihara’s work will certainly help fill in the backstory to this Japanese photographer’s artistic career. This elemental ladder and chair setup (in a rare vintage print) signals a different interest in formal relationships than is found in his expressive solarized nudes.

William L. Schaeffer/Photographs (here): Carleton Watkins, POR. This breathtaking print was the most notable 19th century work I saw at the fair. Taken at Cape Horn on the Columbia River in 1867, it sublimely balances the darkness of the looming rock face with the straightness of the train tracks and the sweep of the wide river. It’s the kind of image that should be brought out to educate people who complain that they don’t understand the draw of 19th century photography.