This is Part 5 (of 5) of our summary report on Paris Photo 2019, focusing on the far right area of the fair.

Part 1 of the survey (here) explains the format used in the detailed slideshow below, and sets the stage for the discussion. So while it is certainly possible to jump directly into any one of these individual reports and start digging, return to the beginning if you want a bit more context. Part 2 can be found here, Part 3 can be found here, and Part 4 can be found here. 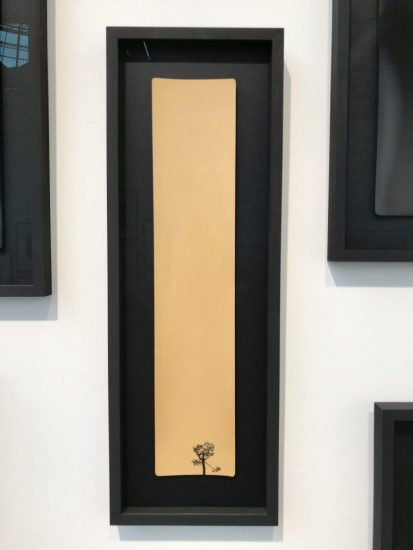 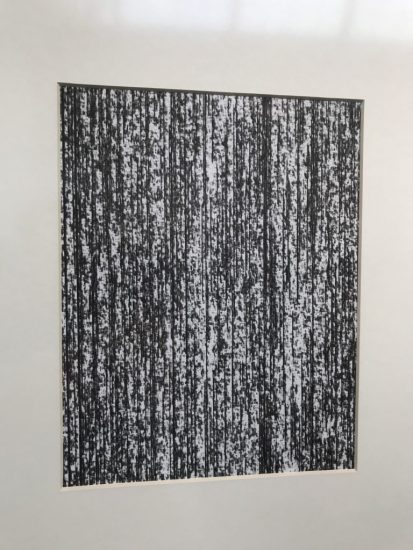 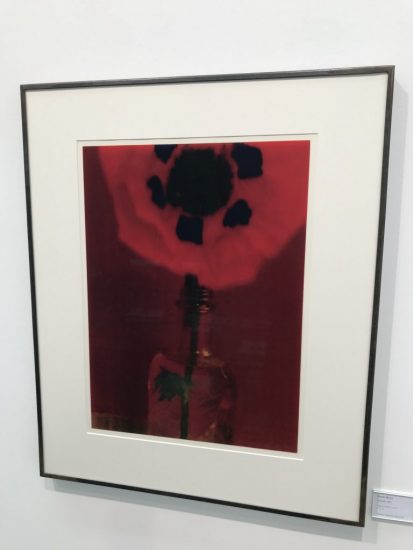 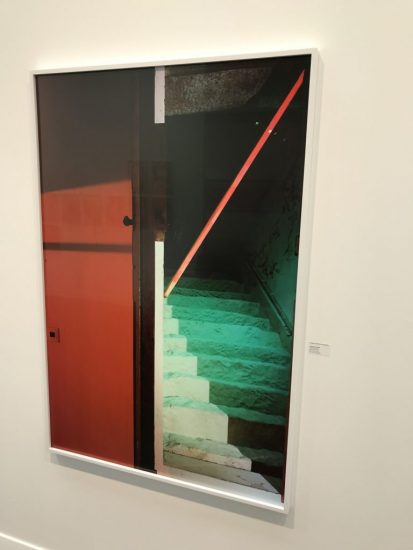 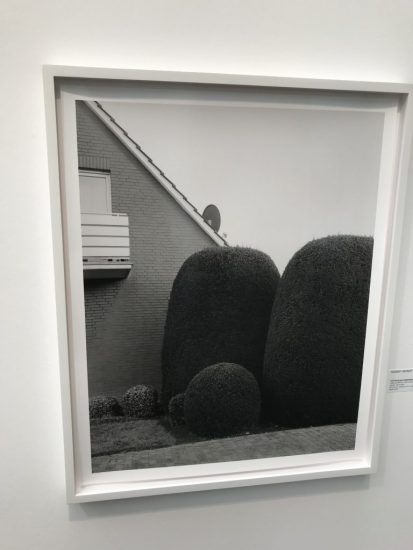 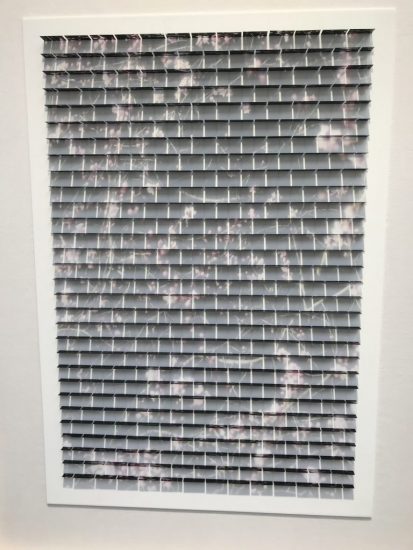 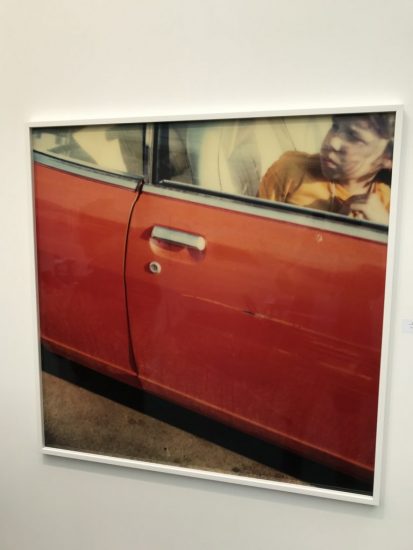 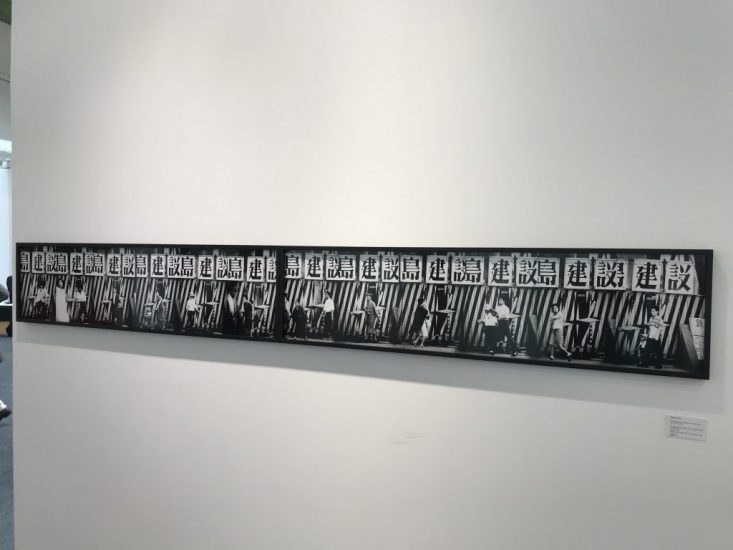 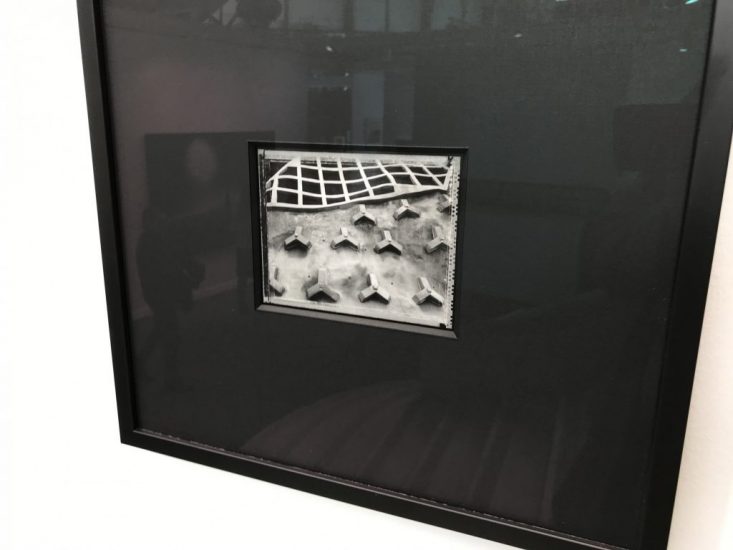 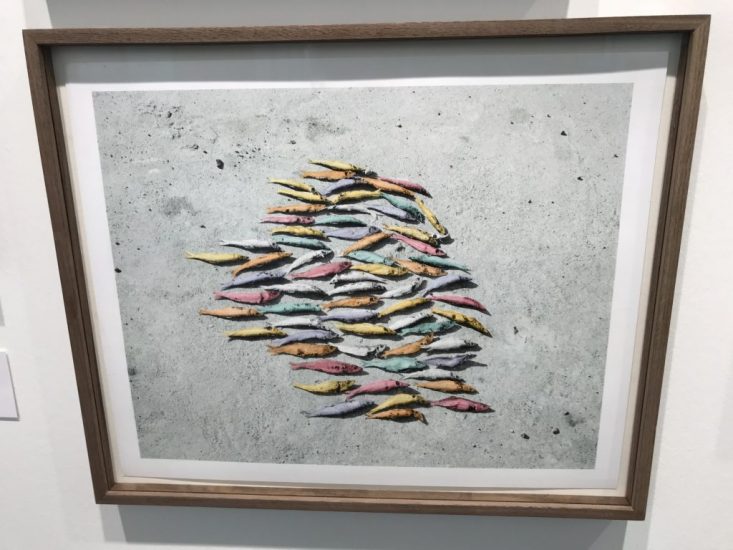 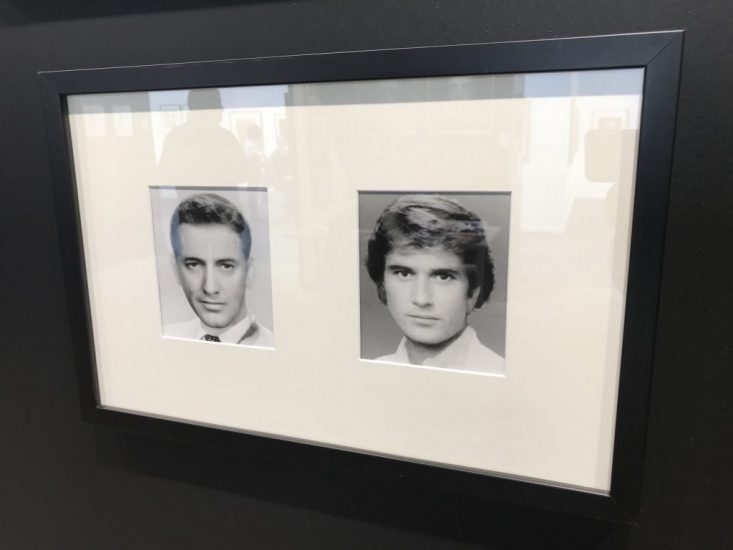 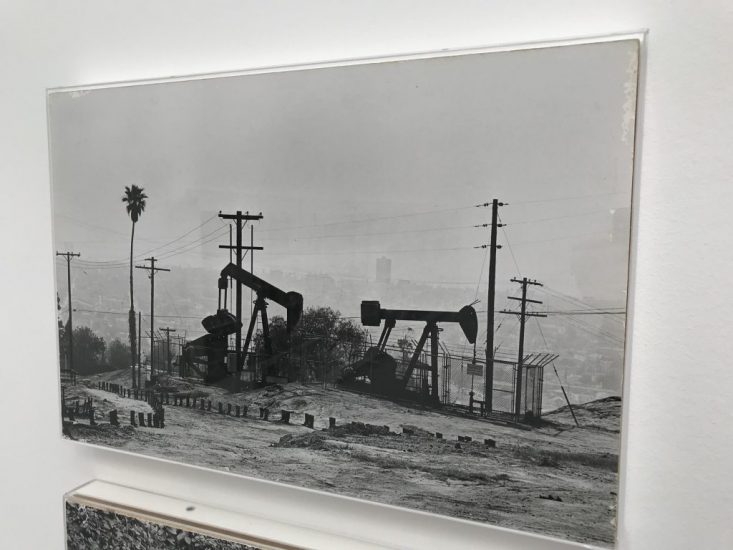 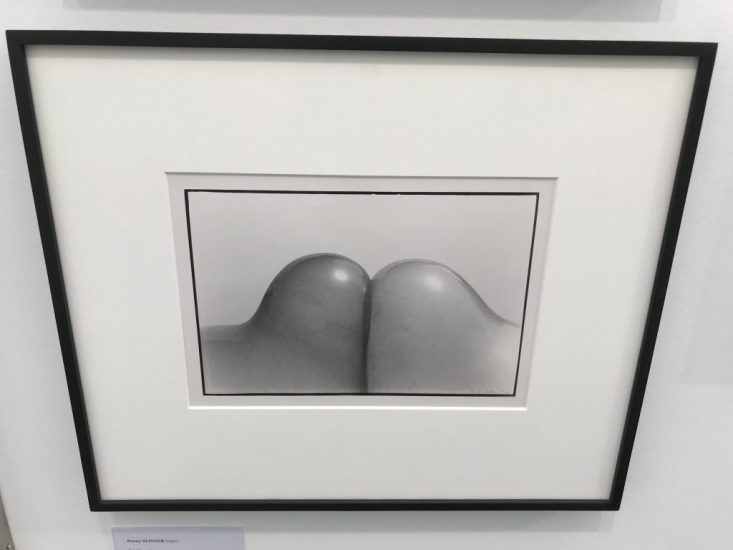 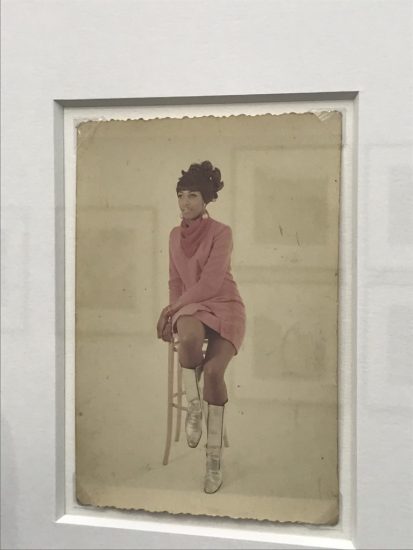 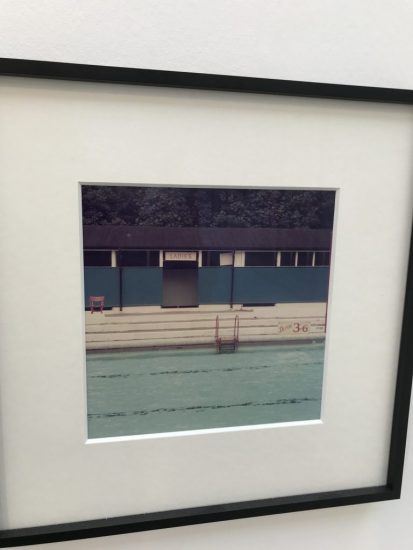 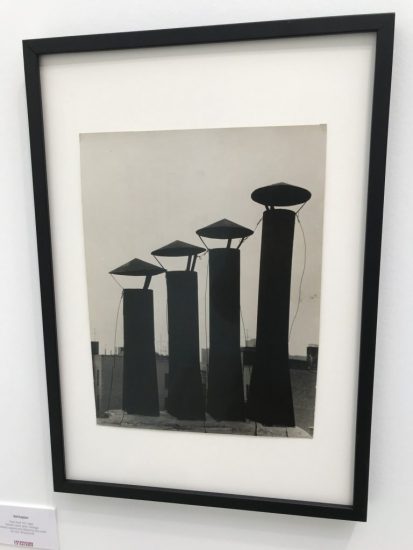 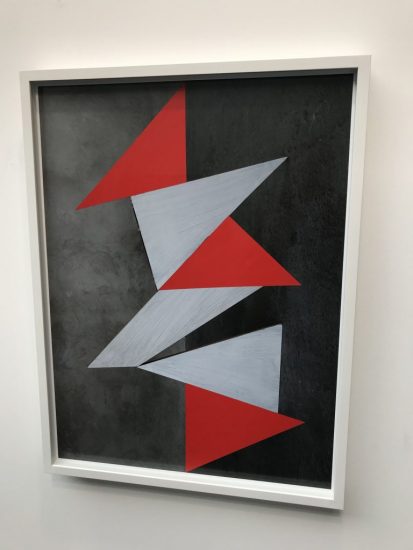 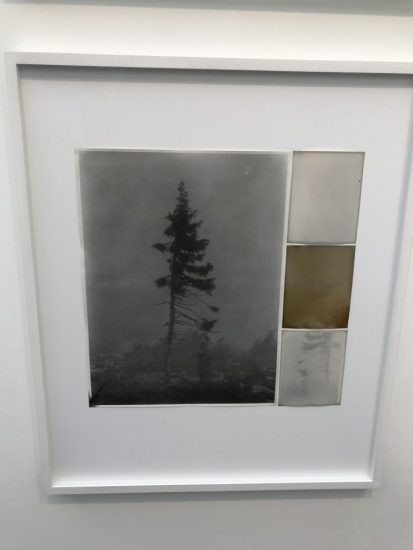 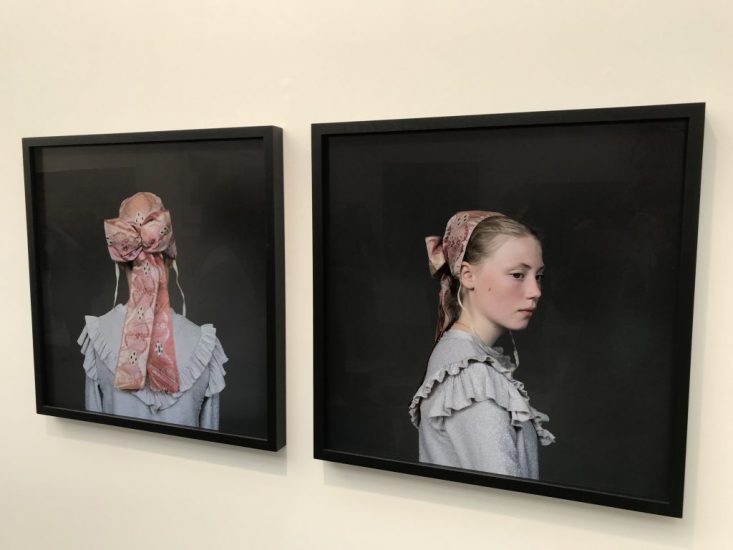 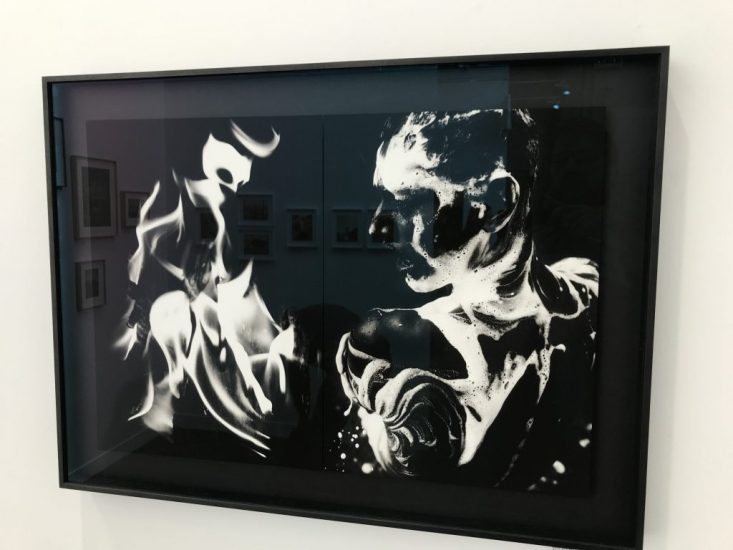 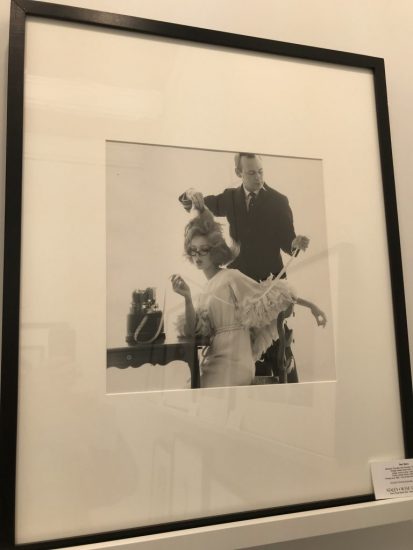 IBASHO (here): This long, thin work by Miho Kajioka takes the form of tanzaku poetry paper. A lone tree sits at the bottom of the highly unbalanced scroll-like composition, the quiet isolation focusing our attention. Priced at €1825.

Photon Galerija (here): This 1970s work by Bálint Szombathy turns the extraneous mechanistic noise of photographic transmission into its own stand alone artwork. The frenetic lines of static run vertically like dappled snowfall, refusing to resolve. Priced at €1700.

Galerie Camera Obscura (here): The richness of the deep red in this 1997 color carbon print by Sarah Moon pulls the image toward the aesthetic of Pictorial painterliness. The flower in the glass bottle looms forward, its mottled tones becoming pleasingly tactile and indefinite. Priced at €27000

Robert Morat Galerie (here): New works from Andrea Grützner filled the largest wall in this booth. Her precise re-imagining (and flattening) of everyday spaces is generally the same, but her use of colored light feels more pronounced than before, with tinted shadows adding to the deliberate geometric confusion. Priced at €6000.

Robert Morat Galerie (here): This surreal small town landscape comes from the recent series Kleinstadt by Ute & Werner Mahler. Shot in the former East Germany, the images center in on overlooked details, like these smoothly pruned trees that set off the sharp diagonal of the roofline. Priced at €2200.

M97 Gallery (here): The general technical premise behind Wang Ningde’s sculptural cast light works hasn’t changed over the past few years, but this new example (from 2019) shows that he’s extending the approach with more color. This dappled floral image is constructed by the light passing through tiny transparencies mounted perpendicular to the face of the white backdrop – when lit from above, shadows are cast below the each transparency, building up into a composite. While bushes and other natural vegetation have typically been his subject matter, the spots of pink here add bright vibrancy to the aggregation. Priced at €9500.

Galerie Esther Woerdehoff (here): It’s hard not to be seduced by the lush saturation of this orange car door image by Simone Kappeler. Taken in the early 1980s on a road trip across America and printed using the now discontinued Ilfachrome process, the angled sweep of intense color feels warmly nostalgic. Priced at €6500.

Polka Galerie (here): The bold graphics of the Japanese lettering and the angled striping give this 1961 black and white diptych of passing pedestrians by William Klein its punch. The twelve frames placed together into a repeating frieze create a visual rhythm, the comings and goings of ordinary citizens given a staccato beat. A modern print, priced at €18000.

Polka Galerie (here): Crisp architectural patterns undulate across the surface of this small image by Toshio Shibata like a graph paper grid and an array of propellers. While these man-made interventions likely serve to mitigate erosion, the motifs feel almost decorative. Priced at €1300.

Polka Galerie (here): Overpainted in light pastel colors, these fish take on a magical presence, forming into a tight school on the sandy beach. The image comes from Vasantha Yogananthan’s multi-photobook visual retelling of The Ramayana (we have reviewed two of the excellent volumes so far, here and here). In person, the blend of old and new, mixing photography and traditional Indian painting techniques, feels inspired. Priced at €4900.

Paci Contemporary (here): This booth was a solo presentation of the work of Nancy Burson, whose pioneering use of computer-based compositing is underknown. This 1984 diptych compares male movie star faces from two different ages – Grant, Stewart, Cooper, Gable, and Bogart versus Gere, Reeve, Gibson, Beatty, and Redford, their faces layered together to form averaged looks. Given our digital present, her works were way ahead of the curve. Priced at €8500.

Richard Saltoun (here): While Eleanor Antin’s 100 Boots project from 1972 is best known as in its postcard version (as mail art), this larger vintage print captures the empty black boots marching along near dusty pumpjacks. The rare print seems destined for a museum with an appreciation for 1970s performance/conceptual art. Priced at €24000.

Richard Saltoun (here): Renate Bertlmann’s 1976 works from the series Tender Touches put inflated latex condoms into intimate physical relationships with each other. This image is among her most elemental, arranging the teats as a carefully balanced pair. Priced at €5200.

Galerie Clémentine de la Féronnière (here): This 1967 fashion image by James Barnor, made in London while shooting for Drum magazine, is a rare vintage example of his work in color. Between the up hairdo and the silver boots, it’s a time capsule from the mod 1960s. Priced at €6000.

Galerie Clémentine de la Féronnière (here): The horizontal layers in this 1975 image by Peter Mitchell turn a mundane swimming pool image into a rigorously ordered stack, with flashes of red provided by a side chair, the pool ladder, and various signage. It’s a smartly constructed composition, and an early (vintage) example of color photography in the UK. Priced at €5500.

Les Douches la Galerie (here): Sid Kaplan is best known as a master printer, whose work for Robert Frank and countless others has cemented his place in photographic history. His own imagery is less known, but the deep blacks in this 1957 picture of rooftop smokestacks (made when the artist was just 19) are a testament to his nuanced understanding of contrast. Priced at €7500.

Bendana-Pinel Art Contemporain (here): This new work smartly extends Alejandra Laviada’s exploration of the intersection of photography and sculpture. Here she mas made a black and white image of a painted/constructed sculpture, with the red painted triangles added later to the surface of the print (which has been rotated in this case to further confuse our sense of orientation.) The work is bold, eye-catching, and deceptively sophisticated. Priced at €7500.

Martin Asbæk Gallery (here): This new work from Nicolai Howalt takes the world’s oldest tree (with a root system reportedly 9000 years old) as its subject. Using a variety of expired papers, Howalt has reprinted the negative multiple times, the details gently fading into the fogged mystery of memory. Priced at €3500.

Martin Asbæk Gallery (here): New works by Trine Søndergaard continue her use of vintage headpieces from Danish museums. In these images, the model mixes the traditional fabrics with contemporary clothing, creating subtle dissonances that enliven the elegantly refined portraits. Priced at €5600 each.

Galerie VU (here): Flames and soap suds become visually interchangeable in this powerful pairing of images by David Jiménez. Drawn from his Aura series (which was published as a notable photobook), the works settle into deep darkness, creating an almost hypnotic connection. Priced at €2800 for the diptych.

Staley-Wise Gallery (here): This 1962 image Bert Stern made for Vogue has a comic edge, with the ticker tape of stock quotes being read by both the man and woman. The staging is almost a slap-stick style parody, but that’s what gives the picture its enduring charm. Priced at €13500.

JTF (just the facts): A total of 19 color photographs, framed in white and unmatted, and hung against white walls in a single room gallery space and the office area ... Read on.