This is Part 3 (of 5) of our summary report on Paris Photo 2019, focusing on the middle right area of the fair.

Part 1 of the survey (here) explains the format used in the detailed slideshow below, and sets the stage for the discussion. So while it is certainly possible to jump directly into any one of these individual reports and start digging, return to the beginning if you want a bit more context. Part 2 can be found here. 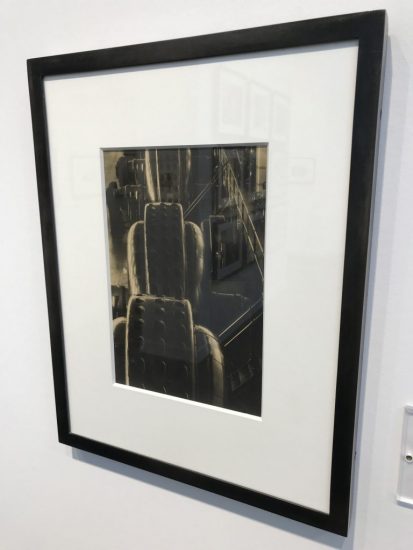 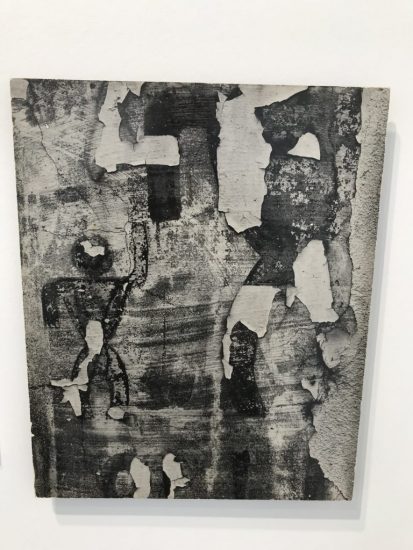 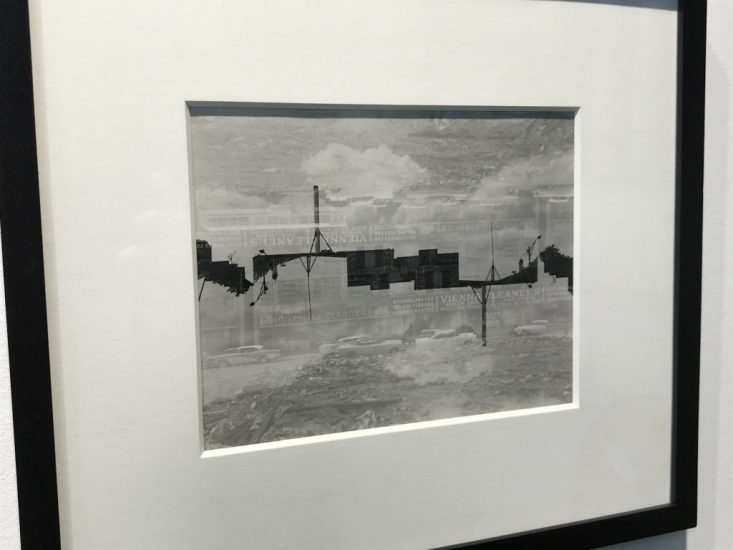 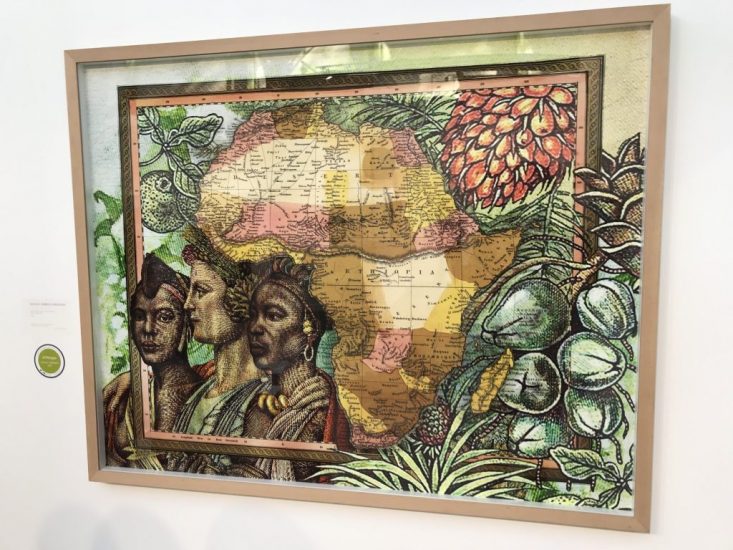 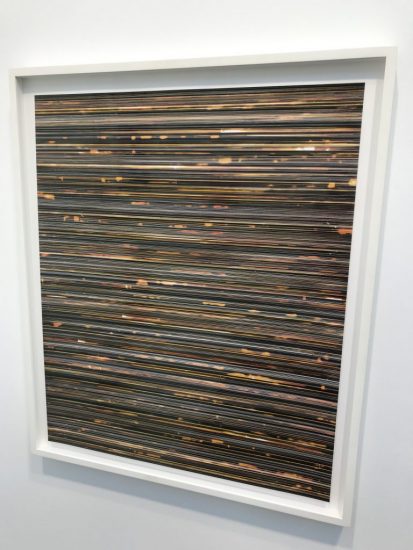 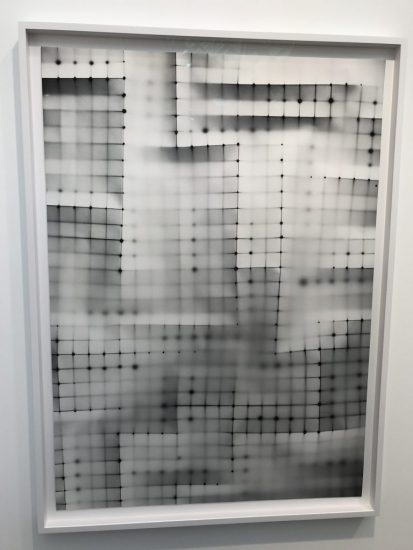 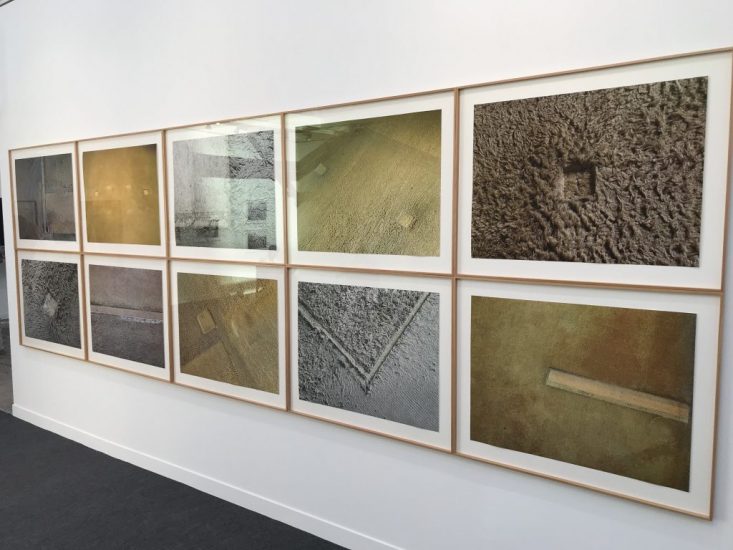 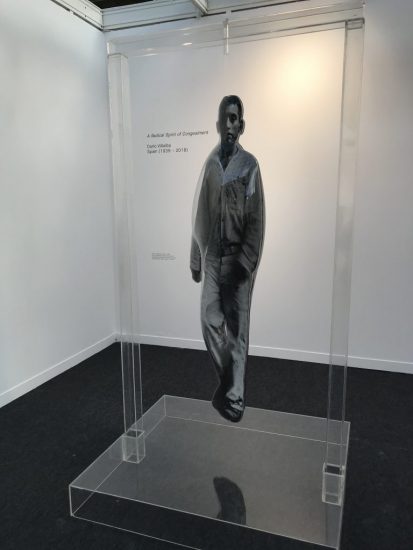 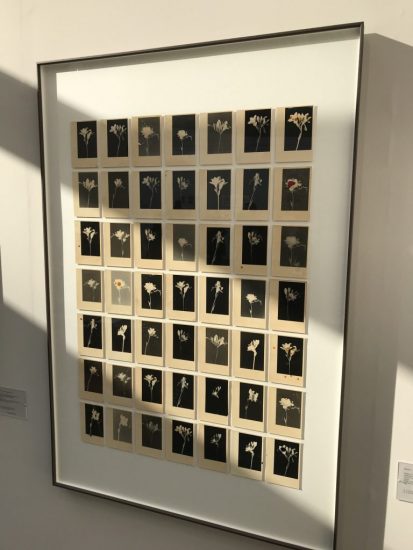 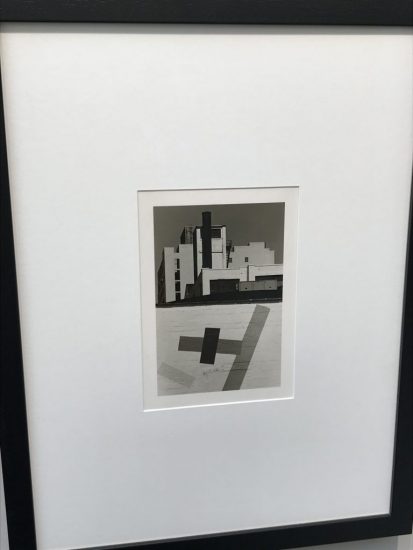 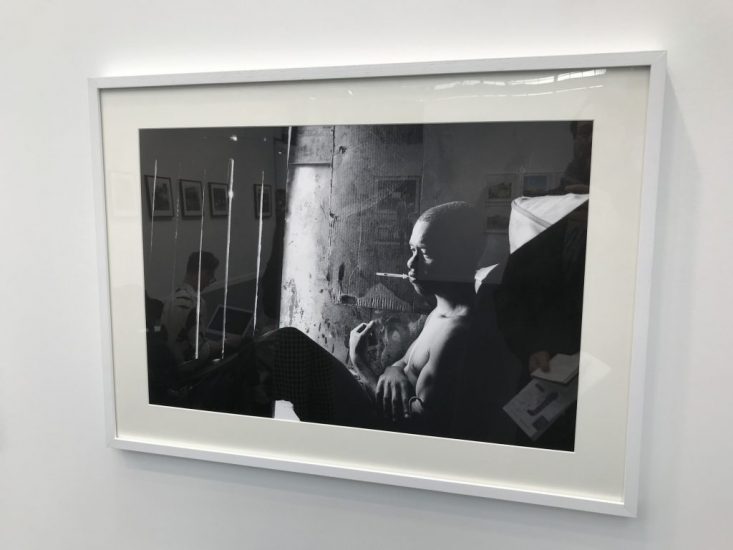 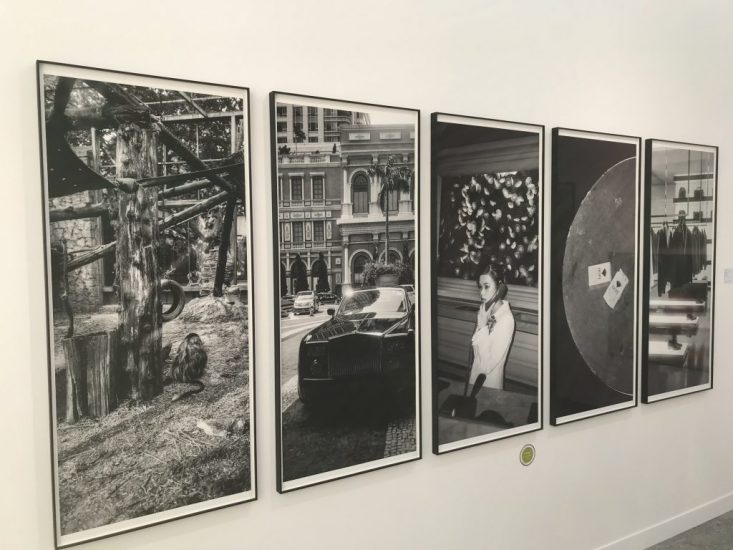 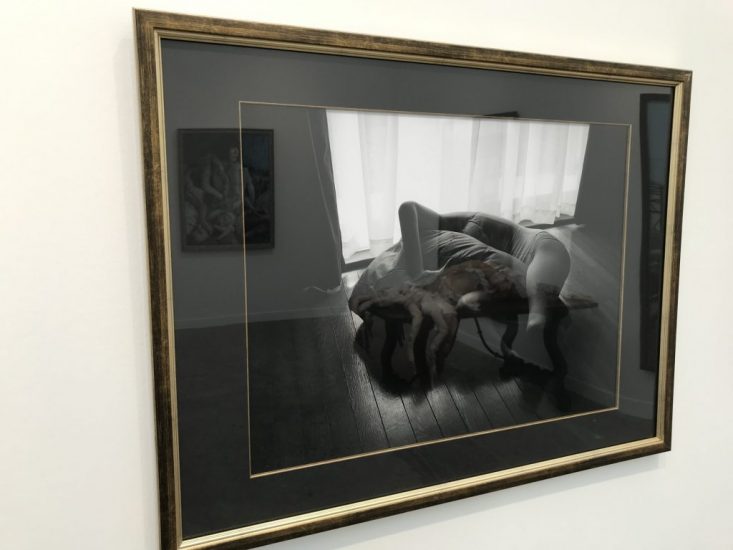 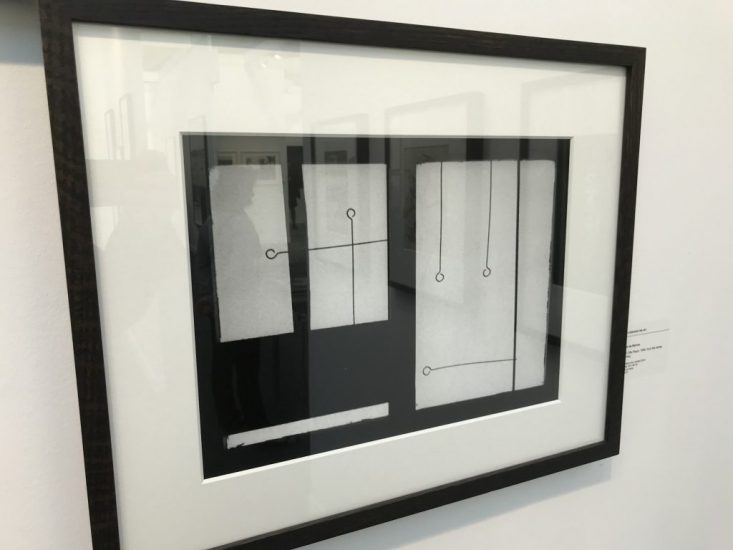 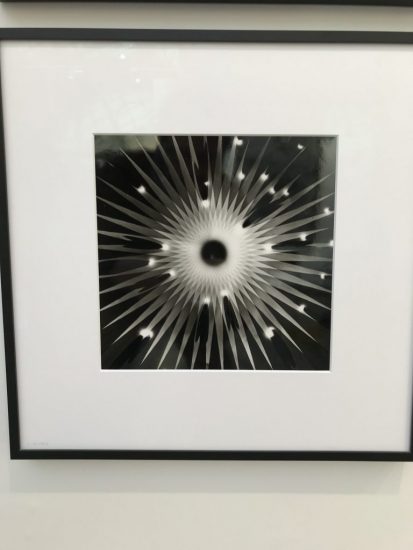 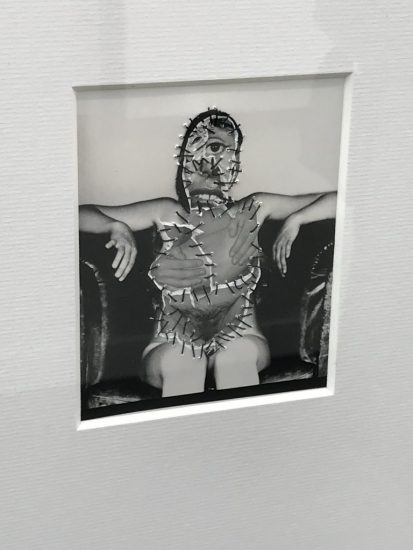 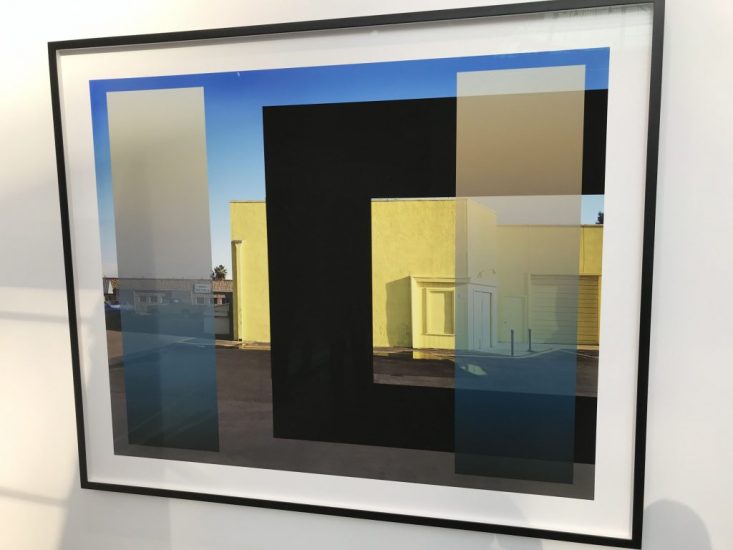 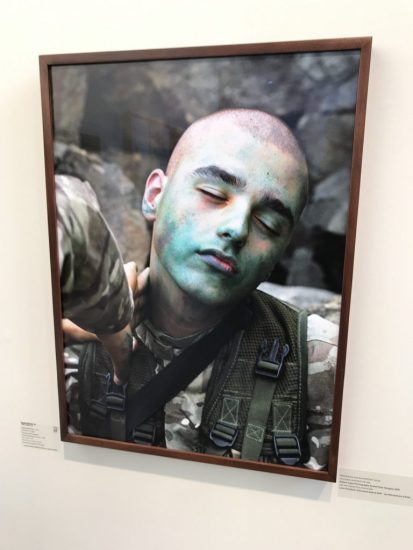 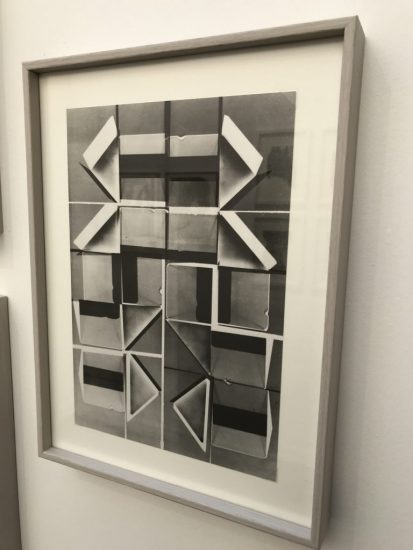 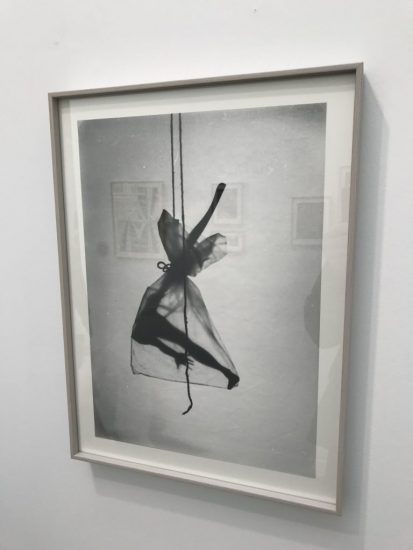 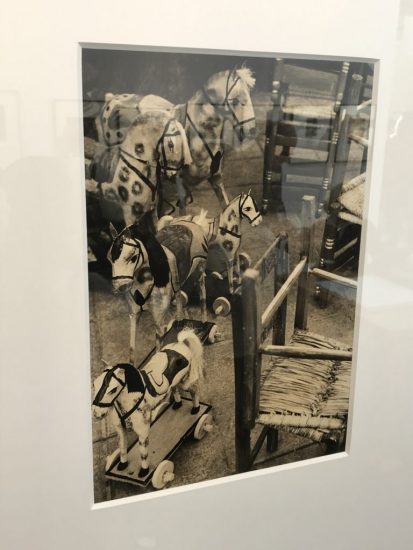 Stephen Daiter Gallery (here): This 1950s Aaron Siskind vintage print was mounted on Masonite board, giving it a bulky object-quality presence on the wall. The peeling paint and drawn graffiti intermingling and breaking down into texture and tonality make it a noteworthy example of Abstract Expressionist photography. Priced at $22000.

Stephen Daiter Gallery (here): The inverted double exposures in this technically innovative 1955 Charles Swedlund print layer the textures of dirt and sky together, with the insistent tops of the buildings aggregated into a jittering dark heartbeat across the middle. In between, the cars and storefronts of the city drift in misty softness. Priced at $8000.

Caroline Smulders (here): This booth was a solo presentation of the recent work of Malala Andrialavidazana from Madagascar. Her images digitally collage printed elements from maps, bank notes, stamps, and other materials into complex commentaries on history and geography. Here a 19th century map of Africa (with an oversized Ethiopia in the center) is provocatively flanked by a colonial era image of France with her arms protectively wrapped around her African charges. Priced at €12000.

Von Lintel Gallery (here)/Gitterman Gallery (here): Marco Breuer’s systematic horizontal scratches turn the face of this 2003 work into something resembling a field of static. The process-centric abstraction seems to shimmer on the wall, the surface seemingly in constant motion. Priced at $19000.

Von Lintel Gallery (here)/Gitterman Gallery (here): This new work by Christiane Feser places actual lacquer spots on a graph paper motif, creating the feeling of shadowy undulation. The blurred effect makes the overt physicality of the print that much more indeterminate and illusionistic. Priced at $18000.

Galerie Nordenhake (here): This set of 10 prints by Iñaki Bonillas attempts to document some of the hidden secrets at the Casa Luis Barragán in Mexico City. By removing the furniture from the private rooms, he reveals the ghosted impressions and indentations left in the shag carpet, the obscure geometries alluding to untold stories. Taking on the challenge of photographing the invisible, he smartly documents some of the available clues. Priced at €36000.

Galería Luis Adelantado (here): Dario Villalba’s walking prisoner (made in 1974/1991) is encased in a thick plastic bubble, plodding along in midair. The sculptural object is part of powerful series of works capturing people on the margins of society, isolating them inside clear plastic, with the back sides covered in mirror, bringing the viewer directly into those worlds. This work is an appropriation of a Danny Lyon photograph, adding an additional layer of photographic resonance. Priced at €180000.

Gallery Fifty One (here): In this recent work, Bruno V. Roels applies his theme and variation approach to a pared down floral still life. Photographs from various angles are repeated in alternate nuances of light and dark, with spots of red, yellow, and blue paint interrupting the surface. The result is a dense grid that circles and builds up into a richly attentive composite portrait. Priced at €10700.

Gallery Fifty One (here): This Louis Stettner urban scene from 1985 takes its cues from a high contrast painted mural. Stettner then arranges the skyline above into an echo of the interlocked forms and the light/middle/dark tonalities below, creating a bisected composition in clever visual dialogue. Priced at €14050.

Goodman Gallery (here): Recent Magnum Photos nominee Lindokuhle Sobekwa’s wrenching image of a man with a syringe in his mouth documents the current crisis of mixing anti-HIV medicines with heroin in South Africa. The lush contrasts of light and dark highlight the man’s resigned expression, pulling the viewer into the tight space of the room. Priced at €2000.

Carlos Carvalho Arte Contemporanea (here): Portuguese photographer Tatiana Macedo’s group of images offers a tight critique of the luxury lifestyle. Hope-brand cigarettes, Medusa jellyfish in the hotel lobby, sleek fashions for sale, and shiny cars set the framework, with the photograph of the monkey watching the man at the zoo inverting the question of who is trying to be seen. Priced at €4920 each.

SAGE Paris (here): While we recently reviewed Mari Katayama’s photobook Gift (here), this was the first opportunity I have had to see the prints in person. Many of the large color works in this solo booth show had hand embellished frames with shells and sparkles, but it was the quieter black and white works that caught my eye most. Here Katayama’s amputated limbs are sinuously intertwined with a sewn pillow, the cast light across the curved forms adding to their uncertainty. Priced at €4500.

Augusta Edwards Fine Art (here): The multiple exposure abstractions in Geraldo de Barros’ Fotoformas series are consistently engaging – nearly any of the works that covered a wall in this booth could have been happily chosen to illustrate his aesthetic approach. The overlaps and layers in this work are difficult to untangle, the image ultimately coalescing into a carefully controlled study in geometric proportion. A modern print priced at €5800.

Galerie Anita Beckers (here): This 1977 sewn photograph by Annegret Soltau seethes with raw personal emotion. The artist actively wrestles with the image of her pregnant body, the torn fragments brusquely reassembled into a searingly honest broken vessel. Priced at €3500.

Gallery Taik Persons (here): Grey Crawford’s conceptual studies in color were another discovery for me at this year’s fair. This work from 1981 (reprinted at large scale in 2019) uses masking to interrupt a painted yellow loading dock, with black boxing and color gradients reordering the balance of the composition. As the project gets more widespread re-discovery, it will be intriguing to watch how this series gets placed back inside the historical arc of both color photography and photoconceptualism of the late 1970s/early 1980s. Priced at €12500.

TOBE Gallery (here): The ecstatic eyes-shut expression on the gloriously camouflaged face of this young man, almost like the kind found in a religious painting, seems incongruous with his militant garb. Máté Bartha’s striking portrait comes from a series of images taken at summer military camps for Hungarian kids, and turns a seemingly ordinary task into something filled with sensual meaning. Priced at €2500.

ACB (here): This 1987 photogram abstraction by Agnes Eperjesi systematically documents every facet of a glass prism. As the object rolls from face to face, the image captures the geometries of the light that passes through it, alternately creating glowing triangles and striped rectangles. Priced at €2900.

ACB (here): The Hungarian artist Ferenc Ficzek experimented with shadows in many of his conceptual works from the late 1970s, and this work uses a cut paper form in a transparent plastic bag to create the visual trick of a cleverly disorienting hanging body. Priced at €6000.

Charles Isaacs Photographs (here): This 1930s print by the Mexican photographer Emilo Amero lushly pairs rolling wooden hobby horses and thatched chairs. The tonalities of this print are impressively lovely, with sharp contrasts and tactile surfaces giving it an engaging shine. Priced at $8000.

Part 4 of this report can be found here, with Part 5 here.