This is Part 2 (of 5) of our summary report on Paris Photo 2019, focusing on the middle left area of the fair.

Part 1 of the survey (here) explains the format used in the detailed slideshow below, and sets the stage for the discussion. So while it is certainly possible to jump directly into any one of these individual reports and start digging, return to the beginning if you want a bit more context. 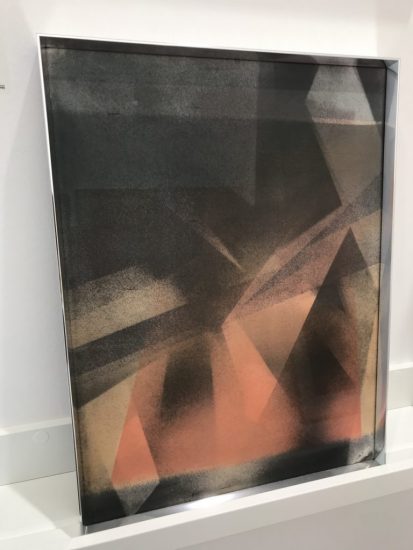 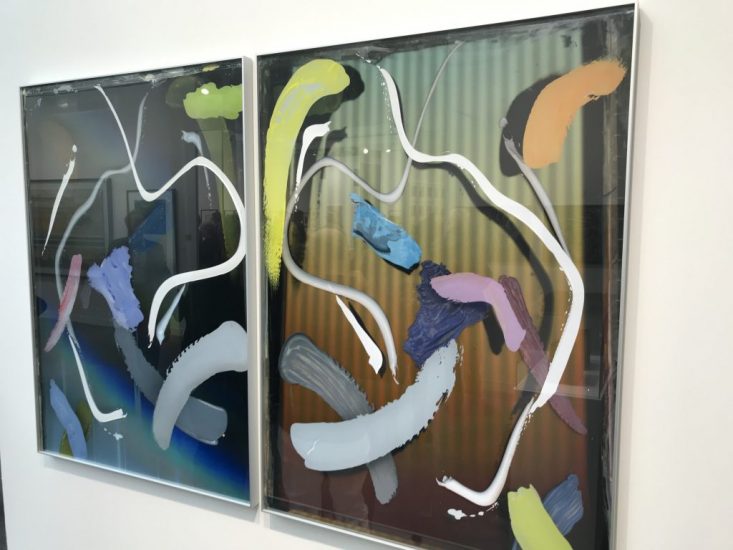 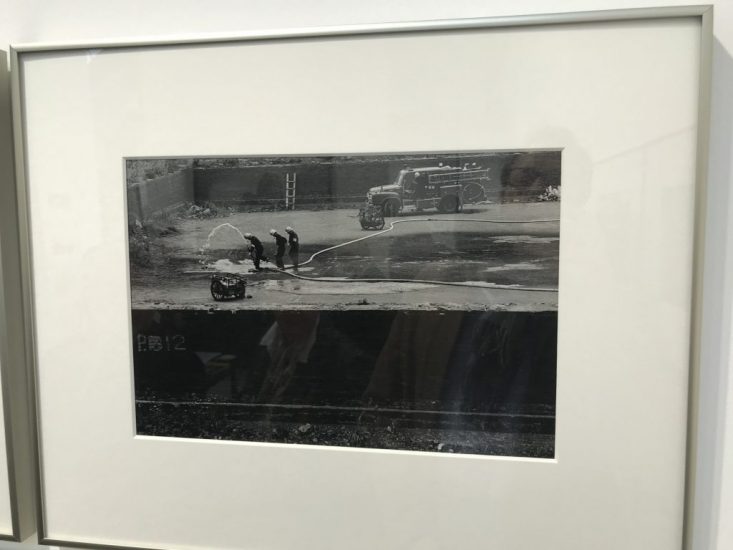 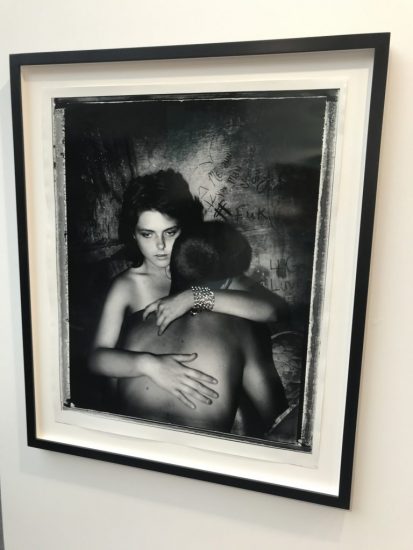 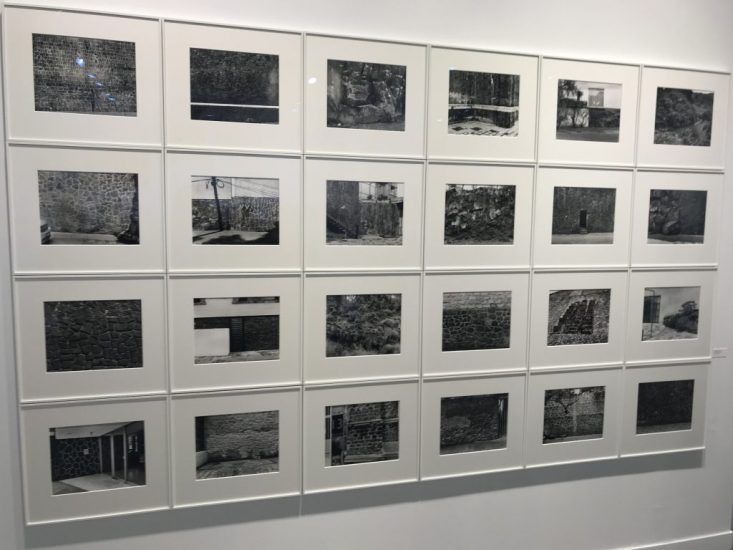 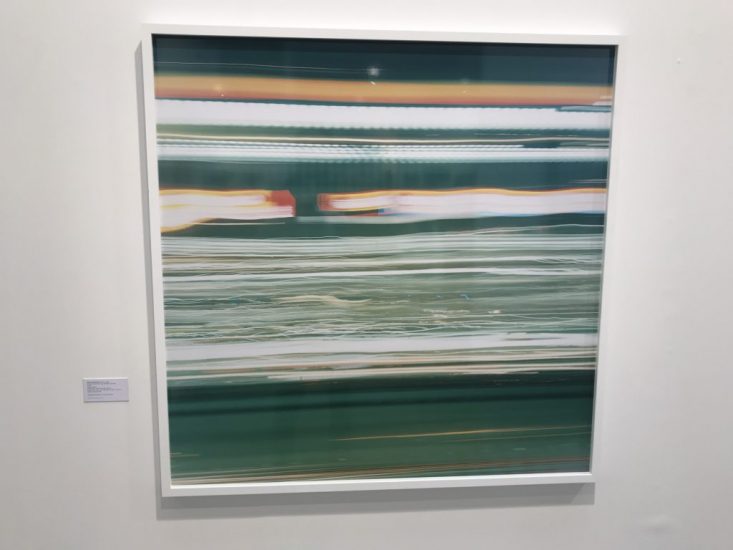 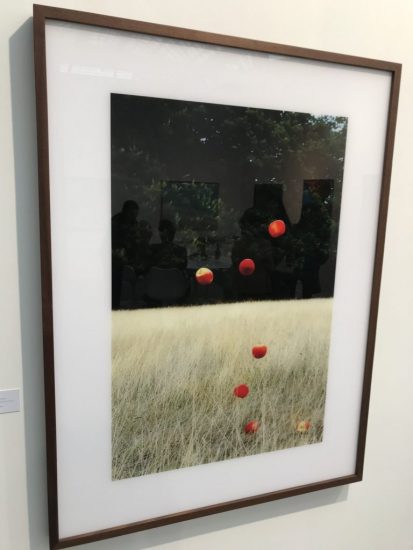 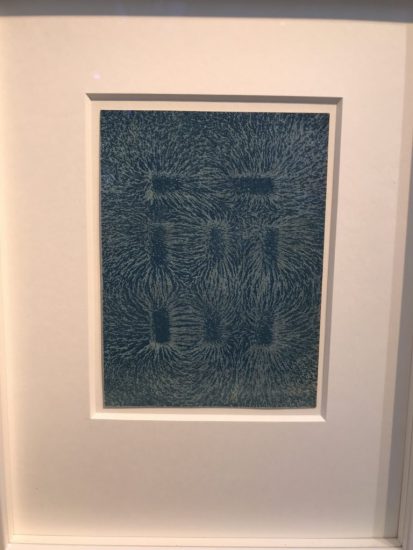 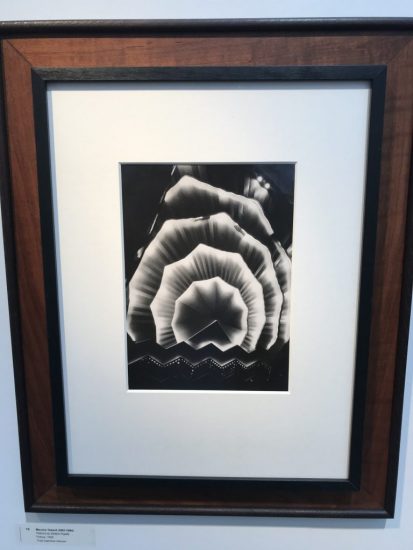 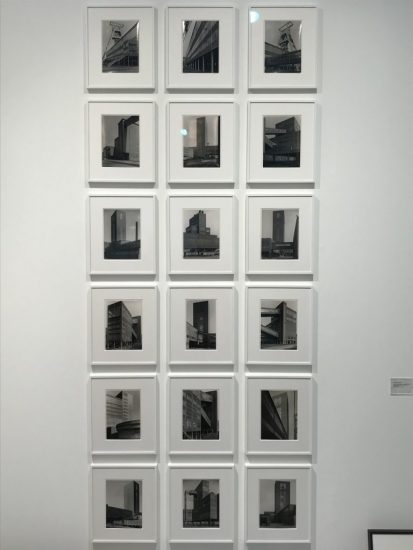 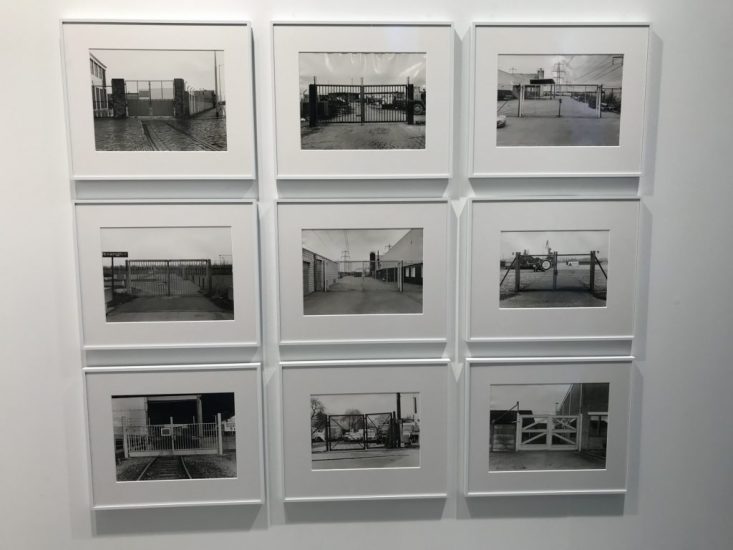 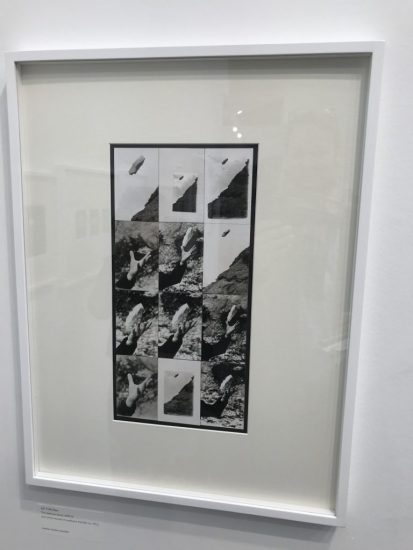 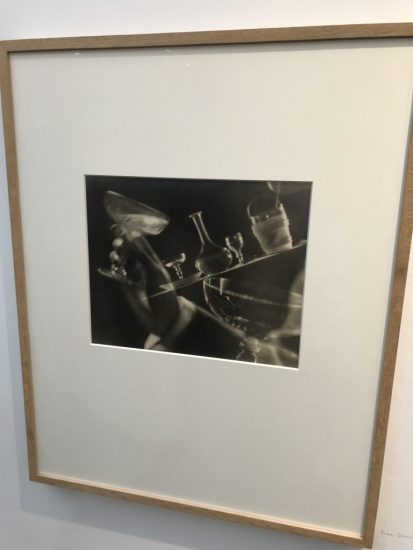 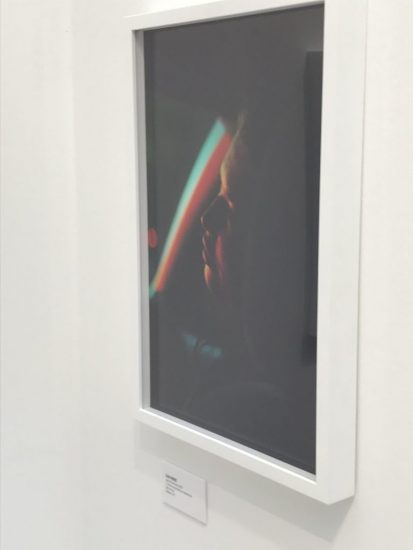 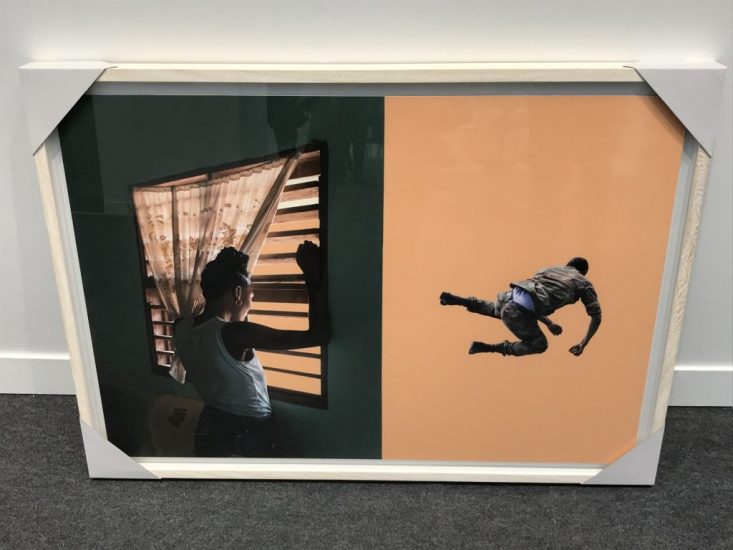 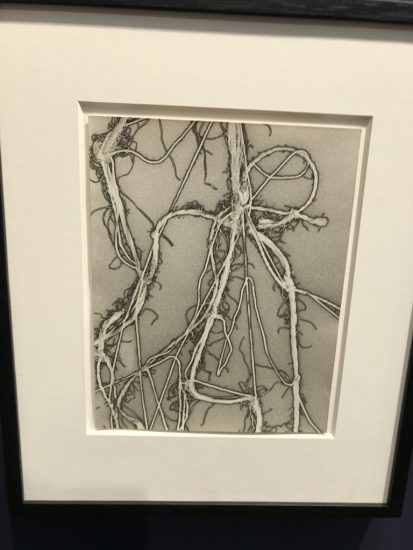 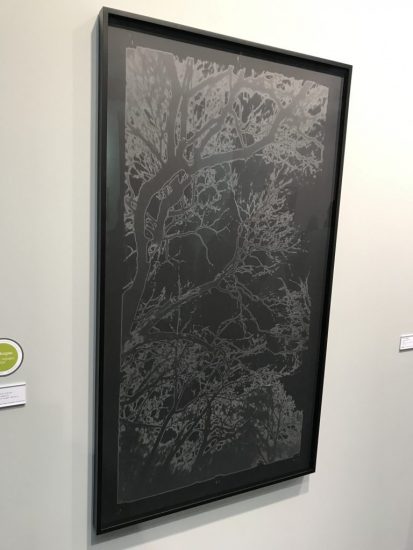 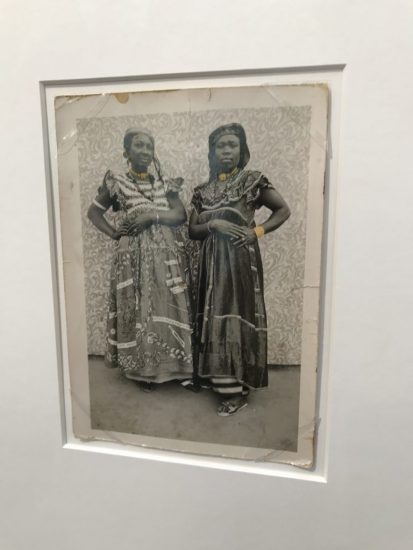 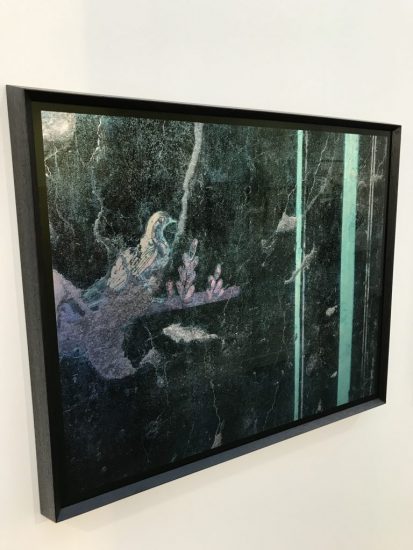 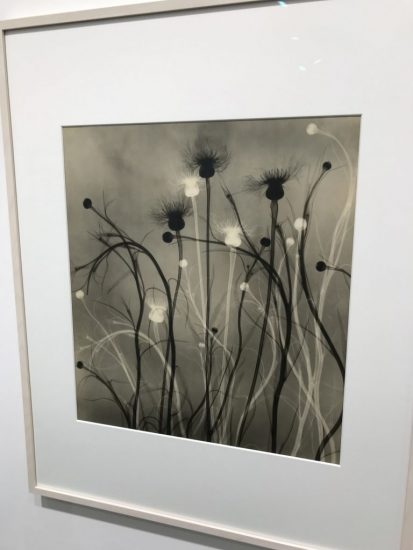 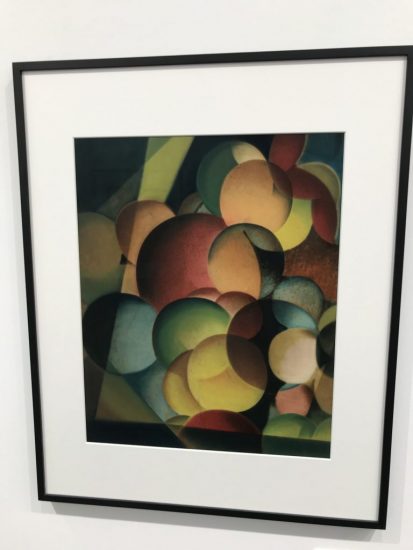 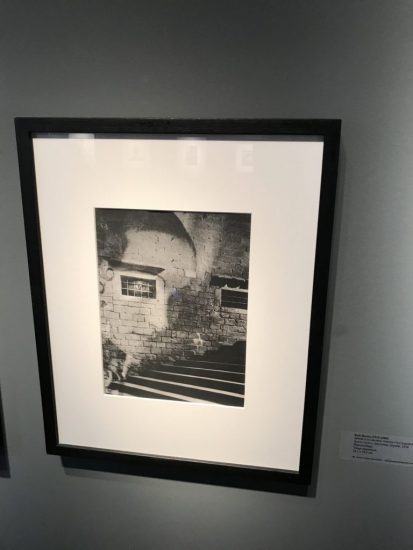 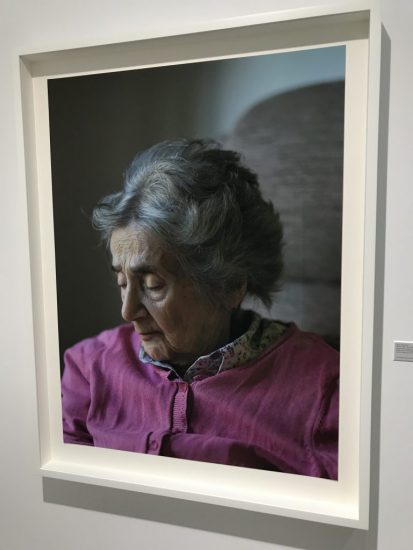 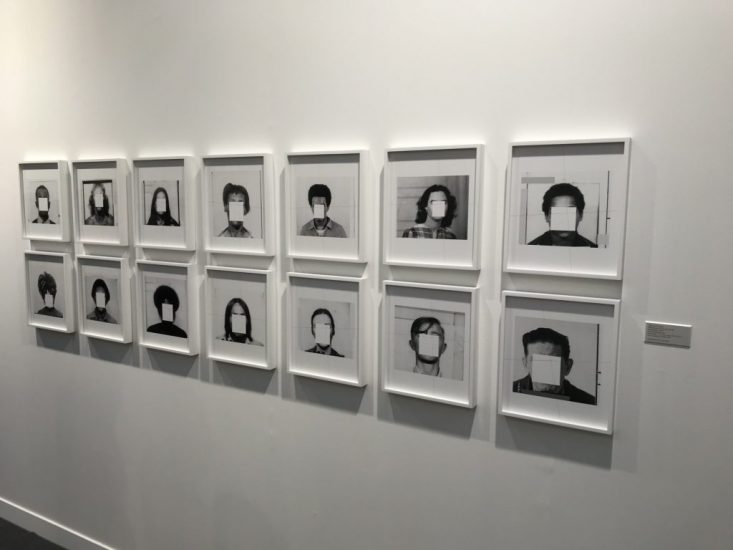 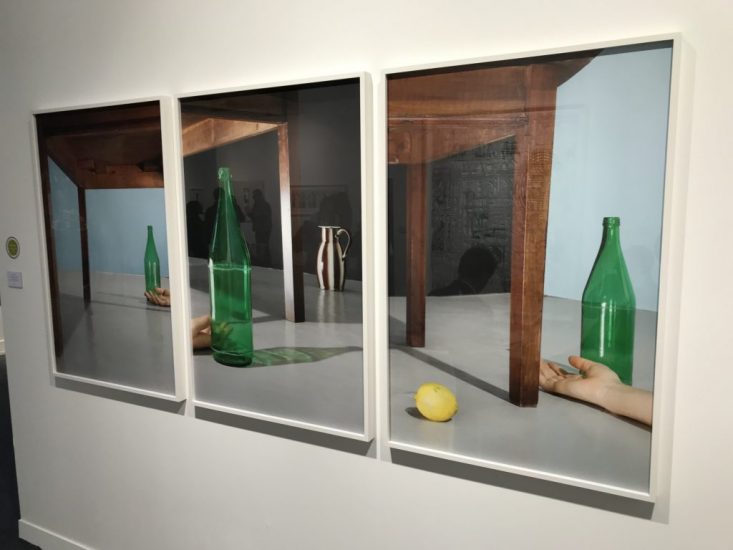 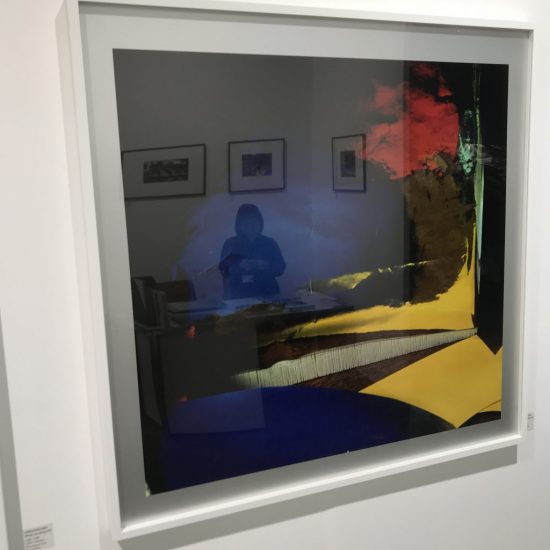 Galerie Binome (here): This small work by Mustapha Azeroul uses layers of gum bichromate to build up the geometric abstraction. The graininess of the process gives the shapes a sense of shadowy impermanence. Priced at €2000.

Galerie Binome (here): A pair of scanners facing each other and a sheet of glass with gestural paint marks on both sides provide the framework for this photographic diptych. The two images represent what each scanner saw, the “front” and “back” sides of the glass as seen from each side, including the shadows. The work is both lightly expressive and a smart investigation of perception. Priced at €7000.

Yumiko Chiba Associates (here): This 1960s vintage print by Shin Yanigasawa uses the train tracks as a visual anchor. Above the horizontal darkness, a quaint set piece unfolds, involving a trio of firemen and a squirt of water. Priced at $4000.

Casemore Kirkeby (here): This booth was a solo presentation of vintage works and ephemera from Jim Goldberg’s Raised By Wolves project. Documenting teenage runaways in San Francisco and Los Angeles in the late 1980s and early 1990s, the photographs deliver a sense of tender rawness, particularly when paired with hand-scrawled inscriptions. This large scale print puts the dark, dingy, graffiti-covered room, the shininess of the bracelet, and the haziness of the girl’s gaze into poignant contrast. Priced at €36000.

Toluca Fine Art (here): This grid of works by Pablo López Luz documents the the use of local volcanic rock in Mexican architecture, capturing the repetitions of brickwork and wall patterning, as well as larger outcroppings and specimen rocks that have been incorporated into designs. The black and white images are often built on contrasts of light and dark, highlighting the roughness of the textures. Priced at €3200 each.

Christophe Guye Galerie (here): Rinko Kawauchi turns an ordinary urban scene into an expressively squiggled abstraction of horizontal light in this 2005 image. The striping feels like ephemeral magic hiding in the everyday. Priced at €8800.

Christophe Guye Galerie (here): Like John Baldessari’s thrown red balls from the 1970s, Jun Ahn’s thrown apples have an energetic sense of conceptual playfulness. The apples float through the bisected composition with perplexing weightlessness, like a constellation of stars in the night sky. Priced at €7000.

Galerie Lumière des Roses (here): Maurice Tabard’s 1929 image of the ceiling of a theater in Pigalle is wonderfully disorienting. The lit layers scallop outward, like the petals of a geometrically-hard edged flower or a seashell. Price on request.

Galerie Thomas Zander (here): This group of 18 images by Albert Renger-Patzsch spans almost two decades (1936-1955) of fascination with the same building structure. Its blocky industrial geometries were a perfect match for the German photographer’s sense of order and proportion, the crisp black and white images circling around, seeing alternate angles and perspectives. Being sold as a set for €180000.

Galerie Thomas Zander (here): The German photographer Tata Ronkholz is best known for her frontal views of trinkhallen, so these images of industrial gates were a discovery for me. The rigor of the compositions centers our attention on the variation in the rectangular forms, the typological effect making the whole more compelling than any one image on its own. Priced at €5800 each.

Vintage Galéria (here): This mid-1970s work from the Hungarian artist Péter Türk seems to fit right into the larger flow of photoconceptualism of the 1960s and 1970s. The thrown rock is seen in different guises and locations, and in rephotographed prints that confuse our sense of presence and timing. Its deceptively simple and smartly complex. Priced at €7500.

Galerie Gilles Peyroulet & Cie (here): This 1927 photograph by the French film director Jean Dréville is a study in motion. Three layers of imagery make up the montage, with the scale and tilt different at each stage. Priced at €25000.

Galería Juana de Aizpuru (here): The gallery staff had this new Cristina de Middel image back in storage, but it was worth pulling out for a closer look. It comes from her new series Funmilayo, where she inverts the story of the women’s rights crusader (and mother of musician Fela Kuti) who was thrown from an upstairs window by an “unknown soldier”. De Middel’s image powerfully reverses the situation, having a woman watch as a soldier tumbles through the flat pastel orange sky. Priced at €9000.

Gagosian Gallery (here)/ Galerie 1900-2000 (here): This booth was an oversized solo presentation of the photography of Man Ray. This solarized 1944 print of a tangled twist of rope was a highlight, the unraveling fibers made prominent by the enhanced egding of the process. Priced at $145000.

MAGNIN-A (here): One aspect of the career of the famed Malian photographer Seydou Keïta that was previously unknown to me was that his vintage prints were often overpainted by his framer, at the request of the sitters. Here the jewelry of the two women is painted gold, adding one more layer of regal air to an already luxurious dual portrait. Priced at €13000.

Galerie Nikolaus Ruzicska (here): This new work from the German photographer Axel Hütte continues his exploration of imagery placed within sandwiched glass and stainless steel. Here, birds and fish from the murals at Ephesos are printed in negative tonalities, allowing silvery tones to shimmer through the light areas. The effect is akin to a glow-in-the-dark shine, giving this bird and the decorative stripes nearby an uncanny richness. Priced at €20500.

MEM (here): This innovative 1930s image by Kyoto-based photographer Yūshi Kobayashi mixes positive and negative silhouettes of cornflowers into one intermingled composition. All of the prints on view by Kobayashi are exhibition prints, so the dense cluster of curving stems is extra large. Priced at €20000.

MEM (here): Apparenty Noboru Ueki’s hand colored images from the 1940s were so poorly received by local Kyoto critics at the time he first showed them that he put them away in a box and didn’t look at them again for decades. But while hand painted color was no match for the new chemistries of color photography at that moment in time, the nuanced tones in this abstraction are certainly noteworthy now. The softly colored circles float and intermingle like delicate bubbles. Priced at €30000 and already sold.

Galerie Sophie Scheidecker (here): This Kati Horna photomontage places a woman’s eye right in the box of a barred window, near a rising set of stairs. It’s a surreally watchful vision, nestled in among the brickwork. Priced at €18000.

Pace/MacGill Gallery (here): Paul Graham’s large scale portraits of his aging mother are far, far better in person than any of the images online appear. The sensitive detail in the prints is altogether entrancing – the hair, the wrinkles, the weave of the sweater, even the fibers of the flowered shirt are all crisply visible here, making the tenderness and compassion with which the images have been taken all the more intimate and poignant. Priced at $25000.

Pace/MacGill Gallery (here): This multi-image grid by Trevor Paglen uses mug shots from the accused and dead as source material for training facial recognition software. Vector lines attempt to measure the faces, which have been blanked out by white rectangles, taking us back to the failed idea that criminality is somehow correlated with facial features and forward to today’s AI systems that may try to reach similar conclusions. Priced at $25000.

Galerie Kuckei + Kuckei (here): This new work by Barbara Probst continues her career-long exploration of simultaneity and multiple perspectives. It shows three views of the same scene, the vantage point of the hand and bottle reoriented each time. Here the setup becomes more painterly than ever, with the inclusion of a striped vase and lemon that recall the tropes of the still life genre. Priced at $26000.

The Third Gallery Aya (here): While this booth photo of Osaka-based photographer Eiko Yamazawa’s 1986 color abstraction is poor, this work shows that her use of colored sheets and reflective paper were remarkably innovative. Largely overlooked at the time they were made, the mottled nuances of large scale vintage prints like this one are now being rediscovered. Priced at €28000

Part 3 of this report can be found here, with Parts 4 and 5 here and here.