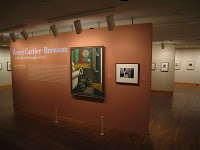 JTF (just the facts): A total of 42 photographs, 5 paintings, and 9 etchings/drawings, displayed in a single gallery on the lower level of the museum. In addition to the 14 images by Cartier-Bresson, photographs by Atget (1 image), Brassai (7 images), Kertesz (16 images), Bing (3 images), and Seuphor (1 image) are shown. The other artworks in the exhibit are by Lhote (Cartier-Bresson’s painting teacher), de Chirico, Mondrian, Dali, Picasso, and Matisse. All of the pieces in the exhibit are from the late 1920s and 1930s. (Installation shot at right.)

Comments/Context: During the holidays, we visited family in Chicago and were able to sneak off one morning for a quick visit to the Art Institute to see the two photo shows on view. So while Chicago is not our usual territory, we’ll cover both exhibits in today’s posts.

We’re all familiar with Cartier-Bresson’s “decisive moment”, where the contents in his frame would resolve themselves into an amazing composition for only a fleeting instant, which he would capture with his camera. Many people have commented that Cartier-Bresson’s genius was not so much capturing this decisive moment, but in fact being ready, with his camera pointed in the right direction and pre-focused, before the decisive moment happened. This exhibition (in honor of the centennial of his birth) takes that concept a step further, where we see a complex mix of artistic and cultural influences that were boiling around in Cartier-Bresson’s mind and that helped to shape his photographic vision.

The exhibit is organized thematically by subject matter, where carefully selected groups of related images are juxtaposed. On one wall, Kertesz nude distortions and Brassai etched nudes are paired with Picasso and Matisse nude etchings. On another, a classic Mondrian painting is flanked by two Bing geometric Eiffel Tower images and a handful of more abstract Kertesz images. There is a trio of sea scenes (Bing, Cartier-Bresson, and Lhote), as well as groups of bicycles, faces, portraits, and intertwined bodies. All are meticulously selected and hung to show their similarities.

The major takeaway for us was the idea that Cartier-Bresson, indeed all the artists of that place and time, seemed to be liberally exchanging compositional ideas. The echoes and parallels that are seen in these pairings are too exact to be random; they had to be seeing each other’s work, thinking and talking about it, and internalizing it to such a point that the ideas were then reformed and reused. It says that the worlds of painting and photography in Paris were intertwined communities, learning from and referencing each other. Disparate ideas from surrealism, abstraction, modernism, and humanism were all borrowed and merged into Cartier-Bresson’s approach. In many ways, this exhibit seems less about Carteir–Bresson in specific (there are actually more Kertesz images in this show than Cartier-Bressons), but more about the overall artistic melting pot of the period.

As an aside, since Cartier-Bresson gave up photography in his later life and returned to drawing and painting, it would be interesting in a future exhibit to see a few of these later works juxtaposed with the images from this period to see how his vision continued to evolve.

Collector’s POV: Cartier-Bresson’s work is ubiquitous at auction, with later prints available in nearly every sale. Vintage prints from 1920s and 1930s Paris (like those in this exhibit) are much harder to come by and range from perhaps $50000 to well into six figures for more iconic pictures, assuming you could find them. Ironically, the prints from this exhibit (and this period in general one might suppose) aren’t particularly strong in terms of craftsmanship. Overall, while we don’t have any Cartier-Bresson images in our collection at the moment, we certainly came away from this show with an increased appreciation for his early work.

There were also several splendid early Kertesz images of Paris in this exhibit that we had not seen before; additionally, there was a Bing image that we have in our collection up on the wall (here). In general, this Paris period is full of tremendous photography by a variety of artists.

As background, the Cartier-Bresson Foundation site can be found here.