JTF (just the facts): A total of 16 color prints, framed in brown wood without mats, and hung in the main gallery space. All of the prints are chromogenic prints, made in editions of 10; the images are printed in one of three sizes: 12×12, 16×16, or a panoramic 16×32. The negatives were taken between 2007 and 2009, as part of one of four projects: Russia, Lewis Carroll’s Phantasmagoria, Pool of Tears, or Going My Own Way Home. A monograph of this work is available from Schirmer/Mosel (here). (Installation shots at right.) 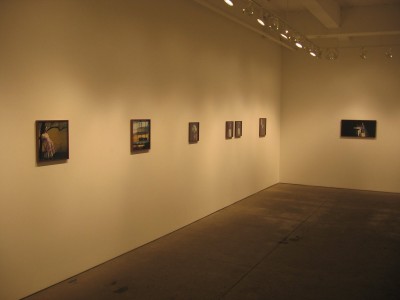 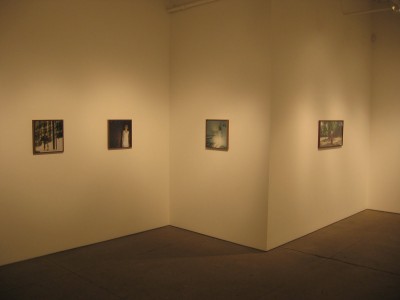 Comments/Context: Hellen van Meene’s intimate portraits of the awkward drama of adolescence take the conflicted emotions of her teenage subjects and infuse them with a quiet melancholy. She has staged her models in moody rooms of rich color, often using natural light from a nearby window, and dressed them in 19th century draped gowns of silk and lace. The resulting pictures feel like small angst-filled performances, or odd dress up games, where the girls adopt blank stares and mannequin-like poses that only partially conceal their inner lives.

The best of the works in this show are the smallest prints; the scale forces the viewer to enter the staged environment and pay attention to what is occurring. And even though the mood is consistently shadowy and mournful, it is those hidden vulnerable moments that come out when the girls are lost in thought that transform a handful of these unconventional set-ups into something altogether more intriguing.

Van Meene’s panoramic portraits are shot at generally the same scale as their smaller cousins, thereby providing much more setting and narrative environment for the subjects than the close-ups. The challenge is that she is primarily telling subtle inner stories, where the emotional landscape is more important than the physical one. The result is that the larger backgrounds of the panoramas seem a little too staged or more expansive than necessary given the nuanced personalities being captured.

In general, I liked the European style work much better than the images taken in America; the lyrical fairy tale settings of abandoned rooms in deep blue matched the subjects and their private emotions better; others felt like ghost story illustrations where our plucky heroine is wondering what to do next. In America, the models and their surroundings were more brash and confrontational; these teenagers weren’t playing along quite as demurely. And while these images are revealing in their own way, Van Meene’s magical spell is a bit broken by this directness; the images are less successful at transporting the viewer somewhere unexpected.

All in, this is a well crafted, quiet show that rewards careful looking, where a few of the portraits strike just the right pitch in exposing the real drama of growing up.

JTF (just the facts): Published in 2019 by Jiazazhi Press (here). Hardcover, 208 pages, with 95 color reproductions. Includes an essay by the artist (in Chinese/English). In an edition of ... Read on.