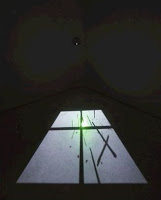 JTF (just the facts): A large group show of photography, video and film, displayed in the entry space, on five levels of the darkened rotunda, and in two annex galleries off to the side. The exhibit includes work by 58 artists and photographers, spanning the period from roughly the 1960s to the present. The show was curated by Jennifer Blessing and Nat Trotman, and a hardback exhibition catalogue is available for $45 (here). No photography is ever allowed at the Guggenheim, so unfortunately, there are no installation shots for this show. Specific images have been taken from the Haunted exhibit website (linked from here). (Paul Chan, 6th Light, 2007, at right.)

The exhibit is divided into four loose thematic groups, following a generally chronological order. This is not however a rigid organizational structure; works listed under various themes are often intermixed and taken out of strict order, likely due to the vagaries of display constraints. Each of the sections is listed below, with the artists and photographers included and the number of works on view in parentheses: 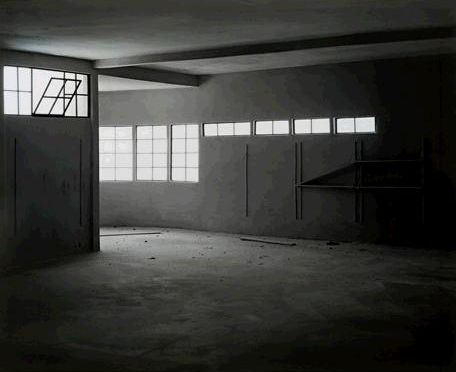 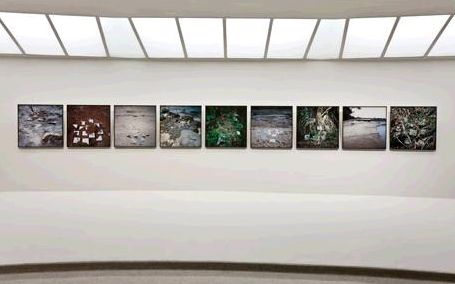 Comments/Context: The Guggenheim’s current exhibition of contemporary photography, video and film (which has been on display since early Spring) is best characterized as an expansive gathering of the museum’s recent acquisitions in these related media, tied up under a broad, inclusive conceptual umbrella which can happily accommodate nearly anything pulled out of storage. As a theoretical construct, Haunted offers plenty of leeway to cover everything from appropriation and reuse to history and nostalgia, and from staging and myth making to memory and documentation, covering most of the usual bases in the contemporary photography debate. (Robert Smithson, Yucatan Mirror Displacements (1-9), 1969, at right.)
The story begins with Warhol and Rauschenberg (as background) and quickly segues to the Pictures Generation, with iconic but routine stops at Becher water towers, Prince cowboys, Charlesworth newspapers and Levine reproductions, and a few more modern day descendants (VanDerBeek, Jacob). Paul Chan’s quietly disturbing falling silhouettes are out of place amongst these works (and annoyingly interrupted by people continually wandering through the projection); this is the first work on view that really woke me up and got my attention. 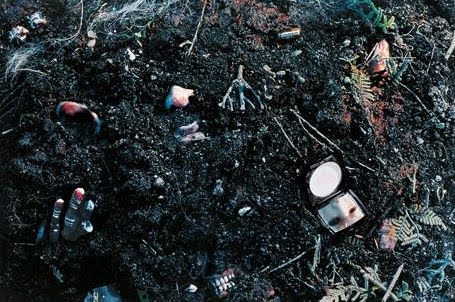 The next level of the rotunda moves on to time as thematic element, with shadowy Sally Mann landscapes, An-My Lê Vietnam reenactments, Sugimoto seascapes, and a sparse black and white Casebere garage. I particularly enjoyed seeing Roni Horn’s grid of women’s changing rooms (somehow not included on the exhibit website), with its repetitions and layers of subway tile, numbered doors, mirrors, and peep holes. Continuing up the ramp, the works become more performance and installation oriented, filled with documents and relics. There are installations by Boltanski and Messager, and performance stills from Zhang Huan, Gina Pane and Ana Medieta. Robert Smithson’s late 1960s images of arrays of mirrors placed on beaches, in jungles, and amid gravel were a discovery for me, and the Cindy Sherman of crime scene dirt, complete with teeth, hair, and random fingers and body parts was lovingly creepy. (Cindy Sherman, Untitled (#167), 1986, at right.)
The last thematic group is centered on memory and traumatic experiences, but is in many ways, more of a grab bag. Anthony Goicolea’s video Nail Biter is a manic, disturbing, shock treatment, covered in drool and fingernail fragments. I always enjoy Christian Marclay’s unspooled cassette tape cyanotpes, and there are three of these on view in a side gallery, paired with a Thomas Demand video; a group of Jeff Wall images and a Stan Douglas video inhabit the other annex area. The most memorable work in the entire show is Tacita Dean’s six screen film of Merce Cunningham performing Stillness to John Cage’s 4’33”, displayed on the entire top level of the rotunda. While the space does not lend itself well to the different vantage points of the film (and again, the crowds walk repeatedly walk through the projections), it is a triumph of subtlety and thought: Cunningham sits in a chair, from time to time shifting his arms, all in the noisy silence of his studio.
.
While the one-size-fits-all flexibility of the exhibit’s curatorial approach allows for the incorporation of a wide assortment of working styles and artistic methods, it unfortunately leads to a show that suffers from being much too amorphous and unwieldy. Contemporary photography is of course a jumbled, chaotic melting pot of recursive and recombinant ideas, so charting a course through all the diversity is no easy task. But making sense of it all is why we come to museums; we seek to be educated, to be shown a path through the thicket, to be given a coherent point of view, especially in a survey show like this one. Instead, this exhibit feels like the list of accessions divided up into major conceptual buckets (a good start), but without the more important, driving sense of what the curators really think durably matters. I also felt like many of the specific selections weren’t hugely inspiring; I saw far too many ho-hums or lesser examples in a row to generate much positive momentum or energy.
In my view, the Guggenheim has the exciting challenge of trying to create a distinct museum identity in a New York environment with many strong and capable rivals. But this show leaves me with the conclusion that at least in the realm of contemporary photography, the Guggenheim does not yet seem anxious to step into a leadership role, or is perhaps content to be more of a follower. Yes, there are many terrific works on display here, some well known and others a bit more adventurous. But I didn’t discern a consistency of conception among these accessions that tells me someone is guiding the ship with a firm and deliberate hand or that risk taking and innovative thinking are a top priority. If the Guggenheim wants a reputation as a thought leader and taste maker in photography, we will need to see a more comprehensive and well-executed vision. Until then, this show is evidence that the museum is indeed very much active in contemporary photography, albeit without an easily readable point of view.
Collector’s POV: I’ve already highlighted many of my favorites from this show in the comments above. None is a perfect fit for our specific collection; the Becher water towers would be the likely closest actual match.
Rating: * (one star) GOOD (rating system described here)
Transit Hub:
Haunted: Contemporary Photography/Video/Performance
Through September 6th