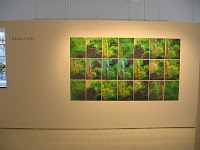 JTF (just the facts): A total of 13 works are hung in the main gallery space. 8 of the images are chromogenic prints, framed in white and not matted, each 16×12, printed in editions of 3, and made in 2010. There is a single large grid of 21 chromogenic prints, each image pinned to the wall under glass but not framed; the individual prints are roughly 20×15, each made in 2010, and the entire grid is printed in an edition of 3 (2 of the 3 will stay as a set of 21, while 1 will be broken up and sold as individual prints). There is also one large chromogenic print, 74×49, framed in white but not matted, printed in an edition of 3, and made in 2010. The final three works come from the period 1983-1985. These are black and white gelatin silver photograms, each unique. Two are sized 16×12, and one is much larger, at 74×49; all three are framed in white with no mat.(Installation shots at right.)

Comments/Context: Earlier today, I posted a basic, some might say rudimentary, framework for categorizing the different modes of photographic abstraction being employed by today’s contemporary artists (here). And while it may be imperfect, this intellectual scaffolding certainly makes thinking about a show like Hanno Otten’s much simpler. 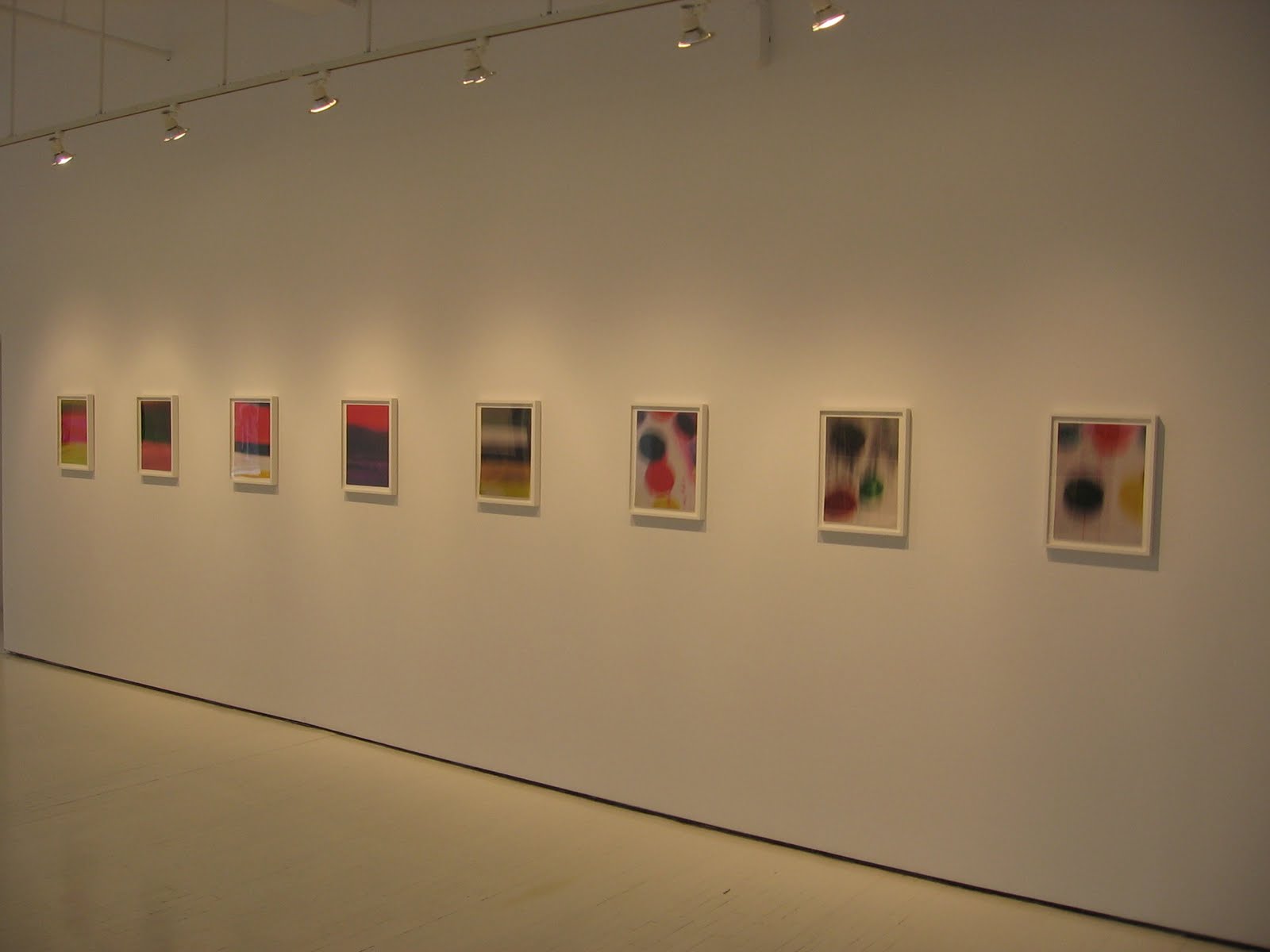 Otten is not first and foremost a photographer in the limiting sense of the word; his artistic career has also spanned sculpture, painting, watercolor, video, and drawing, and in each of these forms, he has systematically explored the boundaries of how we experience color. As such, his “subject matter” isn’t anything in particular – it is complex color theory (placing him squarely in the third box in the abstraction framework diagram), and photography is just one medium for testing its limits.
All of the recent works in this exhibit are fragmented photographs of Otten’s own abstract paintings. They chop large canvases into smaller shards, where stripes and circles of color, drips of paint, and layers of brushstrokes are synthesized into indistinct, approximate blurs. While there are echoes of Mark Rothko in some, Morris Louis in others, and even Claude Monet in the organic, green grid, the experience of color is altogether unstable; the fuzzy edges and fluid intersections are in flux, as though the viewer was squinting at the images from afar. The earlier works in the show, aptly titled Real Nothings, are black and white photograms that surely belong in the process-centric box in our abstraction framework. These pared down images (often a white rectangle on a black background) require up-close attention to see the small nuances of tonal change associated with the chance drips and swirls of darkroom chemicals. By far the most striking and memorable work in the show is the 21 image grid, Im Park 1, an exuberant explosion of shimmering, layered green, with hints of blue, pink, and yellow added in different proportions. There is a little Albers theme and variation going on here, as each panel becomes a riff on other adjacent panels, and nuances of color chase each other across the array.
While not every image in this show is a standout, I enjoyed being forced to consider the properties of photographic color from a new vantage point, where the color isn’t expertly sharp by design, but where it wobbles and vacillates with airy elusiveness. 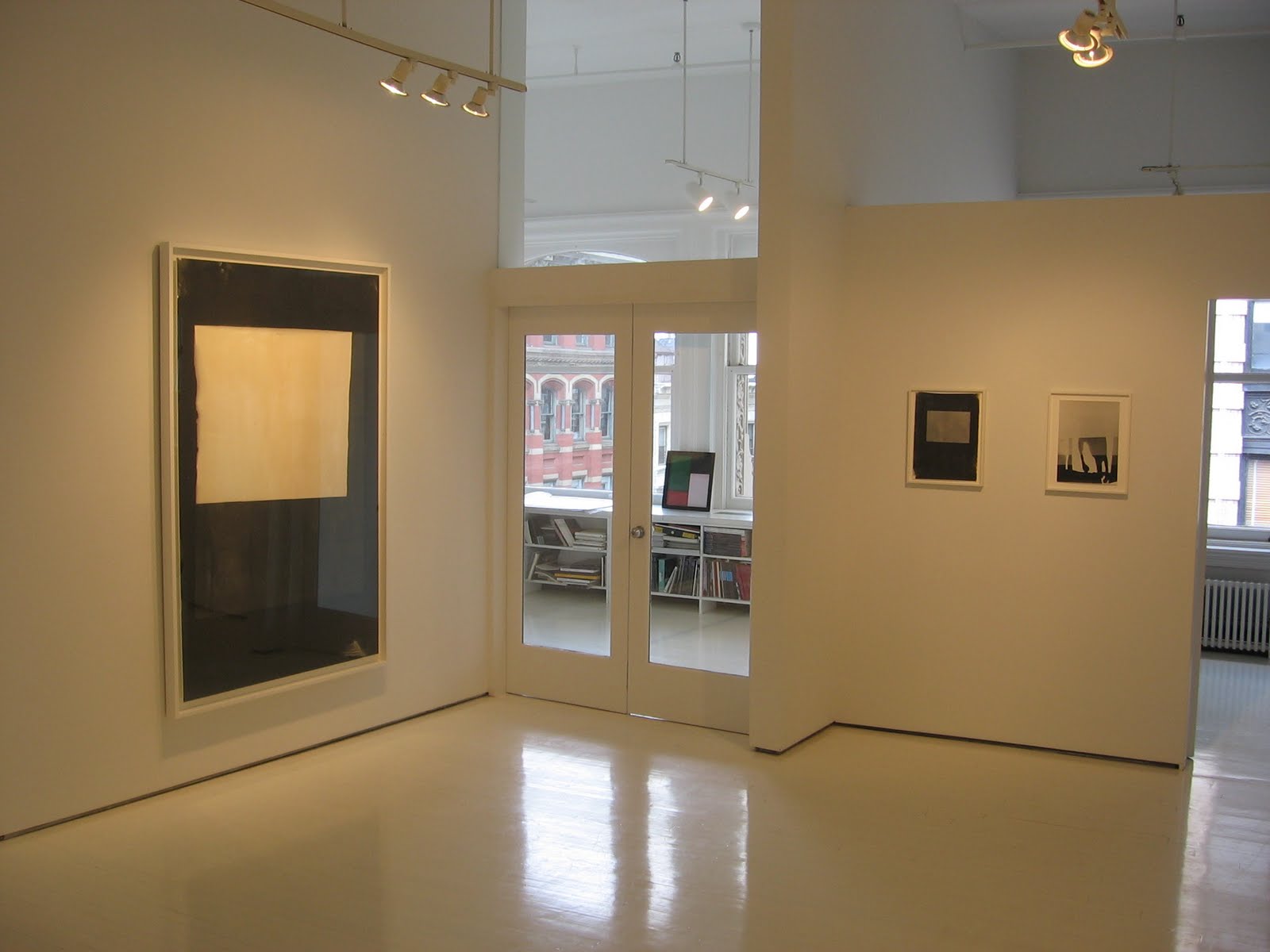 Collector’s POV: The prices for the works in this show are as follows. The large grid of 21 images is available for $16000 as a set, or $2500 apiece for individual prints from the group. The large chromogenic print is also $16000; the smaller ones are $2500 each. The older images from the 1980s are $24000 for the large photogram and $5000 each for the smaller ones. While Otten has been a successful artist for many years now, his works have very little history in the secondary market for photography; it is difficult to discern any pricing pattern with much certainty. As such, gallery retail is likely the only option for interested collectors at this point.
Rating: * (one star) GOOD (rating system described here)
Transit Hub:
Hanno Otten
Through June 26th
Janet Borden, Inc.
560 Broadway
New York, NY 10012
Twitter| Facebook|