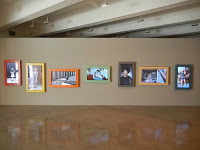 Comments/Context: Gillian Wearing’s new show (her first in New York since 2003) contains a handful of photographs that play a supporting role to three richer and more psychologically searing videos. All of the works on display explore a related emotional landscape: the complex intersection of individual identity, private stories, and public personas/roles. The result is an often disturbing and unsettling experience, where Wearing confronts hidden narratives and agonizing misunderstanding with remarkable nuance. Secrets and Lies and Bully are two of the most intense video pieces I have seen in quite a long time, so much so that they become difficult to watch as they progress. Secrets and Lies is staged in a small confession box-like room, where individuals in three quarter poses tell their private stories from behind creepy featureless rubber masks. Their disguises give them the freedom to tell their stories of murder, abuse, and other sad and painful traumas; standing in the claustrophobic chamber hearing these sordid tales was just too much and I literally had to move back a bit. Bully is equally powerful and arresting. It restages a tormenting bullying incident with a group of actors; I won’t give away its twist, but when the tables turn, the outcome is both harsh and poignant.

Snapshot gathers together seven videos and runs them simultaneously along one wall, framed in brightly colored wood frames like photographic portraits. This piece examines the nature of static portraiture, in that the images of the women at various stages of life move a little, just enough to add contour and contrast. When seen together, each moving image is an echo of a specific type of photographic style, matched with a related women’s role: the youngest girl plays a violin, the awkward teen stands stock still Sander-like, a young woman lies fetchingly on a chaise in a swimsuit, a young mother tends her baby, a middle aged woman poses for a studio portrait, an older, tired woman nervously eats chips in a car, and an elderly woman sits in an armchair in a dated flowered dress. The piece successfully tackles group memories, families, and women’s identities, spanning the history of black and white and color imagery.

I found the photographs in the show to be less striking and original. Three of the works are portraits of Wearing echoing famous images of Warhol, Mapplethorpe and Arbus. While the masking and staging are entirely successful (apart from the large eyes peering out from inside the bodies), the reverent inversion and identity mixing wasn’t as resonant for me; I understand the connection being made to artistic heroes and influences, but the visual idea seemed a bit too obvious. The single image of a bursting bouquet of artificial flowers is also well executed, but this “the flowers are fake” theme has been explored before (Vik Muniz in the 1990s as one example).

So while I didn’t find the photography in this show to be its strongest element, the three jarring and sophisticated videos are certainly worth a detour, even if video art lies beyond your normal area of interest.
. Collector’s POV: While it seems to happen more and more infrequently these days, once in a while, I still run into the buzz saw of conscious gallery misdirection when trying to gather prices for these reviews. In the past, I have had nothing but helpful, direct interactions with the staff at this gallery, but on this particular visit, I got a comical parody of a gallery run-around. Rather than exhaustively detail my five different inquiries to three different staff members and the subsequent exasperating sales pitches, let it suffice to say that the only actual price I ever received was $30000 for the 64×45 floral photograph; I was unable to get prices for any of the other works on view. I hope my fellow collectors who really want to follow up on Wearing’s work will have better luck extracting useful, actionable information than I did.

Wearing’s photographs have been only intermittently available in the auction markets in recent years, with only a handful of lots on offer; prices have ranged between roughly $10000 and $50000. As such, gallery retail is likely the best option for interested collectors at this point, assuming you can get someone to tell you the prices.