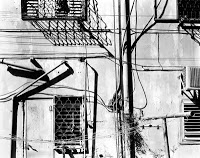 Comments/Context: Since there are plenty of sites and blogs that do an excellent job of exposing the work of new and emerging photographers, we typically don’t consider weighing in on unrepresented photographers as part of our mandate here; in general, most collectors aren’t focused on artists without a gallery to stand behind them. But to every rule, there must be an exception, and I was recently introduced to this series from Gabriel Benaim, and I found it compelling enough to consider for our own collection.
Benaim’s images of Tel Aviv, Israel, make dense patterns of the lines and forms discovered throughout the city. Urban geometries and abstractions are created from railroads and highways, beachfronts and sidewalks, scaffolding and telephone poles; his compositions are careful and layered. Often Benaim looks down from an elevated perch, taking in the sinuous curves of a parking garage or a roundabout or using the view from a rooftop to flatten out the picture plane.
. This work has plenty of precedents in the history of photography: there are strong echoes of Callahan, Friedlander, and the New Topographics photographers. (Ha Yarkon Park, 2008, at right.) But rather than seeing these works as derivative knock-offs of decades old masters, I saw this series as an exercise in drawing on the lessons of the past and applying them in synthesized ways to new subject matter.
Tel Aviv is a modern urban sprawl, blasted by punishing sun, where the awareness of conflict and violence that engulfs all of Israel constantly simmers under the surface. In some sense, the land and its history provide a surprisingly different mindset for looking at these pictures: knowing these images are of Tel Aviv, the Modernist architecture and perfectly planned waterfront boardwalks seem more earnest, and the satellite dishes that pepper the city rooftops seem more vital as a crucial link to the outside world. There is an evident newness to Benaim’s view of the city, an aspirational optimism and defiant spirit that is somehow different and less overtly critical than the American photography tradition he is drawing on.
I’m looking forward to seeing where this series goes as Benaim continues the project. For those of you who think black and white city photography is “stuck in the 1970s”, I think these images strike a good balance between reflecting on the old and showing us the new.
Collector’s POV: At this point, Gabriel Benaim is an unrepresented photographer. He is selling the images from this series directly to collectors; prices range between $900 and $1500 depending on the place in the edition. Given that city and industrial abstractions are one of our three collecting genres, these images would fit quite well into our world: they relate effectively to other works we already have on the wall, but offer new perspectives that provide intriguing contrasts and comparisons.
Transit Hub:
Twitter| Facebook|