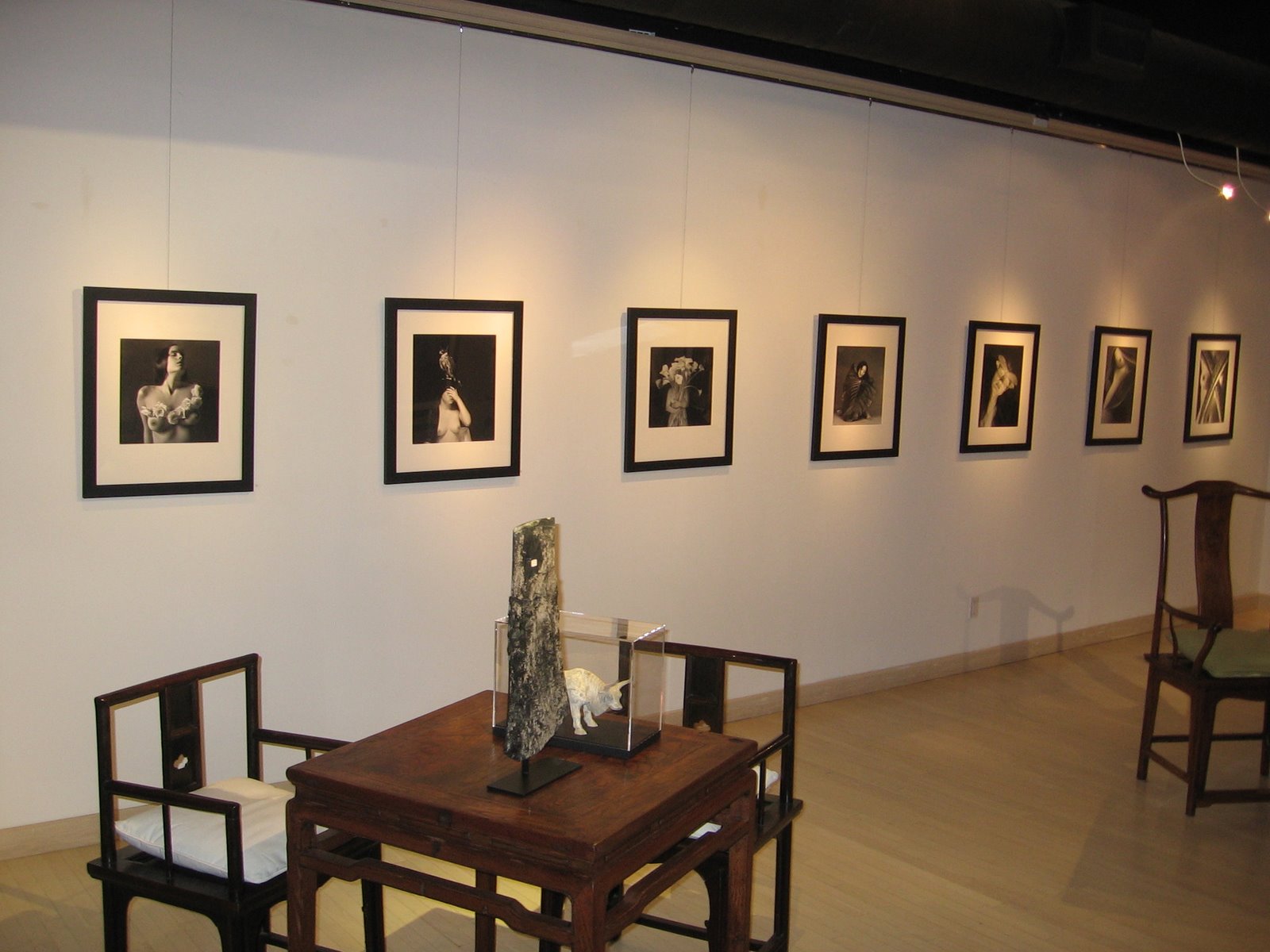 JTF (just the facts): A total of 26 black and white images, displayed in wide black frames, throughout the gallery. Most of the works are 20×16 inches, although there are a handful in a larger size (approximately 40×30 inches). Negatives range from the late 1980s to the present. (Installation shot at right.)

Comments/Context: Looking at the work of Mexican photographer Flor Garduño, you would never, ever, mistake her work for that made by a man. Indeed, Garduño’s images are among the most overtly “female” pictures we have seen.
Nearly all of Garduño’s pictures have a sensual female form/nude staged together with symbols from the natural world (fruit, leaves, flowers, feathers etc.). Her compositions have an earthy mythology to them, an almost dream-like or magical quality that seems drawn from the long history of Latin America. In her early days, Garduño was an assistant to Manuel Alvarez Bravo, and she seems to have absorbed the same love of the uniquely Mexican culture, as well as the ability to structure images with poetic simplicity. She is also a master printer; all of her works are printed with an astounding and meticulous attention to dark and light. This show mixes a few new pieces with a variety of other works from the past decade or two, so there is some ability to see how her approach and aesthetic has been refined over time.
Collector’s POV: For us, while Garduño’s work is always made with an original point of view and with thoughtful care, the results are often hit or miss. When it works, the images are stunning; when it doesn’t, the works feel a bit contrived and odd. The works in this show are priced between $2500 and $9000, dependent mostly on size it seems. We actually already own an excellent nude by Garduño (Los Limones, 1998, found here and also on display in this exhibit), which we bought a few years ago from Andrew Smith (gallery site here) when we were living on the West coast. In addition to prints found in the retail market, Garduño’s work has become more available at reasonable prices in the secondary market in the past few years.
Rating: * (one star) GOOD (rating system described here)
Flor Garduño, Mujeres Fantasticas
Through January 9th
Throckmorton Fine Art
145 East 57th Street
New York, NY 10022
Twitter| Facebook|