This is Part 4 of our summary report on Paris Photo 2017.

Part 1 of the report (here) explains the rationale behind the decision to feature only female photographers this year and includes an explanation of the format used in the detailed slideshow below. So while it is certainly possible to jump directly into any one of the individual reports, start back at the beginning if you want to understand the context. Part 2 can be found here, and Part 3 can be found here. 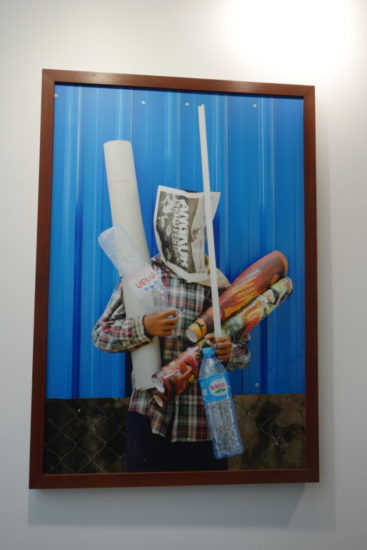 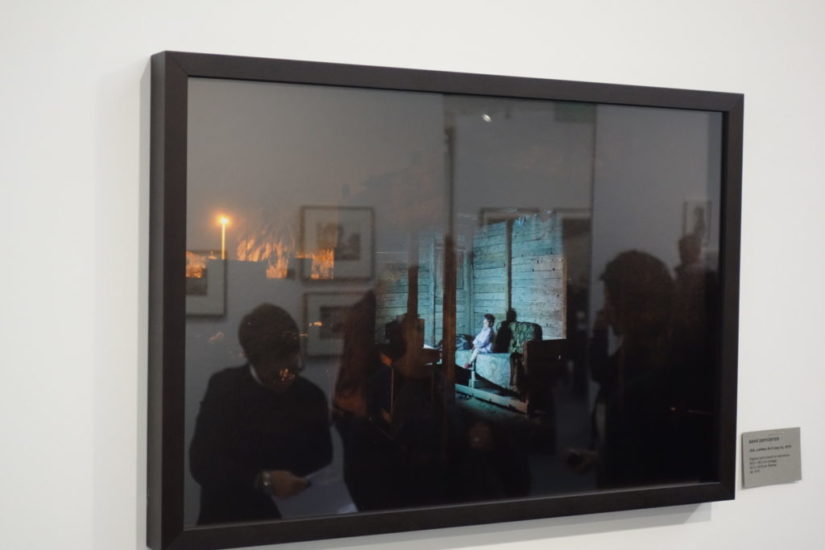 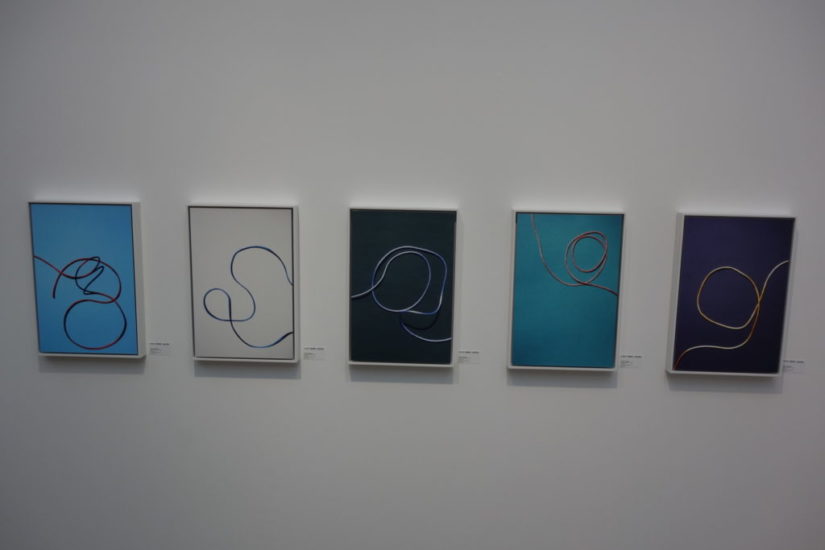 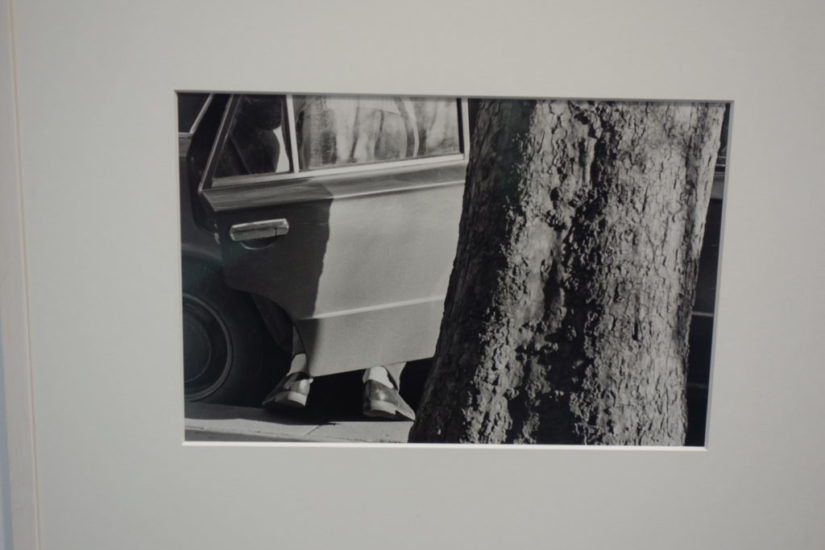 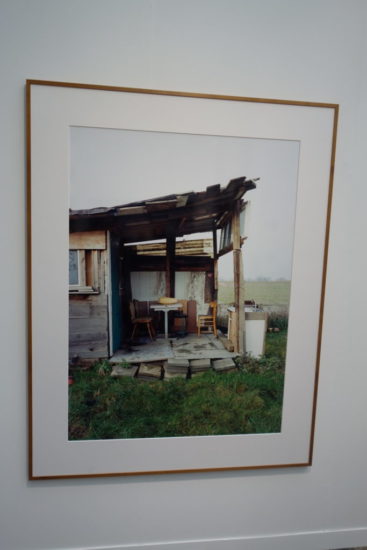 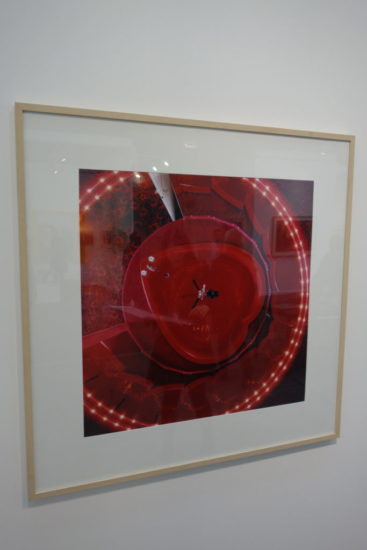 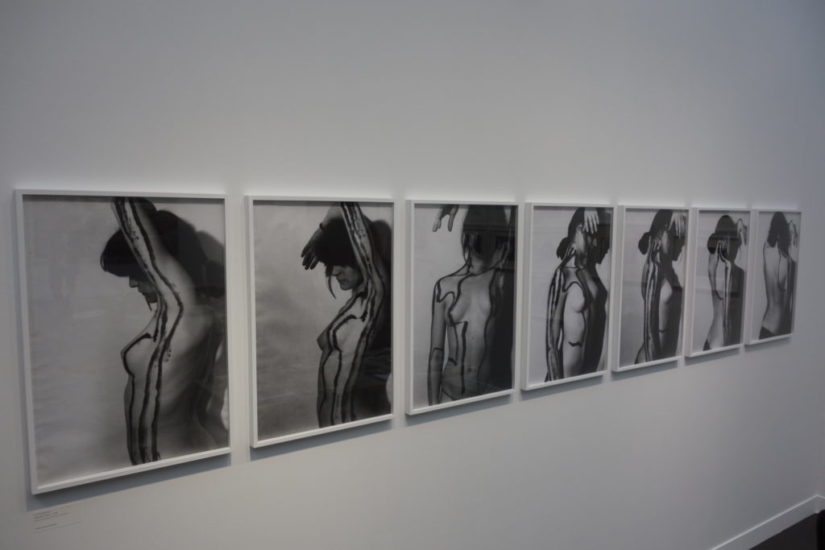 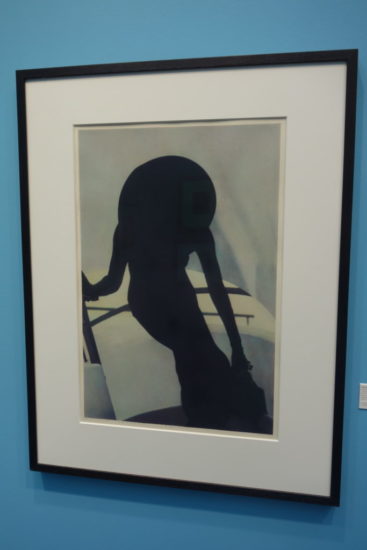 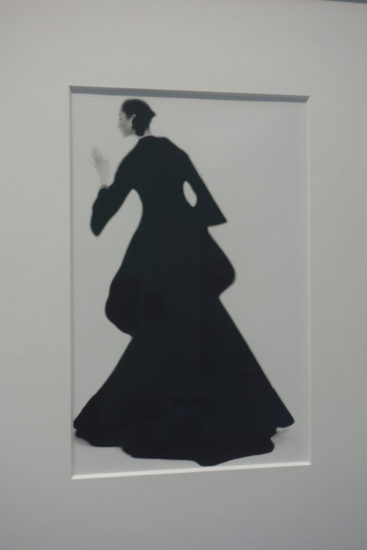 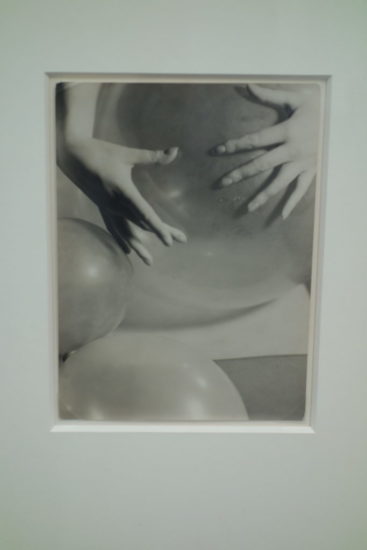 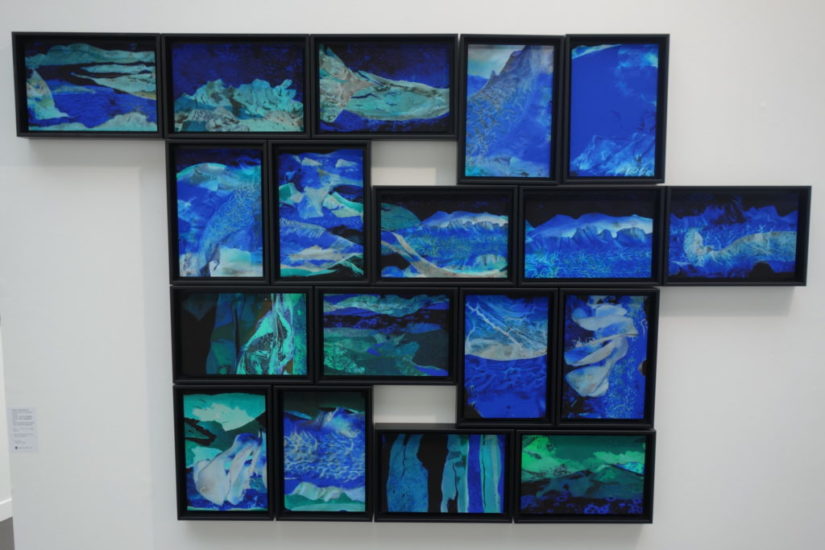 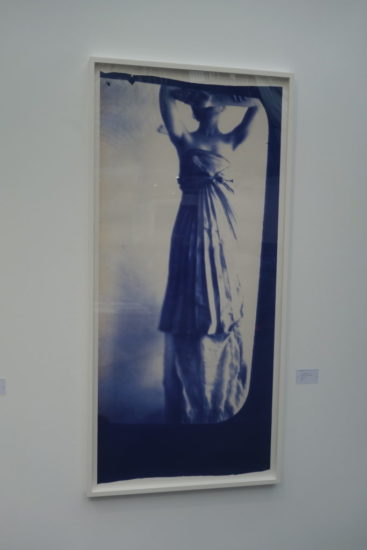 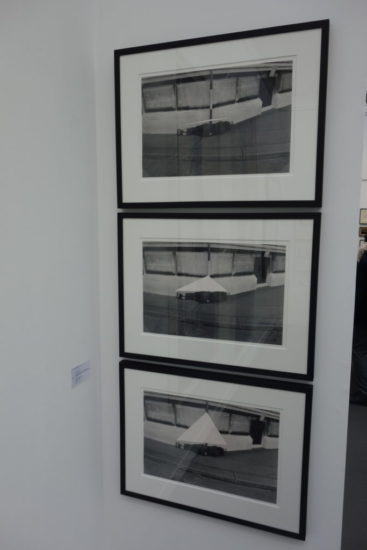 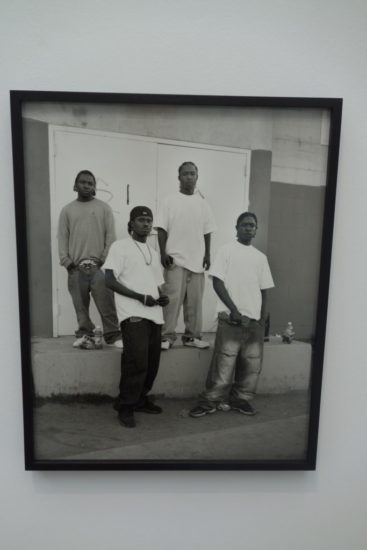 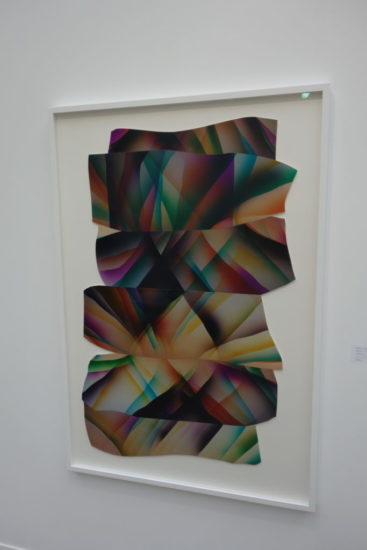 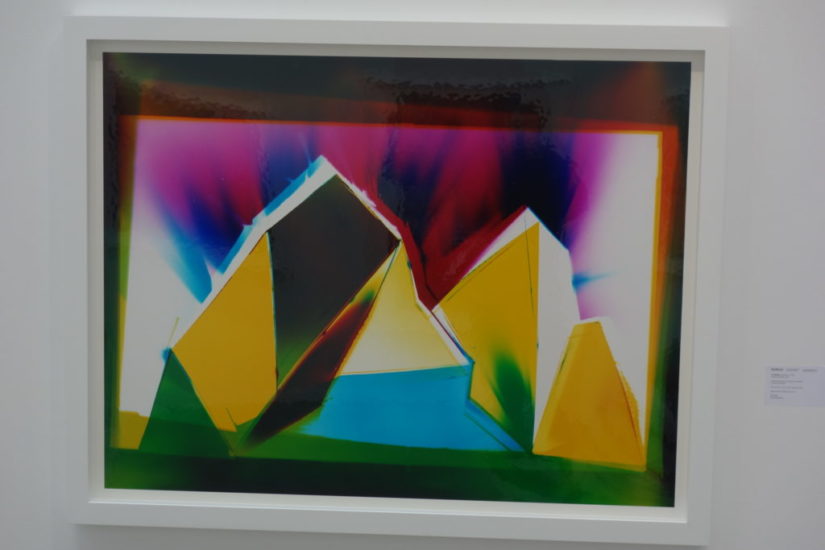 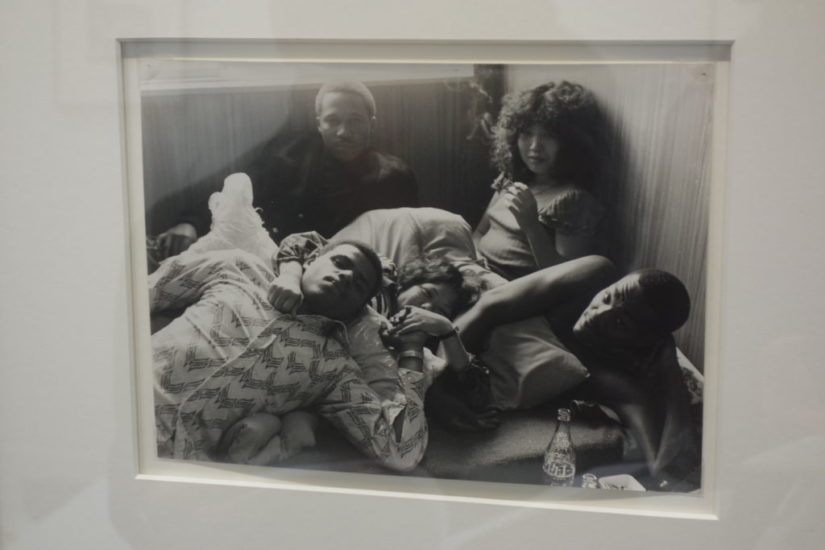 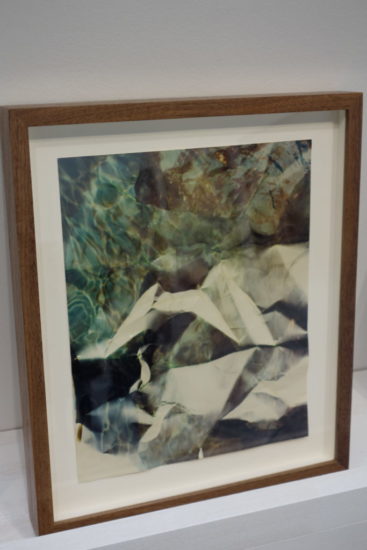 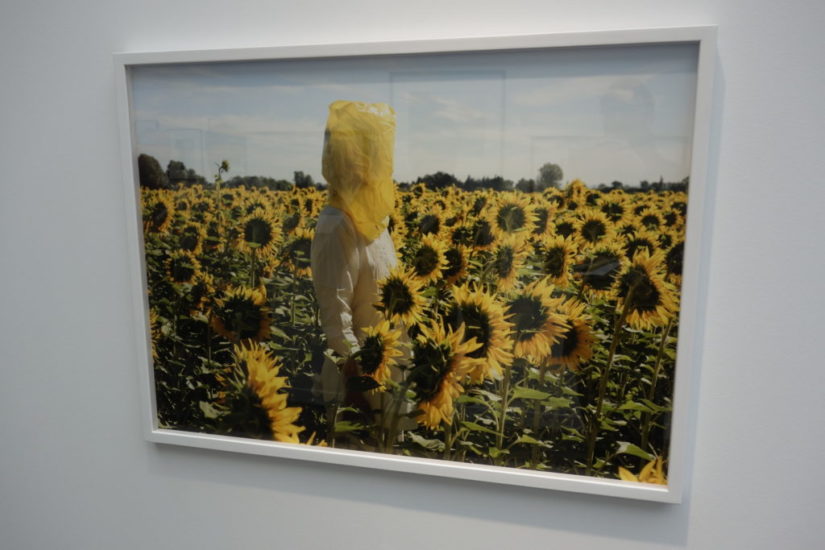 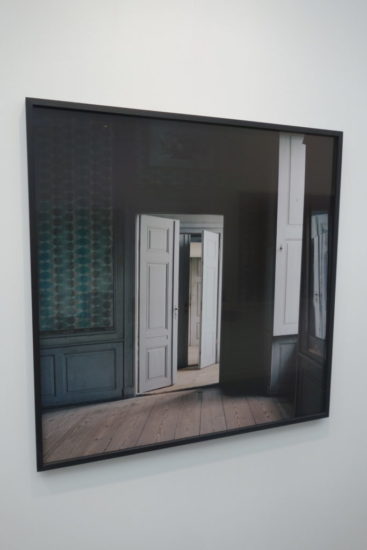 Les Douches la Galerie (here): The Cambodian photographer Sophal Neak’s large scale color portraits consistently interrupt her subject’s faces, obscuring their identities with everyday objects. This image comes from a recent series made in Phnom Penh, where the objects being held represent the worker’s occupation. In this particular case, I’m not sure what job combines empty water bottles and rolled up posters (perhaps a hanger of advertising or promoter of some kind?), but the underlying concept gets at deeper questions about how our jobs (and their accouterments) come to define us. Priced at €3500.

Magnum Gallery (here): Several of Magnum photographer Bieke Depoorter’s recent projects have explored the edges of night, and this 2015 image (badly seen due to reflective glass) taken in America follows this pattern. A young child is bathed in the bright glow coming from a television, with an open-sided wooden shack as shelter. The scene has a cinematic feeling, with the unspoken menace of night closing in. Priced at €3500.

Robert Morat Galerie (here): The twirling cords in these new works by Jessica Backhaus offer a surprising degree of formal and compositional sophistication. Her color pairings pop with brightness and the gestural movement of the strands of rope offers an almost infinite source of improvisational play. Priced at €2600 each.

Robert Morat Galerie (here): This 1975 image made in Budapest by Bertien van Manen is quietly impressive. The tree trunk balances the open car door in relative weight, while the opposing textures of rough and smooth give the juxtaposition its vitality. And then those strange shoes draw our attention, jutting out from underneath the edge of the door, pushing against the concrete for balance. The picture feels wholly mature and well considered, the framing turning a forgettable moment into a tautly constructed scene. Priced at €2500.

Galerie m Bocuhm (here): Simone Nieweg’s large scale color image gives this humbly constructed outdoor patio a visual treatment worthy of glorious architecture. While the structure itself has been scavenged from cast off materials (a door turned sideways provides the windows up high), the artist’s eye is careful and observant, seeing the honest, unpretentious can-do spirit in its bones. Priced at €15000.

Galerie m Bocuhm (here): Lucinda Devlin has spent much of her artistic career looking at built spaces, from execution chambers to over-the-top hotel rooms. This image captures the exuberant romantic excess of a light-encircled heart-shaped tub, as seen reflected in the mirror on the ceiling. Priced at €9500.

Vintage Galéria (here): Dora Maurer’s turning body-painted portrait (entitled Objectified Outline, from 1981) upends the usual contours of the female form. Black lines cross her body in unexpected ways, running from neck to armpit, across the shoulders and down long arms, drawing our eye along new pathways. Priced at €35000.

Peter Fetterman Gallery (here): Sheila Metzner’s fashion study from 1988 turns her model into a flattened black cutout, and the architecture behind her into an arcing linear abstraction. Her fresson process then douses the whole image in a grainy tactile softness, the glimmering shadows made up of tiny specks of color. Priced at €8870.

Peter Fetterman Gallery (here): When Lilian Bassman reworked her fashion images from the 1950s and 1960s, she pushed them further toward a painterly aesthetic exaggerated by bold contrast. This image of a model in a Charles James dress turns the silhouette into a simplified form, the essence of its graceful jagged line coming through more clearly. Priced at €6175.

Galerie Thessa Herold (here): Laure Albin-Guillot’s 1930 still life combination of hands and balloons keys in on of the subtle surface tonalities of the light across the round forms. Burnished flares dance across the surface, with the disembodied hands conducting the visual music. Priced at €3200.

Galerie Thessa Herold (here): At first glance, Valérie Winckler’s studies in electric green and blue look like negative landscapes of hills and valleys. But up close, that conclusion falls apart, the forms and patterns more likely something drawn from the sea. In the end, the undulating edges and overlapping washes create sinuous layers of textures that resist any definite identification. Priced at €1200 each.

Richard Saltoun Gallery (here): I have always thought that Francesca Woodman’s late diazotype caryatids were wonderfully romantic, but until I saw this work, I didn’t realize that a posthumous edition of prints had been made by the estate. That conclusion muted my enthusiasm for this extra large draped form just a bit, but there is no denying the delicacy of her vision. Priced at €34000.

Richard Saltoun Gallery (here): This 1972 series of three “configurations” by Valie Export combines the body of the artist lying on the sidewalk with variations of abstract triangular forms. From sliver thin to large and expansive, the white geometries seem to change the proportions of the street scene, as if each was imparting a different amount of weight on the prone body. Priced at €62000.

Grimm Gallery (here): This booth was a solo show of Dana Lixenberg’s excellent Imperial Courts project. While this portrait of four young men offers obvious repetitions of baggy pants, oversized shirts, and hairstyles, it is the commonality of hardened expressions and slung back stances that feels most honest and unadorned. Priced at €2500.

NextLevel Galerie (here): This multi-part photogram work by Chloe Sells layers together waves of dissipating color. Like Morris Louis’ poured paintings, Sells seems to have encouraged the color to fall in gentle lines, creating a rainbow of criss-crossed gradients. Priced at €9700.

NextLevel Galerie (here): Colored gel filters and the reversals of the color darkroom give this recent work by Liz Nielsen its intensity. Its glossy boldness seems to explode off the wall, into reverberations of geometric form and misty blasts of jarring color. Priced at €7000.

Nap Gallery (here): The genuine easy going tenderness of this 1970s Okinawa image by Mao Ishikawa fills the frame. Taken during the Vietnam war when many American troops were stationed in Japan, it provides a window into a time of tenuous companionship, where those on the margins (and with open minds) found love and friendship where they could. Priced at €5000.

Benrubi Gallery (here): Karine Laval has been exploring the aesthetic edges of refracted water for many years now. This recent work adds in an aspect of physical crumpling, using bends and crinkles in the paper to echo the abstract patterns in the sun-dappled water. Priced at $4000.

Martin Asbæk Gallery (here): This recent work by Elina Brotherus was part of a project for the Prix Elysée where she re-executed a series of Fluxus image assignments. Here she stands in a field of sunflowers with a bag over her head to prevent us from centering our attention on her face. The image is at once both undeniably odd and quietly lovely. Priced at €6000.

Martin Asbæk Gallery (here): Trine Søndergaard’s most recent work goes inside the silent rooms of an empty castle in Copenhagen, finding layers of formal interest in its doors and passageways. Like Robert Polidori’s images of Versailles, the picture celebrates the tactile wear of surfaces and the touch of pure white light. Priced at €10000.

Part 5 of this summary report can be found here.