This is Part 2 of our summary report on Paris Photo 2017.

Part 1 of the report (here) explains the rationale behind the decision to feature only female photographers this year and includes an explanation of the format used in the detailed slideshow below. So while it is certainly possible to jump directly into any one of the individual reports, start back at the beginning if you want to understand the context. 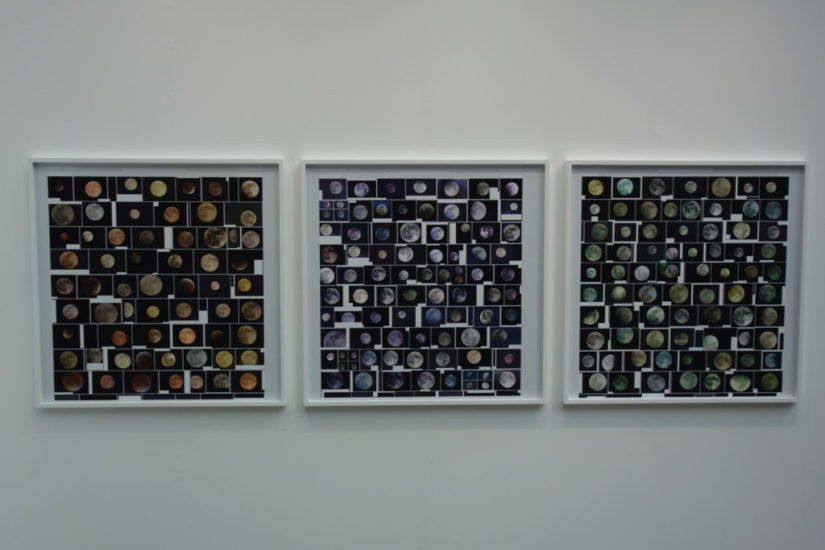 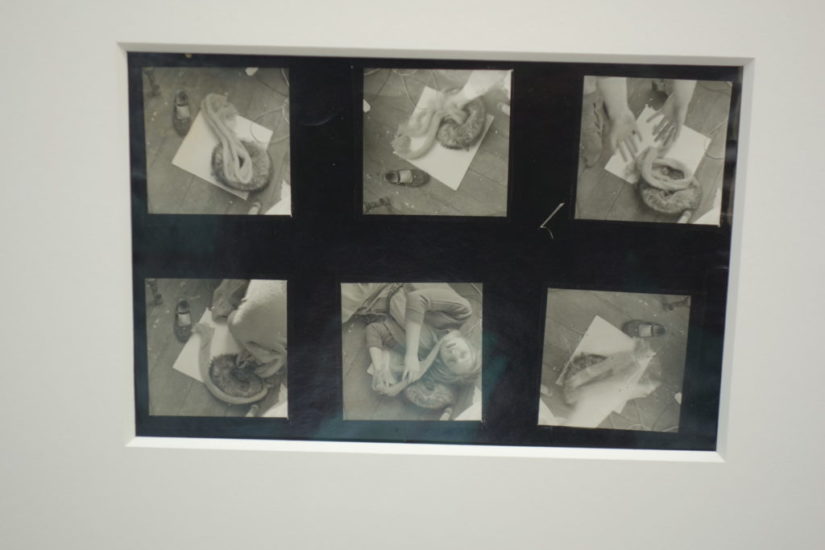 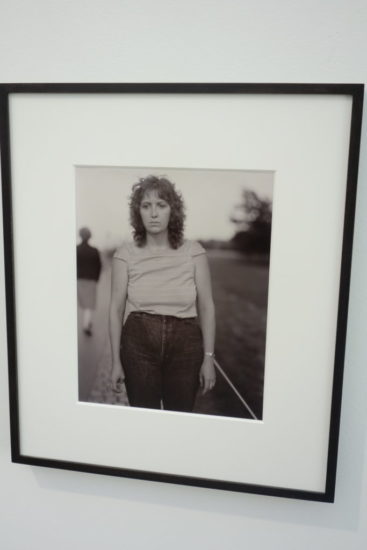 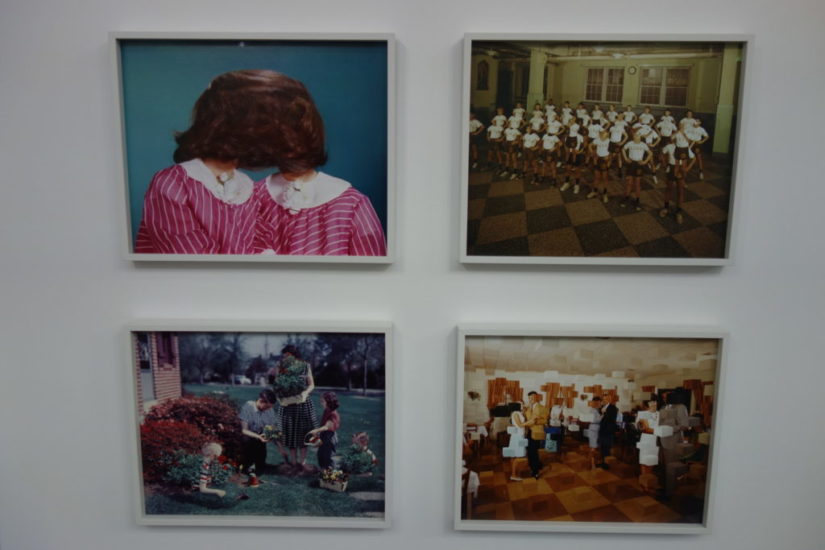 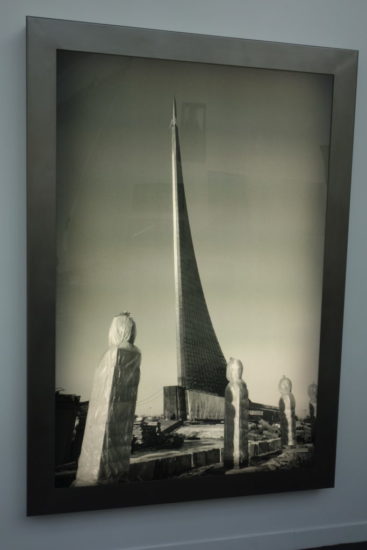 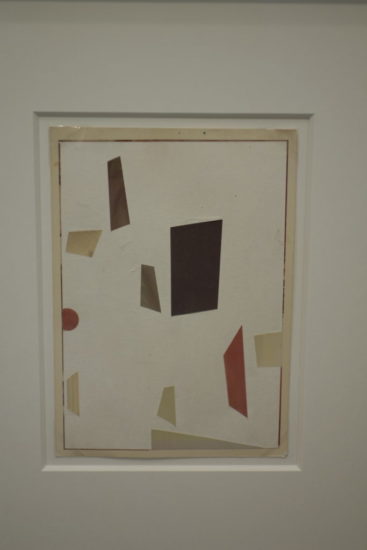 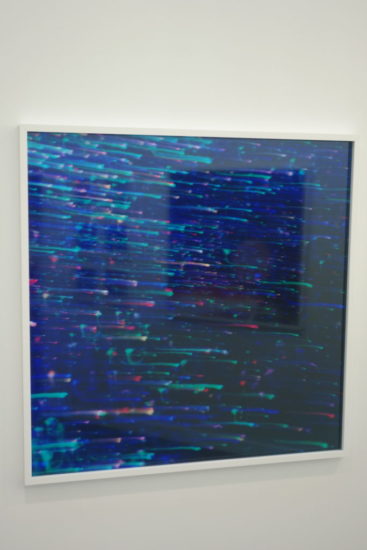 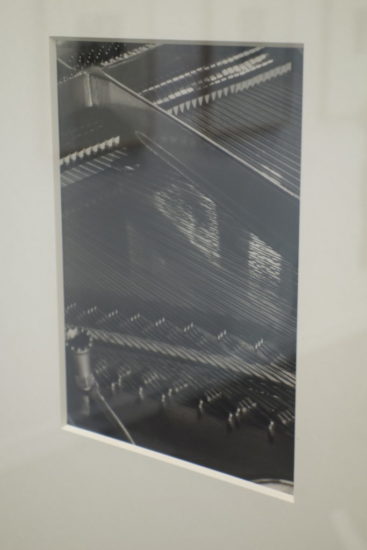 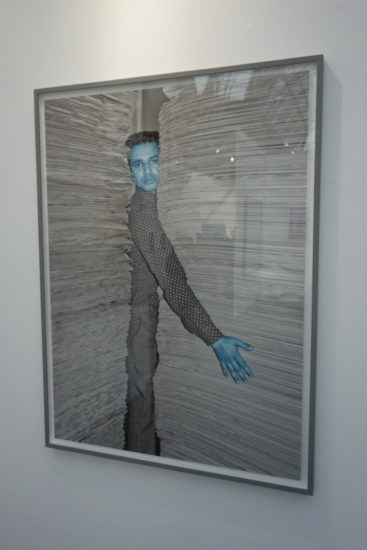 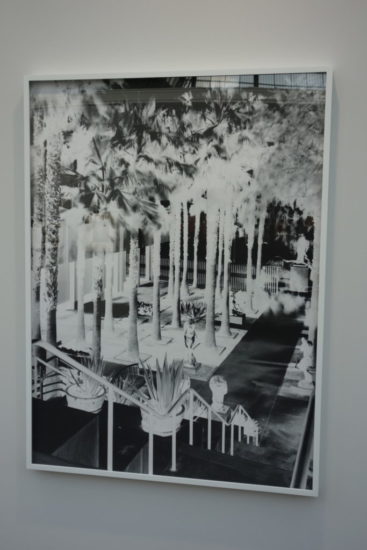 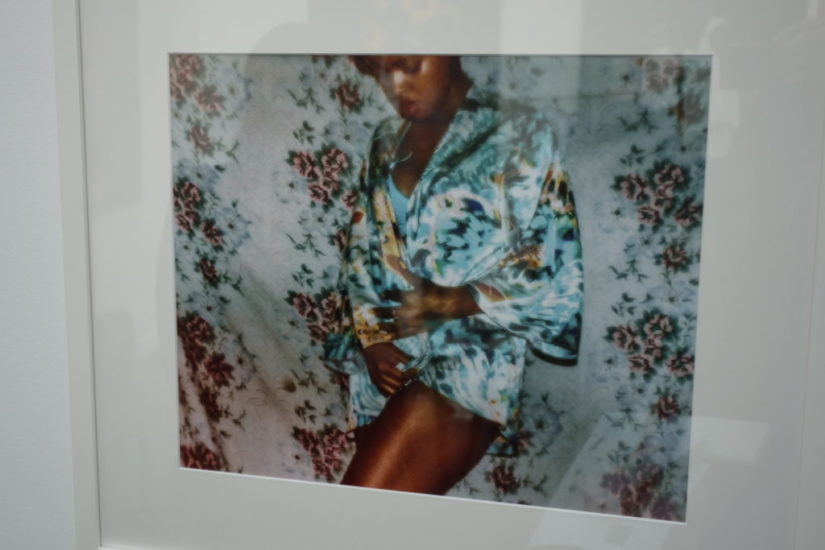 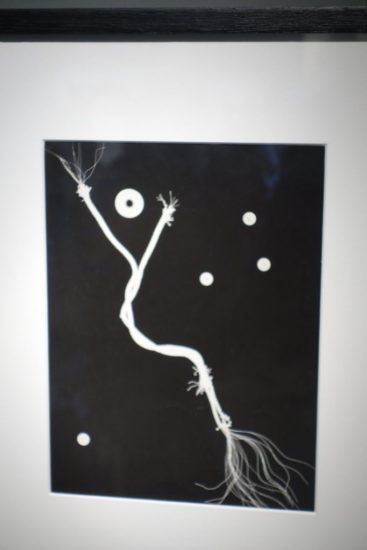 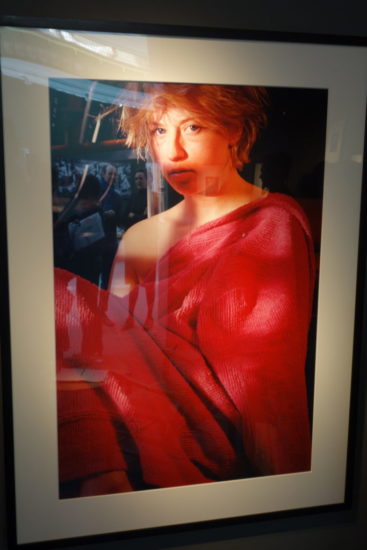 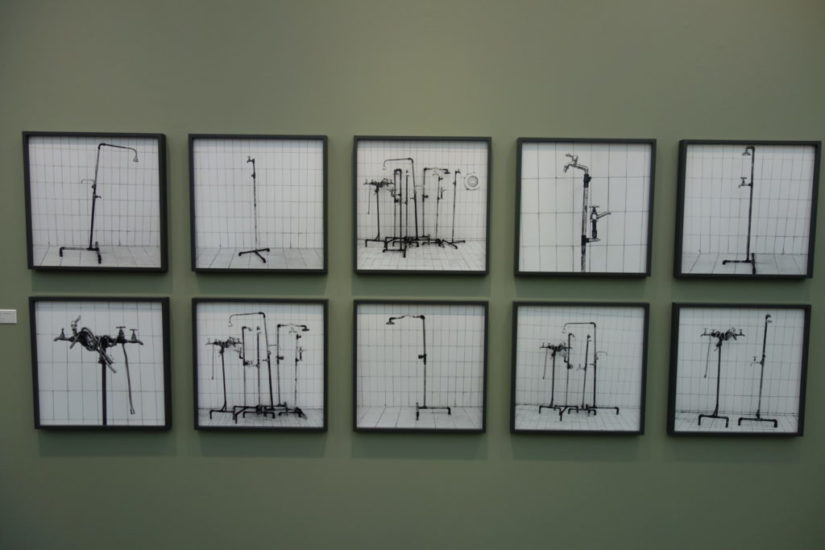 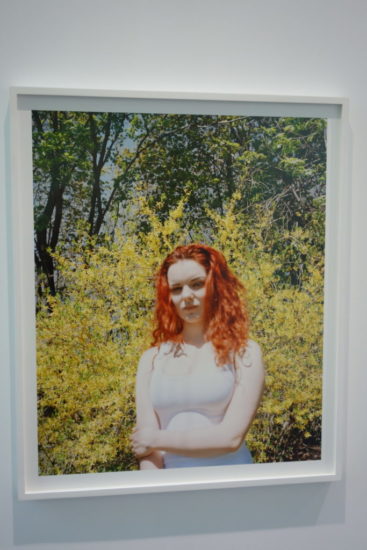 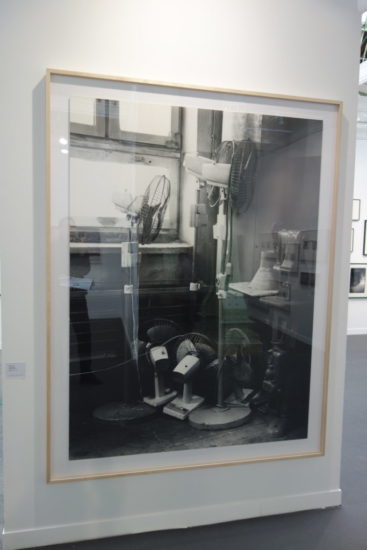 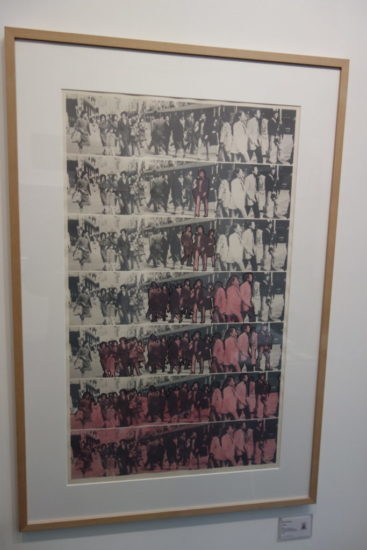 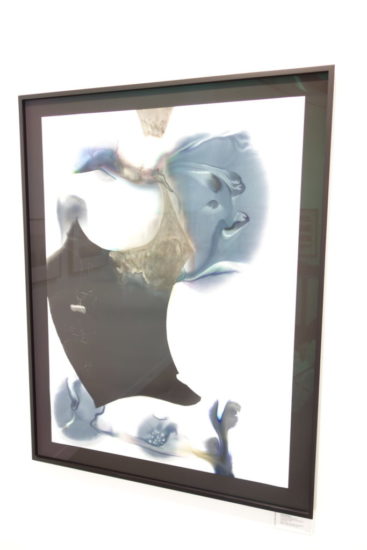 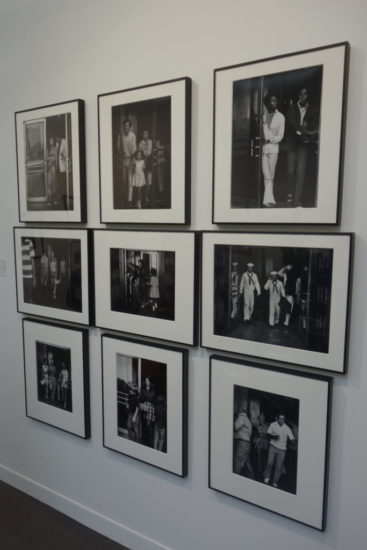 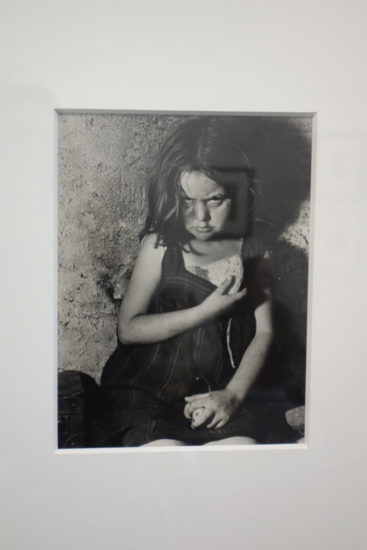 Bruce Silverstein Gallery (here): Penelope Umbrico’s arrays of moon pictures remind us that certain iconic subjects have been photographed endlessly. Sourced from Flickr and sanitized of identifying information, the images have been sorted by color, into variations of red, blue, and green, and screenshot once again as dense composites of similarity. Each priced at $11000.

Bruce Silverstein Gallery (here): This set of exposures finds Francesca Woodman playing with seriality, turning a self portrait with a fur hat, a scarf, and one shoe into a rotating exploration of iteration. Priced at $35000.

Galerie Thomas Zander (here): The details of this 1984 Judith Joy Ross portrait resonate clearly, even when we don’t know the entire story. The glazed eyes, the numb expression, the distracted gripping of fingers – they all make perfect sense when we read the wall caption and understand that this portrait was made at the Vietnam Veterans Memorial. Priced at €8400.

In Camera Galerie (here): Starting with found photographs, Weronika Gęsicka has given family scenes and dated school setups a surreal twist, disrupting the images with digital distortions, repetitions, and other clever Photoshop manipulations. Each uses its contents against itself, the leaves of a merry gardening scene subtly overwhelming the children. Priced at €1600 each.

Temnikova & Kasela Gallery (here): This massive lightbox work by Olga Chernysheva walks a thoughtful line between propaganda and satire. The toweringly vertical Soviet monument to space travel is flanked by statues of heroic cosmonauts, each carefully wrapped in plastic and surrounded by construction rubble. Priced at €30000.

Toluca Fine Art (here): This intimate work by the Colombian artist Johanna Calle turns a found photograph into a geometric abstraction. Using a delicate process of removal, portions of the image have been scraped away, leaving behind the floating polygons of color. Priced at €15300.

Galerie Gilles Peyroulet & Cie (here): This 1924 image by Aenne Biermann revels in tactile Modernist forms. The strict geometries of the piano wires and hammers lead to striated diagonals and saw tooth patterns, the whole composition burnished with a subtle glow. Priced at €40000.

Gagosian Gallery (here): This new image from Vera Lutter was taken in the Rodin sculpture garden at LACMA. Her camera obscura process transforms the palms into a dense array of ghostly echoes. Priced at $50000.

Magnin-A (here): This interior self-portrait by South African photographer Phumzile Khanyile seems to shimmer and shift. The soft blur of her aesthetic intermingles the patterns of the wallpaper and the silk kimono, creating a sense of muted tension. Priced at €2040.

Galerie Sophie Scheidecker (here): The drapery of the red cloth blanket in this 1982 Cindy Sherman self-portrait really pops from afar, and then a few steps closer, her direct stare peers out from under a tussle of hair. The combination gives the picture its overtly seductive quality. Priced at €500000.

Pace/MacGill Gallery (here): This array of images by Yto Barrada turns grubby plumbing pipes and fixtures into surprisingly elegant sculptural forms. Set against white tile, the spindly metal structures stand with awkward balance, their private parts on view for all to see. Priced at $60000 and already sold.

Pace/MacGill Gallery (here): There is something about the inversion in focus in this work by Jocelyn Lee that feels just right. The bright yellow forsythia in the background is seen in crisp detail, while the red-headed figure in the foreground is lost to blur. While this reversal would seem like a mistake in a family snapshot, here it seems to hint at a sense of subtle miscommunication or misunderstanding. Priced at $6000.

Galeria Joan Prats (here): The backlit shine of the bright light from the window gives this extra large image by Hannah Collins its interest. The cluster of fans in a Krakow factory provides the unexpected sculptural forms, and the light generates the varied tonalities. Priced at €16000.

Yumiko Chiba Associates (here): Kazuyo Kinoshita’s 1975 image repetitions taken from a dense sidewalk of pedestrians incrementally use pink-tinted outlines to single out specific people. As the scene repeats, the featured group gets larger and larger until it once again encompasses the entire scene, the conceptual exercise of iterative progression forcing us to see the crowd as various discrete units. Priced at $8000.

Stephen Daiter Gallery (here): This series of works by Barbara Crane from 1970 captures people as they pass through a set of double doors. She tracks couples, sailors, families, and other pairs and groups, using the channeling motion of the door (and the unexpected presence of the photographer) to generate memorable movements and combinations. Priced at $6000 each.

Stephen Daiter Gallery (here): This 1938 image by Margaret Bourke-White documents a protective moment in the life of a Spanish refugee girl. Clutching her food, she clearly had no interest in being bothered. Priced at $10000.

Part 3 of this summary report can be found here. You can jump to Part 4 here and Part 5 here.