As I was coming over on the night flight from New York for my annual trip to Paris Photo, I was thinking about what I could do to introduce a sense of freshness into my summary of the fair. For many years now, I have been reporting on the photography to be found at Paris Photo, systematically going from booth to booth, selecting one work from each and every stall in the sprawling Grand Palais. This process has had its own excitements and challenges, from being forced to choose from an embarrassment of riches to struggling to select even one picture worthy of recognition, and overall, such a sampler does I think provide a decent cross section of all the kinds of work on view for those that can’t make the trip themselves.

As I scrunched my too tall frame into my too small airplane seat and tried (and largely failed) to sleep, I was turning over the idea of using themes this year. Maybe I could break the posts up into several groups. There might be enough solid examples for a selection of classic/vintage work, and perhaps a grouping of “brand new pictures” made in the past year or two. Or maybe I could divide the fair geographically, with units of Asian photographs or African work, or alternately, I could slide into genres, like abstract imagery or portraiture. No immediate answers presented themselves as I tossed and turned, so I figured I would let the fair itself tell me what to do once I could see what was being shown.

I typically divide the fair into five sections, following the map provided by the organizers, and so when I arrived, I started at the front door and dove in. In my first booth (which happened to be Karsten Greve), I selected a surreal Ilse Bing image from a solo show of her work. In the second (Stevenson), I singled out a new overpainted work by Viviane Sassen. In the third (Les Filles du Calvaire), I chose an abstract tumble of wooden cubes by Noémie Goudal. And so the theme presented itself. Three booths, three female photographers.

But selecting a single work by a female photographer from every booth at Paris Photo turns out to be an impossible task. There are many booths, from solo presentations to multi-artist groups, where there are simply no works by women on view, and even though the gender of the maker may not always be the most relevant metric for evaluating an artwork, being forcefully faced with the absence of women in so many places was undeniably an eye-opener.

Faced with this reality, I decided to relax my stringent rules this year and allow myself to choose more than one work in a booth when the situation warranted it. So for this summary report, the booths with no work by women at all (or no particularly notable work by women), there is no selection; for the booths where women are represented more fully, there is a minimum of one selection, and in some cases, two or even three pictures are featured. When the dust settled, I still ended up with roughly 100 images to talk about more fully, spread across the five physical sections of the fair map.

Using gender to create a core sample from the overall terrain of Paris Photo certainly creates its own rhythms, distortions, and insights. Some themes and discoveries, as drawn out from my selections:

What other patterns emerge from this sampler, I will leave to my readers to discern (and add in the comments section as appropriate).

Practically, this summary report is divided into five slideshows of image highlights, roughly organized by physical location in the Grand Palais. This first segment starts with the booths found in the center of the fair (from the perspective of standing at the main entrance) and each subsequent report (over the next few days) will follow my path through the fair, finishing up the first section and then moving to the left and right. The structure for the information remains same as in years past– gallery names/links are followed by notes and comments on the particular work featured, including the artist/photographer name and the price of the work (typically in euros or dollars) where available. 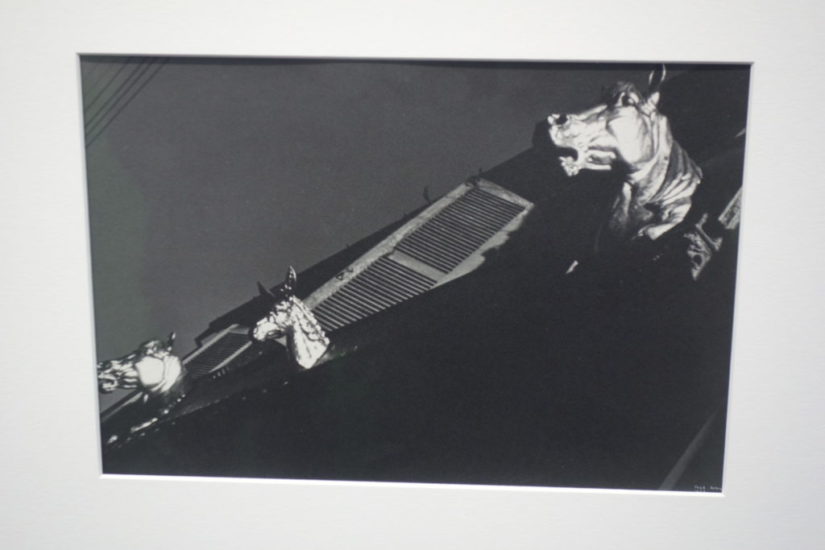 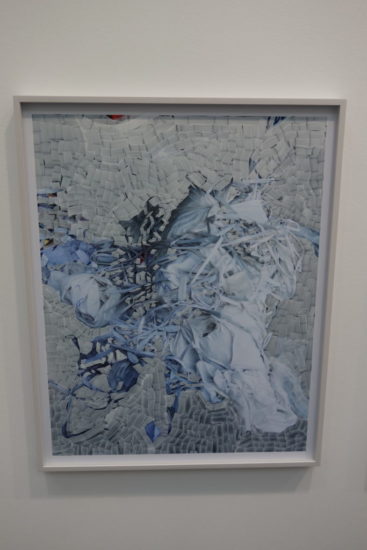 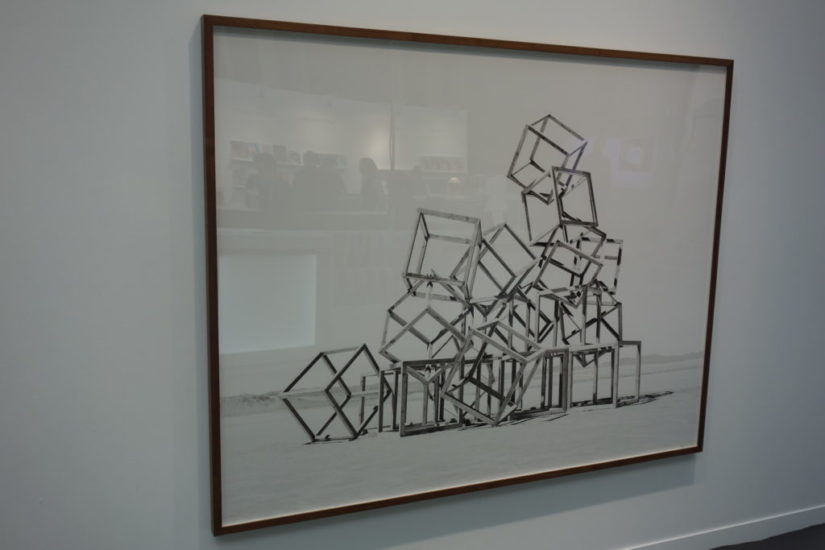 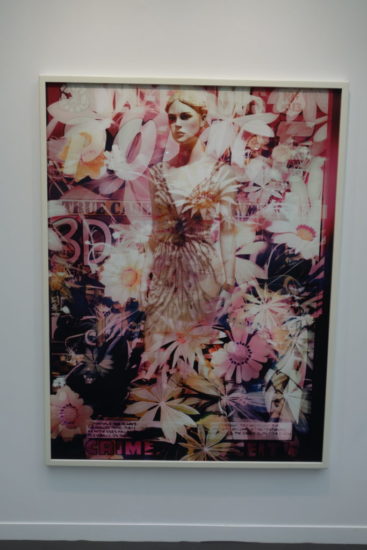 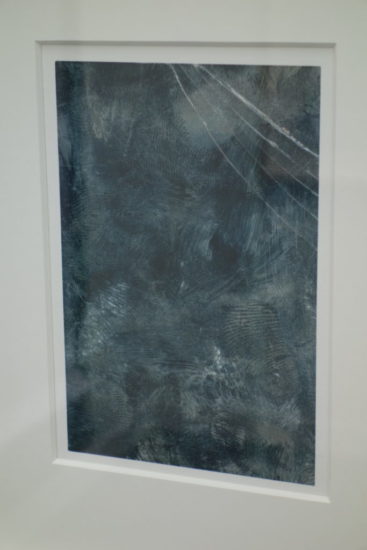 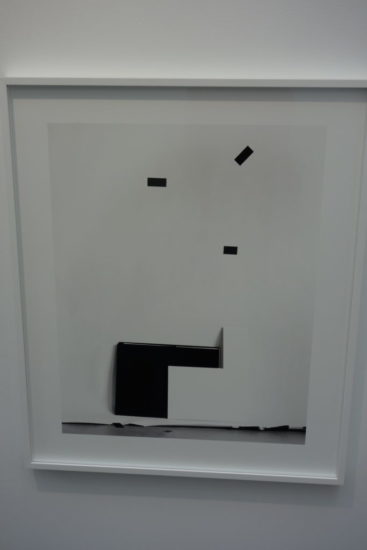 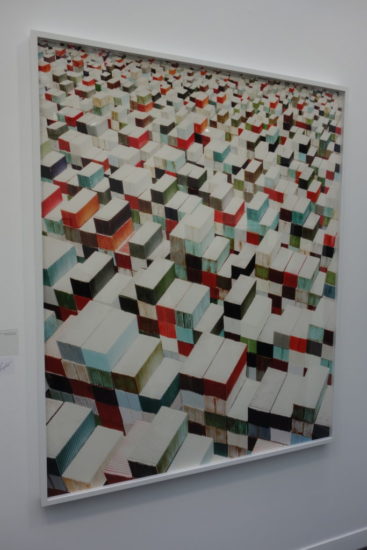 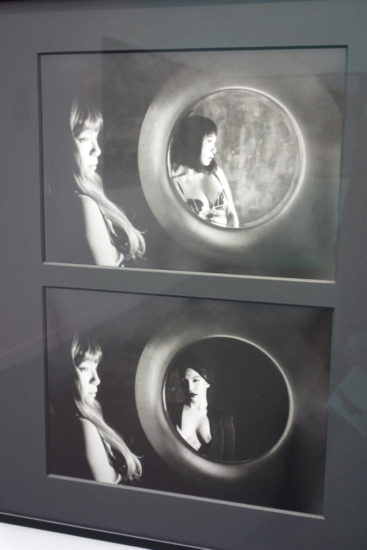 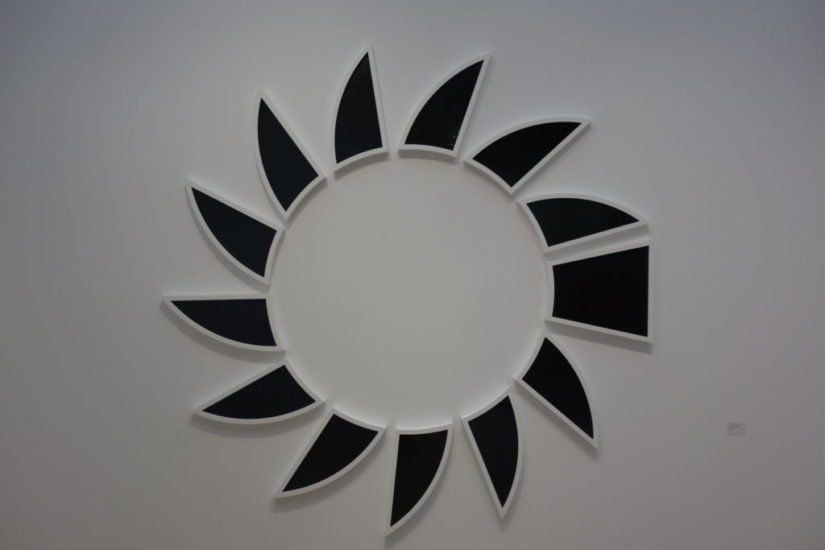 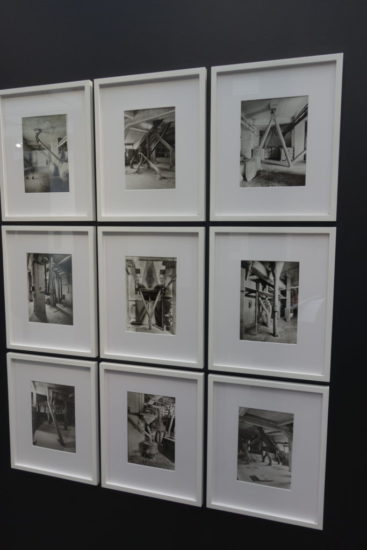 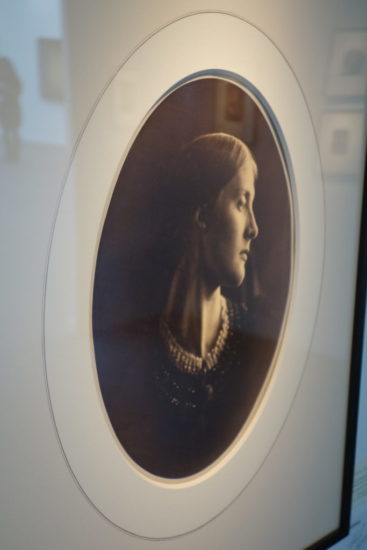 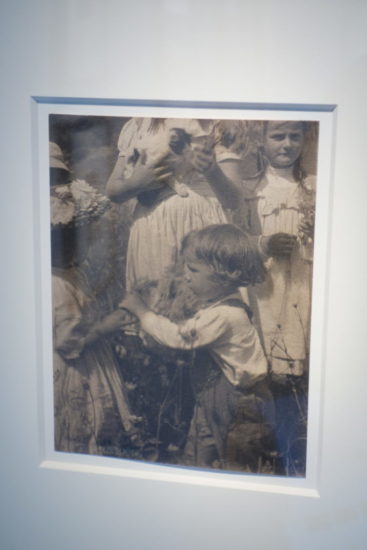 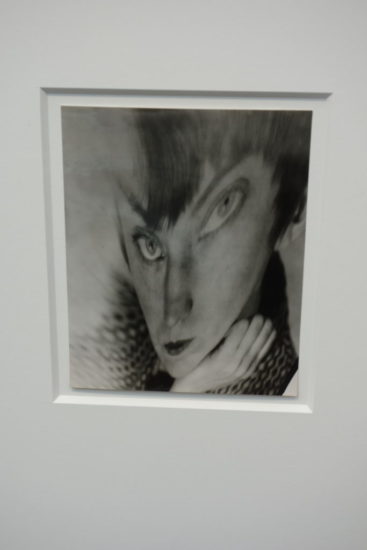 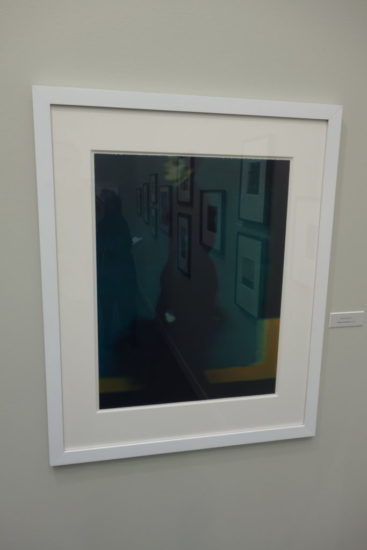 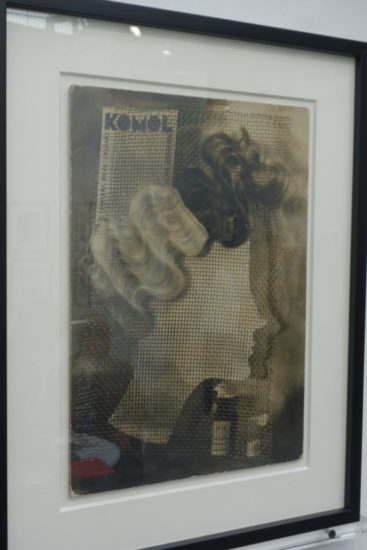 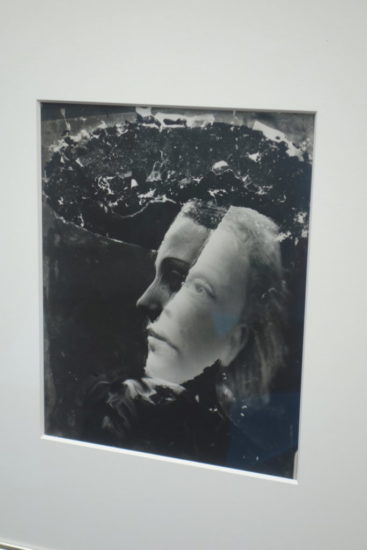 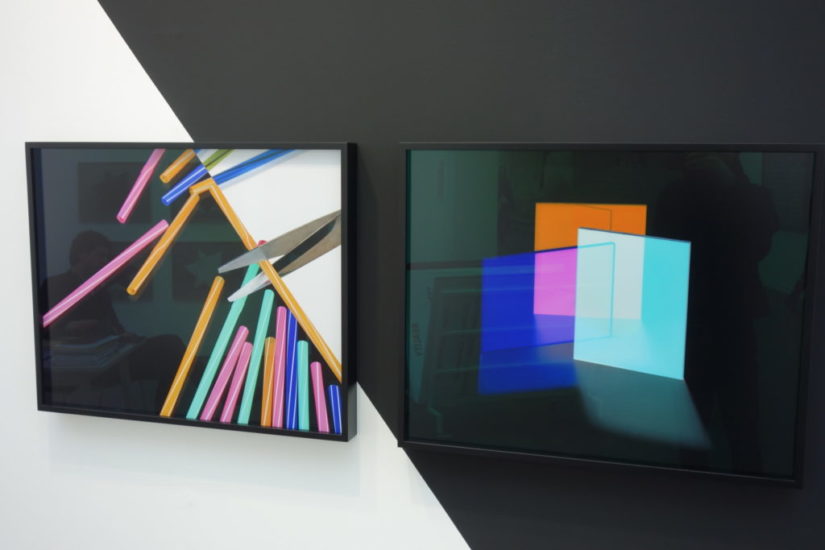 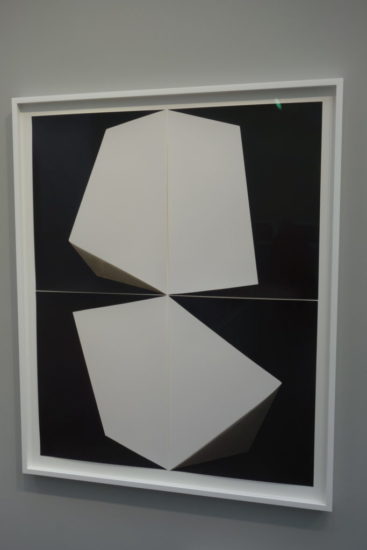 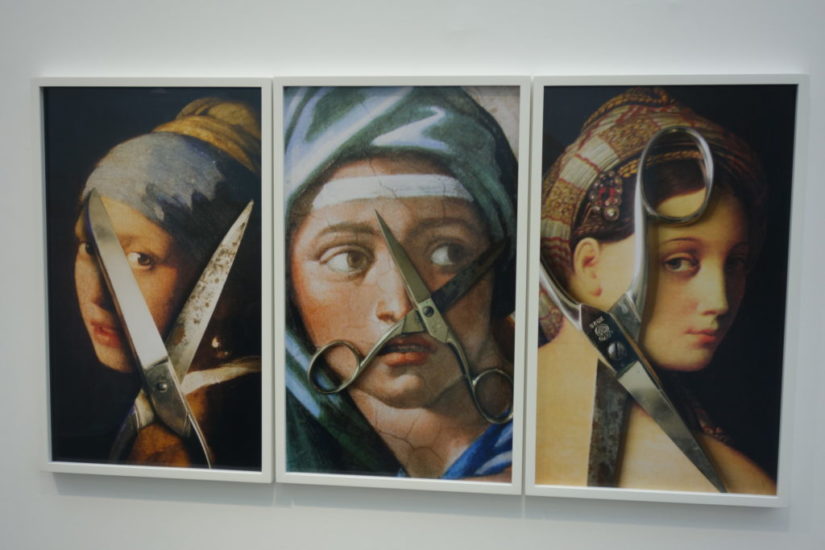 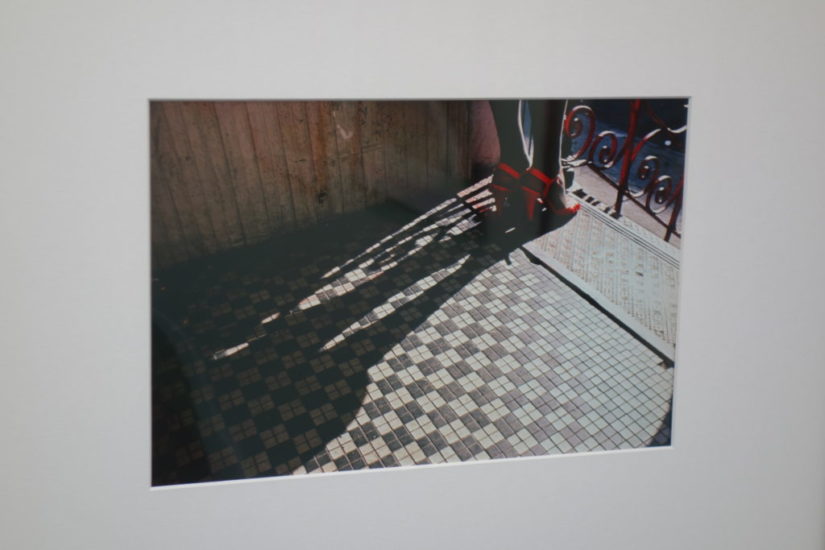 Galerie Karsten Greve (here): This booth was a solo show of the work of Ilse Bing, with work from a variety of locations, including France and the United States. This surreal underneath angle image from 1933 of the shining (almost threatening) heads of a horse butchery stood out for its aggressive eeriness. Priced at €14000.

Stevenson Gallery (here): This works comes from Viviane Sassen’s new series/photobook Of Mud and Lotus. While her last project included gestural overpainting that was then rephotographed, here the painting is part of the finished work. In this particular image, knots of cloth are surrounded by rhythmic brush strokes in white, creating a pulsating set of interconnections and echoes. Priced at €11000.

Galerie Les Filles du Calvaire (here): This large work by Noémie Goudal interrupts a flat desert landscape with a jumbled tower of wooden cubes. The effect is something like reinventing a mountain form, introducing hard-edged geometries into a natural setting. Priced at €19000.

Galerie Nathalie Obadia (here): This new work by Valérie Belin was made as a commission for the French perfume house Guerlain. It follows up on her recent series All-Star, mixing fragments of comic book imagery with stylized flowers and the central figure of a stylish mannequin. The chaotic details seem to overwhelm the woman, burying her in swirling layers of pink. Priced at €36000.

Galerie Christophe Gaillard (here): This small abstraction by Isabelle Le Minh is actually the surface of a smartphone. Dusted for fingerprints and highlighted by the cracked glass, its gestural movements recall Cy Twombly’s chalkboards, but with a splash of 21st century technology and culture. €1900.

Galerie Christophe Gaillard (here): This austere work by Marina Gadonneix is a documentation of absence. Its mysteriously elemental black and white forms are the leftovers of a photo shoot, the Calder sculpture that was its subject now removed. The conceptual inversion is clever, the stage now empty, becoming an artwork on its own. Priced at €5000.

Galerie Tanit (here): This large scale color work by Sonja Braas is actually a meticulous in-studio construction. The endless piles of shipping containers were constructed on her floor, the overwhelming mass of commerce filling the frame. Priced at €15000.

Taka Ishii Gallery (here): This series of images by Tokyo Rumando uses a round mirror as a doubling mechanism for self-portraiture. The artist is seen in both locations, with versions of herself, or roles, or subconscious fantasies reflected back at us. Priced at €2400 for the diptych.

Fraenkel Gallery (here): This new work by Liz Deschenes arranges her subtle daylight photograms into a symbolic homage to the gun barrel camera of Étienne-Jules Marey. The surfaces of the component images are covered in nearly imperceptible washes and chemical residues. Priced at $180000.

Galerie Kicken Berlin (here): These early 1980s works by Tata Ronkholz were taken in industrial sites and factories in the Rhine valley. She has created elegant formal studies out of these crusty pipes and tubes, her subtle gradations of black and white tonality filled with rich layers of geometries. Priced at €6000 each and already sold.

Hans P. Kraus Jr. Fine Photographs (here): This ethereal portrait of Julia Jackson by Julia Margaret Cameron was the most notable 19th century work made by a woman to be found at the fair. It’s hard not to be seduced by its restrained grace and nuances of light. Priced at $165000 and shown from the side to minimize the reflection in the glass.

Hans P. Kraus Jr. Fine Photographs (here): This 1903 print by Gertrude Käsebier entitled Happy Days is filled with rich signifiers of warm innocence – wildflowers, bonnets, white dresses, and even a kitten. Executed in luscious platinum, it has the romantic patina of an idealized childhood. Priced at $75000.

Howard Greenberg Gallery (here): This 1940s print of Berenice Abbott’s famously distorted 1930 self-portrait is full of brash surreal innovation. Her face has been stretched into an angular mask, with wondrously penetrating and off-kilter eyes. Priced at €25400.

Howard Greenberg Gallery (here): This study in dark blue by Sarah Moon is difficult to see, but up close, its sinuous textures dissolve into grand softness. It turns the fashion genre into something more elusively expressive and emotive. Priced at €15500.

Galería Jorge Mara-La Ruche (here): This vintage commercial still life by Ringl + Pit (Grete Stern) is filled with competing textures. Wire mesh, silky hair, and a silvery backdrop are assembled into the rudiments of a figure, bringing a playfully smart Dada aesthetic to everyday advertising. Priced at €14000, and already sold.

Edwynn Houk Gallery (here): This 1936 double portrait by Dora Maar seems to capture the essence of a split personality or the wearing of masks. The artist’s face is twinned in the normal space of the head, giving her a shifting back-and-forth unease, with the crackled emulsion at the top creating the form of a hat. Priced at $175000.

Klemm’s (here): This recent work from Viktoria Binschtok’s Cluster series plays with echoes of color and form. Starting with a photograph of her own, she then feeds the image into Google image search, letting it find similar matches, which she then restages. The result are pairs and groups of images that recursively build on themselves. Here colored straws are echoed by planes of plastic, with the line on the wall traveling right through the image. Priced at €12000 for the diptych and painted wall arrangement.

Yossi Milo Gallery (here): This new work by Alison Rossiter continues her exploration of larger forms. The poured/dipped abstraction sets off polygons of white against black, with small areas of in between grey breaking the rigidity of the composition. Priced at $28000.

Galerie Françoise Paviot (here): This provocative triptych by Lydia Flem introduces scissors into famous paintings by Vermeer, Michelangelo, and Ingres. The implied mutilation effect is boldly violent and anti-female, the sharp edges cutting off ears and gouging out eyes.
Priced at €4400.

Galerie Bene Taschen (here): This vintage cibabchrome print by Arlene Gottfried from 1980 revels in red. The high heeled shoes and the edge of the ornate railing give the nuanced pattern study a bright pop. €18000 for a set of 3 prints.

Part 2 of this summary report can be found here. You can jump to Part 3 here, Part 4 here, and Part 5 here.