This is the second half of our booth-by-booth coverage of the 2015 Unseen Photo Fair. If you’ve already read the first part, then head down to the slideshow below to continue the tour. If you haven’t, then head back to Part 1 (here) for a comprehensive introduction to the fair, an explanation of the format of these slideshows, and the first half of the booths. 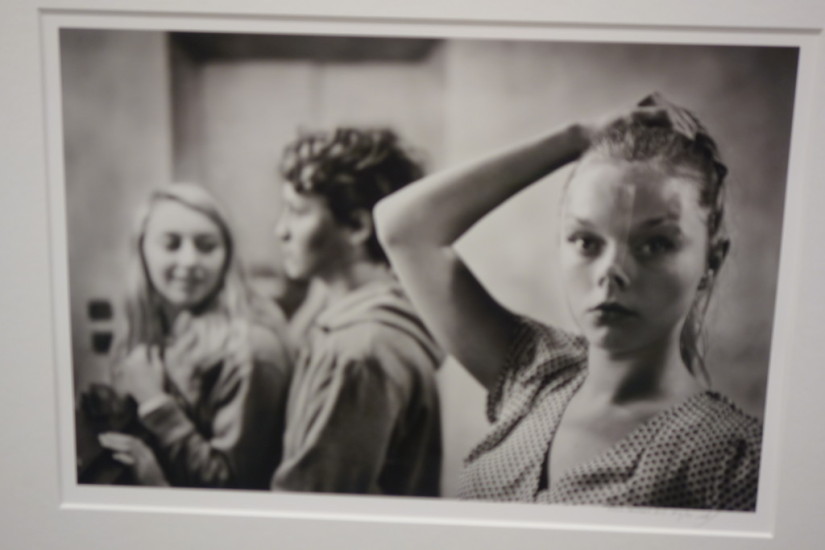 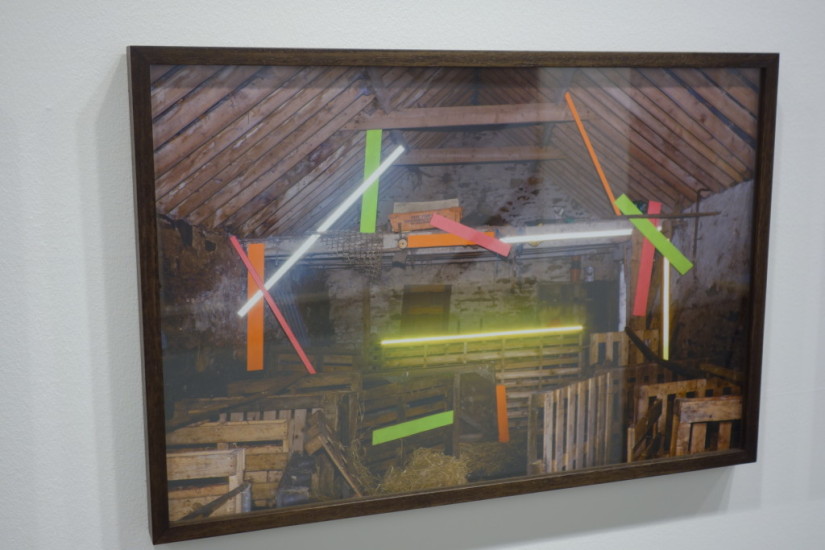 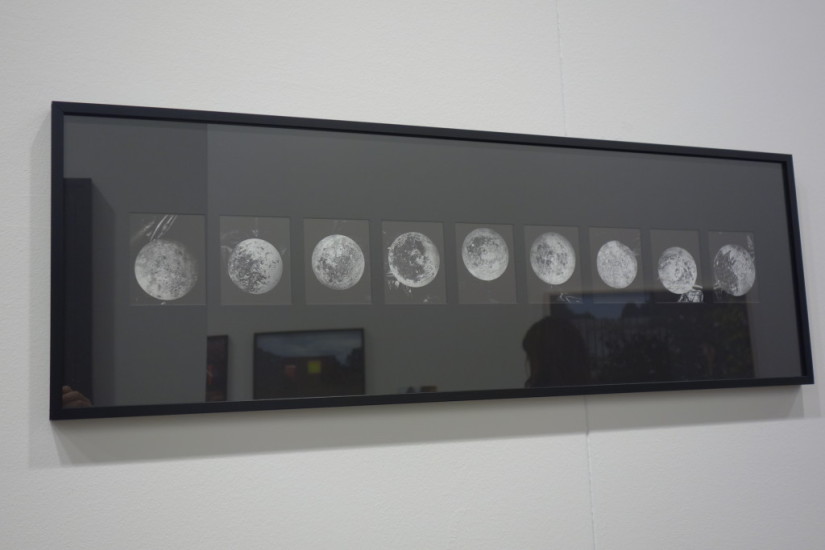 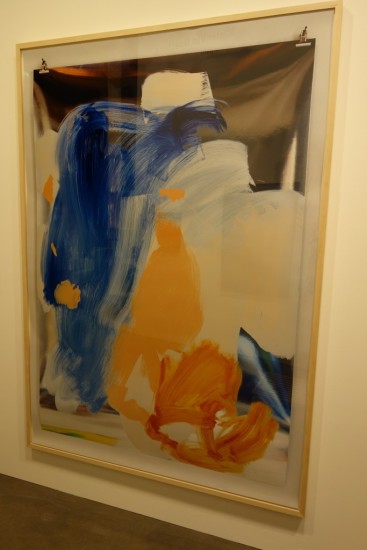 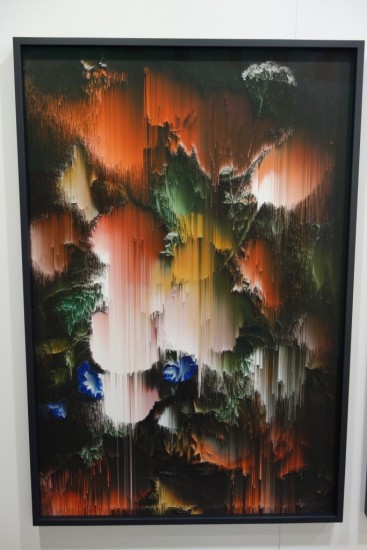 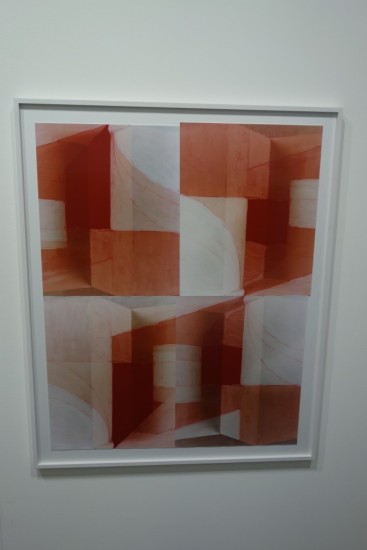 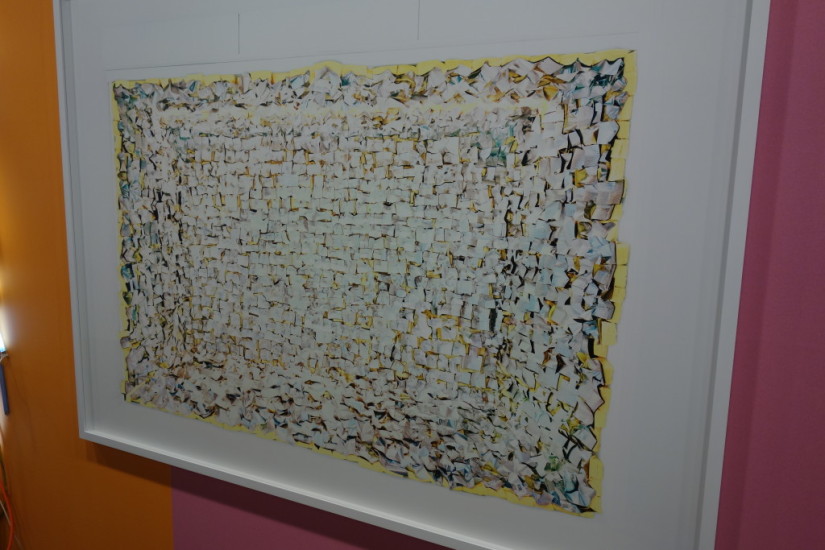 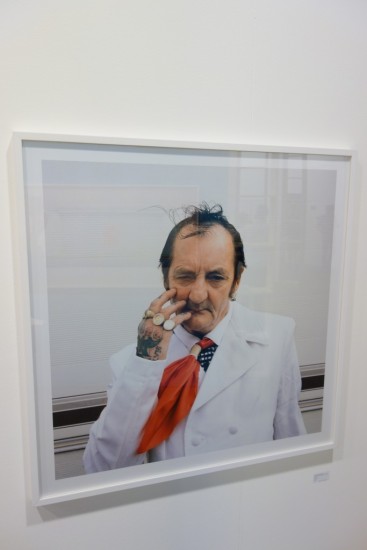 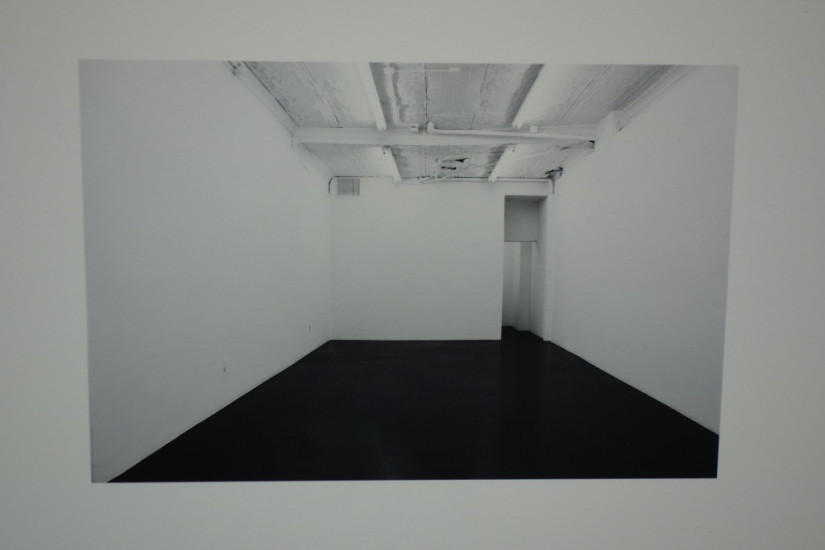 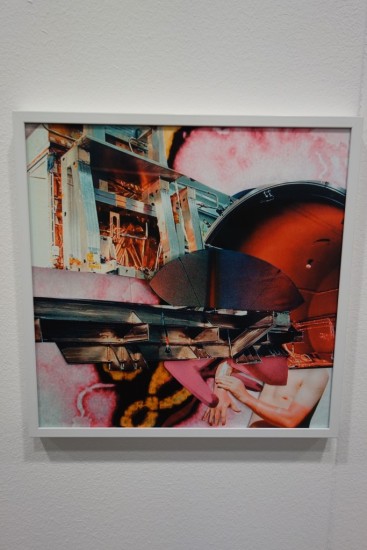 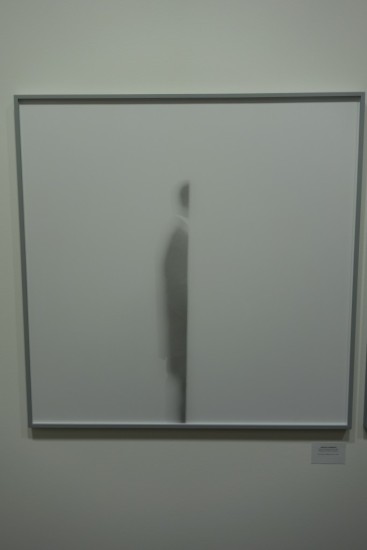 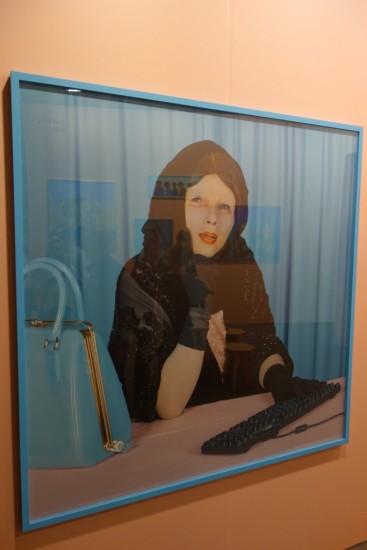 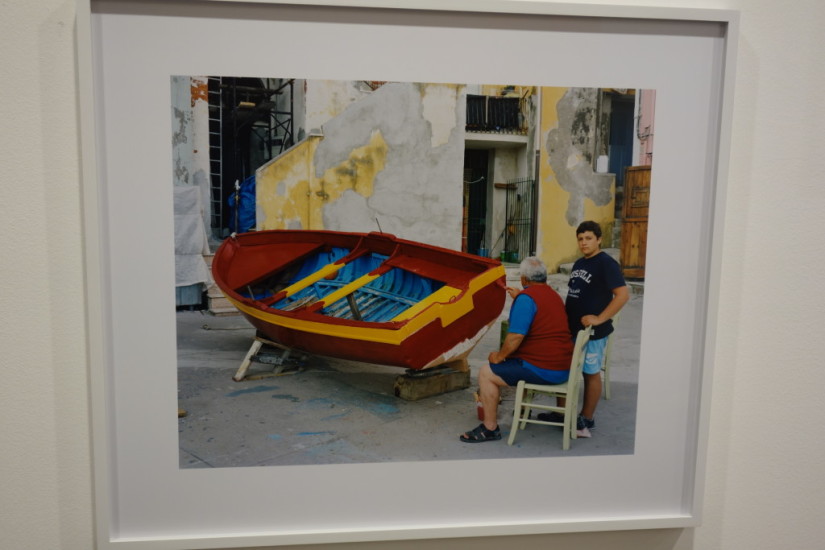 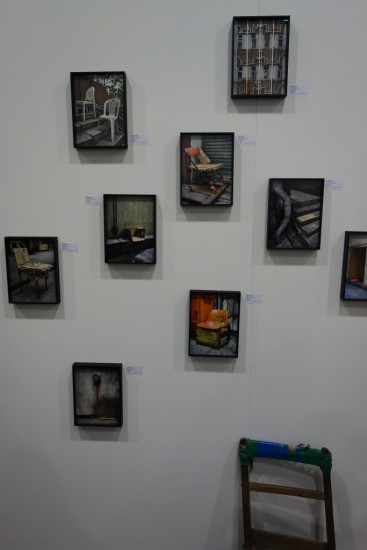 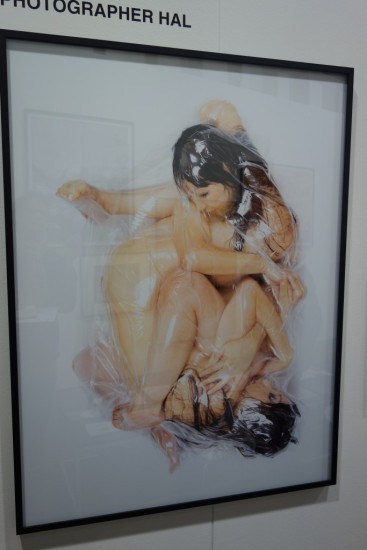 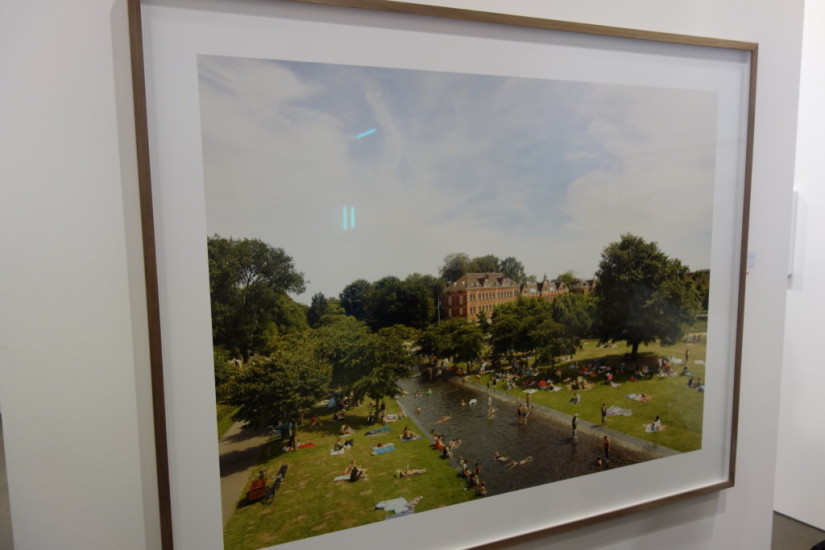 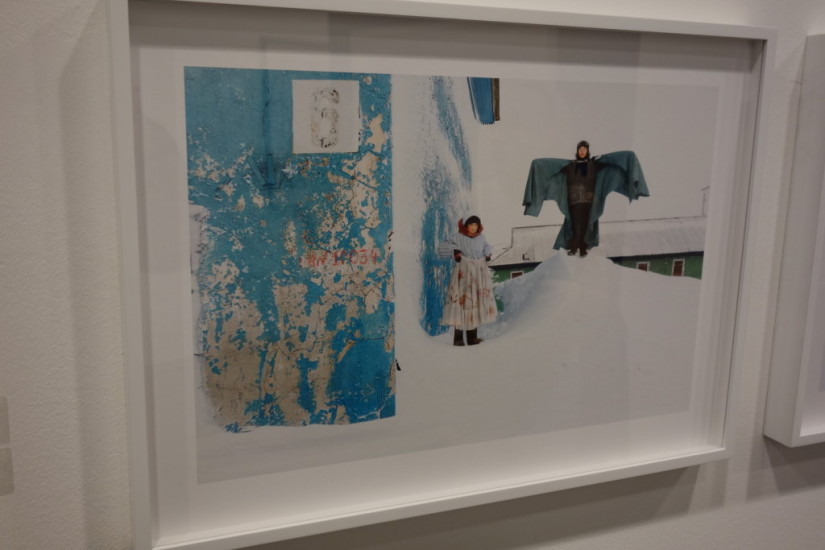 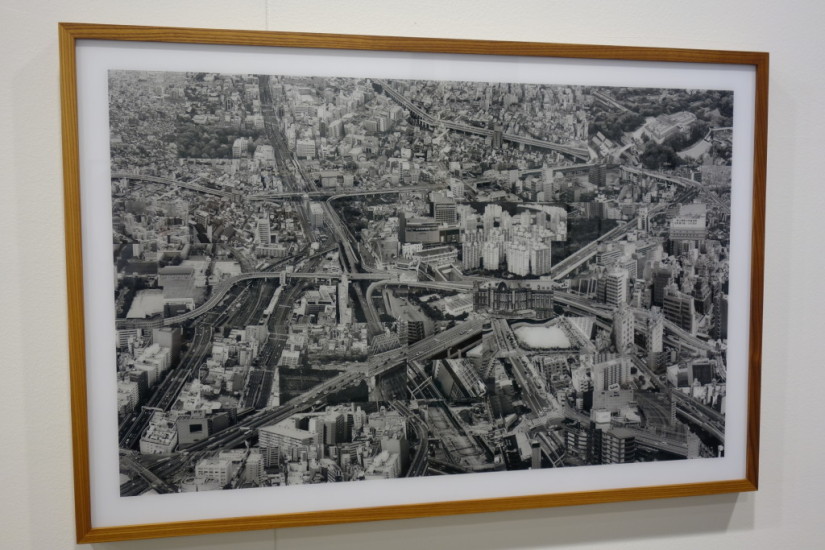 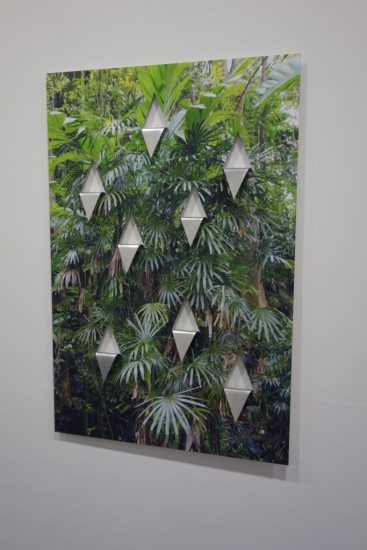 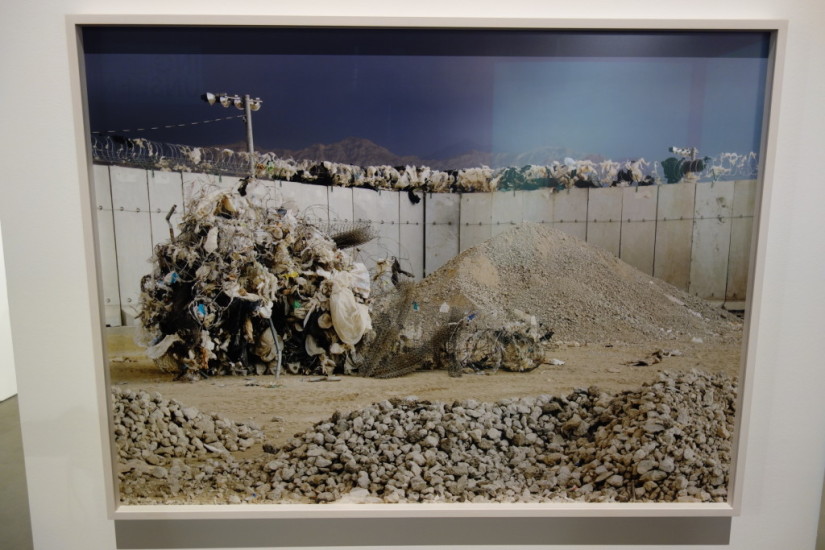 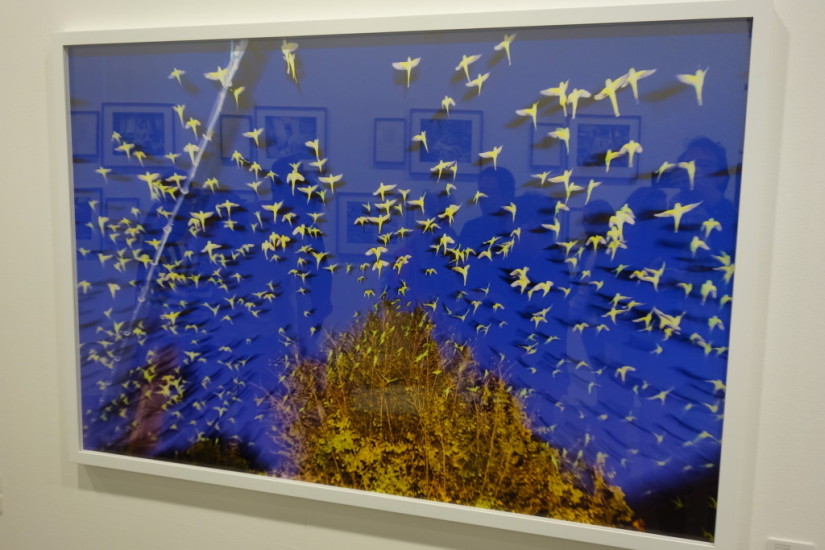 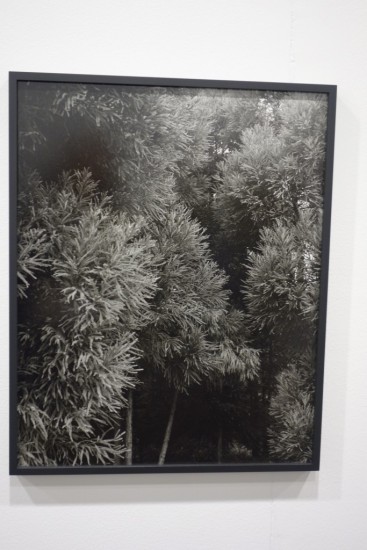 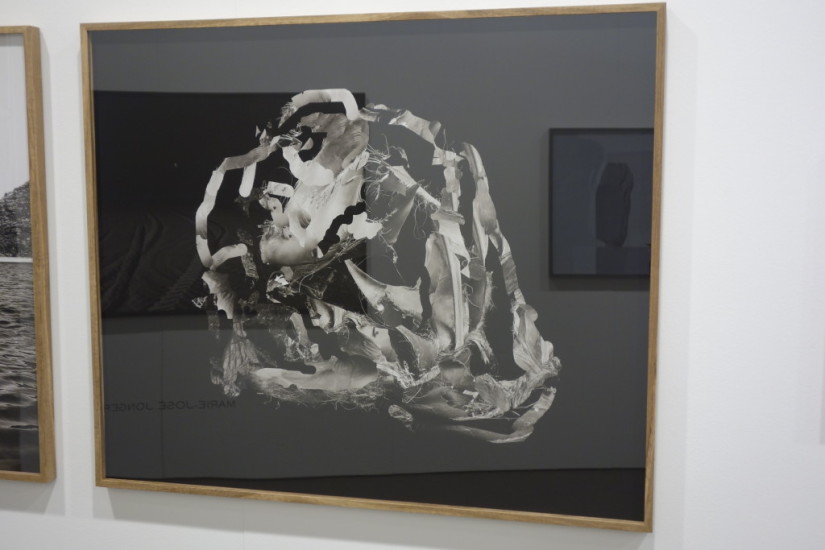 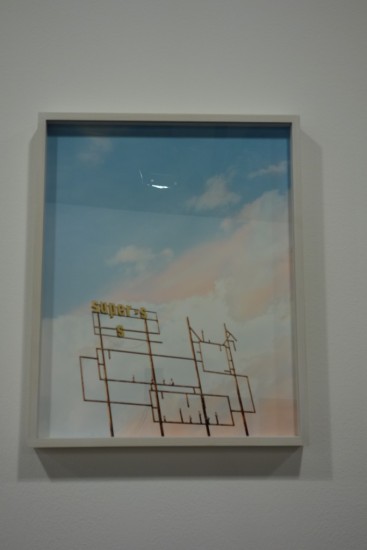 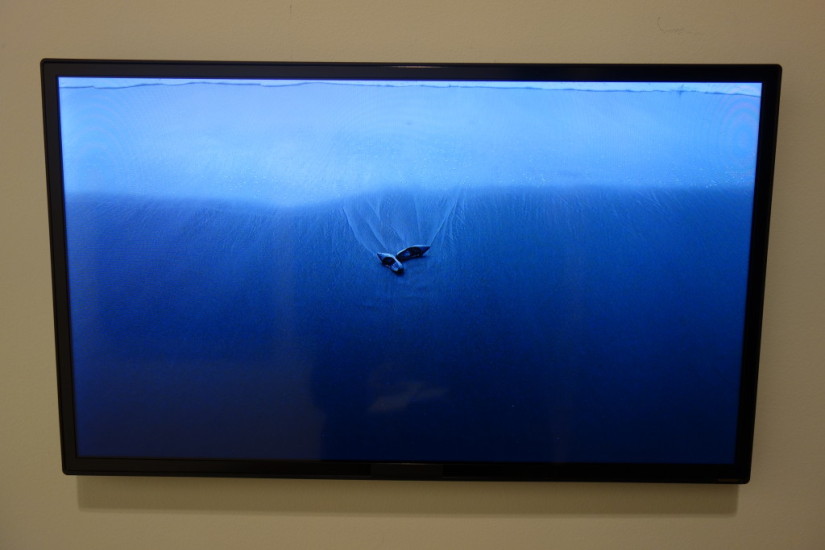 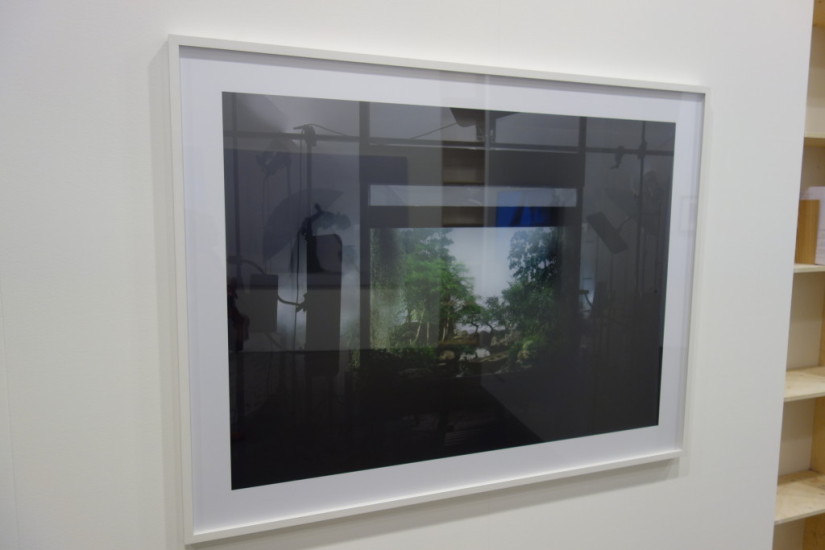 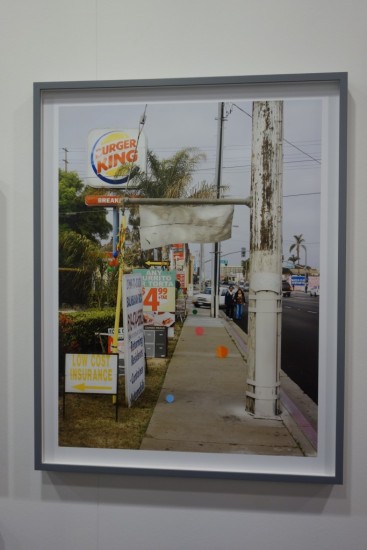 TORCH Gallery (here): There’s a distinct echo of Sally Mann in Alain Laboile’s unruly family pictures, but that doesn’t make the best of them less engaging. This nose pulled back by tape captures teenage rebellion and identity creation in a single memorable gesture. Priced at €1250.

Grundemark Nilsson Gallery (here): The moon is the central figure in this series of works by Johan Österholm. Images made from antique glass plates using moonlight as the light source have a personal resonance, while this progression of pictures has a more conceptual twist – the moons are actually lookalike round concrete balls set against a black surface (maybe a trash bag). The illusion is convincing enough to create some smart dissonance. Priced at €1900 for the set.

Stigter Van Doesburg (here): Peggy Franck’s large scale work unpacks layers of painterly process. Reflective paper forms the initial mirrored base, which both captures elements of the studio around her and forms the shifting surface for her expansive gestures. The resulting photograph combines the two with finality, replacing the painting with its photographic representative. Priced at €9500.

Martin van Zomeren (here): Iteration is the central idea in Katja Mater’s refined photographs. Four drawings make up the progression here, each one building on its predecessor (look closely at the swooping white areas in each quadrant to see the changes), with the resulting images reoriented and arranged in such a way that the lines connect in a harmonious interlocked pattern. Her works feel both rigorously mathematical and interested in the precise passing of time. Priced at €5000.

LhGWR (here): Marleen Sleeuwits is an installation builder. Using empty office buildings as her stage, she cuts, builds, and transforms entire rooms, creating textured spaces designed to be photographed, often playing with physical scale in ways we can’t entirely follow. This image appears to be a shiny nest made of hundreds of insulation tiles stapled to every inch of the interior surface, the silvery squares punctured and folded to reveal the yellow fuzz underneath. It’s prickly and soft, machined and hand built, exaggerated and sleek at the same time. Priced at €7000.

Galleri Tom Christoffersen (here): Clémentine Schneidermann’s images from an Elvis festival in Porthcawl, South Wales, could have easily come from Graceland itself. Elvis impersonators of all shapes and sizes don sequined leisure suits and wigs, channeling the effortless cool of the King. This well made portrait turns on the details: the wispy hair, the rings and tattoos, and the tenderly weary gaze. Priced at €1600.

Dürst Britt & Mayhew (here): At first glance, Alexandre Lavet’s empty gallery images feel like something we’ve seen before – a straightforward study of formal angles in built space. But as it turns out, Lavet sources images of galleries from their websites and then systematically removes the artworks installed there via digital manipulation. So what we have is really an exercise in absence, a taking away process that leaves behind architecture. That inversion makes the pictures about what isn’t there, not what is, which got me thinking. Priced at €2400 in sets of 3.

Boetzelaer|Nispen (here): Anouk Kruithof’s newest works channel the oddball strangeness of Larry Sultan and Mike Mandel’s iconic Evidence, updating it for the flood of imagery Instagram age. Starting with images sourced directly from the Instagram accounts of corporate America, she built up layered cut and paste collages, which she ultimately rephotographed. The result here mixes unidentifiable technologies and infrastructure, something in a petri dish, and a man apparently applying sunscreen (or some other cream). Some of the works in the 28 image set have a caustic sense of humor, others a tinge of unsettling menace, and all of them play with formal relationships in interlocked physical ways. Apparently, the weirdness Sultan and Mandel saw decades ago is still very much alive and well, and out there now as part of overt corporate image making. Priced at €900 each or €17500 for the entire set.

Galerie Madé (here): I’m afraid that my gut reaction to most disappearing into white photographs is that they’re trying too hard (and mostly failing). But this image by Virgilio Ferreira felt fresh. The man vanishes behind the hard edge of the wall, creating both a bit of narrative mystery and a formal vertical zip. It’s ephemeral and graphic at the same time. Priced at €2050.

East Wing (here): This booth was a bold solo show of the work of Christto & Andrew, with painted walls, colored frames, and slick production values. Their surreal images dig into identity building in Qatar, with artifice and aspirational symbols doled out with equal flair. This image recalls the creepy masks of Gillian Wearing, here applied to cover the face of a hidden identity net-surfing woman (with head and hands covered in traditional black and flanked by a luxury handbag). Satire and cultural dissonance collide in these works, using exaggeration to deliver provocative commentary. Priced at €5800.

Andriesse Eyck Galerie (here): Cuny Janssen’s photograph of a Naples boat painting scene captures the family relationships, the cultural traditions, and the wariness of outsiders found there, all in one well-composed image. The parallel angles of the boat and the staircase in the background give the picture its active balance. Priced at €3000.

Galerie Wouter van Leeuwen (here): Michael Wolf has released several small photobooks of Hong Kong still lifes in the past few years, and this booth had an entire wall covered with his intimate prints of pipes, improvised chairs, boxes, and other found formal studies (an actual chair of wood and duct tape stood on the floor). Both quirky and crisply seen, the pictures are consistently tightly executed. Priced at €1200.

IBASHO (here): Vacuum packing lovers together for photographic portraits is undeniably gimmicky, but Photographer Hal’s images aren’t altogether throwaways. Alternately seen as nudes, in situ in their homes and offices, and jammed together with their favorite possessions, his pictures remove any extraneous space between the subjects, creating a suffocating intimacy. This is an undeniably weird (and innovative) idea, and it needs to get even weirder (not more conventional) to be taken more seriously. Priced at €4200.

Kahmann Gallery (here): Jeroen Hofman’s bird’s eye view of the summertime bustle in Amsterdam’s Westernpark recalls the work of Massimo Vitali. Dozens of tiny vignettes play out all over the terrain (on the grass, in the canal, under the trees) like a dense Peter Breughel village painting. Priced at €7500.

The Photographers’ Gallery (here): Evgenia Arbugaeva’s playful Tiksi snow scene is cleverly composed. The weathered blue wall stands flattened and straight, with the edge of the roof dangling down isolated by a blast of snowy icing; the kids pose on a sinuous curve of hardpack, with a blanket as a pair of imaginary wings. It’s a blast of timid joy in an otherwise bleak tundra. Priced at €2650.

Gana Art (here): Seung Woo Back’s newest city scenes overflow with impossible density. Constructed of dozens of individual aerial images stitched together so the roadways fit together in plausible connectivity, vantage points and perspectives twist in dizzying directions. From afar, the urban panoramas look almost normal – up close, they dissolve into the jittering chaos of imagination. Priced at €8000.

GRIMM (here): This new work by Letha Wilson brings her sculptural use of metal up on the wall. An image of fanned palm fronds is interrupted by peeled back triangles, the silvery sheen of the leaves echoed by the silver of the metal backing that has been exposed. Both the fronds and the triangles dangle with seemingly loose weight, intelligently mixing the imagery and the physical intervention. Priced at $8500.

Parrotta Contemporary Art (here): Edmund Clark’s landscapes from his series/photobook The Mountains of Majeed capture the view outward from inside various military bases in Afghanistan. Blast walls and concrete barriers are routinely juxtaposed with majestic mountain ranges, creating stark isolating contrasts. This particular image is even more extreme, with its piles of rocks, sand, and trash strewn razor wire, seen against the purple twilight of the mountains. With the formal lines of the compositions so carefully drawn, beauty and ugliness get inextricably swirled together. Priced at €6500.

IMA Gallery (here): Seeing this wild image from Yoshinori Mizutani’s Tokyo Parrots series (also a well made photobook by the way) is like watching Alfred Hitchcock’s The Birds on acid. Streams of neon colored birds blanket the thick royal blue sky, the whole picture seeming to seethe with surreal intensity. Priced at €1700.

Kristof De Clercq Gallery (here): This booth was devoted to the recent work of Awoiska van der Molen, drawn from her well regarded photobook Sequester. The book became known for its nuances of black and white (particularly in the dark ranges), and her prints here are in many ways even more impressive. The focal plane of this image is set back in the forest, blurring the foreground and bringing the bushy needles in the middle into lush enveloping detail. It’s a textural old school photograph to get lost in. Priced at €2200.

Ravestijn Gallery (here): This intricately interwoven work by Nico Krijno takes images of dry palm leaves and turns them into a digital thicket. Squiggled fragments of the source file are piled up, with erasures and realignments adding and subtracting from the mass of tangled lines. Reminiscent of the techniques used by Lucas Blalock, it leverages manipulation to undermine and rethink representation. Priced at €2350.

METRONOM (here): This skeletal sign image comes from a series called Approximation to the West by an artist pair calling themselves The Cool Couple. It chronicles life in Carnia in northwestern Italy, an area where Cossacks fleeing Russia at the end of World War II settled down. The project gathers clashing symbols of the visible divisions that remain, from hand gestures to horses. Priced at €1500.

Pi Artworks (here): In this solo booth show of the work of Maria Friberg, this video was the stand out. It’s a simple premise – a pair of abandoned pumps sit on the sand, and the waves come in and out, tumbling them over and drawing them down the beach into the water (by the way, it’s in traditional black and white, not a tint of blue as the image above seems to show). Made as a commission for the Hasselblad Foundation, it’s a strangely hypnotic artwork. It has mystery (have the inappropriate shoes been discarded, is the woman swimming, or has something more troubling occurred?) as well as a kind of subtle visual poetry. As the surf pushes and pulls on the shoes, the white water, the layers of light and dark grey sand, and the dark objects constantly rebalance their formal relationships. It’s an excellent example of a video work attuned to the nuances of photography. Priced at €8000.

Flowers Gallery (here): John MacLean’s series Hometowns goes back to the early age neighborhoods of various famous artists, finding (or inserting) elements of their stylistic signatures in the environment. Bridget Riley’s rolling farmland gets a striped sky, an electric tower in James Turrell’s town is shrouded in bright mist, and William Eggleston is represented by a rich red seat belt hanging out from a car door. His homage to John Baldessari is particularly apt, with colored dots placed on the sidewalk and a riot of commercial signage recalling his early suburban scenes. Priced at €3500.