While all art fairs are both entirely different and largely the same from year to year, AIPAD is one show that always seems to be in subtle flux. But this year’s effort, the last in the grand Park Avenue Armory prior to a move to the more cavernous Pier 94 next year, felt comfortably settled for the first time in a long time, with less quiet grumbling in the aisles and more consistent quality on the walls. For collectors like ourselves, the annual fair is both a manic and relaxed affair, a mad dash to see and process everything, and a more easy going time to catch up with dealers, curators, collectors and old friends who we only see once or twice a year.

This is our 8th year of in-depth AIPAD reporting, and with 86 booths to survey, we had a lot of ground to cover. As always, our systematically wandering eyes are dazzled by vintage favorites, astonishing rarities, overlooked/rediscovered finds, and new work alike, and our summaries try to find a well-edited balance between these categories of offerings, selecting one single work to feature from each and every booth. As regular readers and fair visitors know, this process isn’t always easy, as some stands seem to overflow with a mind-blowing array of treasures, making choosing just one an agonizing trade-off, while others test our ability to find even one work worth featuring. But the intellectual challenge of the one picture rule is part of the fun – it forces close looking and active, engaged decisions – and hopefully our choices will offer a glimpse of the photographic diversity available this year.

The slideshow below (in four sequential parts of roughly 20 galleries each) starts to the left from the entry and systematically works up and down the aisles. Images are captioned with linked gallery names, artists, prices, and further description/commentary as appropriate. 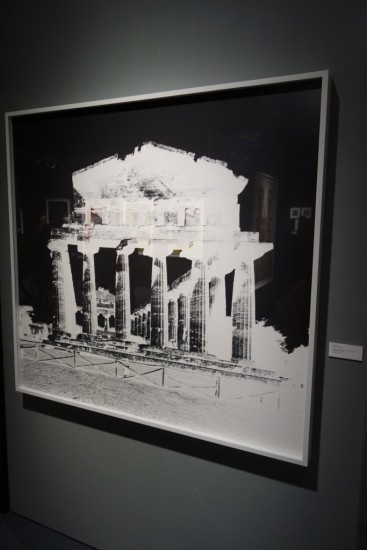 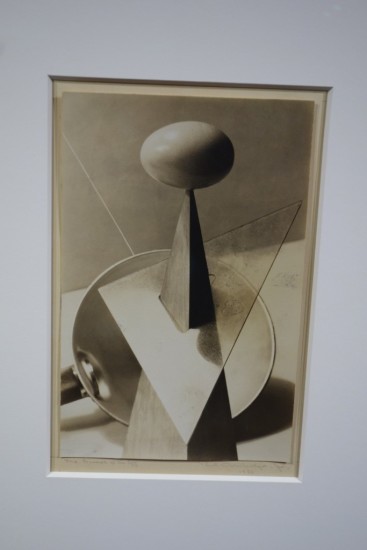 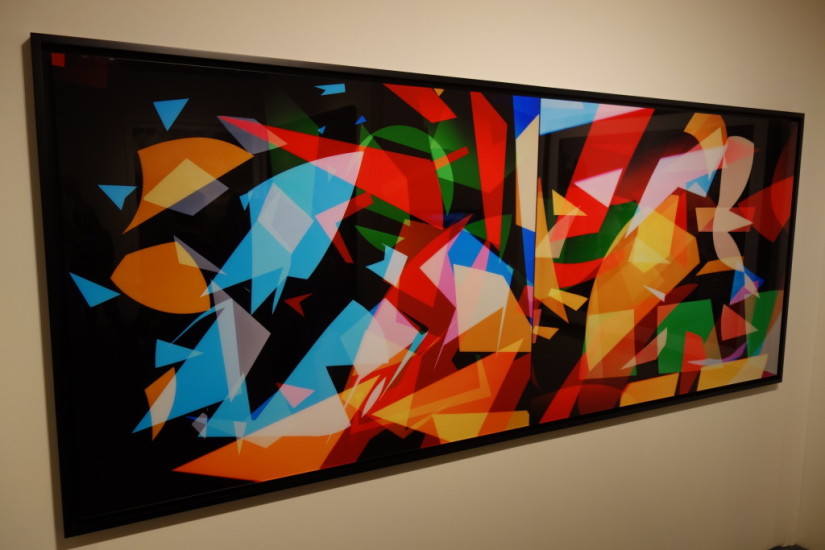 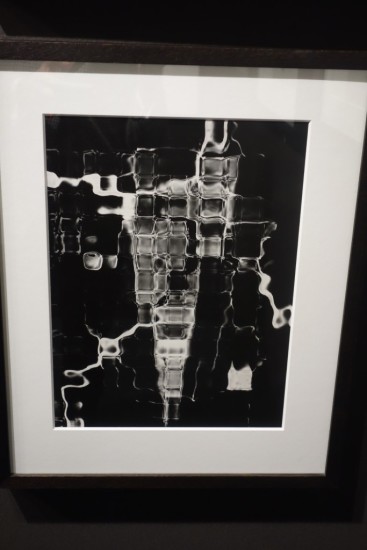 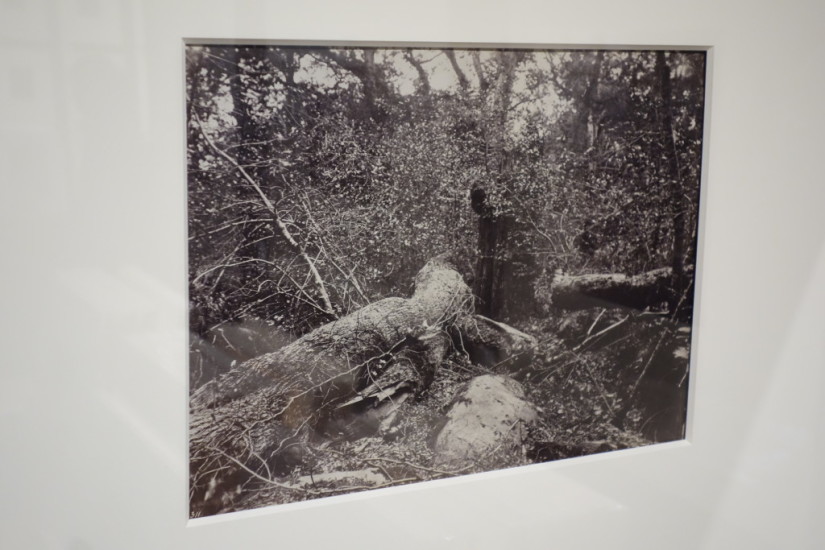 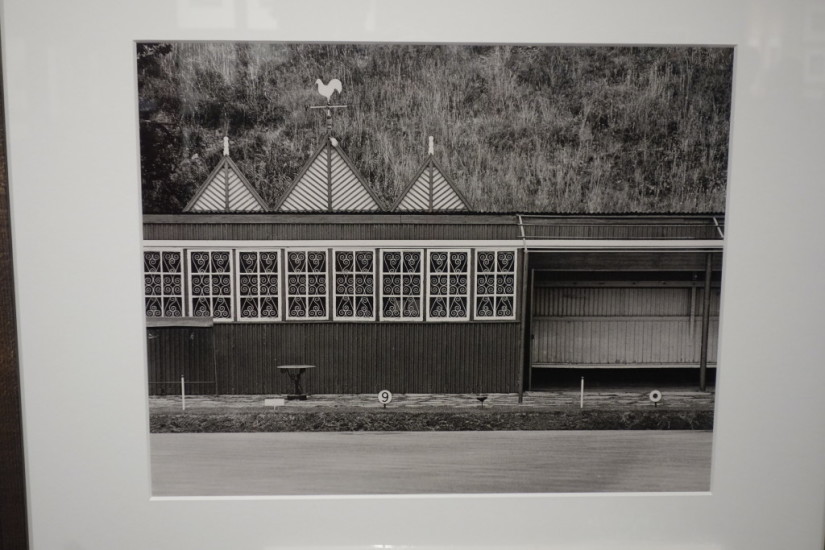 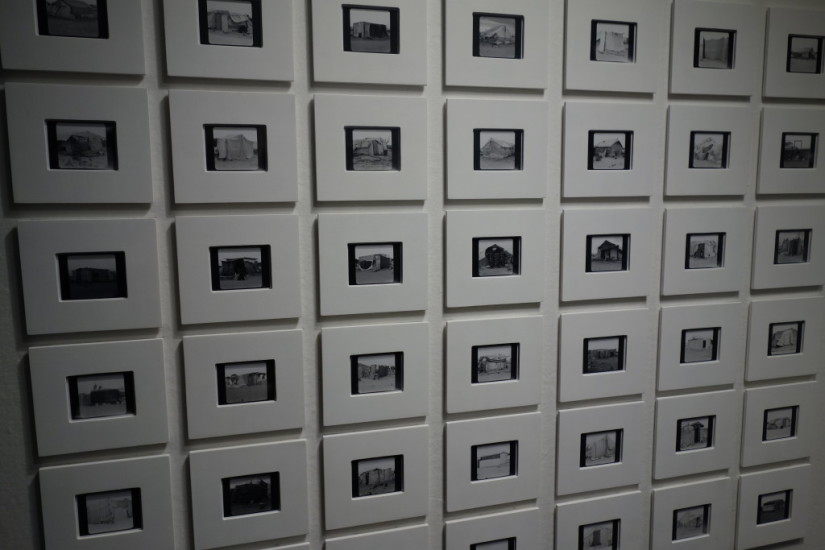 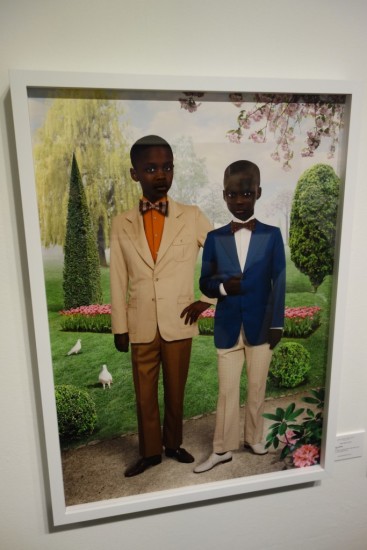 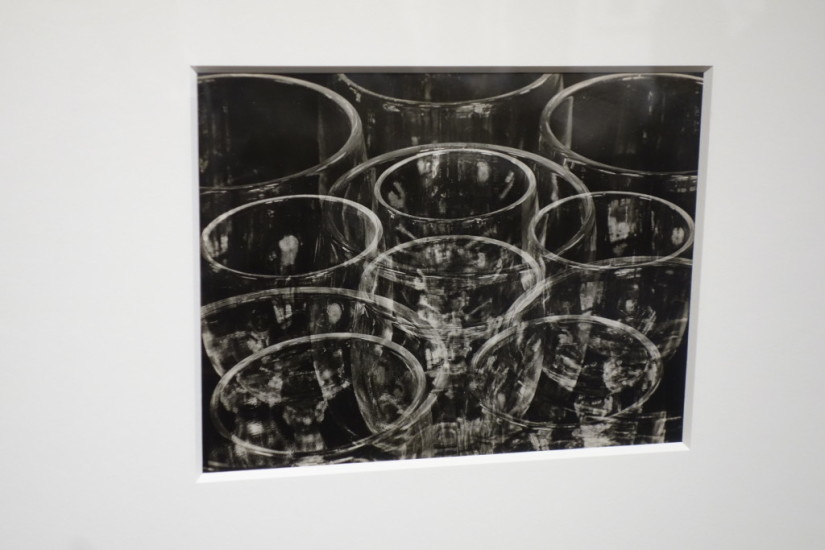 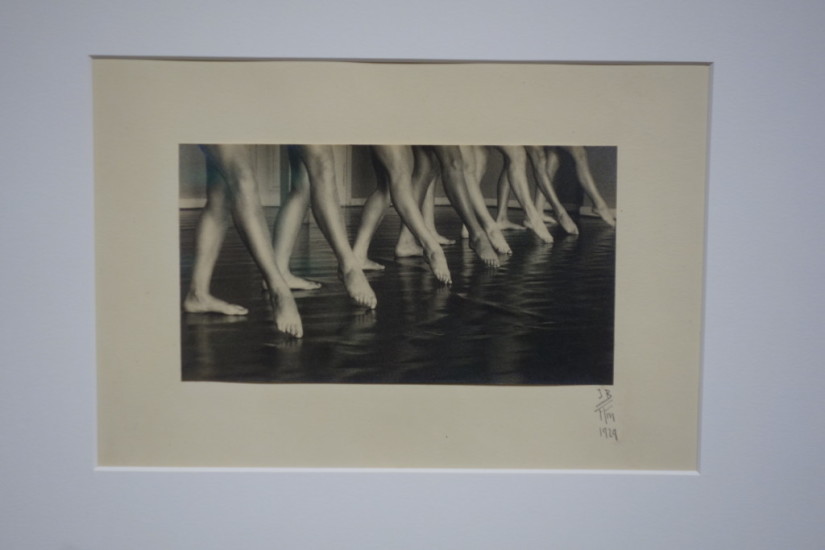 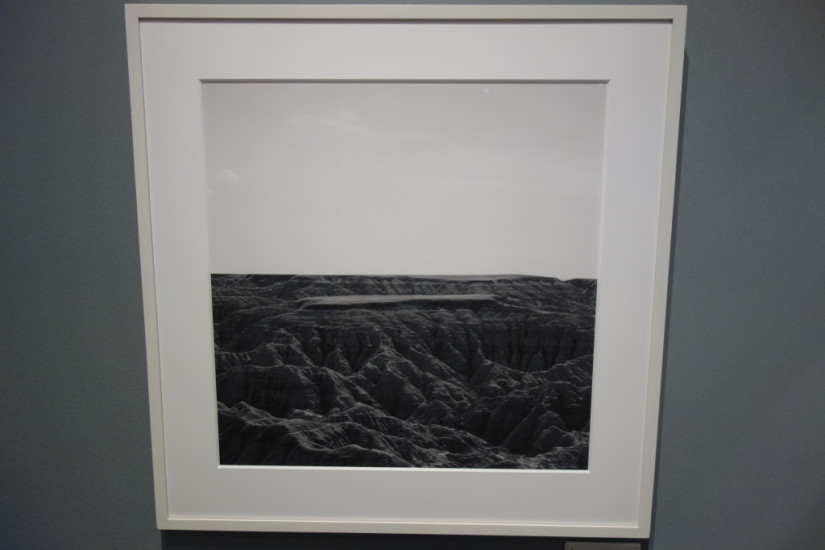 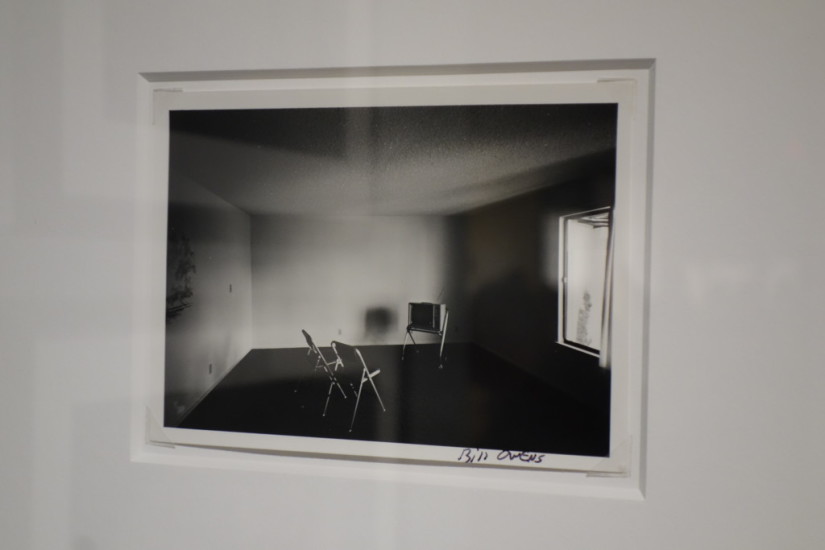 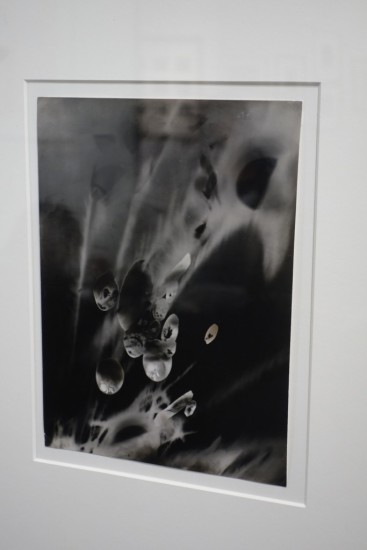 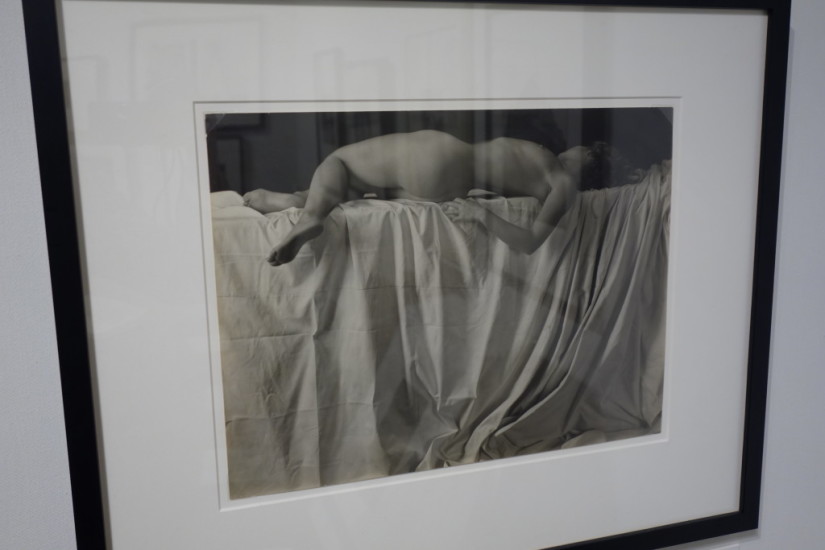 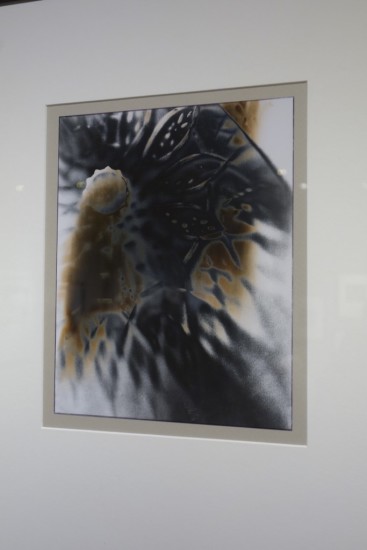 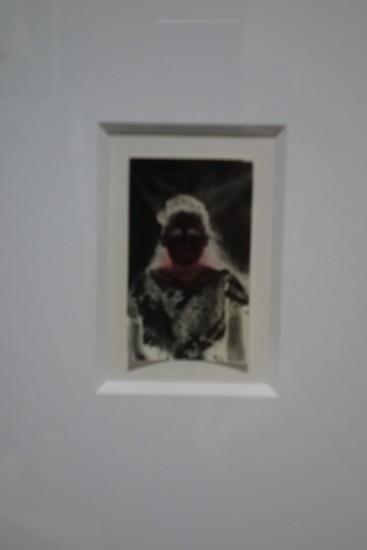 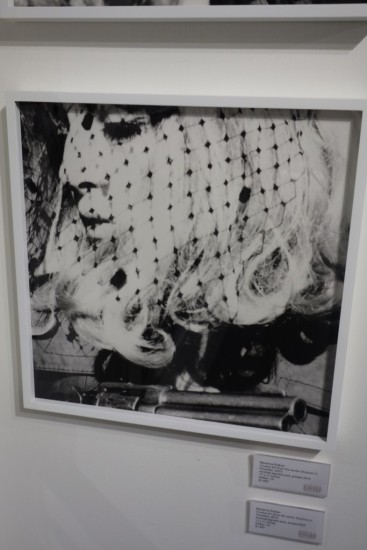 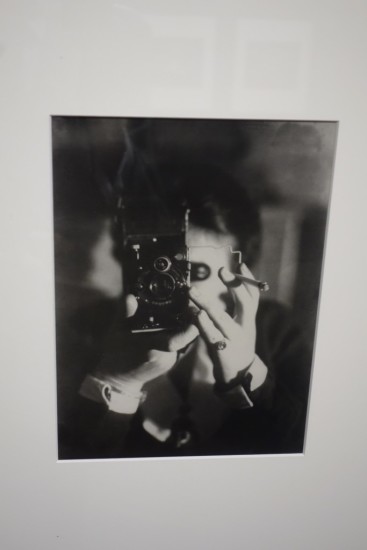 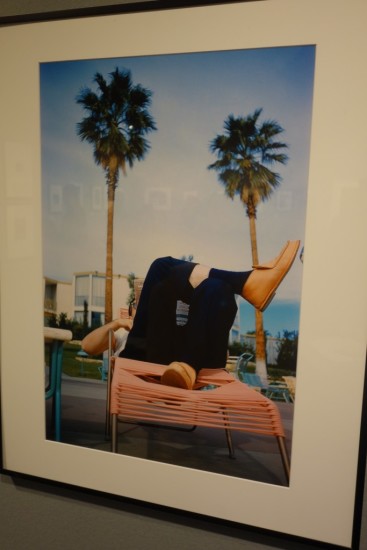 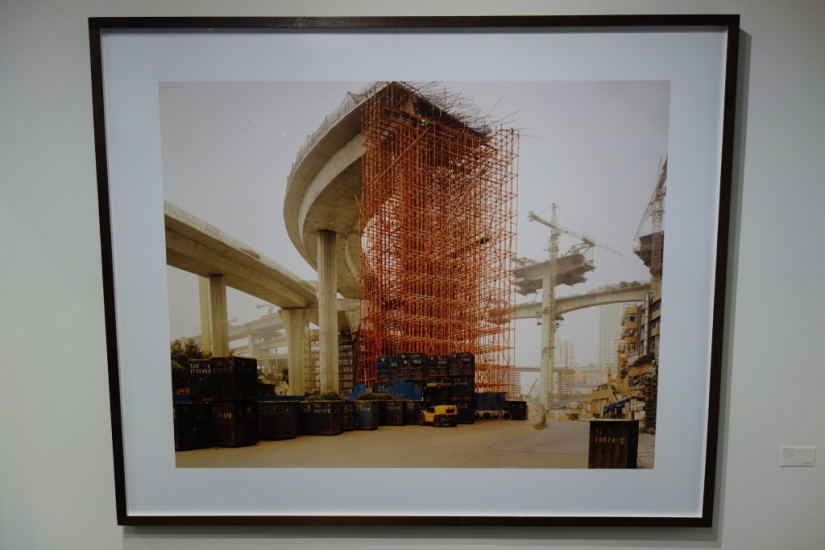 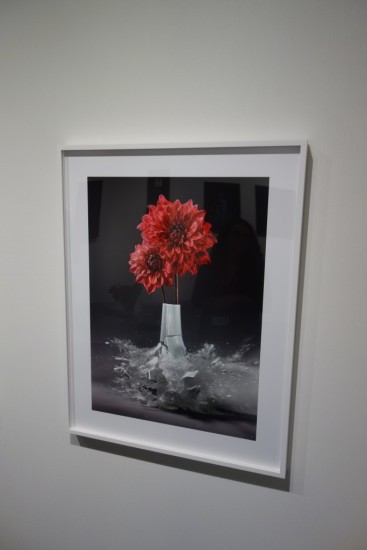 Weinstein Gallery (here): While most of the new Vera Lutter camera obscura works on view here were further studies of notable urban environments and famous buildings (the Brooklyn Bridge etc.), this image represents a thoughtful turn back toward antiquity. In reversed white on black, her Temple of Athena in Paestum (now Italy) recalls the ghostly physicality of many 19th century Grand Tour negatives. But the muscular monumental scale of her print gives it a presence entirely unlike those intimate, nose-to-the-frame rarities. It feels confident and authoritative, full of historical respect. Priced at $60000.

Bruce Silverstein (here): Paul Outerbridge’s 1932 The Triumph of the Egg has several interesting backstories. First, it seems to be a direct compositional response to Edward Steichen’s famous image of the same name, given their status as commercial competitors at that time. Second, it’s interestingly hand worked, from the dark retouched shadows to the drawn white line on the left. And lastly, the work appears to be one of Outerbridge’s last forays in black and white, as he moved to his saturated carbro prints soon afterward. All in, it’s a picture full of engaging angles, both geometrically and historically. Priced at $360000.

Bryce Wolkowitz Gallery (here): This vibrant color abstraction from Niko Luoma finds him bringing the very slightest hint of representation back into his recent compositions. Loosely based on the forms in Picasso’s Guernica, the polygons and shards of color tumble in a layered Cubist-like swirl. Priced at $25000.

Eric Franck Fine Art (here): It’s not entirely clear how Heinz Hajek-Halke made this wavy late 1920s abstraction – it looks like chemicals on faceted glass. What’s more intriguing than the process is the way the resulting composition combines cubed regularity with wispy sinuous leaking, our vision interrupted and turned watery. Priced at $15000.

William L. Schaeffer Photographs (here): I think I’m finally starting to get my head around the landscape innovations of Eugene Cuvelier. There’s something entirely modern about the way he has seen this thicket – it’s not a traditional landscape subject in any way, but a textural, all-over design dominated by the fallen trunk in the center. His ideas about the nature of beauty are surprising and unexpected for the 19th century. Up close, this is a lovely print, full of shimmering detail and interest. Priced at $75000.

James Hyman Gallery (here): The contrasting patterns in this late 1960s image by David Goldblatt are so smart – the spiraled shutters, the vertical slats of the siding, the triangle roofs, the flat horizontal of the bowling green, even the fuzziness of the background grass – it’s a composition bursting with geometric control. Layer in the cultural component of this facility plopped down in the middle of a mining compound, and the separation of races that it implies, and you’ve got a powerfully resonant picture. Priced at $12000.

Galerie Les Filles du Calvaire (here): Samuel Gratacap’s typology of tents takes a closer look at making a life in a refugee camp (in this case, in Tunisia). The standard issue structures have been rebuilt and adapted, often with improvisational personalizations and improvements, from decorative patterned cloths to better supports. Shown with a detailed map of the locations of ethnic neighborhoods in the camp, it offers a nuanced picture of how people find and shape identity in even the most dire of circumstances. Priced at $17000 for the set of 42 Polaroids.

Jackson Fine Art (here): These dapper young boys from Ruud van Empel continue the artist’s exploration of surreal constructed environments. Standing in bowties and loafers, the boys are surrounded by perfect lushness, their background combining formal gardens, tulips in bloom, and white doves. The dissonance of the hyper-perfection gives the picture some spark. Priced at $25000.

Weston Gallery (here): This Tina Modotti still life from 1924 takes classic Modernism and gives it some additional experimental life. Layers of glassware overlap and interact, creating reflected patterns and round edges that double and confuse. Priced at $95000.

Joel Soroka Gallery (here): With a young ballerina in my house, I am perhaps more partial to dance imagery than most fairgoers. But this early Ilse Bing ballet school image from 1929 revels in the forms of Modernism. The pointed toes create an elegant criss-cross pattern, the shiny floor and burnished legs giving the whole scene a dose of quiet warmth. Priced at $40000.

Robert Mann Gallery (here): Joe Deal’s bisected landscapes from his West and West series are underappreciated. This one cleverly collapses the rocky washes and mesas of the Badlands into a two-toned exercise in extreme flatness. Priced at $12000.

PDNB Gallery (here): Bill Owens’ 1973 suburban scene of two folding chairs and a TV on a cart in an otherwise gloomy room perfectly captures a certain kind of soulless living. Shadows creep in, regardless of the brightness outside, filling the emptiness of the space with stinging melancholy that doubles as black humor. Priced at $4500.

Gallery 19/21 (here): This Maurice Tabard photogram is a technical marvel. With a wispy backdrop of tumbling washes, large droplets cluster and bounce, each one with strange reflections and refractions inside. This is the kind of picture you could hang on your wall for a lifetime and never figure out. Priced at $20000.

Paul M. Hertzmann Inc. (here): Just look at that gorgeous drapery. Sure, this is a lovely reclining nude, made by Emmanuel Sougez in the early 1930s. But it’s the wildly unbalanced composition, with the nude pushed high and the drapery given space to breathe and expand (like it was carved in marble), that makes this image durably intriguing. Priced at $18000.

Barry Singer Gallery (here): This two-toned 1970s solarization by Edmund Teske shimmers with motion. The mix of brown and grey slides across the crystal faceting like a slow burn. Priced at $4000.

Rolf Art (here): This booth was a solo show of the work of Peruvian photographer Milagros de la Torre. In her Under the Black Sun project, tiny ID card negative portraits have been altered by red Mercurochrome (fooling my camera into blurring the image, sorry), lightening the skin of the sitter when printed normally. The images provide a thoughtful conceptual comment on racial bias and societal patterns of self image. Priced at $7500.

Charles Schwartz (here): Even though the camera blocks her face, this self portrait by Germaine Krull is rich with attitude. That hanging cigarette tells the whole story, acting like a stand in for a confident edge of casual coolness. Priced at $4000.

Deborah Bell Photographs (here): This is one of the weirder Hans Bellmer poupées I’ve encountered. The body parts are especially bulbous and misshapen, the creepy blank-eyed face hides in the background wearing an enormous bow, and the woven wicker chair (or bed) casts a patterned shadow. Less surreally abstract than others I’ve seen, but all the more subtly unsettling. Priced at $90000.

Hyperion Press (here): I had no idea Robert Doisneau had made photographs in color until I saw this series from 1960. Made in Palm Springs, they bring his wry eye for humor to the land of pastel sunshine. In this particular work, the lazy deck chair pose contrasts tightly with the “still in trouble” book being read. Posthumous prints, priced at $9800.

Flowers Gallery (here): Scale is everything in these Chinese infrastructure images by Nadav Kander. While the massive scaffolding dominates the composition, it’s the soft layers of hazy overpasses and construction cranes that give this image its energy. Curves and columns seem to go in all directions at once. Priced at $11500.

Foley Gallery (here): Martin Klimas returns to his exploding vase motif in this work, reprising an approach he used once before. It’s a brash undermining of a classic still life genre, bringing frenetic chaotic energy to images known for their carefully composed stillness. Priced at $3200.

Continue to Part 2 of this summary report here. Parts 3 and 4 can be found here and here respectively.