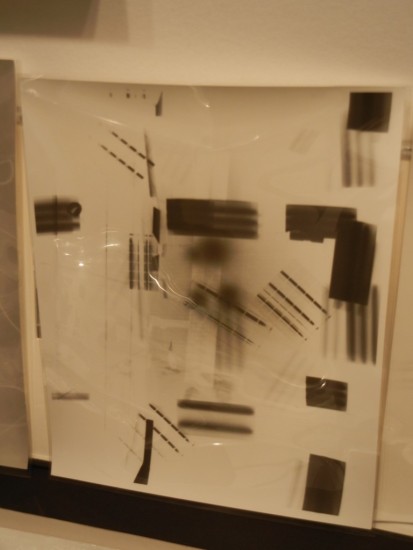 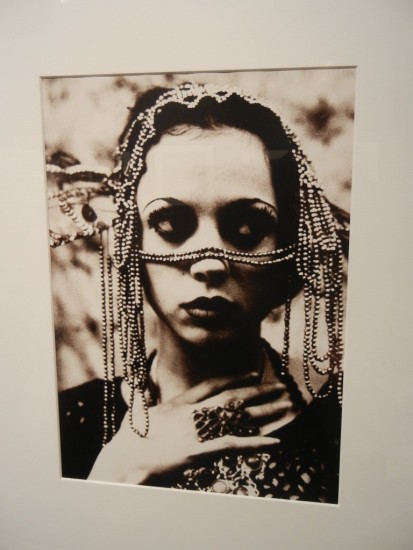 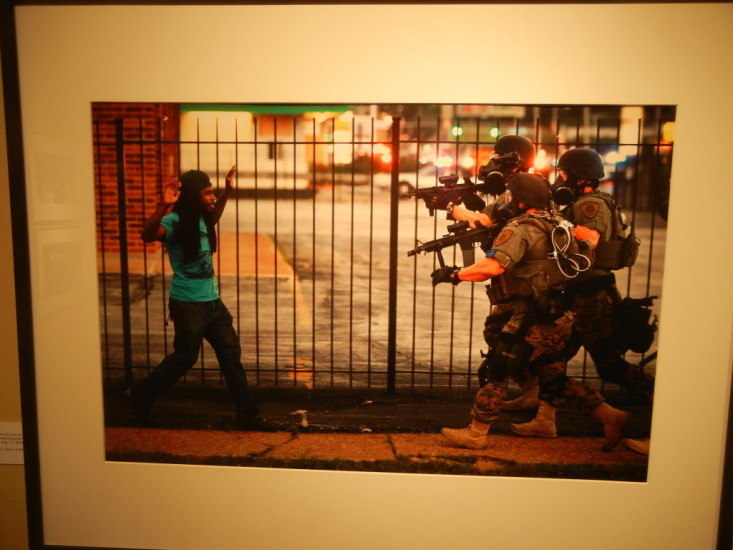 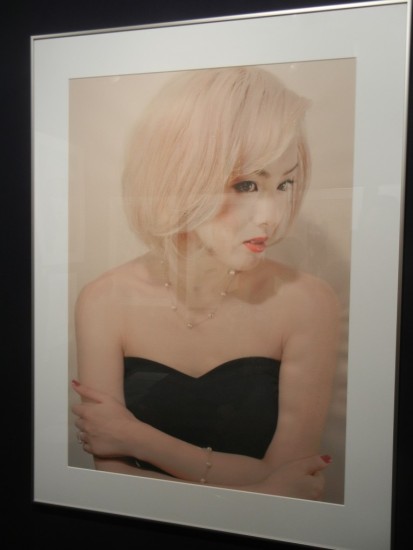 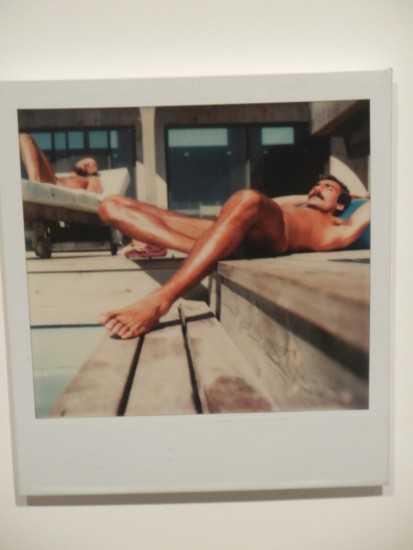 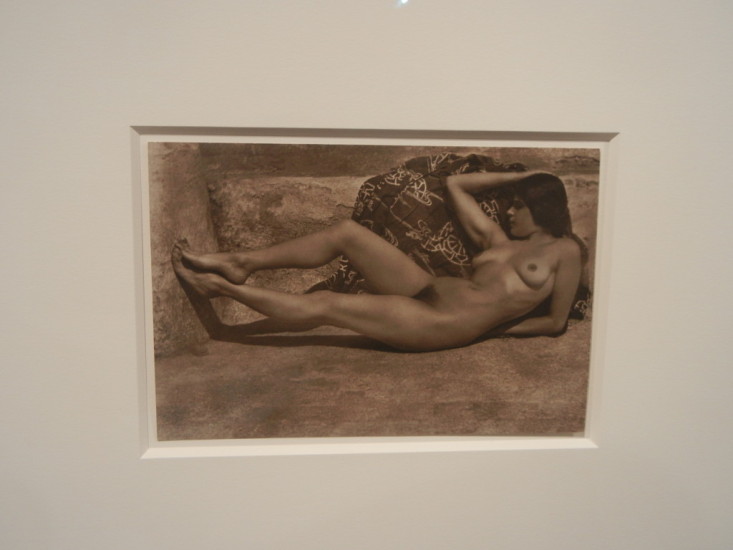 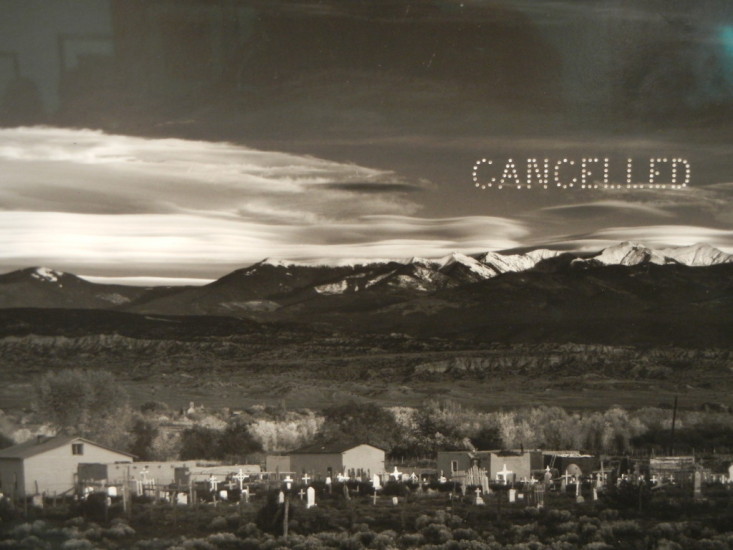 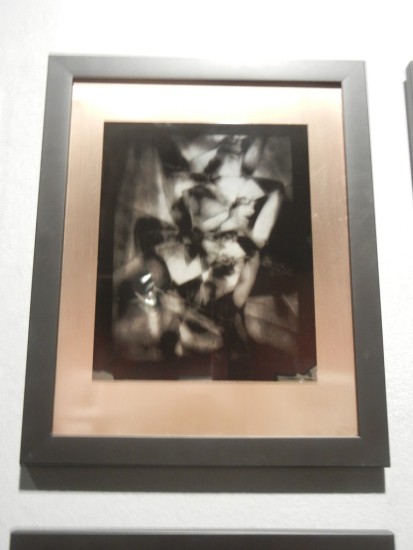 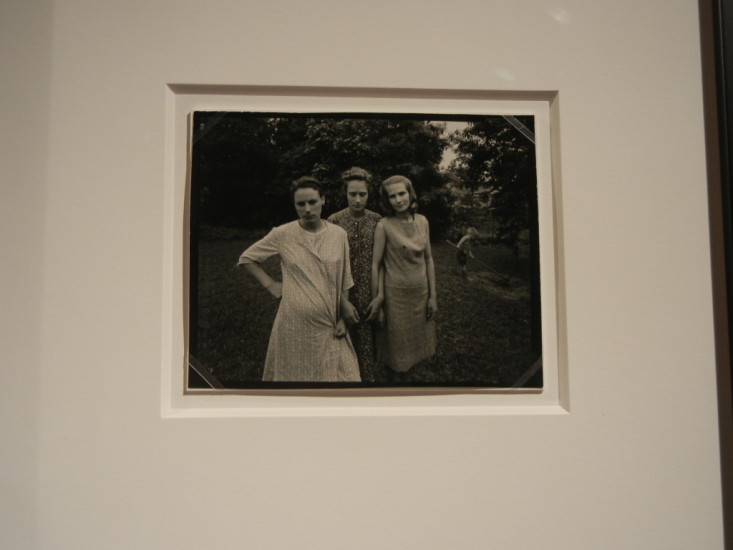 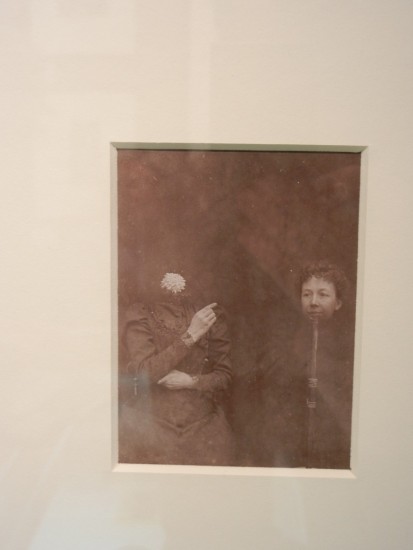 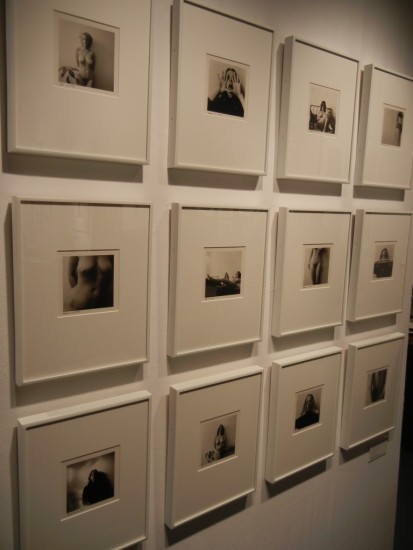 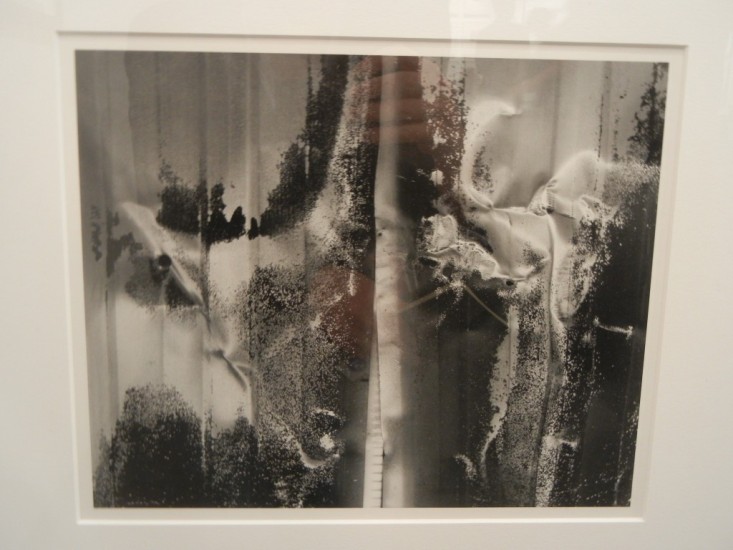 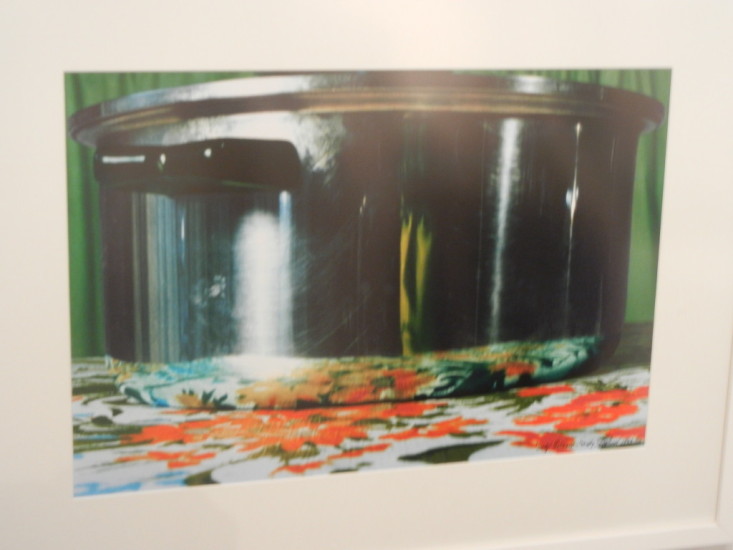 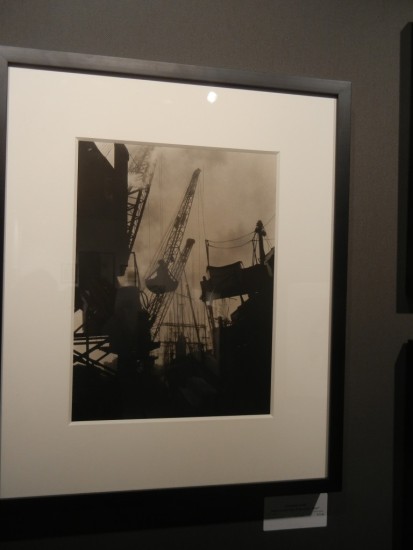 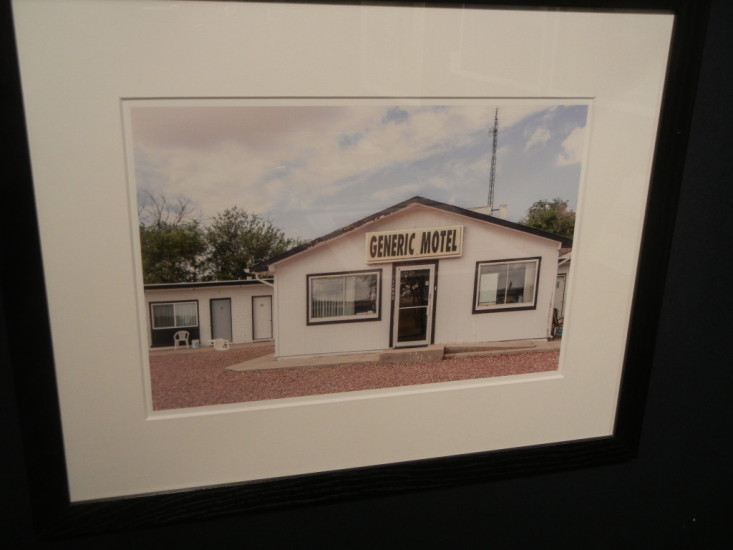 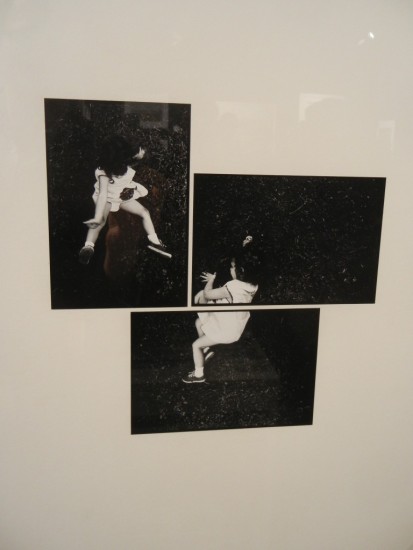 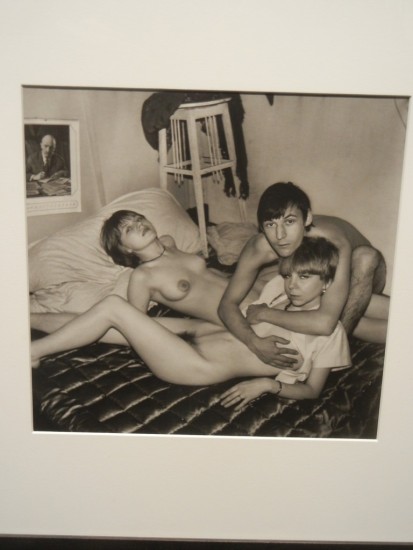 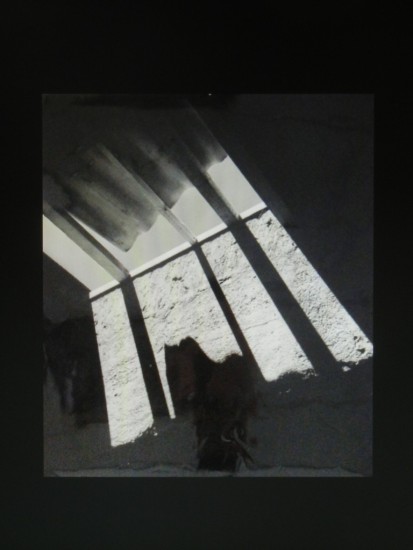 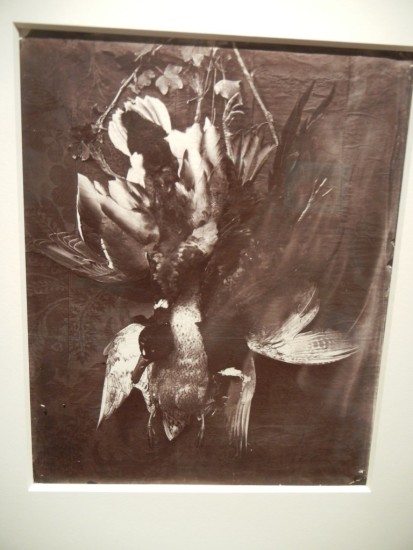 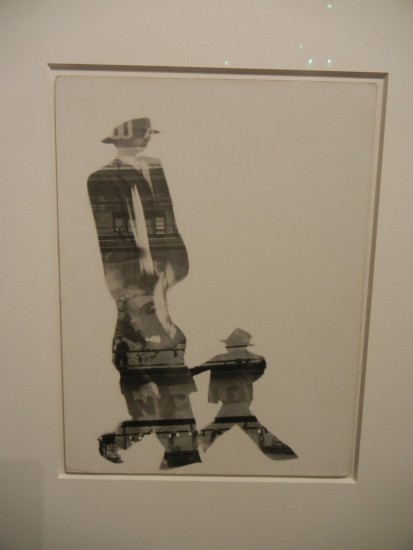 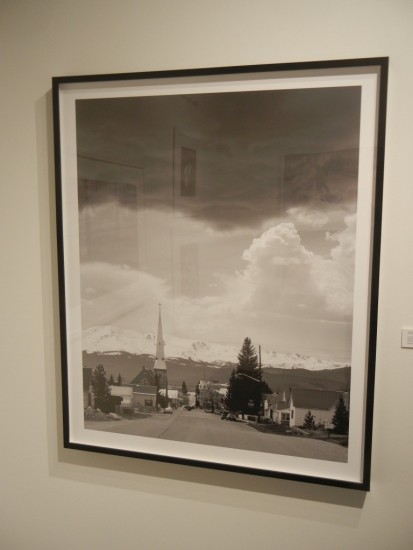 Rick Wester Fine Art, Inc. (here): This overlapped, ghostly abstraction was actually made using a pinhole camera in a box, which was sent through the mail as a regular package, capturing the chance brightness of fluorescent lights and windows along the way. Yola Monakhov Stockton, priced at $4000.

Monroe Gallery of Photography (here): Classics of photojournalism often quickly jump into the realm of fine art, and this recent image by Whitney Curtis from the Ferguson protests is memorably symbolic. It’s a modern version of Goya, with the compositional opposition of the hands up and the over-the-top riot gear. Priced at $2500.

Picture Photo Space, Inc. (here): This booth was a solo show of the work of Ayano Sudo, bringing a sparkling cosplay approach to female identity exploration. Here she takes on the role of the art dealer’s wife, decorative but bored. Priced at $3000.

Fahey/Klein Gallery (here): From Tom Bianchi’s series of Polaroids from the Fire Island Pines, tanned bodies at the pool become a complex mixture of the interlocked angles of legs and the straight lines of the deck boards. Priced at $8000.

Gitterman Gallery (here): While nearly all of Edward Weston’s nudes of Tina Modotti are justifiably well known, this variant image from the on the azotea/kimono sittings is an unusual find. In tactile platinum, from 1924, priced at $200000.

Scott Nichols Gallery (here): What do you do if you’re Ansel Adams and you print a bunch of Moonrises on defective paper? The answer is that you get a check-cancelling machine from the bank and punch holes in them, inadvertently creating iconic artifacts. Shown as a series of 12 cancelled images, priced at $180000.

VERVE Gallery of Photography (here): When contemporary photographers use an antique process, there seems to be a powerful temptation to make images that look similarly antique. Josephine Sacabo’s recent tintypes don’t do that, much to their benefit; she adapts the process to her own artistic interests. This one combines multiple images into a shifting, fragmented whole, totally unlike a hold-in-your-hand memento. Priced at $3500.

Etherton Gallery (here): Small 4×5 contact prints by Emmet Gowin, printed in the early 1970s. Their smallness pulls the viewer inward, toward a more intimate exchange of stories. Priced at $8000.

Bernard Quaritch Ltd. (here): Victorian trick photography, where the head has been exchanged for a flower. An album by an unknown maker, priced at $5600.

Joseph Bellows Gallery (here): In 1972/1973, Melissa Shook embarked on a project to make a self-portrait (often a nude) every day. Her pictures feel informed both by photoconceptualism and by an investigation of female identity (before Francesca Woodman got there). Individually priced at $6000 each, likely best in groups/grids.

Paul M. Hertzmann Inc. (here):The Princeton Museum of Art is quietly deaccessioning duplicates from its Minor White archives, and so some prints that have rarely been available are now slowly coming to market. This late image from the 1970s was new to me, a satisfyingly evocative composition of dented tin and spray paint. Priced at $8500.

Paci Contemporary (here): This 1977 portfolio of images taken in a mobile home captures Sandy Skoglund before she was a surreal scene setter. While the dated orange table cloth is eye catching, it’s the distorted face in the stainless steel pot that is so inventive. Priced at $4000 each.

Contemporary Works/Vintage Works (here): Harbor masts and towering cranes jumbled together with the bustle of industry. Germaine Krull, from 1925/1926 (and her iconic book Metal), POR.

Stephen Bulger Gallery (here): A young girl fallen in the grass, collaged into a time shifting multiple portrait. Dave Heath, from the mid 1960s. (Somehow I didn’t get a price.)

Edwynn Houk Gallery (here): I spent quite a bit of time with gallery director Julie Castellano trying to puzzle out how Louis Faurer made this fascinating 1946 image. Between the multiple exposures and the masking to create the sharp edged forms, it’s a perplexing urban composite. (Apparently there is a variant of this image in the collection of the Milwaukee Art Museum, where more of the underlying building is shown, with perhaps more clues to what steps occurred in what order.) Priced at $55000.

Weinstein Gallery (here): While I should have noticed this image when I reviewed the LBM Dispatch from Colorado (here), I didn’t really look at it carefully until I saw it in this booth. Then it was like a thunderbolt – look at that striped layering of tonality, from dark cloud, to middle grey, to light grey, to off white, to snow white, and back again until we reach the pavement, with the white church spire and the dark evergreen as offsetting vertical poles. So, so compositionally smart, and so easily overlooked. Alec Soth, priced at $19000.

JTF (just the facts): A total of 9 large scale color photographs, framed in white and unmatted, and hung against white walls in the main gallery space. All of the ... Read on.