While it is certainly possible to jump into the middle of our Paris Photo 2016 summary reports and find your way directly to your favorite galleries, starting at the beginning and working through the booths systematically may make the most sense. Part 1 of our report can be found here, and along with one group of booth reports (the center section), it includes some general background on the fair and the outline of the slideshow format.

This Part 2 of the report covers the section immediately to the left of the central section, as seen from the main entrance. It might also be called the “middle left”. 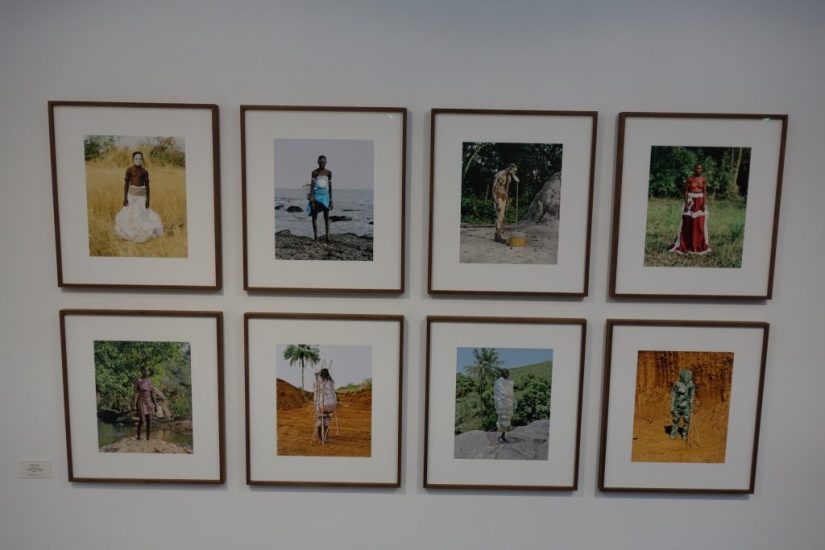 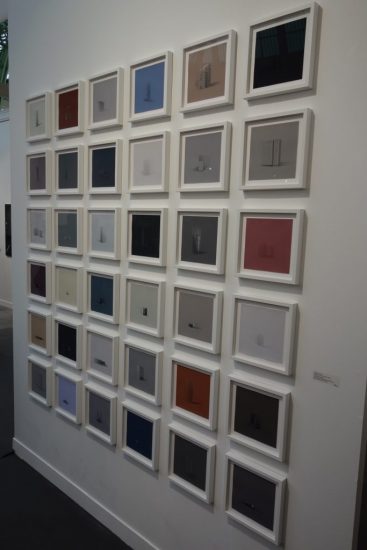 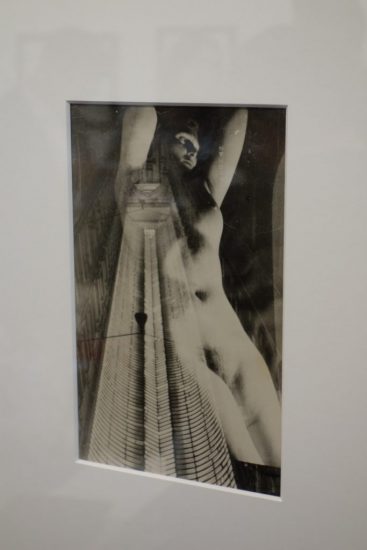 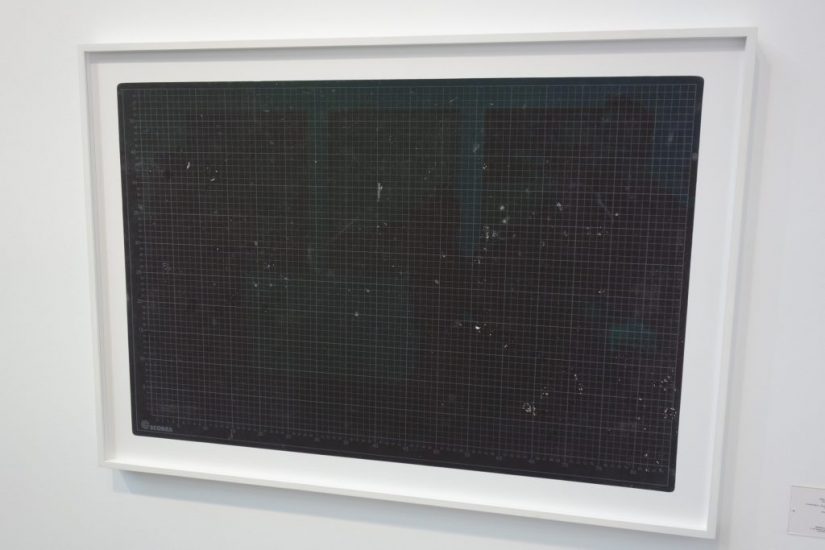 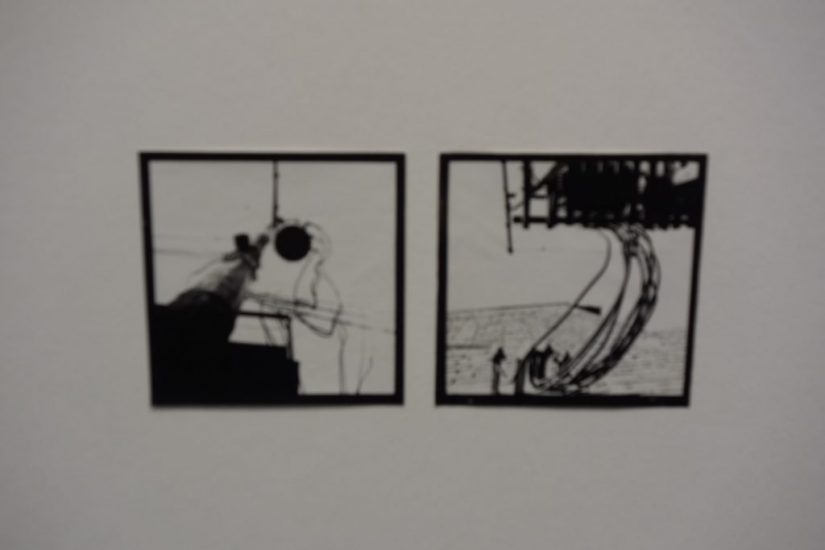 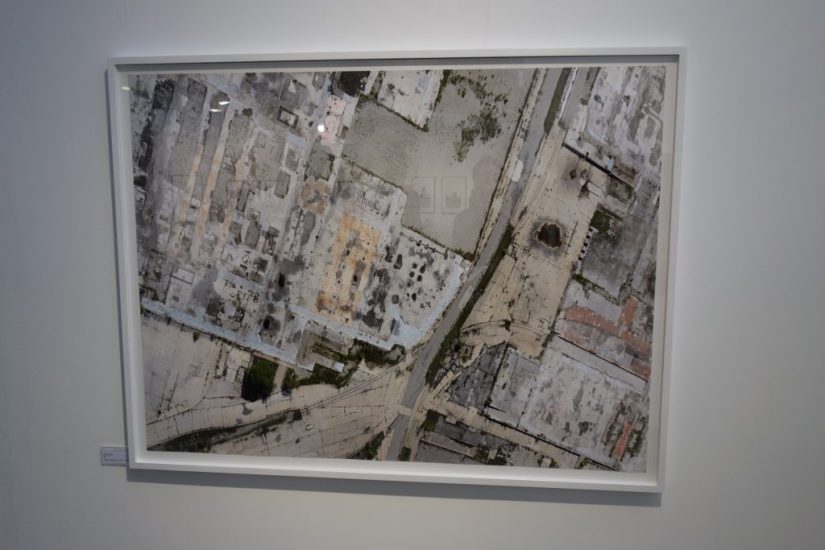 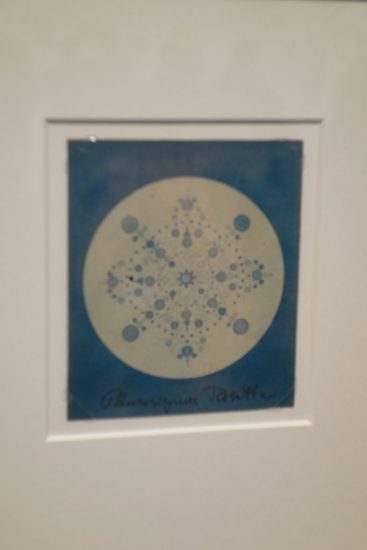 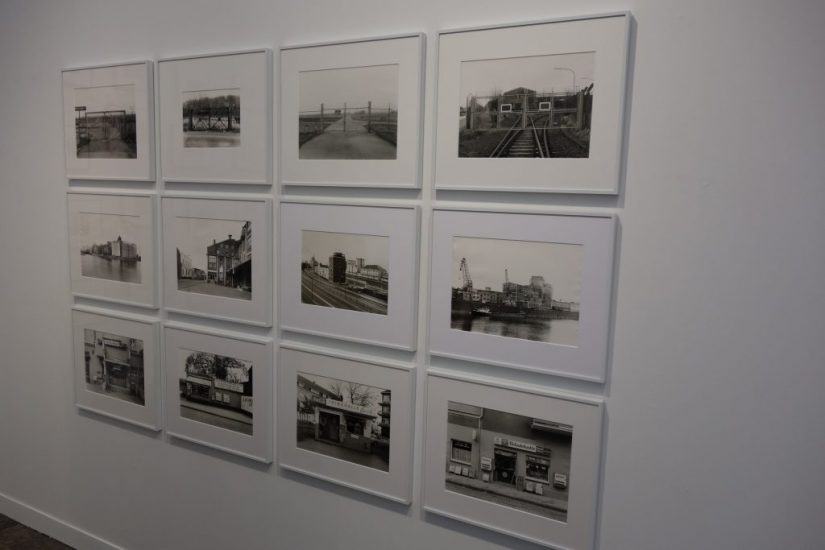 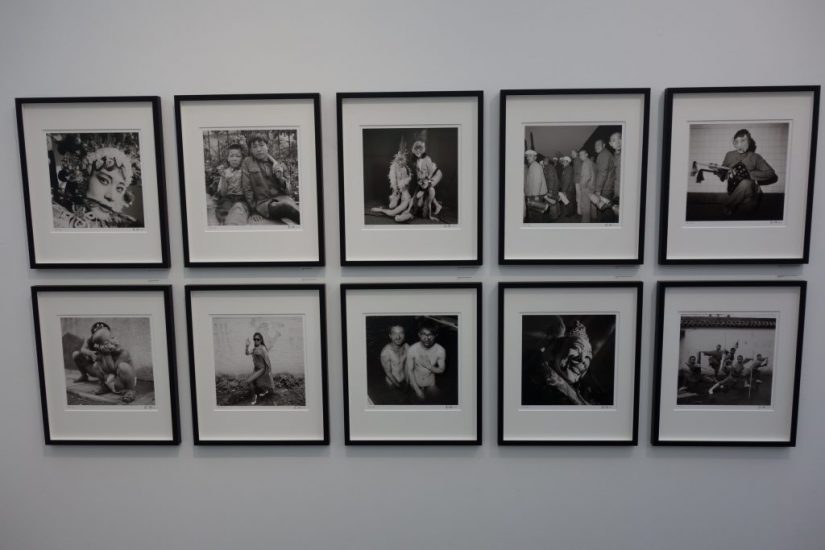 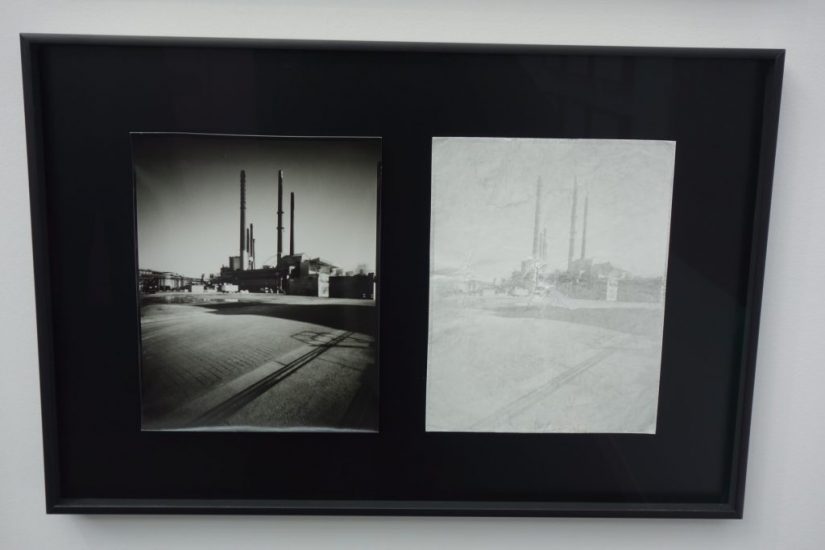 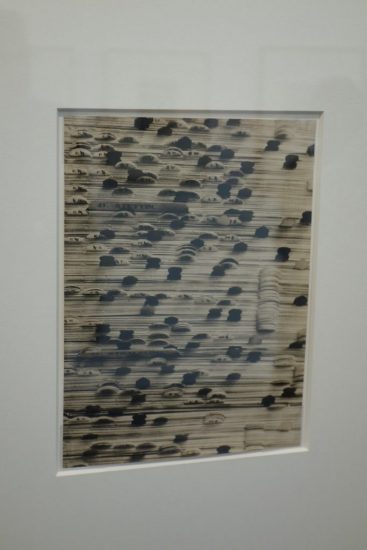 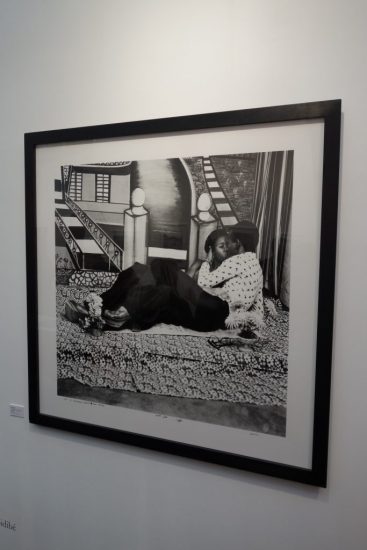 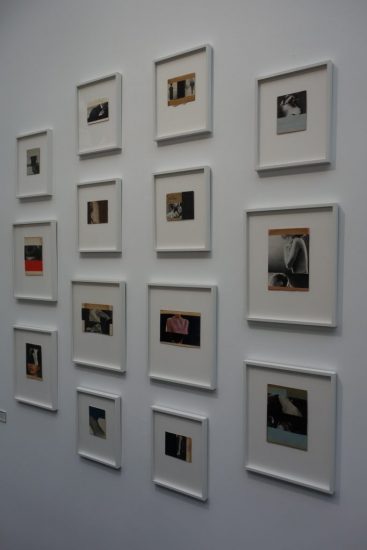 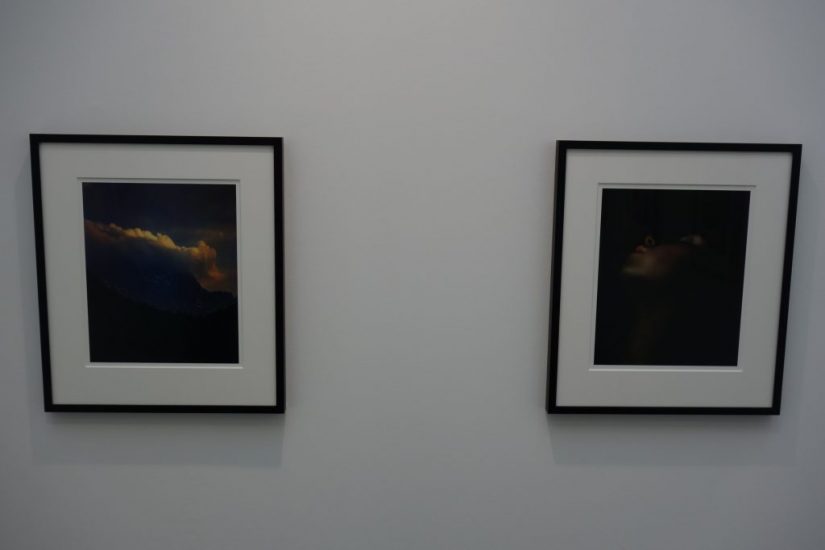 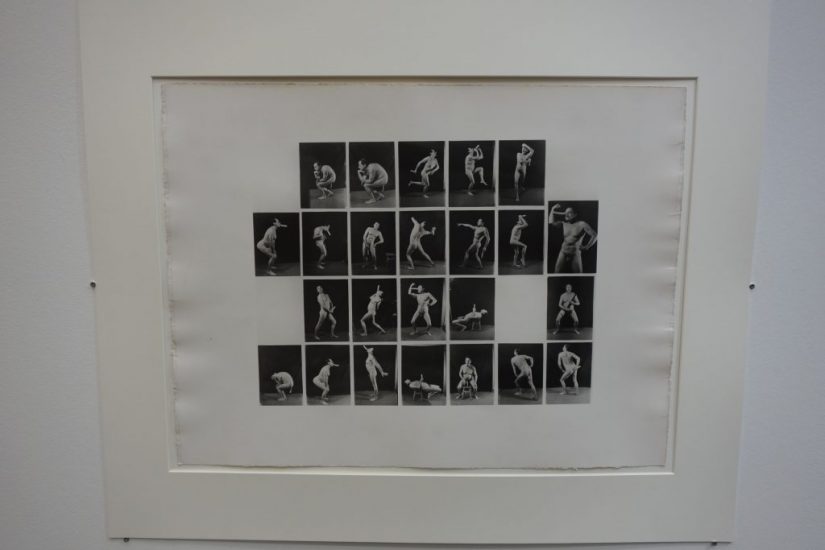 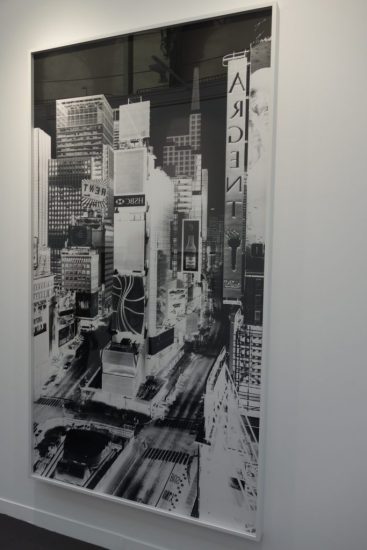 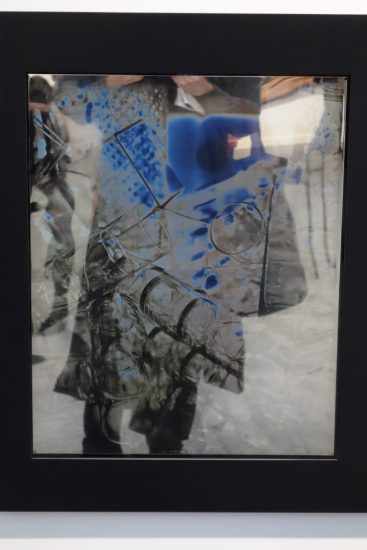 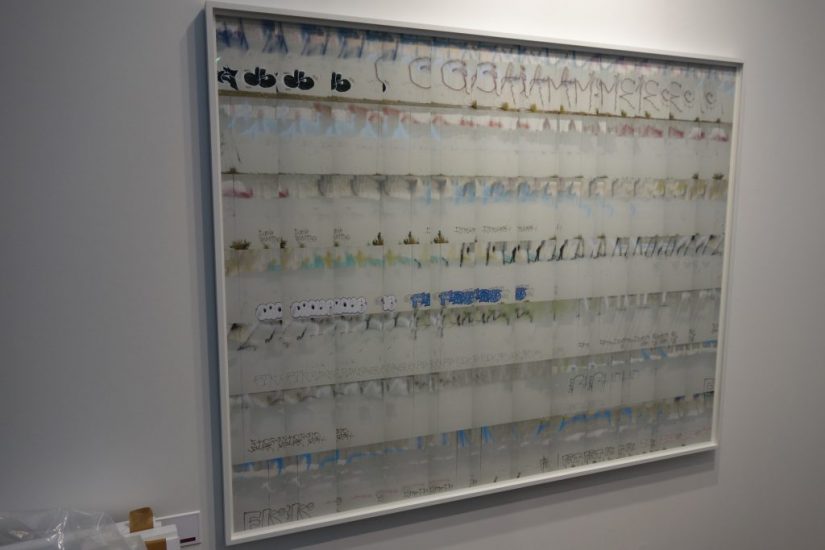 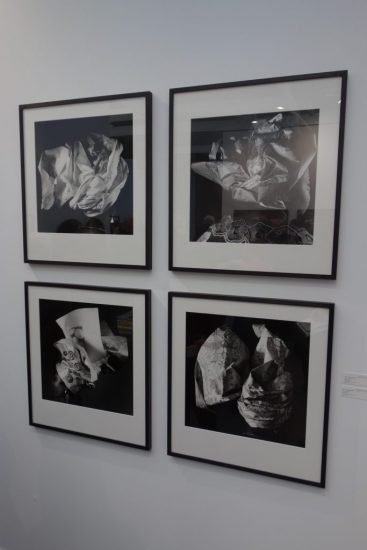 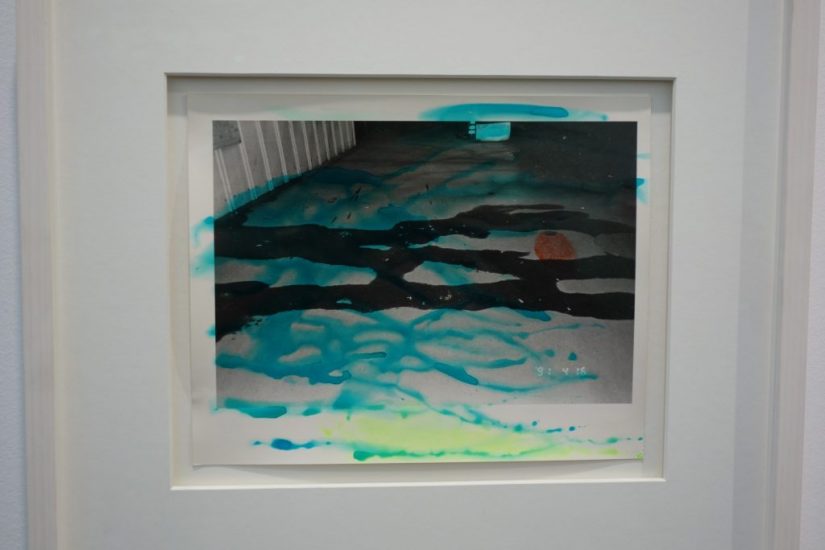 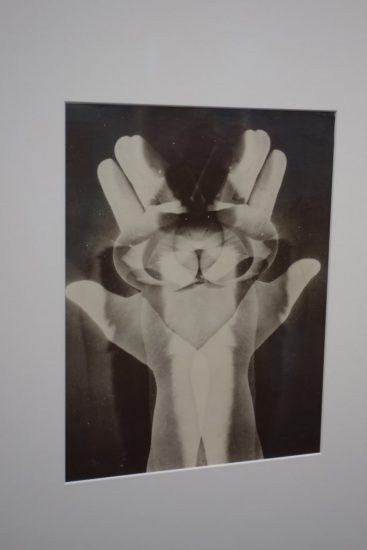 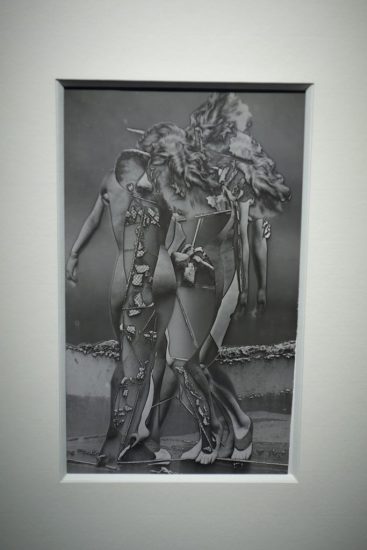 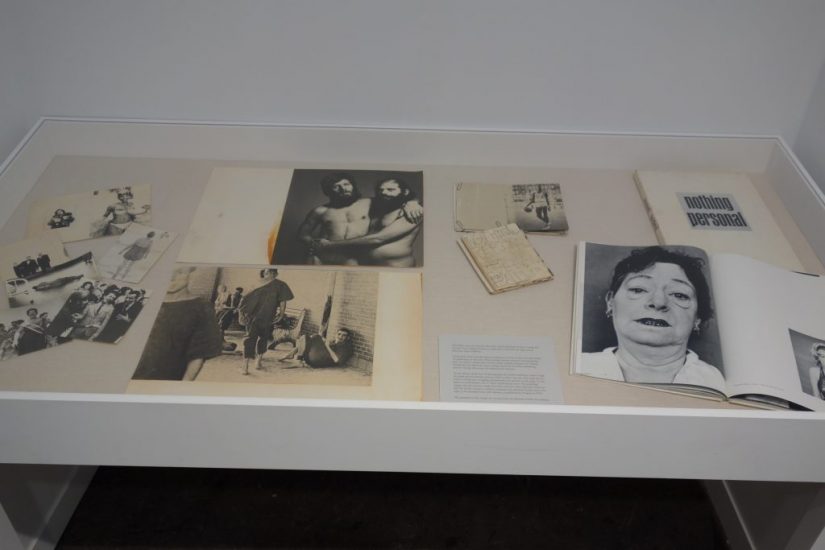 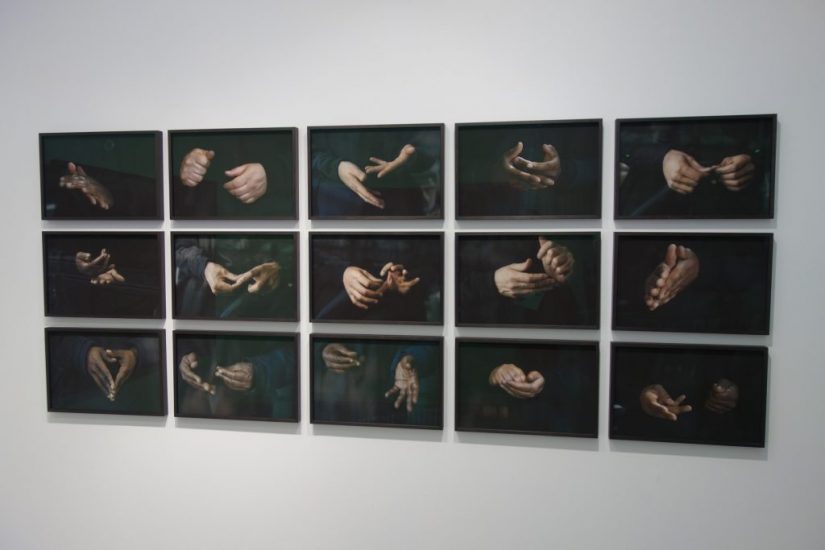 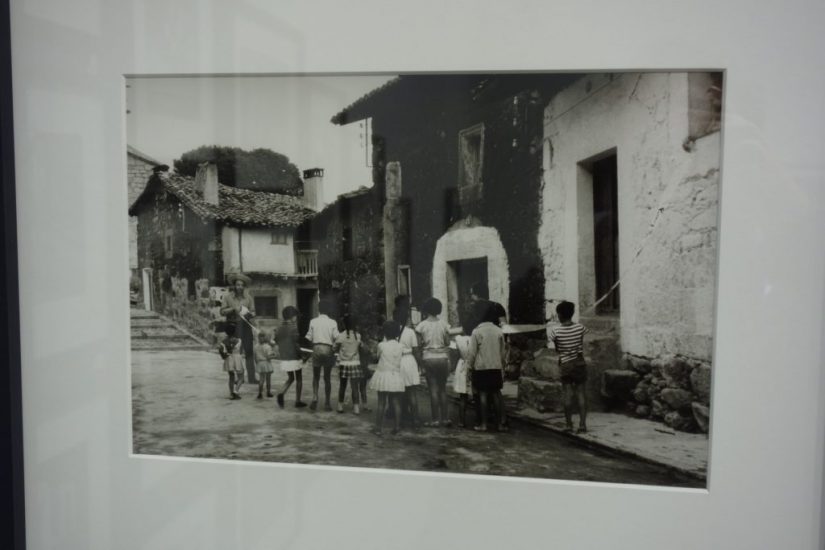 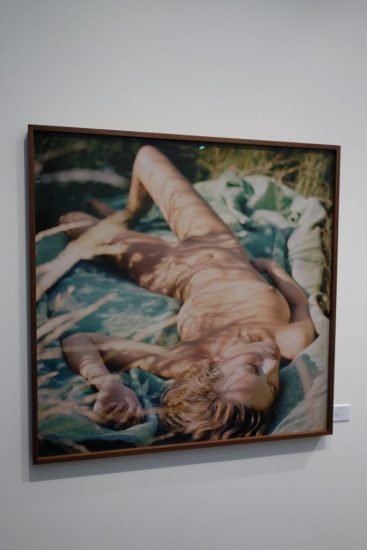 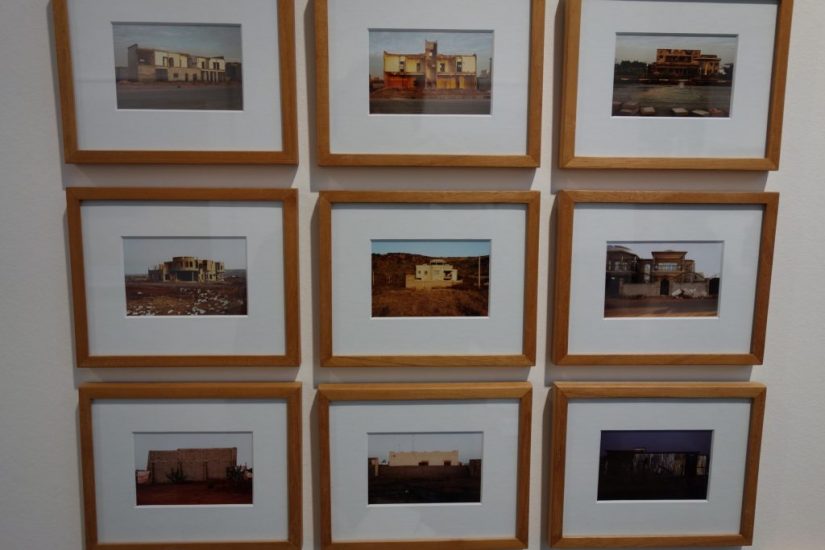 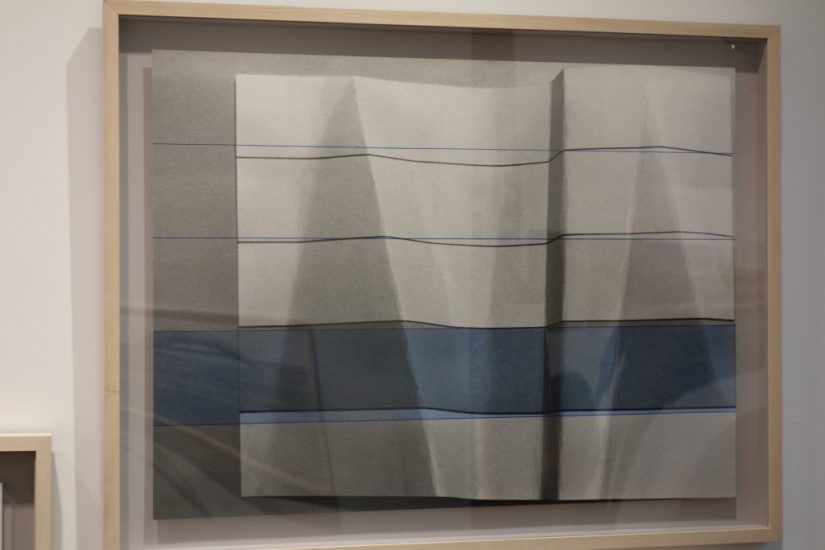 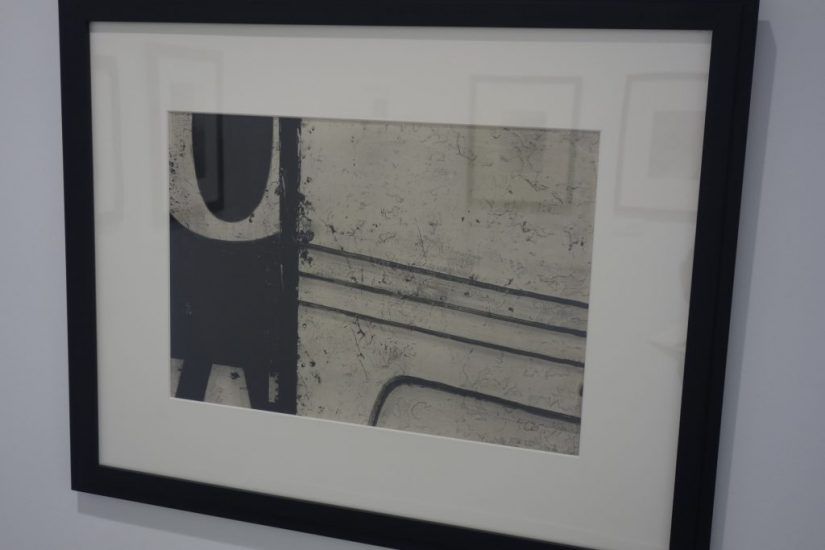 In Camera Galerie (here): Namsa Leuba’s combination Swiss/Guinean heritage provides the starting point for these uneasy photographs. In each case, she has recreated a Guinean statue, the kind found in most villages and used to bring luck or fertility or cast out demons. Her human-inhabited constructions, often made with sticks, rope, fabrics of different kinds/uses, and body paint, are both elemental and otherworldly. Priced at €3000 each.

Galerie Binome (here): Thibault Brunet’s typology of suburban French buildings softens the hard edges of the faceless architecture and roots us in the dominant color of each appropriated image. The result is an array of muted color blocks, each structure disappearing into emptiness. Priced at €20000 for the set of 36 prints.

Atlas Gallery (here): This 1925 image by Franz Roh offers a classic Surrealist combination – a female nude placed on top of the inverted glass ceiling of an arcade, bringing man made and natural into direct interaction. Priced at €14500.

Galerie Laurent Godin (here): Philippe Gronon’s deadpan look at an artist’s gridded cutting mat is a study in residue and texture. Its surface is dotted with small marks, dents, and dots, almost like a chart of the stars. Priced at €9000.

Toluca Fine Art (here): Sadly, this image of Jorge Ortiz’s 1977 diptych of dangling cables isn’t as clear as it should be, but its high contrast black and white forms still stand out. Seen from underneath, the gestural wires swoop and sway from poles to fire escapes. Priced at €3500.

Galerie Melanie Rio (here): Philippe Chancel’s aerial view of Flint, MI, is dystopian in its skewed, scarred emptiness. The community has been reduced to a pock-marked surface, the cracks and stains the only reminders of what once was. Priced at €9000.

Galerie Thomas Zander (here): Tata Ronkholz is perhaps less well known than some of her more famous Dusseldorf school classmates, but these works from the 1970s/1980s show the common affinity for rigor we associate with the students of the Bechers. Three sets of images have been drawn together here (gates, industrial scenes, and trinkhalles), each seen with crisp precision and unflinching clarity. Priced at €69000 for the set of 12 prints.

Blindspot Gallery (here): For collectors and museums trying to get their heads around contemporary Chinese photography, the works of Liu Zheng offer an admirable starting point. His portraits take in the cultural sweep of the nation, from workers to traditional dancers, with an almost Sander-like interest in capturing types from a cross section of touch points. Modern prints, priced between €4600 and €5500 each.

Chelouche Gallery (here): Uri Gershuni’s diptychs of the imposing Henkel detergent factory in Dusseldorf bring together an image of the place and the results of its physical processes. Prints of the smokestacks and warehouses have literally been run through the laundry, becoming bleached and battered ghosts of themselves. Seen side by side, the pairs evoke echoes of racial cleansing/purity and other historical horrors using a modern conceptual approach. Priced at €4000.

Gilles Peyroulet (here): This up close still life of the dense spots of paper file tabs by Sasha Stone is a terrific example of Modernist vision. The black and white markers rise above a field of horizontals, highlighting the crispness and inherent geometric order of the things themselves. Priced at €20000.

Galerie du jour agnès b. (here): Malick Sidibé’s modern enlargements of his 1960s/1970s images have become almost too big to believe. This tender image would easily dominate a whole wall. Luckily, its funky youthful optimism (in the form of the dream house in the background) is thoroughly contagious. Priced at €15000.

Tolarno Galleries (here): These two prints come from a series of 1970s works by Bill Henson that was inspired by the poems of Friedrich Rückert and the music of Gustav Mahler. Following the stories of the death of children, Henson’s pictures retreat unto moody dreamlike longing, the landscapes and young faces dissolving into darkness. Priced at €12500 each.

Gagosian Gallery (here): Vera Lutter’s monumental camera obscura image of Times Square captures both the cacophony of the place and its essential power, without reducing it to a cliché. Its tonal and textual reversals upend our expectations, and the ghostly movement of its masses below has been reduced to silence. Priced at $85000.

Xippas (here): Daguerreotypes are notoriously hard to photograph, and as you can see from my awkwardly held black raincoat, I tried my best to create a usefully flat backdrop without much success. This is too bad because Jerry Spagnoli’s contemporary dag of a jumble of glassware is triumphantly well matched to the shimmery elusiveness of the process. Its mirrored reflections and refractions sparkle with photographic intelligence. Priced at €16000.

Magnin-A (here): While J.D. ‘Okhai Ojeikere might be best known for his typologies of elaborate African hairstyles, these images of headscarves are equally glorious in their exuberant creativity. Fabrics are twisted and stacked into towers of elegant origami-like drapery, where crisply starched corners meet sinuously controlled curves. Priced at €12000 each.

Michael Hoppen Gallery (here): This work by Masahisa Fukase pairs a fluid flow of darkness across the pavement with a similarly watery wash of paint across the surface. Its a composition of drips over drips, both subtly sinister and brightly expressive. Priced at €27000.

Pace/MacGill Gallery (here): Several of the nooks in this booth were populated with imagery from Richard Avedon’s 1964 collaboration with James Baldwin entitled Nothing Personal. While the images themselves are searingly powerful (particularly a smart juxtaposition of the Daughters of the American Revolution, the American Nazis, and a nude Allen Ginsberg), this vitrine of materials from the book maquette was particularly engaging. In it, we can see how Avedon went from original stats, to cropped layouts, to paper clipped pages, and ultimately onto the finished design. On loan from the Avedon foundation, and NFS.

Galerie RX (here): Anna Malagrida’s typology of hands of gamblers at the horse races is full of gestural humanity and invisible emotion. In these forms, we see hints of anxiety and elation, each image the tactile evidence of a private reaction. Priced at €2800 each or €25000 for the set of 15 prnts.

Del Infinito (here): This booth was dedicated to the early 1960s performances of Alberto Greco. While many images capture the artist printing and writing on various posters and signs, the most joyful are the ones that include village children and a long roll of paper, where the kids could join in and contribute their own markings. The pictures have an almost Pied Piper look, with Greco at the head of the parade. Priced at $5000 each.

Jackson Fine Art (here): Mona Kuhn’s newest nudes celebrate a kind of natural nudity, where men and women lounge around on tapestries and blankets, reading and relaxing amid the grassy surroundings. This one adds a layer of dappled light, making its gentle ease even more subdued. Priced at $14500.

Galerie Cécile Fakhoury (here): This booth was a solo show of the work of François-Xavier Gbré (whose work was recently on display at the Walther Collection in New York). These images document the architectural forms of Mali, with details and interiors mixed into broaden the picture. Hung salon style in small wood frames, this particular group centers on the rectangular forms of everyday structures, often seen in the warmth of the afternoon light. Priced at €400 each.

Yumiko Chiba Associates (here): This 1979 work by Kazuyo Kinoshita explores the conceptual power of layered rephotography. Folds are both physical and captured flat in the photograph, while tints and lines traverse the surface, upending our ability to perceive the differences. Priced at $8500.

Robert Mann Gallery (here): This large, vintage Aaron Siskind print hits on many of the factors that make the artist’s work so durably strong. In one composition, we see Siskind play with the tactile detail of painted surfaces, the cropped blockiness of letters, the balance of strict lines and geometries, and the bold contrasts of black and white. Priced at €60000.