As the photography world woke up to the news of an unexpected reality in the form of the stunning American election results, it was as if all the convivial effervesce that typically fills the air at Paris Photo had been suddenly and abruptly whooshed away. Of course, it is always wonderful to catch up with people we only see once a year in Paris, but the mood that descended on the Grand Palais for the opening day this year was somberly grim and unusually quiet – faces were drawn and serious, and friends from around the globe shook their heads in dumbfounded amazement and consoled each other as if at a funeral.

Coming on the heels of last year’s terrorist attack (that closed the fair several days early), sales minded gallery directors seemed resigned to the likelihood of another soft year. While the fair had literally just begun, in their minds, this newfound uncertainty would likely breed choices foregone and wallets held tight, even for many on an acquisition mission – no one seemed to be in much of a buying mood given the circumstances. For many, it seemed hard to stay focused on the joys of art when so many other potential demons seemed to be floating around and taking shape. Which returned nearly every conversation back to the “what happens next?” line of discussion, with the undertones of fear and dismay lingering in unspoken glances and shared words of encouragement.

More than once, my conversations ended with a shared faith in the art itself – that maybe by allowing ourselves to focus our attention on some great photographs, we could for just a moment find some respite and distraction from the weightier concerns of the day. But I will admit that I had a sense of going though the motions in my first trip down the hallways, of dutifully looking and working through the fair but without my usual overflowing enthusiasm. Perhaps this discouraged mood will lighten as the crowds get thicker, the days pass, and the usual hustle of the fair gathers some momentum.

Aside from this obvious and pervasive mood dampening, the fair itself is largely familiar. 14 new galleries (at least according to our tracking database) are taking part, adding some freshness to the mix, and the crowded photobook area has been redesigned, making it somewhat easier to navigate. Otherwise, most of the usual suspects are in exactly the same spots as in previous years, creating both continuity and a deja vu, been here before, collapsing of space and time.

This summary report is divided into five slideshows of image highlights, roughly organized by physical location in the Grand Palais. As in previous years, I have chosen a single work to feature from each and every booth – this first segment chronicles the booths found in the center of the fair (from the perspective of standing at the main entrance) and each subsequent report (over the next few days) will tackle an adjacent chunk of territory to the left or right. The structure for the information remains same – gallery names/links are followed by notes and comments on the particular work featured, including the artist/photographer name and the price of the work (typically in euros or dollars) where available. 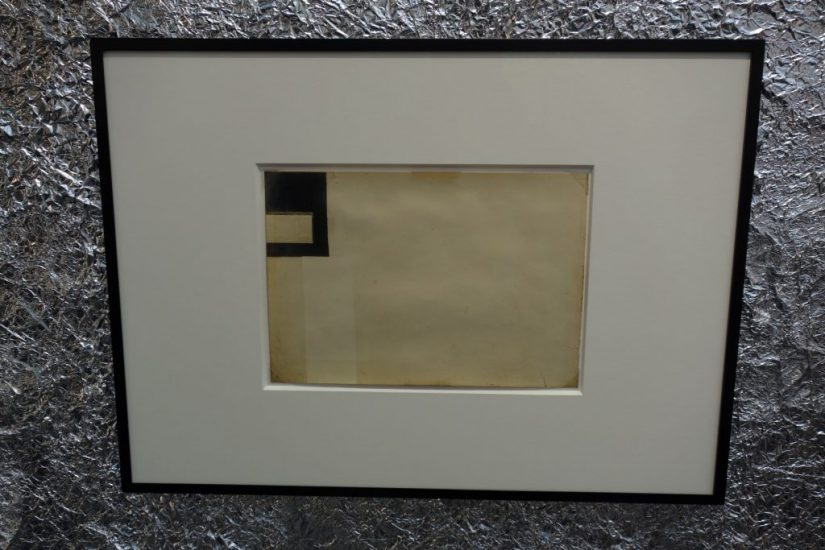 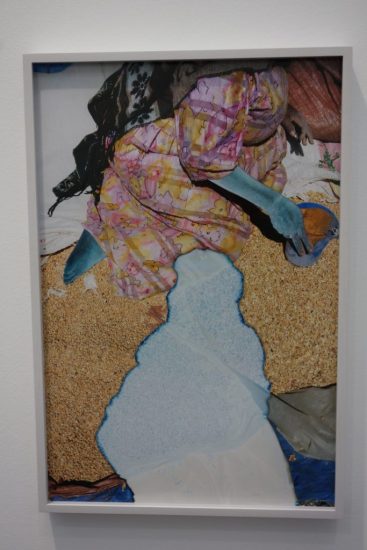 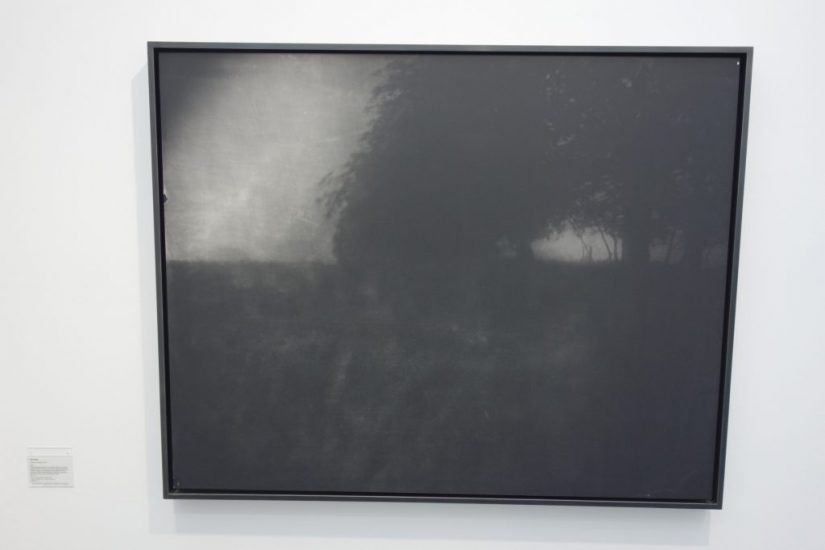 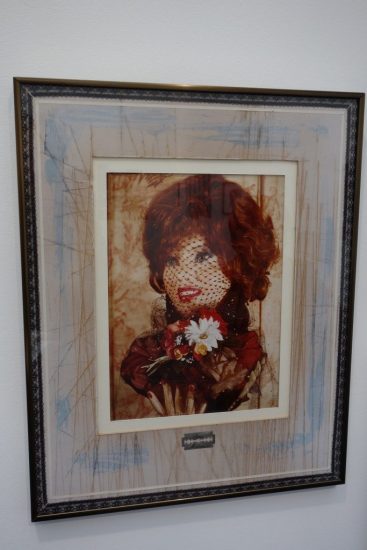 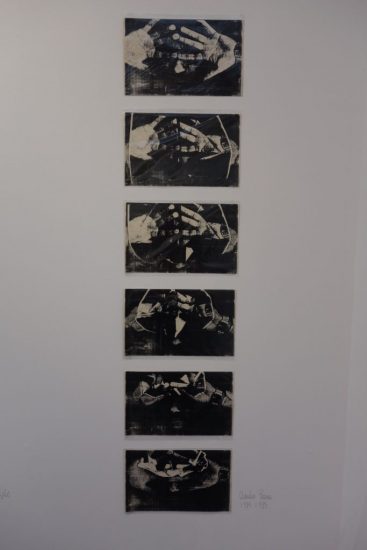 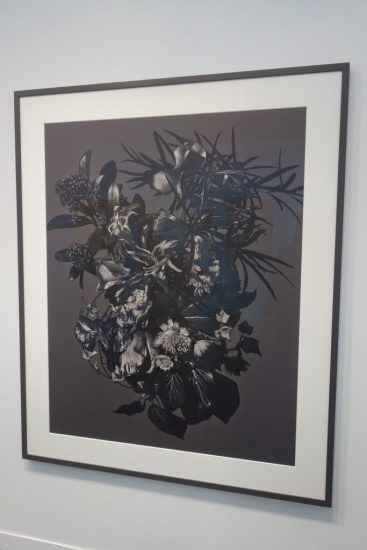 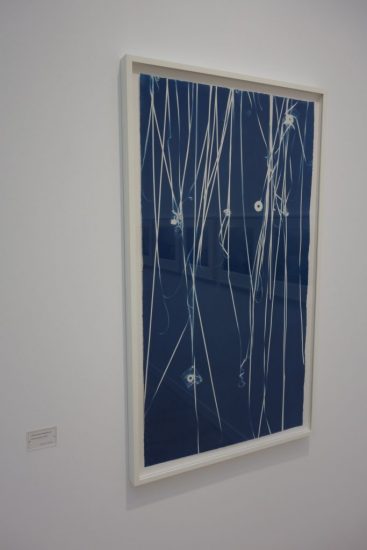 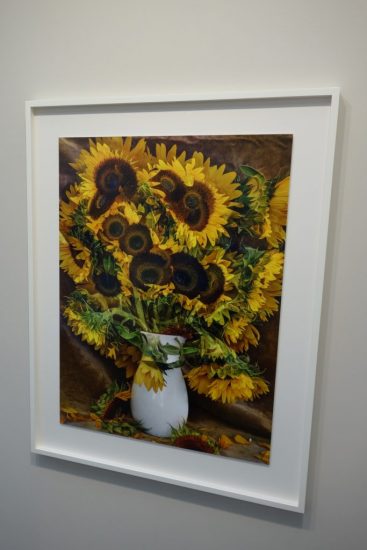 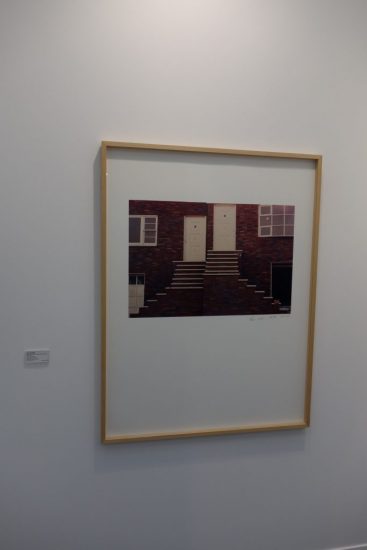 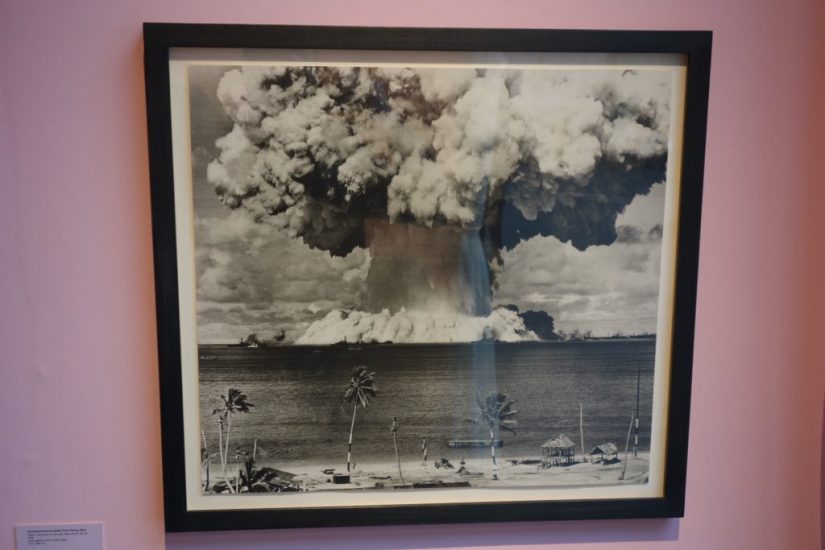 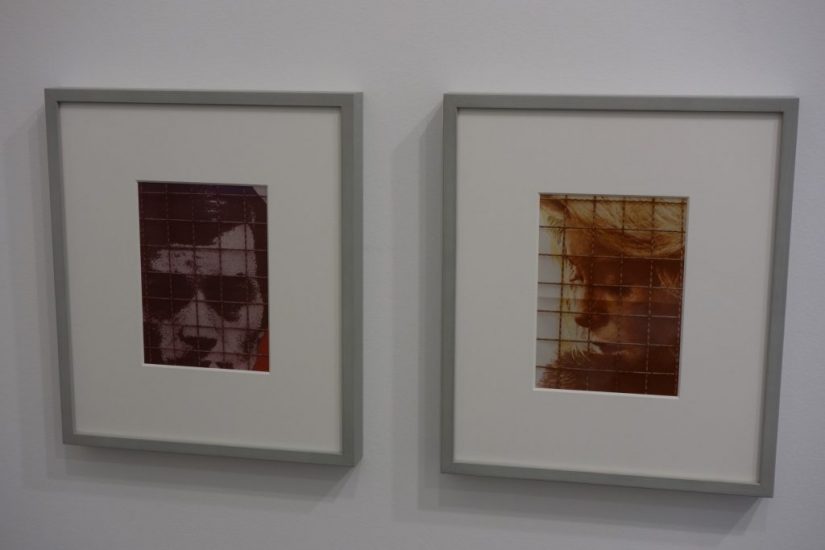 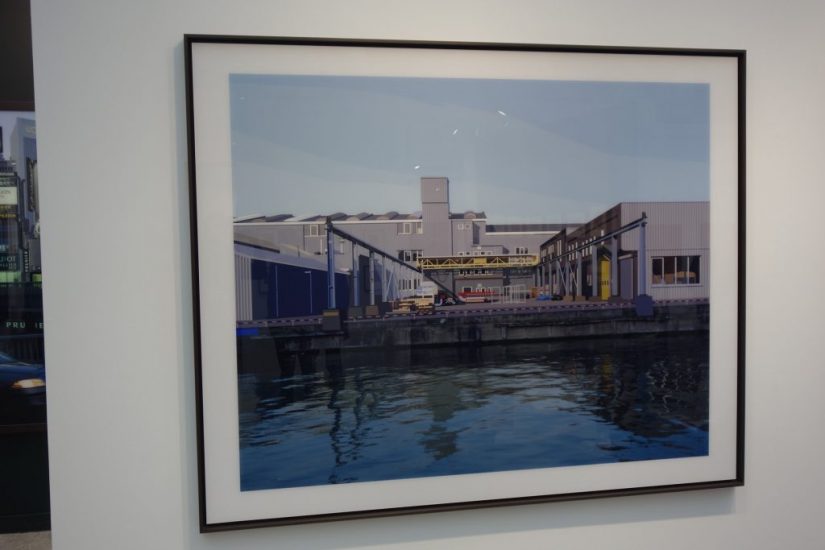 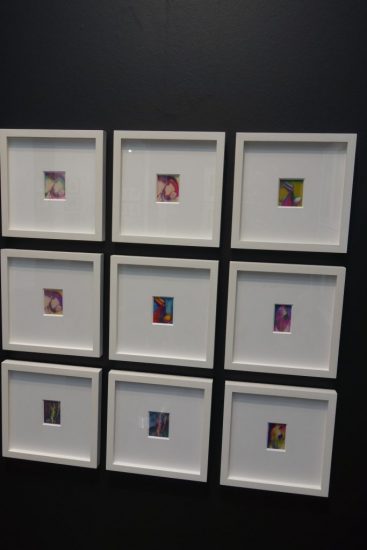 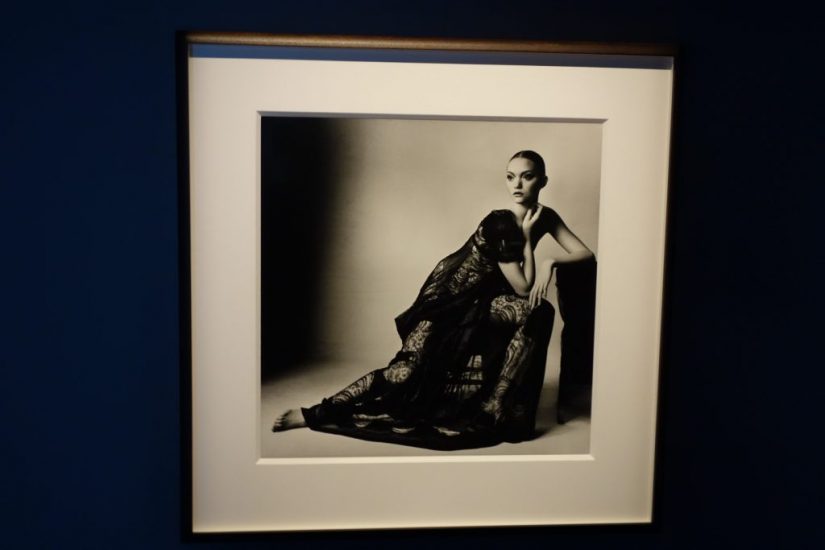 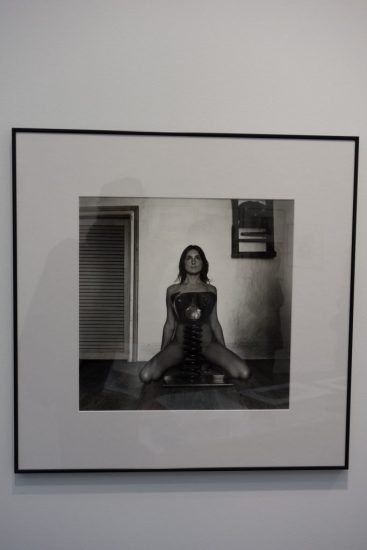 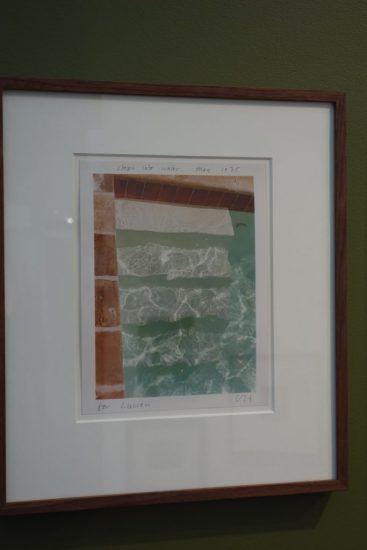 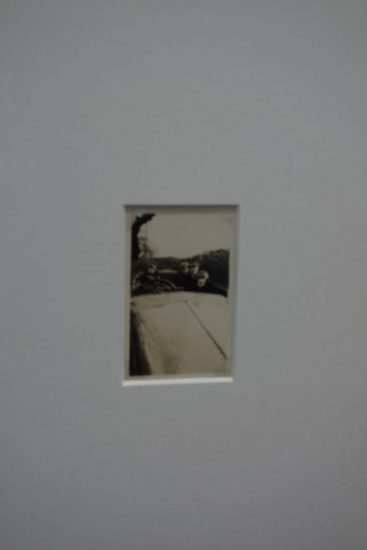 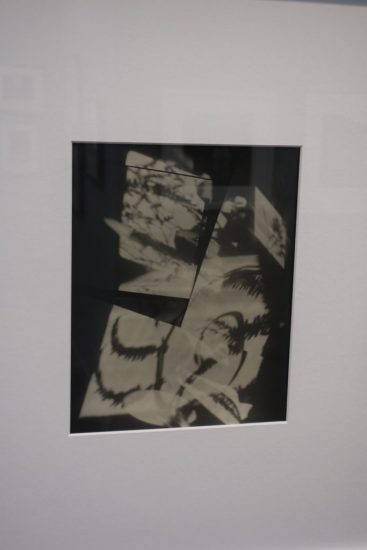 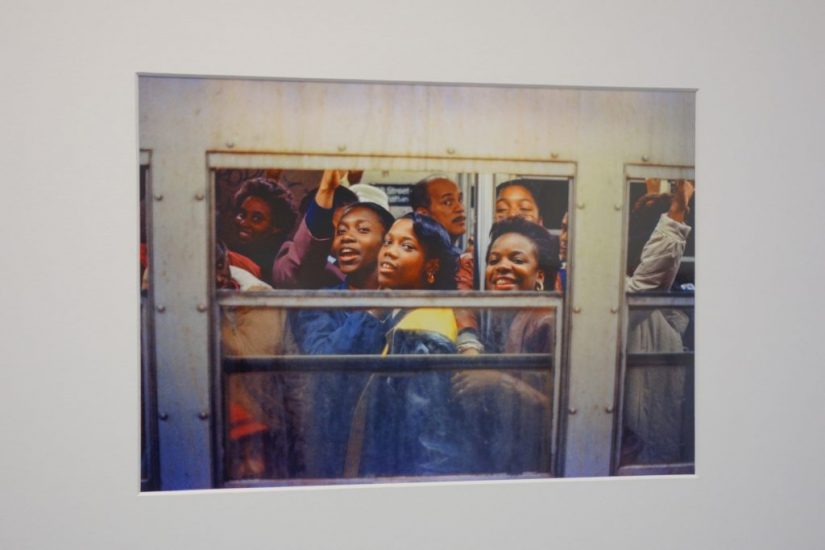 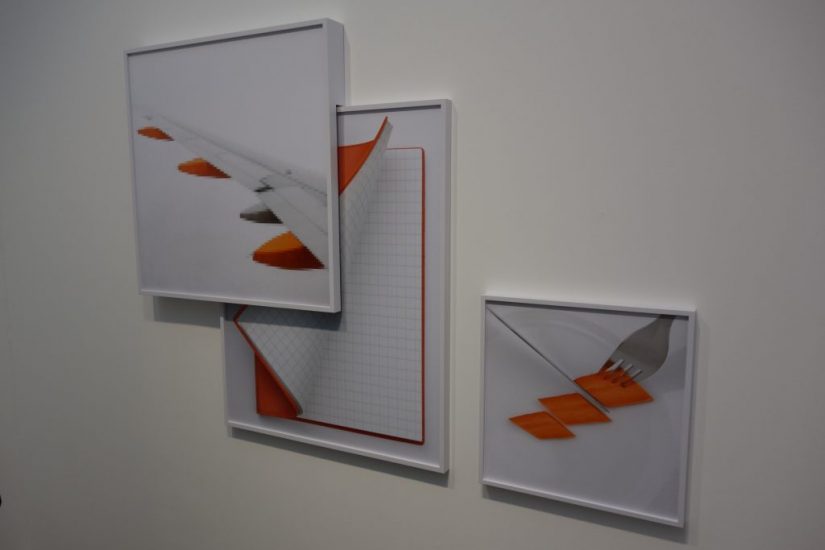 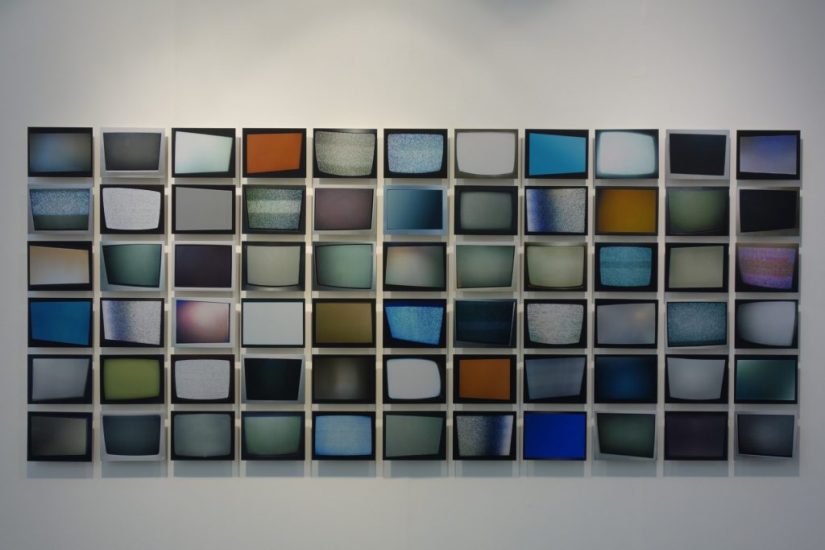 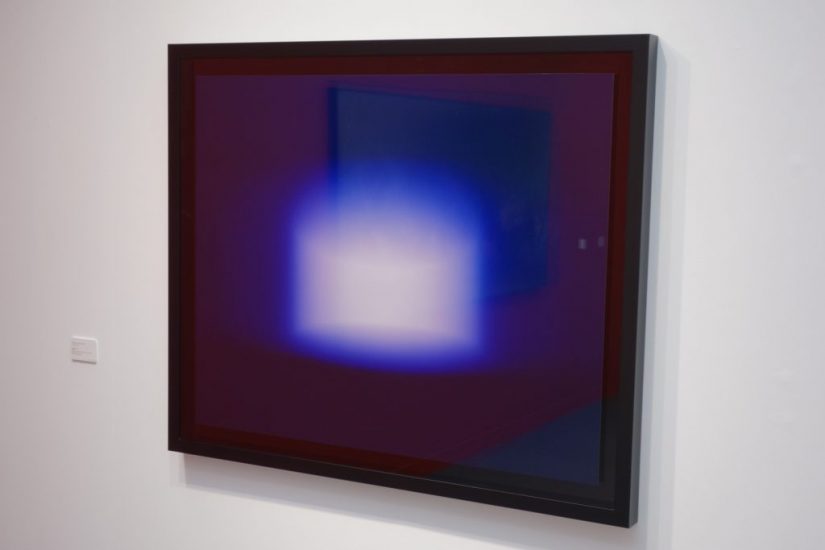 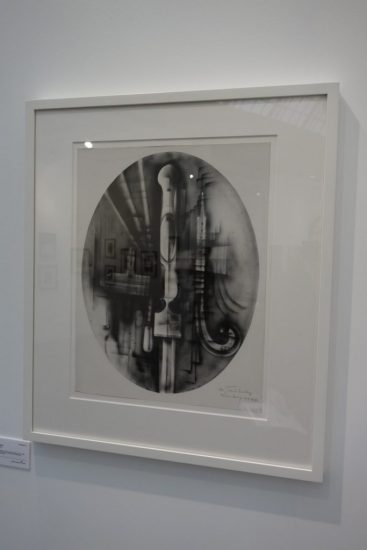 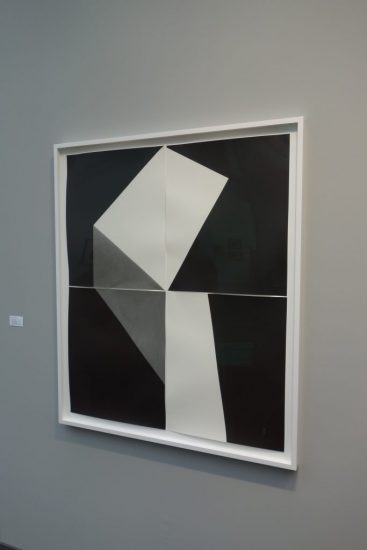 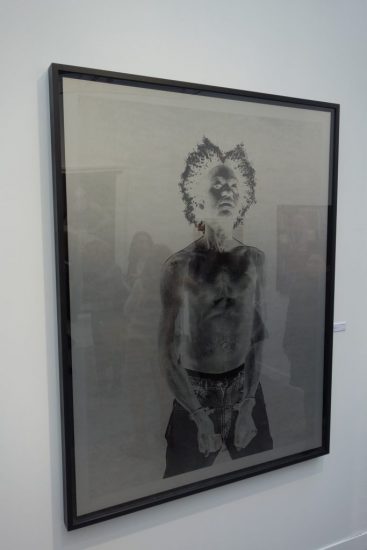 Taka Ishii Gallery (here): For those entering the fair through the main entrance, Taka Ishii’s elegantly crinkled aluminum foil booth walls immediately stand out, their textural stylishness unique among the sea of white cubes. Against this shiny surface hangs a minimal 1950s composition by Kansuke Yamamoto, where the offset corner of a black window balances with a smooth expanse of creamy whiteness. Its sophisticated geometries felt appropriately calming and empty. Priced at €18200.

Stevenson (here): This Viviane Sassen image was tucked into a small interior space, surrounded by larger works by Pieter Hugo. This image continues her deliberate investigation of visual disorientation and uncertainty, from the competing fabrics and dusty blue arm and feet to the encroaching stain of bleached whiteness. Priced at €5000.

Galerie Karsten Greve (here): This booth was a solo show of Sally Mann’s landscapes, pairing her atmospheric Deep South scenes with images from Civil War battlefields. This view of Antietam dissolves into dark murkiness, punctuated by pinprick spots from the old glass plates she used to make the pictures. The vitality of history seems to have dulled with passing time, leaving behind shifting ghosts and shadows. Priced at €38000.

Galerie Christophe Gaillard (here): This 1960s color image by Pierre Molinier stands out from the artist’s more familiar montages and multiplied bodies. The doll’s face has an unsettling surreality that pops with plastic brightness, the lace, the scarred mat, and the razorblade adding to the overall sense of eerie jangling energy. Priced at €10000.

Henrique Faria (here): This mid 1970s photocopy series by Claudio Perna is filled with conceptual intelligence. The artist’s face down hands are slowly revealed to be a paper copy of themselves, which is incrementally crumpled by the real set of hands underneath. Priced at $20000.

Galerie Nathalie Obadia (here): Printed on cotton paper, the surface texture of this Valérie Belin floral is lush and almost sparkly. Seen from the top down, its forms don’t coalesce into something we recognize, and its shadows compete with the actual leaves and blossoms for visual primacy. Priced at €28000.

Fraenkel Gallery (here): Christian Marclay’s unspooled cassette tape cyanotypes seem to get better with age. The works are both delicately loose and improvisationally unruly, and yet so simple and effortless in their execution. Here pulled down tapes by Madonna tumble like a waterfall. Priced at $90000.

Bernier/Eliades (here): While Dan Graham’s 1960s color studies of architectural forms are likely familiar to many, this was the first time I had ever seen one printed at such monumental scale. At this size (printed in 1996), the patterns of bricks and stairs become even more abstract. Priced at €20000.

Daniel Blau (here): Perhaps it was the coincidence of the election news, but this oversized image of a bomb test from US Armed Forces Joint Task Force One somehow seemed to capture the mood of the day. What makes the picture so powerful is its juxtaposition of scale, from the massiveness of the water and cloud explosion to the tiny ships and palm trees dwarfed by its towering size. Priced at €15000.

Mai 36 (here): This pair of gridded faces by Luigi Ghirri felt smartly modern. The pictures capture fragments of posters held in place by wire mesh, the interlocked lines creating squares that recall pixels. Priced at €10000 each.

Galerie Georges-Philippe & Nathalie Vallois (here): This recent factory scene from Alain Bublex provides an update on the use of digital drawing in contemporary photography. The top part of original picture has been overdrawn (presumably in Adobe Illustrator), creating a contrasting interplay between photographic reality and mediated impression/memory. Priced at €24000.

Kicken Berlin (here): These tiny gel abstractions were the first color works I have ever seen by Jaroslav Rössler. Made in the 1960s/1970s by sandwiching together three layers of transparencies, they have a psychedelic brashness, pushing them toward total abstraction. Priced at €7700 each and likely best in groups or sets where the same image repeats through various color transitions and progressions.

Hamiltons (here): While the dim lighting and dark walls in the Hamiltons booth always seem to create a sense of forced lushness, this Irving Penn fashion image (from a 2005 Balenciaga collection) felt entirely at home in such an opulent setting. The image seems nearly perfectly constructed, from the severe styling of the model’s face and the sinuous lines of the lace sheath to the fold of the arms and the balanced areas of blackness created by the shadows and the edge of the furniture. Priced at €30000 and already sold.

Rolf Art (here): This 1983 image by Liliana Maresca (part of a set of three) captures the artist posing with her own sculptures. Her pose feels active and physical, as if becoming a conjoined part of the muscular metal. Priced at $20000.

Galerie 1900-2000 (here): While this booth was filled with iconic treasures from Man Ray (including Noir et Blanc and Le Violin d’Ingres), a mid-1970s portfolio from David Hockney also had its attractions. This swimming pool image, with its squiggled refracted light and pastel color, recalls so many of the artist’s paintings, but leverages the power of photographic seeing to flatten the descending steps. Priced at €5000 as a single print, but the entire portfolio was already sold.

Galerie Alain Gutharc (here): This tiny image by Jacques Henri Lartigue didn’t photograph well, but its charms are evident even in this imperfect reproduction. Goggled passengers sit amid the excitement of the open car, the expanse of the shiny elongated hood adding to the drama. Priced at €5000.

Howard Greenberg Gallery (here): The graceful shadows in this late 1920s Jaromir Funke study give it its vibrancy. The craggy fern silhouettes seem to dance across the paper layers below, creating intricate movement and flowing gestures. Priced at €160000.

Hardhitta Gallery (here): There is contagious joy in this 1980s subway picture by Jamel Shabazz. While other images on view in this booth document the boom boxes and heroin packets of Spanish Harlem, this one seems to overflow with authentic giddiness, even amid the grimy confines of the train car. Priced at €2900.

KLEMM’S (here): Viktoria Binschtok’s elemental orange and white triptych plays with the conceptual components of squares and polygons. An airplane wing dissolves into a pixelized blur, a graph paper notebook is folded over, and a carrot is cut into angled shapes, the three connected by their smart physical interaction of whiteness and color. Priced at €15000.

Bruce Silverstein (here): This large array of TV screen static by Penelope Umbrico investigates a broad spectrum of non-communication, each screen offering an absence. Seen together, the pictures feel like an enigmatic ending, a final point where information is reduced to primal electronic noise. Priced at $60000.

Ingleby Gallery (here): This glowing image from Garry Fabian Miller was made by casting light through colored water. Its misty Rothko-like presence has surprising depth, as if we could we slowly recede into the far away light. Priced at €20000.

Galerie Françoise Paviot (here): This 1919 “aerograph” image by Man Ray has an airbrushed look, its jutting Cubist shards and layers becoming diffuse and tactile. Priced at €30000.

Yossi Milo Gallery (here): Made from 1950s papers designed for military use, this Alison Rossiter 4-piece composition is among the largest she has ever made. Its simple geometric shapes in white, grey, and black feel almost sculptural, the subtle evidence of her dipping process seen in the rippled undulations of the middle tones. Priced at $35000.

Jablonka Maruani Mercier Gallery (here): This powerful self-portrait in handcuffs by Lyle Ashton Harris erupts from the wall with gritty force. Its defiant reversals feel shimmery and raw, a silent protest against shackles of varying forms. Priced at $70000.