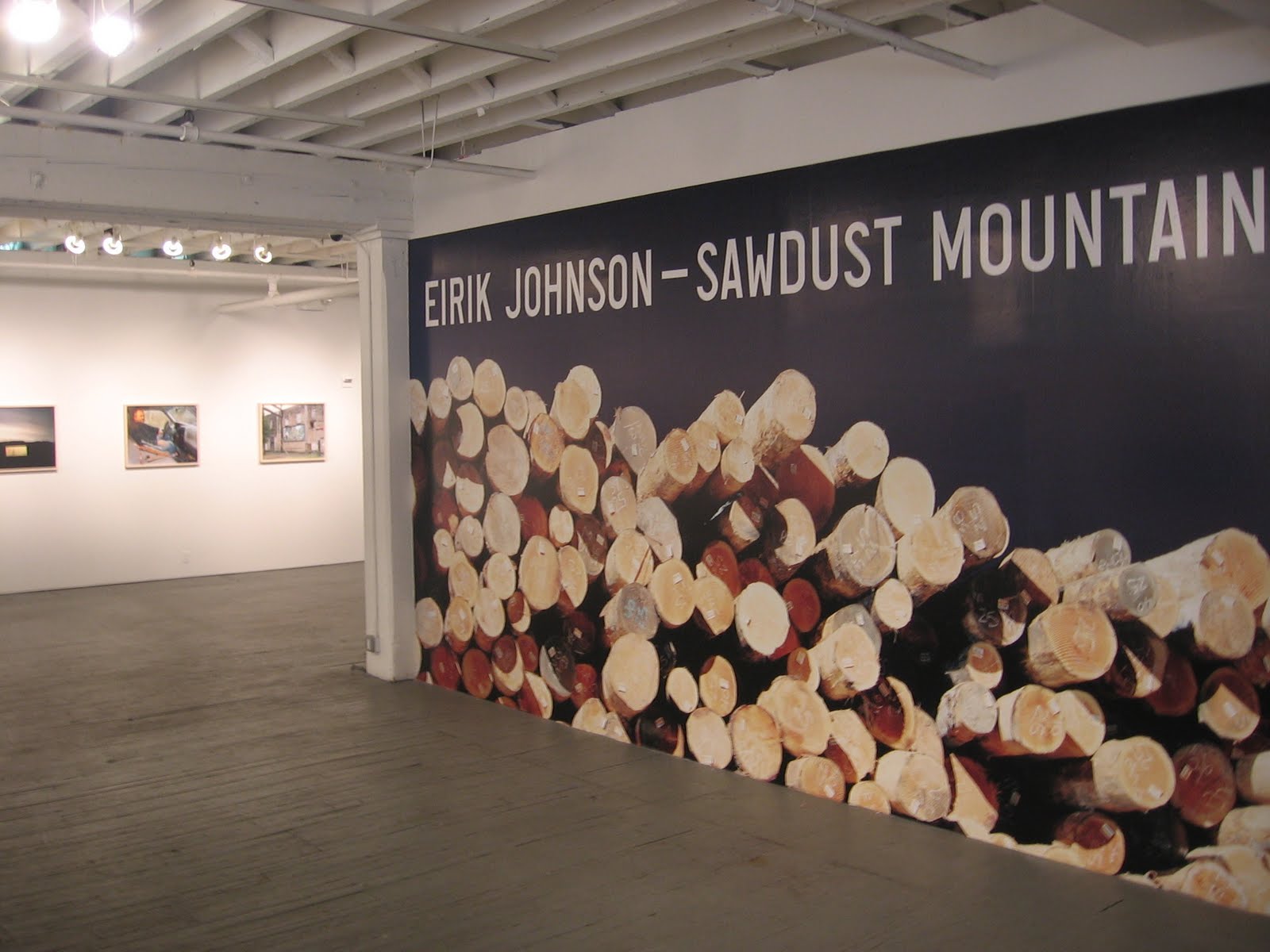 JTF (just the facts): A total of 37 color photographs, framed in blond wood with no mat, and hung in the large gallery space, further separated by two dividing walls. The archival pigment prints come in two sizes 24×30 (or reverse), in editions of 10, and 40×50 (or reverse), in editions of 5; there are 25 small images and 12 large images in the exhibition. All of the works were made between 2006 and 2008. The show was curated by Elizabeth Brown. A monograph of this project has been recently published by Aperture and is available in the shop for $40 (here). (Installation shots at right.)

Comments/Context: Eirik Johnson’s contemporary photographs of the Pacific Northwest expose the gap between the promise and grandeur of the region’s staggering natural resources and the 21st century reality of its depleted and declining industries and rural communities. It’s a depressing and increasingly desperate portrait of the region, where man’s encroachment on the environment seems to have gone too far, forcing the people dependent on timber and fishing to hang in the balance, looking to recover some kind of elusive sustainable equilibrium. If you look back at the early 20th century photographs of Darius Kinsey (review here), the power of nature over man was obvious. Even though tiny loggers with hand saws were pulling down massive firs and cedars that dwarfed them in size, it was clear that the forest was king and we were insignificant interlopers. These people were pioneers and homesteaders, clawing out a rough living from the bounty that surrounded them. Kinsey’s pictures have a palpable sense of romance and awe, with teams of men sitting on beasts they have just vanquished.

Fast forward a century and the scene has changed dramatically. Cut logs are now stacked in huge yards, entire landscapes have been clear cut, and seedlings are grown in greenhouses. The balance of power has noticeably reversed – man is no longer looking up at nature, but is now peering down trying to “manage” it for optimum profitability. The scale has increased dramatically: boards and planks multiply, sawdust piles up, and lumber offices stand ready to organize it all. And yet, the boom has already come and gone, and we’re now left on the other side of the expansion, looking back at what happened and trying to make sense of the lost jobs, the empty fisheries, the crumbling dams and the ecological failure. Stylistically, Johnson is travelling down a thoroughly American road, mixing understated portraits and unexpected landscapes in the same long form project – there are compositional connections to Joel Sternfeld, Mitch Epstein and Alec Soth, as well as tangential ties to other images of the region made by Robert Adams (West from the Columbia) and Frank Gohlke (Mount Saint Helens). Johnson is telling his complex story via the aggregation of many small pieces and vignettes that together paint a bigger picture of life in these communities: grey skies, dead fish, abandoned moss covered houses, truck cabs, hollow-eyed workers, salmon jerky, dryer lint artwork, and a dispiriting array of things for sale (sweaters, firewood, rusty trucks, Star Wars memorabilia, and porn).

What I found most sad about this whole story was the leaden silence that seems to hover everywhere in Johnson’s images. The rain falls, life moves on, the people stay or move away (it doesn’t seem to matter), and quiet envelops everything. Individually, these subtle, often straightforward works don’t shout from the walls, but their collective effect (particularly in book form) hits home with surprising force.
.
Collector’s POV: Since this isn’t a selling show, there aren’t any posted prices for the works on display. Eirik Johnson is represented by G. Gibson Gallery in Seattle (here) and Rena Bransten Gallery in San Francisco (here). His work has not yet become available in the secondary markets, so gallery retail is likely the only option for interested collectors at this point.