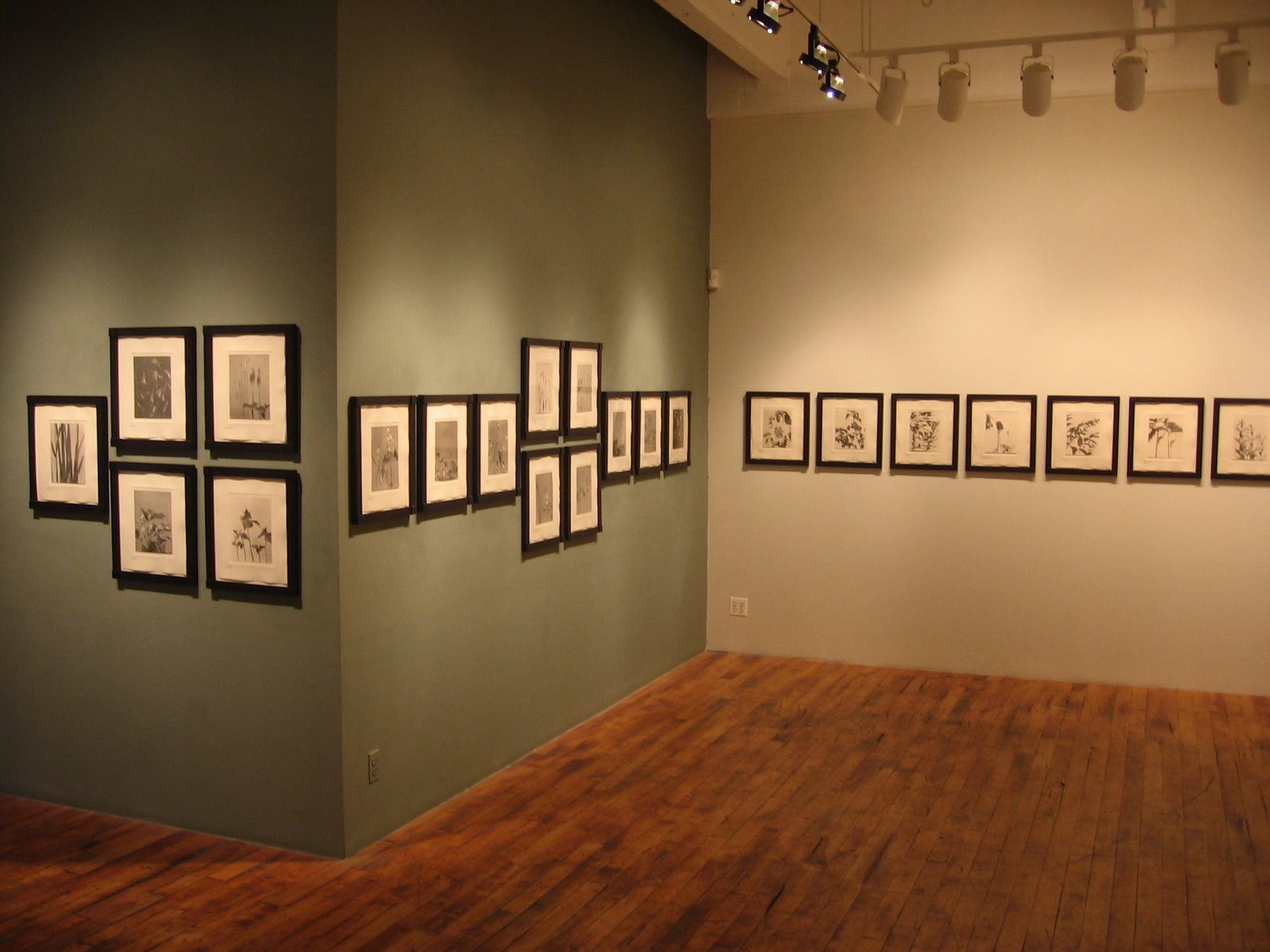 JTF (just the facts): A total of 65 platinum prints, framed in black wood and unmatted, hung in the main gallery space and the smaller viewing alcove, against white and green walls. All of the images are 10×8 and were made in 1914, as part of the 6 volume, 400 image series Wildflowers of New England. (Installation shots at right.)

Comments/Context: For those collectors who focus outside the subculture of floral photography, the name of Edwin Hale Lincoln will be a complete unknown. His only claim to fame is his obsessive project to document the many species of wildflowers found in and around Lenox, Massachusetts in the early 1900s, before the ravages of industrialization and expansion drove them all to extinction. While many of his images are pleasingly decorative, the real reason Lincoln is important is that he was a transitional figure in the history of floral photography. Going back to William Henry Fox Talbot, photographers from the very beginning of the medium have pointed their cameras at flowers and leaves, mostly because many early photographers were amateur scientists and naturalists in their spare time. Throughout most of the 19th century, most floral and botanical images were made in a quasi-scientific or documentary manner, starting with the stunning cyanotypes of Anna Atkins, and continuing on through the botanicals made in exotic lands by Scowen & Co, Fratelli Alinari and many others. (We’ll leave out some of the more decorative floral images made in France during this same period by the likes of Adolphe Braun and Charles Aubry for the sake of brevity.) At the turn of the century, the general approach was still mostly the same, as exemplified by the intimate cyanotypes of Bertha Jaques.
Edwin Hale Lincoln came out of this same naturalist tradition, working in complete isolation, following his own path. But his images however show the first traces of a more pared down, clean aesthetic, in contrast to the prevailing Pictorialism of the times. He placed all of his samples against flat uniform backgrounds, and took up close photographs of small carefully chosen and grouped sets of blossoms, often lined up. Using the platinum process, his images have remarkable tonal quality, subtle variations of grey rather than contrasty black and white. Along with the vegetable and fruit studies (some flowers as well) of Charles Jones, Lincoln’s work makes a bridge from the older approach to the 1920s and 1930s floral Modernism of Karl Blossfeldt, Albert Renger–Patzsch, and Ernst Fuhrmann in Germany and Imogen Cunningham in America, who pared the aesthetic down even further towards crisp objectivity and formal beauty.
So while at first glance it might seem easy to speed by this show as a musty bunch of simple flower pictures, placed in some historical context, Lincoln’s delicate works have surprising relevance to what came later. Collector’s POV: The prints in this show are all priced at $1500, including the frame. Lincoln’s prints have come up for auction from time to time in the past few years, generally selling under $1000. Given our position as flower collectors, it shouldn’t be surprising that we already have two excellent Lincolns in our collection (here), which we purchased from the Lee Gallery (here) some years ago. If we were to select another print to add from this exhibit, it would be Lychnis Abla – White Campion, Evening Lychnis (shown at right), as its all-over composition has more visual interest than many of Lincoln’s usual straight up groupings.