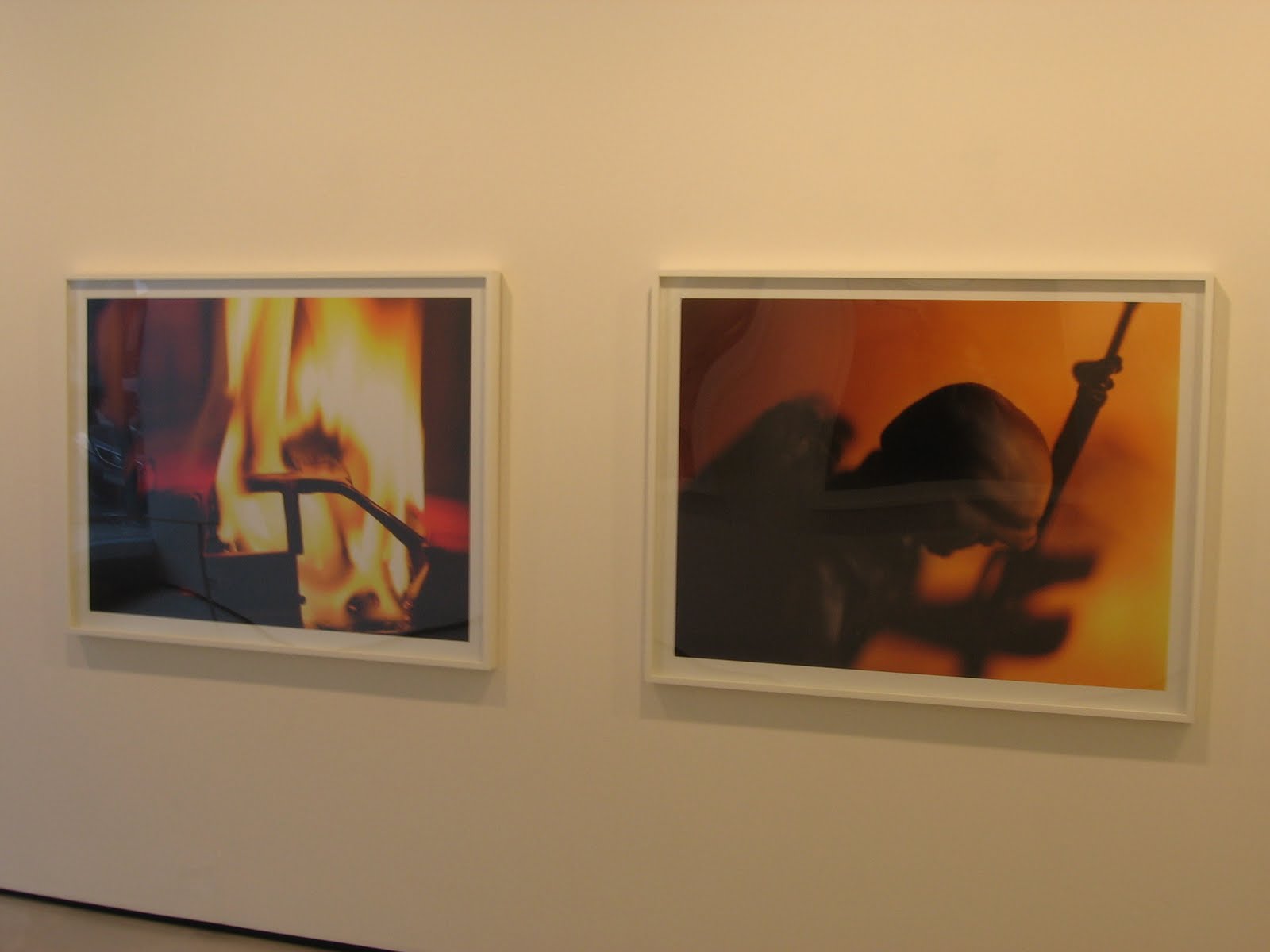 JTF (just the facts): A total of 18 color images, framed in white with no mat, and hung in the front and back gallery spaces. All of the works are archival pigment prints on polyester film, sized 43×56, made in 2008 and printed in editions of 10. All of the images are untitled. A monograph of this project has recently been published by powerHouse books (here). (Installation shots at right.)

Comments/Context: After a number of years of full time conflict in both Iraq and Afghanistan, we have all become accustomed to (some might say overloaded by and numb to) images of war; they appear daily on our television screens, on the Internet, and in newspapers and magazines. Pictures of troops in desert fatigues, toting machine guns, and fighting from Humvees in dusty barren lands or rubble strewn cities and towns have become uncomfortably commonplace, as have the reports of bomb blasts and casualties. 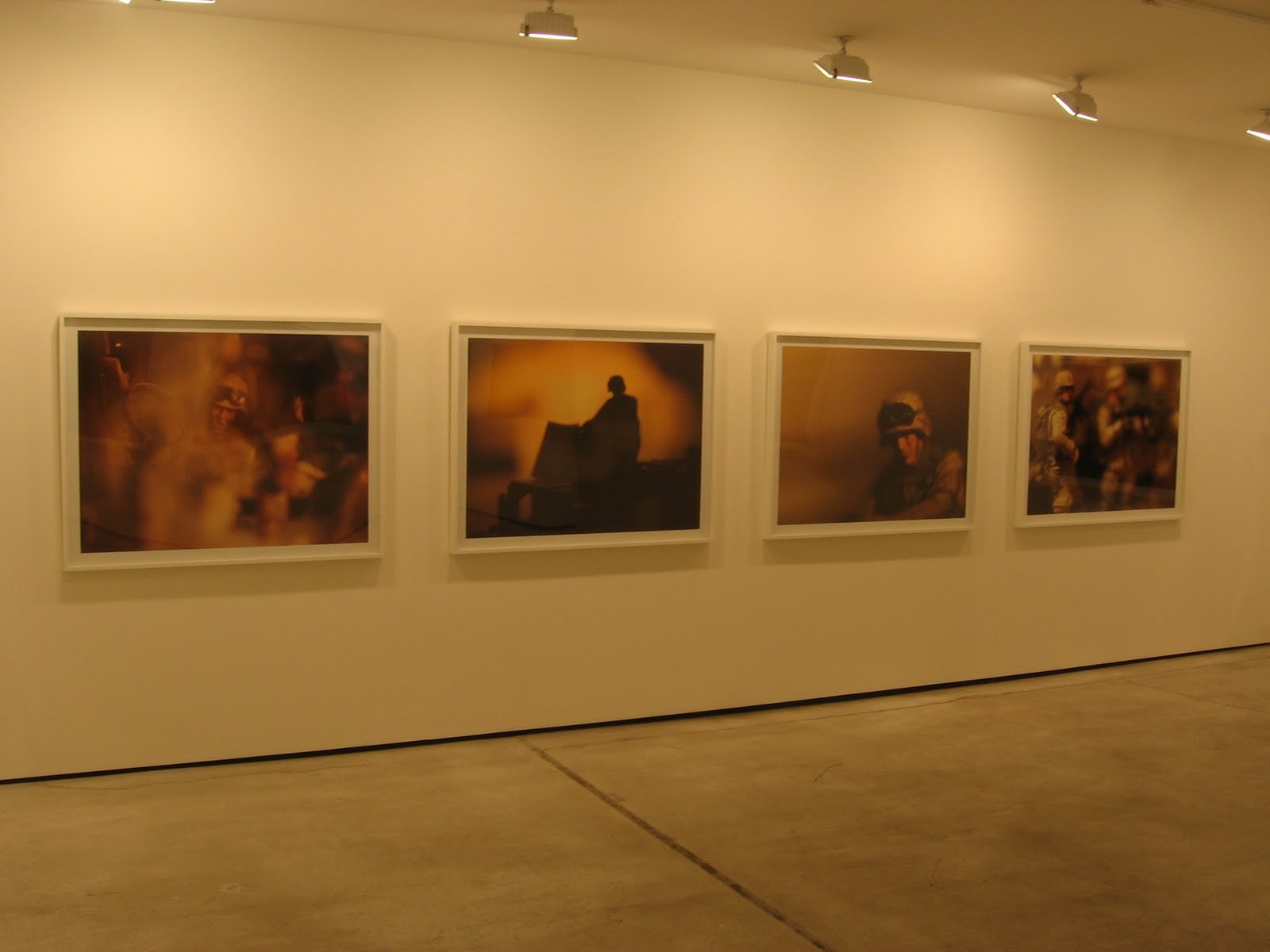 David Levinthal’s images of these wars were not made as an embedded reporter, perilously riding along with a front-line army battalion; on the contrary, they were made in the safety of his studio using the toy soldiers produced as patriotic merchandise for children. His fictional images are however hauntingly similar in look and feel to the works made by our most celebrated photojournalists and war correspondents, creating a powerful sense of dissonance when standing in the white walled gallery.
.
Levinthal has been making images using toys for decades now, so he has clearly mastered the use of cropping, camera angles, shadow and blur to mimic the hectic action and movement he wants to recreate. Most of the images in the show are wrapped in a choking yellow/orange haze, dusty and atmospheric. Within this sandstorm, the fragments and details of war – a bloody head, a car on fire, leaders yelling, a set of goggles perched on a helmet, a group of soldiers piling out of a Humvee ready for a house to house fight, the barrel of a machine gun – are singled out and used to build small, tense, open-ended narratives. A second set of images use the spooky green glow of night vision to pick out the close-up movements of a tank, the silhouette of a rocket launcher, or a disorienting battle in the dark. Squint your eyes and you’re watching CNN.
A scholarly reading of this work might focus on the “disassembly” or “deconstruction” of photojournalism, and on how the ubiquity of media imagery has changed the way we see and process war-time images; indeed, these pictures can certainly be seen as a kind of satire of photojournalism. But I think a related way to read these pictures is to see them as a reminder that fiction can be just as powerful as truth in shaping our emotions and reactions. Sure, these are simplistic and imaginary constructions, but they are oddly successful in tapping into real “memories”. What I like best about these works is that they take the age old argument about truth in photography and turn it on its head; fact and fiction have been satisfyingly muddled, and we are forced to step back and reconsider how the images around us construct our view of reality. 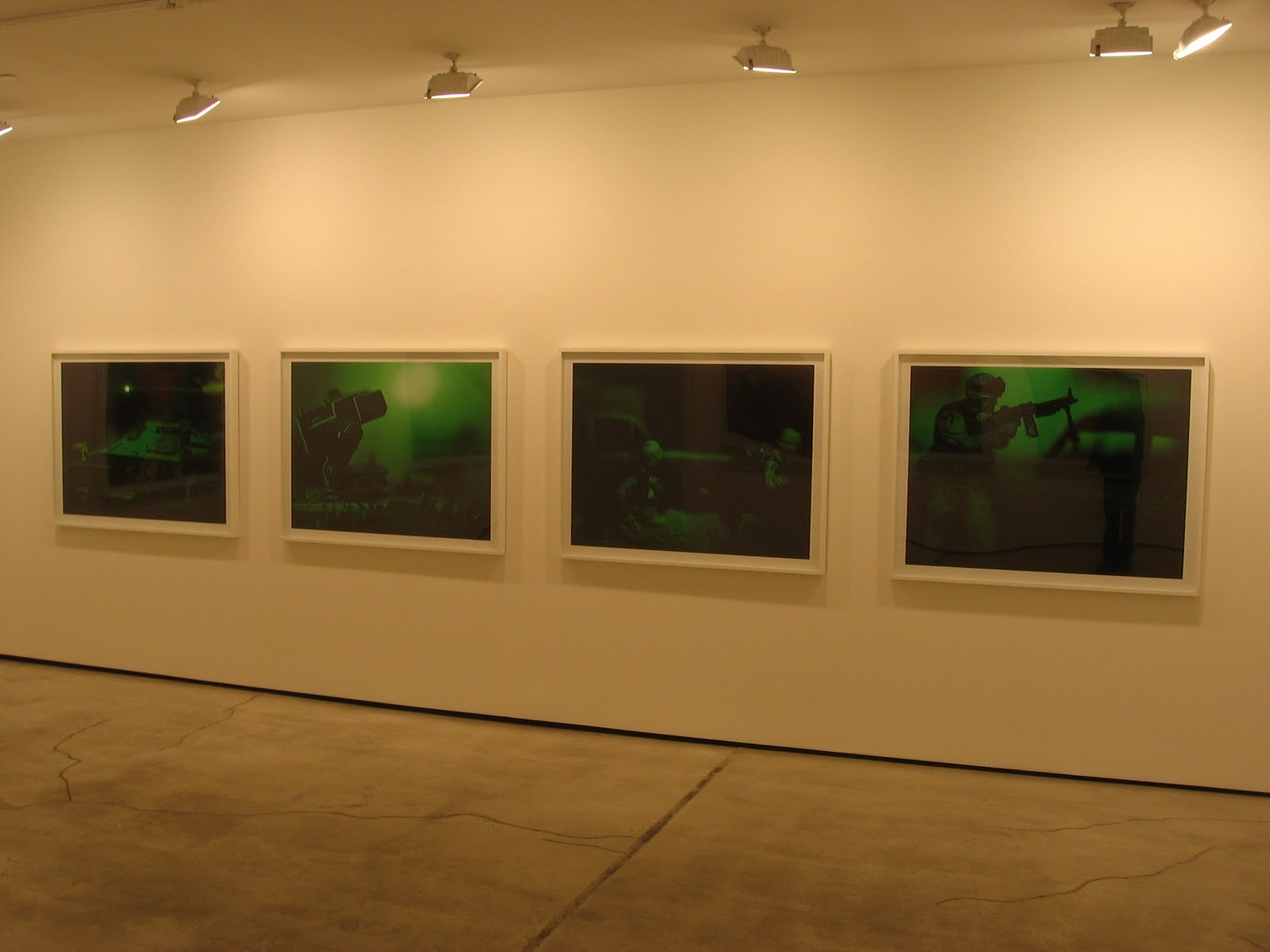 Collector’s POV: The works in this show are priced at $25000 each, which to be honest seems pretty high. Levinthal’s photographs have been intermittently available in the secondary markets of late, with a handful of lots selling each year, ranging in price from $1000 to $10000. Levinthal is officially represented in New York by Gering & López Gallery (here). While these works don’t fit into our particular collection, they will certainly find strong resonance and interplay with other images of the wars in Iraq and Afghanistan.
Rating: * (one star) GOOD (rating system described here)
Transit Hub:
David Levinthal, I.E.D.: War in Afghanistan and Iraq
Through February 13th
Stellan Holm Gallery
524 West 24th Street
New York, NY 10011
Twitter| Facebook|