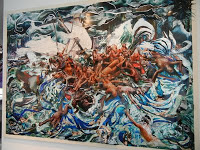 JTF (just the facts): A total of 5 photographic works, generally unframed and either affixed directly to the walls and windows or hung from the ceiling in the single room lobby space. One large photographic collage (measuring 14’6″ by 10’6″) is displayed on an inside dividing wall. A group of approximately 14000 rings connected into long paper chains hangs from the ceiling. The other three works are made of translucent photographic stickers; the two circular works are each 8 feet in diameter. All of the works are from 2011. (Installation shots at right.)

Comments/Context: In recent years, David LaChapelle was been diverging a bit from his fashion and celebrity roots and diving deeper into art historical and religious iconography, albeit updated with a flashy modern sensibility. In his last show, Michael Jackson became took the guise of a saint and Naomi Campbell was the star of a Botticelli restaging. In this lobby exhibit, he updates an icon of 19th century realism, Theodore Gericault’s The Raft of the Medusa (here).
. If you’ve ever stood in front of The Raft of the Medusa in the Louvre, you will certainly remember its immense scale and its punishing savagery. Using corpses from the local morgue as subjects, Gericault created haltingly lifelike recreations of twisted naked bodies in agony. While there is some hope in the desperate waving of a cloth by one of the castaways, I’ve always thought this seemed like the ultimate in futility, as the massive waves crashed over and engulfed the tiny raft. LaChapelle’s version of this same story is layered and collaged swirl of photographic imagery, where cardboard cutouts and watercolor washes add three dimensional Cubist depth to the scene. The difference here is in the nudes; you might just as well call it “anguish in high heels”. The male and female bodies have a perfection to them straight out of a fashion spread (washboard abs, artfully grizzled beards), where the fear looks more staged and the suffering looks a bit hollow. Perhaps his restaging is more optimistic, but the trials and tribulations of all these good looking people lack the raw pathos and visceral energy of the original.
.

The main area of the lobby is covered with dangling paper chains, the kind pre-schoolers make out of construction paper and staples. LaChapelle’s chains are double sided standing nudes, where heads, torsos, and legs get twisted and recombined into an endless connection of anonymous body parts, running the spectrum of light to dark pink. It’s an easygoing, straightforward riff, mostly decorative I think. On the glass side walls of the lobby, LaChapelle has affixed two circular areas of translucent stickers, one pink circle of male nudes and one purple circle of female nudes. Perhaps a little like a stained glass window, they seemed more like a petri dish to my eye, with tiny blobs of tadpole humanity swimming in tight swirling circles.
.

While I didn’t particularly resonate with the end results here, I found some of the process ideas worth thinking about further, including the creating of multi-level surface via the collaging of photographic imagery and the use of transparency to open up the “art against a flat wall” effect.
. Collector’s POV: David LaChapelle is represented by Fred Torres Collaborations in New York (here). LaChapelle’s work is intermittently available in the secondary markets, ranging in price from $10000 to 140000 in recent years.

David LaChapelle: From Darkness to Light
Through September 2