Comments/Context: Concerned photojournalist and ICP founder Cornell Capa died in May of this year, and this exhibition delivers a sampling of his work from a number of his most important and memorable projects. Even in the most tense and confrontational of situations across the globe, Capa seems to have 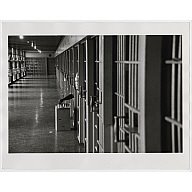 found pauses and moments of quiet expression. His pictures tell complex and under reported stories with a clear humanitarian impulse. While there are few iconic images among Capa’s work and many pictures feel drawn straight from a newspaper, when examined with care and patience in the context of the group of images from a single story as a whole, there is a remarkable consistency of quality and vision. He took on some tough assignments and made them into elegant and powerful pictorial stories. (Inmates playing chess from prison cells, Attica Correctional Facility, Attica, New York, 1972 at right.)
Collector’s POV: A handful of Capa’s best known images (Bolshoi Ballet School and a few others) are routinely available at reasonable prices in the secondary market. This exhibit has some surprisingly beautiful images buried in it; it deserves slow contemplation, rather than a quick glance, even if photojournalism isn’t your passion.
Rating: * (one star) GOOD (rating system described here)
Cornell Capa: Concerned Photographer
Through January 4th
International Center of Photography
1133 Avenue of the Americas
New York, NY 10036
Twitter| Facebook|