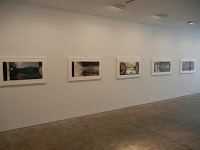 JTF (just the facts): A total of 10 photographic works and 1 video, generally framed in white and matted, and hung in the main gallery space and two of the smaller back rooms (one darkened for the video projection). All of the photographs are archival pigment ink on Japanese paper. 9 of the images are single prints, while 1 is a triptych. 6 of the single images are sized between roughly 24×42 and 27×55, in editions of 12+3AP. The other three single images are respectively 50×41 (edition of 6+2AP), 65×54 (edition of 20), and 76×135 (edition of 6+2AP). The triptych is 85×153 in total, in an edition of 6+2AP. All of the works were made between 2005 and 2011. Many of the images apparently come in additional larger or smaller sizes. (Installation shots at right.)

Comments/Context: Back in 2005, Clifford Ross made what seemed like a traditional landscape image of Mount Sopris in Colorado, complete with dense forests, a reflecting lake, and a lofty peak. What was original about this image was its staggeringly immense detail; using a specialized camera, Ross was able to pack in an enormous amount of visual information to every inch of the photograph, at all depths and locations, much like a Daguerreotpe. The viewer can get closer and closer to the image without losing any depth of detail; as a photograph, it’s a bit of a technical marvel, taking realism in new directions. Fast forward a few years, and Ross has taken that same mountain scene as a starting place for a journey away from realism toward complete abstraction. In both photography and video, he begins with the high density image and then proceeds to fragment it into small shards, particularly one small rectangle of the trees which becomes a motif that gets multiplied, tinted, and reversed into an explosion of hundreds of little squares. If you walk around the gallery in the right order, the color landscape is slowly transformed by this viral beast, strips and squares spun and manipulated, eventually covering the entire surface of the image like a textural blast of colorful confetti.

The video on view takes this idea to another level, aided by a wide variety of computer animation tricks. The single piece of the forest becomes a 3D grid made of layers and towers, which is then spun into a rainbow colored tornado of little fragments, and on and on through various renderings; it’s like the graphics department went a little wild and the turned the photographic image into a high tech TV advertisement using every cool visual tool in the toolbox.
.
To my eye, these images work better as intellectual concepts than they do as photographs. The idea of taking one hyper realistic image and having it become the basis for a riff on abstraction is intriguing, and watching the image morph through various stages and patterns of evolution is perhaps entertaining in a sense of organic random growth, but in the end, the pictures didn’t get beyond clever computer gimmickry for me. That said, for those who are interested in breaking down the edges of photographic visualization via computer rendering, this show is worth a visit for a deep dive into bleeding edge process. Collector’s POV: The works in the exhibit are priced as follows. The six smaller images are either $12000 or $15000 each, while the 50×41 and 65×54 images are $18000 each. Both the large image of Mount Sopris and the triptych are priced at $85000. Again, many of the images are available in additional sizes with alternate prices, so check with the gallery as appropriate. Ross’ work has not been consistently found in the secondary markets in recent years, so gallery retail is still likely the best option for interested collectors.
.
Rating: * (one star) GOOD (rating system described here)

Clifford Ross: From Landscape to Imagination
Through July 29th