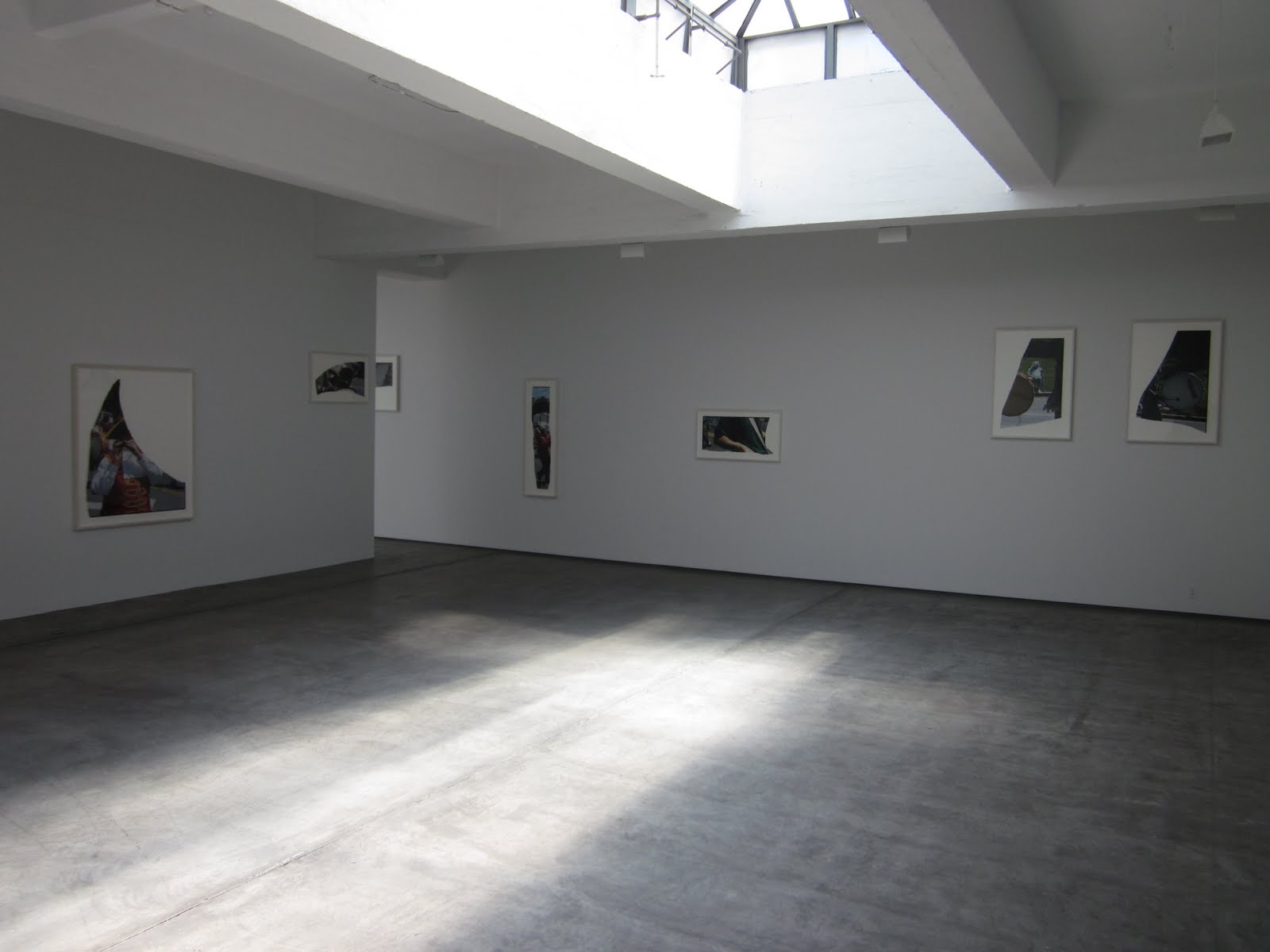 JTF (just the facts): A total of 31 color photographic works, mounted and framed in light wood, and hung intermittently throughout the gallery space, including the entry/reception, the smaller front room, and the two larger back rooms, divided by an interior wall. All of the works are c-prints, torn into a variety of sizes, ranging from roughly 15×18 to 54×46. Each of the works is unique, and the unusual shapes created by the rips have been squared off into rectangular and square shaped frames. All of the works were made in 2005 and are untitled. A catalogue of the show is available from the gallery. (Installation shots at right.)

Comments/Context: Christian Marclay’s art lies in the intersection of music, performance, and visual representation, often mixing these mediums together to find new relationships between seeing and hearing. This show contains a group of Marclay’s recent photographs, taken at a classic American Independence Day parade in Hyde Park, NY. The shots capture the various marching bands, the tricorne hats and period costumes, and the casual crowds of spectators on the sidewalks. What is different here is that Marclay has blown up his snapshots to large size and then torn them into fragments. The effect is to isolate individual features of the parade: the side view of a bass drum, a mallet in motion, cymbals crashing, an elaborate vest, the black gloved fingers of a trumpet player, the chair of a spectator, or a head with a towel on it to keep cool. If you have ever stood and watched a small town parade like this one, you will remember the way the sound of the band changes as it moves past – certain instruments get louder and dominate your hearing/attention, and then they move on and new ones come forward in waves, even though they may all be playing the same tune. First there are flutes, then trumpets, then the thump of the bass drum, perhaps with a break to check out the rest of the crowd across the street. The installation and cropping of these photos does the same thing; it centers your brain on certain fragments and implied sounds, rather than on the overall picture of the parade, encouraging you to jump from one tonal picture to the next.
.
Individually, I’m not sure any of these photographs is particularly exciting or memorable. But taken as a group, in the context of the larger installation, there is something intellectually intriguing about Marclay’s use of visual images to effectively evoke an auditory experience. His pictures make us hear with our eyes, playing back an internal soundtrack based on personal musical memory. Collector’s POV: The works in this show are priced between $10000 and $15000 based on size. Marclay’s photographic works have not yet become routinely available in the major secondary markets for photography, making the creation of a relevant price history difficult. As such, gallery retail is likely the only option for interested collectors at this point.
Rating: * (one star) GOOD (rating system described here)