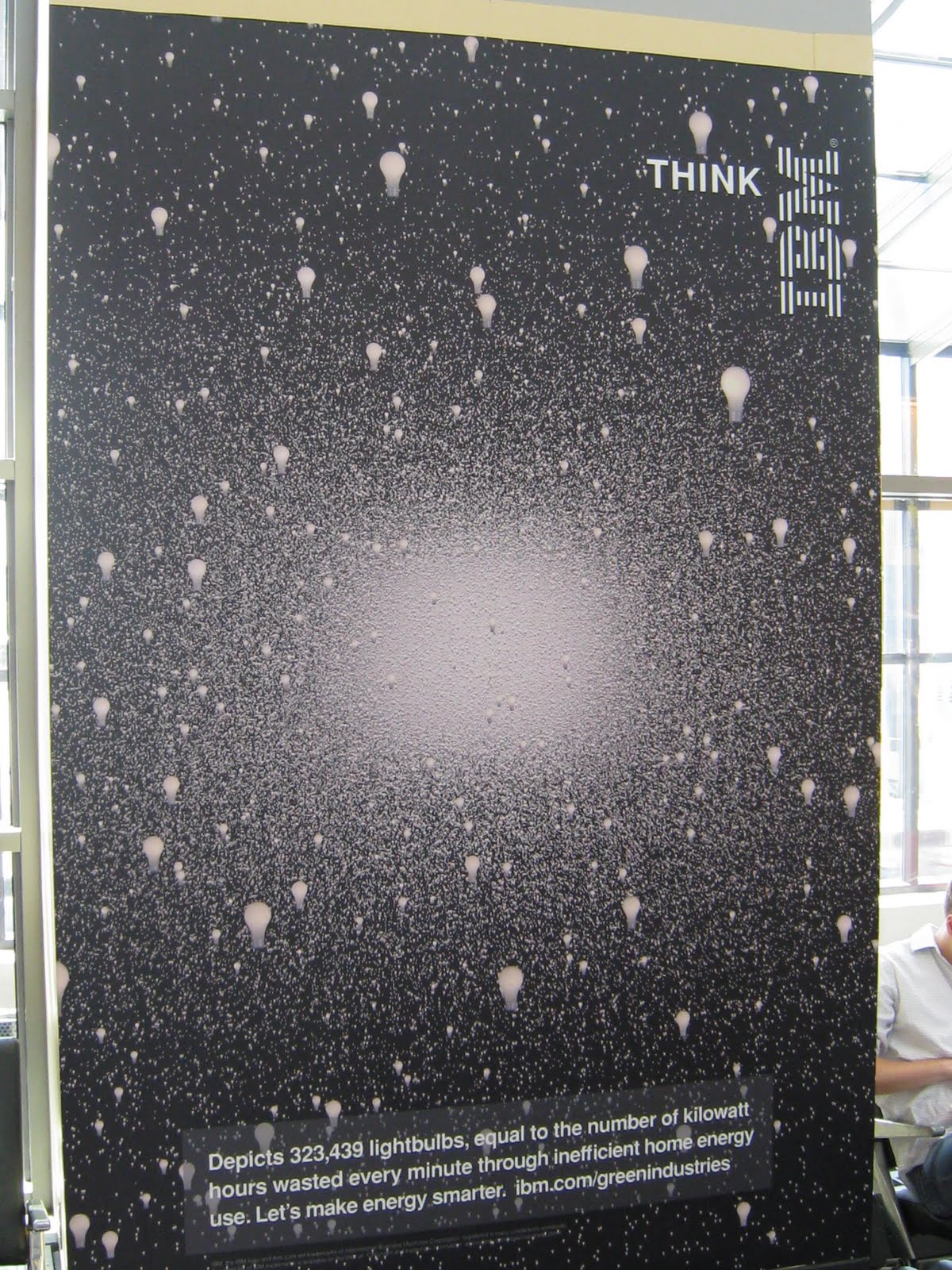 I was recently killing some time in the main waiting room at the Westchester County/White Plains airport. In this area, nearly every surface is covered with advertising, but it was hard to miss the huge IBM ads (one shown at right) pasted to the pillars. As I sat there amidst the crowd, I kept looking back and thinking I had seen the image someplace before. While there was no image credit anywhere on the ad, it finally dawned on me that this was a Chris Jordan photograph, repurposed in a commercial context.

Chris Jordan (artist website here) makes mural sized images that depict mass culture and consumerism in the form of highly dense pictures of repeated forms. He has made images of water bottles, cell phones, cigarettes, packing peanuts, oil drums and plastic bags (among many other items). His work is represented by Kopeikin Gallery (here).

The aim of this post is not to review Jordan’s work, but to consider the questions of fine art photographers allowing their work to be used for advertising. As I waited for my plane, I couldn’t help thinking about what my reaction to the ad would have been if I owned the same image and had it hanging in my home (for the record, we do not own any work by the artist, so this is a hypothetical exercise). By the way, it is called Light Bulbs, was made in 2008, and is normally printed 72×96, not vertical as is the case for the ad. It depicts approximately 320,000 bulbs (unless the image was cropped for the ad), the equivalent of the number of kilowatt hours of electricity wasted in the US every minute from inefficient residential electricity. It delivers its message about the need for change in how we use energy very effectively.

On one hand, the ad exposes Jordan’s work (and viewpoint) to a much wider audience than might normally see it in a gallery or museum. Many, many more people will see the picture as a result of this ad (thousands pass through this particular waiting room each day, and it is likely plastered in many other waiting rooms just like it in other cities), some of whom might be struck enough by the image to track down who the artists was, indirectly leading to more demand for Jordan’s work. If we already owned the work, perhaps it would increase in value or we could secretly feel good about ourselves as people who saw the trend early.

On the other hand, it may be the case that the ad will be more recognized than the image itself. Perhaps people will now visit our home and say, “isn’t that from an IBM ad?” (I will wearily nod yes), or maybe I will continually think this myself as I see it each day, forever stuck in an annoying visual rut. Overexposure may dull its potency.

A harsh way to characterize this ad is that it is a sell out. Perhaps a more realistic view is that it is a way to generate some additional revenue for Jordan from work that already exists, and virtually all artists could use some more cash flow. IBM is a solid brand to be associated with, and increased exposure is generally a good thing for an artist early in his career; perhaps the ad will lead to other exciting opportunities for Jordan’s work that wouldn’t have come along otherwise. All in, such an ad is likely a net positive for Jordan; there is no right answer here, only a recognition that the step from fine art to commerce is a very short one.