JTF (just the facts): A total of 91 black and white photographs, generally framed in black/brown and matted, and hung against grey and black walls in a series of three connected rooms and the nearby exterior hallway walls on the second floor of the museum. The show also includes 2 glass cases containing bound albums of albumen prints. All of the photographs were made by Charles Marville between 1851 and 1878. The exhibit was curated by Sarah Kennel of the National Gallery of Art, Washington. A catalog of the exhibit has been jointly published by the National Gallery of Art, Washington and the University of Chicago Press, and is available for $60 from the Met bookshop (here).

Photography was not allowed in the galleries, so unfortunately, there are no installation shots of this show, aside from the single surreptitious entrance image below. The following details tally the number of Marville prints on display in each room, their processes, and their dates:

First Room (entry to the right)

A supporting group exhibit entitled Paris as Muse: Photography, 1840s – 1930s is on view in an adjacent set of small galleries. 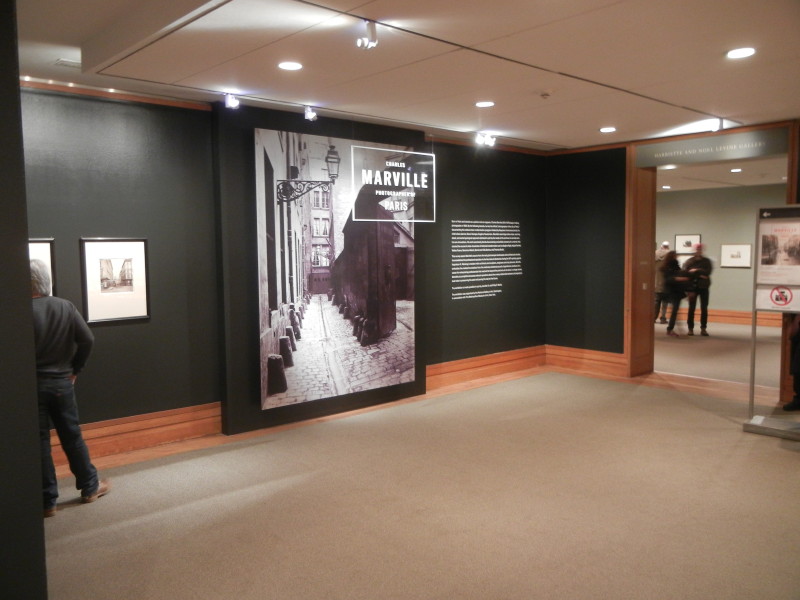 Comments/Context: Prior to this exhaustively researched and grandly produced retrospective, the backstory behind the 19th century French photographer Charles Marville was surprisingly incomplete. Commissioned photographer for the city of Paris in the 1860s and 1870s, he made hundreds of images of both the old and the new, documenting the medieval streets that were being rapidly demolished and the wide boulevards designed by Baron Georges-Eugène Haussmann that were replacing them. But beyond these broad strokes and some rudimentary (and largely inaccurate) biographical information, little was known about Marville, his life, or his art.

Sarah Kennel’s smartly designed retrospective fills in many of the gaps in our collective knowledge, allowing us to get beyond the simplest history and to see the contours of his life more clearly. More importantly, the show provides the ready ammunition for the much needed discussion of Marville’s actual merits as a photographer – is it romantic old Paris that we love or Marville’s vision of it? Was he a camera carrying administrator or an innovative artist?

The complicated answer to these larger questions begins in the 1850s, when Marville transitioned from his job an illustrator to the life of a working photographer. His early salt paper prints from this period show momentary flashes of brilliance: engaging portraits of his assistant Charles Delahaye, hushed snow scenes at the Quai du Louvre and the Ecole des Beaux-Arts, and surprisingly modern cloud and sky studies using the silhouetted skyline of Paris as a foundation. Wider views of the Seine and closer in studies of church sculpture found him refining his eye for in situ architecture, setting the stage for what would come later.

But it’s not until Marville’s first big commission (to document the Bois de Boulogne in 1858) that we really start to see his vision crystalize. This is partially due to a monumental change in technology that occurred right at that particular moment, where the introduction of the albumen print made from a wet collodion negative allowed for a revolution in enhanced crispness and detail. Immediately his pictures changed, becoming much more precise and controlled from edge to edge, with compositions more meticulously balanced. Most of these images of ponds and streams, waterfalls and walking paths still have a hint of romance left over from his earlier days, but the image of the Suresnes Bridge, with the lone figure perched on the edge of the parkland with a gritty smokestack in the distance, points toward something new. Suddenly the picturesque is now subtly clashing with modern reality, Marville introducing some unexpected friction into otherwise bucolic scenes.

The fundamental question we must investigate when judging a mature photographer like the Marville of the 1860s is where he placed his camera; it’s an age old question for photography, but one that is central to understanding what a photographer like Marville was really doing. In his images of old Paris, Marville returned again and again to dead on, straight down the cobblestoned street views, often collapsing the depth of several blocks or telescoping under and through bridges, archways, or other alley portals. His images of the wood planked factories and tanneries around the Bievre river did the same, using the waterway as the central axis, with rooflines jutting in from the sides. This rigorous, almost geometric, approach created movement through the distance of the picture (not just frontal grandeur like the architectural works of Edouard Baldus), following the line of a gutter or curb as it delved deeper into the background, building up layers of information and bringing foreground vernacular signage into bold, front and center prominence; horse carriages, carts, lampposts, and the occasional stationary figure are used like intermittent decorations, bringing life to the deserted, often early morning streets. The consistency of his clean lines across years of picture making tells us this was a pre-visualized methodical plan, not just an accident.

As the Haussman induced changes to Paris gathered steam in the early 1870s, Marville’s photographs became more spare and open, with the now wide streets filled with heaps of rubble or in-process construction, but also laced with more obvious contrast and juxtaposition. Horses mix with trolley tracks, spindly trees compete with new gas lampposts, and shanty town suburbs look out to the modernizing city in the distance – Marville was consciously bracketing the old and new, subtly reminding us of the massive transformations and upheavals that were taking place.

Marville’s cropped down portraits of street urinals, poster kiosks, and ornate lampposts are undoubtedly his most “modern” works; while there are only a handful of these images on view here, a dozen or more would have happily hung in a strict Becher-like conceptual typology, forcing us to recognize the theme and variation details found across the changing city. Seen with an economy of vision, they pare away the chaos of the streets, singling out representative details that would otherwise have gone unnoticed. Compositionally, these are as crisp and precise as any of his broader street views – lampposts are seen in perfect alignment, each set up optimized for light/dark contrast or angled perspective.

Seen together, the evolving variety of Marville’s artistic techniques comes forth with more clarity, and even though not every image in this retrospective is equally engaging or memorable, the exhibit makes a thorough and compelling case that he was doing much more than checking boxes and filling up the historical archive (as some have argued). It’s well researched shows like this one that expand our understanding of figures like Marville, helping to highlight how he was matching his aesthetic approach to the limits of the available technology, continually adapting his eye to maximize his camera’s ability to refine a city scene down to its purest elements. In his pictures, we find an early precursor to photographic Modernism, the very beginnings of formal ideas that would come to dominate half a century later.

Collector’s POV: As this is a museum show, there are, of course, no posted prices. Marville’s prints are only intermittently available in the secondary markets. Recent prices have ranged from roughly $1000 to $21000, with larger albums of images often reaching into the low six figure range. That said, what has come up for public sale may not be entirely representative of his best work, so this price history may not be completely applicable when considering rare/iconic images that might surface in the future.